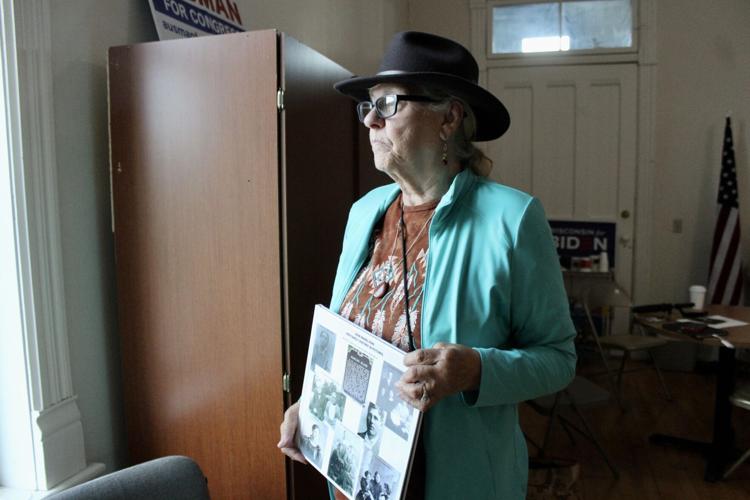 Marge Hebbring, a 73-year-old resident of Chippewa Falls, is a member of the Ojibwe tribe in northwestern Wisconsin. Hebbring is also a descendant of Michel Cadotte and Equaysayway Cadotte. 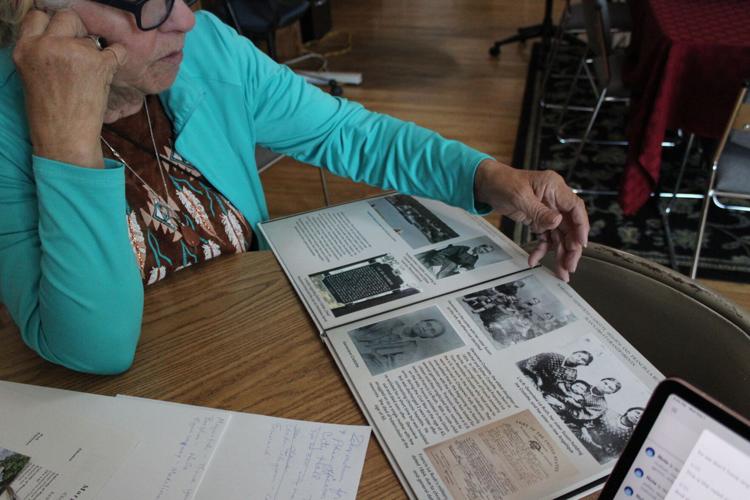 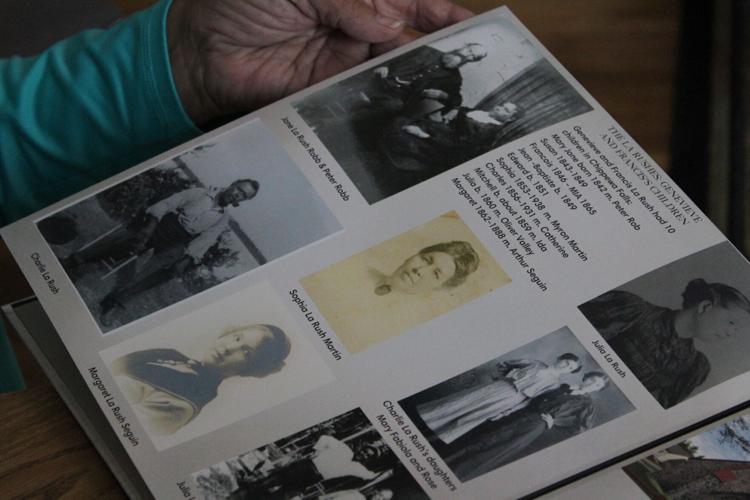 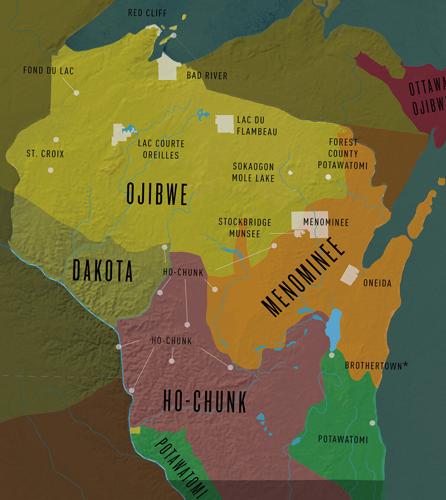 Margaret “Marge” A. Hebbring flipped through the Ojibwe and Cadotte family albums and charts that explain her heritage in all of its splendor. She was eager to lay it all out and walk listeners through the photos, to tell her stories.

Hebbring, a 73-year-old resident of Chippewa Falls, is a member of the Ojibwe tribe in northwestern Wisconsin. Ojibwe and Chippewa are versions of the same word, pronounced differently because of English and French accents.

Hebbring is also a descendant of Michel Cadotte and Equaysayway Cadotte.

Equaysayway was the daughter of the head of the White Crane clan; men from this clan were the hereditary chiefs of the Lake Superior Ojibwe tribe. And after taking the Christian name Madeline when she married Michel, Equaysayway became the namesake for Madeline Island — which was an important trading post at the time and is now a popular tourist destination on Lake Superior.

Hebbring is on a mission to keep this family history and her heritage alive.

Hebbring didn’t learn Native American history in school. She learned it from the elders, family and friends.

“I don’t recall a teacher or textbook ever informing me about half of my family. You know, the Native half,” Hebbring said.

“My mother always told me stuff, but I always thought they were ‘old wives tales.’ I didn’t realize that they came from a whole culture that I was from,” she said.

Hebbring recalls the first time she realized her mother was Native American.

“My grandfather got in a fight with my dad and said, ‘That Indian you married,’” she said. “And I remember thinking, ‘My mother’s not Indian.’ So I don’t even know that I was aware of this heritage until I might have been 6 or something like that.”

Hebbring said she never asked her mother to provide information on her tribal heritage.

“I just didn’t. It was confusing. And a little discomforting, you know?” Hebbring said.

Hebbring used to watch Roy Rogers and the Lone Ranger growing up, hoping to learn more about Native peoples, she said.

“I always looked for the Indian people, but they were always killing them and I didn’t understand that part. I was trying to figure that out,” she said. “When we moved to Des Moines, Iowa, during early school years, the whole neighborhood had like a little tribe. We had bows and arrows that we played with and stuff like that. So just mimicking what we saw.”

It wasn’t until the 1970s and early 1980s that Hebbring’s mother talked about being Native. Among topics was the Occupation of Alcatraz.

From Nov. 20, 1969, to June 11, 1971, 89 Native Americans and their supporters occupied Alcatraz Island. The group lived on the island together until the protest was forcibly ended by the U.S. government.

“What they ended up doing is they got on TV there,” she said. “Before that, the Natives were all in the woodwork. They would say they were German or French or something, but Native wasn’t a good thing. And when they started seeing these young Native men on TV, they’d say, ‘Wait a minute, I’m Native.’”

Hebbring said she was just starting college in the 1980s at UW-Eau Claire when there was a spearfishing controversy in Wisconsin.

According to the Milwaukee Public Museum, during the 1980s and early 1990s, there were many violent clashes in northern Wisconsin over the issue of Ojibwe spearfishing. Violent scenes at boat landings received national and international attention. Sometimes, thousands of white protesters showed up at boat landings as Ojibwe fishermen prepared to spearfish walleye and other species of fish. These crowds often shouted racial slurs, threw things at the fishermen and even assaulted them.

“People talk about why there was controversy, and I believe it was education that fixed a lot of those things,” she said.

Hebbring said she took American Indian Studies and learned a lot about history and culture in college.

“I spent a lot of time up at LCOOU (Lac Courte Oreilles Ojibwe University) listening to elders tell stories,” she said. “UW-Eau Claire had an agreement with (the) Rosebud Sioux from South Dakota. And every once in a while they’d come to us or we’d go to them. So we got to do things like sweat lodges. We got to meet Doris Leader Charge, (who was) later in the movie ‘Dances with Wolves.’”

Hebbring was still in college when offered a job with the Eau Claire school district as the liaison between Native families and the district.

When she graduated from UW-Eau Claire, she got a job in the American Ethnic Coordinating Office, recruiting Native students.

Now, she’s a volunteer at the Chippewa Area History Center, where she can continue to teach people about her history.

Hebbring keeps family history alive by sharing what has been passed down to her from family, friends and other Ojibwe tribal members.

“We had a big fur trading history here. My mother always said the Lake Superior region was like the cradle of civilization for this part of the country because all the trade came from the east into Lake Superior via Madeline Island,” Hebbring said.

In the late 1700s or early 1800s, Jean Baptiste Cadotte — Michel’s father — established a trading post on the Yellow River near modern Cadott.

Some people say Michel married Madeline Equaysayway when she was 60 years old. Their Christian marriage, that is.

“They were likely married in an Ojibwe ceremony long before that,” Hebbring said.

When the pair returned to La Pointe — a post on what is now known as Madeline Island — Chief White Crane decreed that the island should be named “Madeline” in honor of his daughter.

Michel was the first European trader to live on Madeline Island, and over the following years, he gained a strategic alliance through marriage to Madeline. His trading post at La Pointe was a critical center for the trade between the Lake Superior band and the British and United States trading companies.

In the late 1790s, Michel and Madeline’s son, Michael Jr., was born on the Yellow River.

In 1865, the village of Cadott was founded at its current site by Robert Marriner, who built a dam and sawmill on the river and platted the town. Marriner named it “Cadotte Falls” after the earlier trading post.

Hebbring said the region and its expansion was a big deal. Trade was booming and relationships were being forged between Native peoples and European traders.

“All of the Ojibwe were there in the summertime. In the wintertime, when the land froze over, they’d walk across the bay. Each family had their own hunting place on the mainland,” she said. “They used to always go home to Madeline Island in the summertime, because there were other tribes around: the Sioux and the Sac and Fox. And on Madeline Island, you could see everyone that was coming. It was good protection for them.”

In the wintertime, residents and traders were out in their hunting lands, but one family inadvertently started the Lac Courte Oreilles reservation out in the region, Hebbring said.

“A young man and his wife — she was pregnant, and the baby was (flooring) born while they were there,” Hebbring said. “And when it was time to go back to Madeline Island, they didn’t want to leave. Their family was begging them because they knew they were going to be killed if they stayed.

“Well, when they came back in the fall, they were still alive. And so more and more people started staying through the scariest season. And that’s how Lac Courte Oreilles reservation came to be right there.”

Michel and Madeline traded at Madeline Island and in Cadott until the early 1800s. Michel died in 1837, but Madeline lived a while after that.

“She ended up in the Green Bay area because her kids lived there,” Hebbring said. “There’s a Madeline that’s buried on Madeline Island, but it’s not her. My mother always told me that this is not her. She’s buried down by Green Bay.”

Hebbring said she’s proud of her heritage and glad to be a part of passing history along to the next generation. She’s been working on learning the Ojibwe language but said her sister is much better at it than she.

OJIBWE: The most populous tribe in North America; Ojibwe live in both the United States and Canada and occupy land around the entire Great Lakes, including in Minnesota, North Dakota, Wisconsin, Michigan and Ontario. Ojibwe has been called by many names, including Anishinaabemowin, Ojibwe, Ojibway, Ojibwa, Southwestern Chippewa and Chippewa. Ojibwe and Chippewa are the versions of the same word, pronounced differently because of English and French accents.

CADOTT, WISCONSIN: Decades after Jean Baptiste Cadotte, father of Michel, established a trading post on the Yellow River near modern Cadott, the village of Cadott was founded at its current site by Robert Marriner in 1865; Marriner named it "Cadotte Falls" after the earlier trading post.

IN PHOTOS: Marge Hebbring shares family history of the Ojibwe and Cadotte’s

Voyageurs of the Chippewa

Holding on to the past

History in black and white

Hebbring and photo of the Council Oak

Wild rice is sacred to Indigenous peoples in the Great Lakes region. "That manoomin is our brother," Said Ojibwe band member, Dave Bismarck, a…

Marge Hebbring, a 73-year-old resident of Chippewa Falls, is a member of the Ojibwe tribe in northwestern Wisconsin. Hebbring is also a descendant of Michel Cadotte and Equaysayway Cadotte.