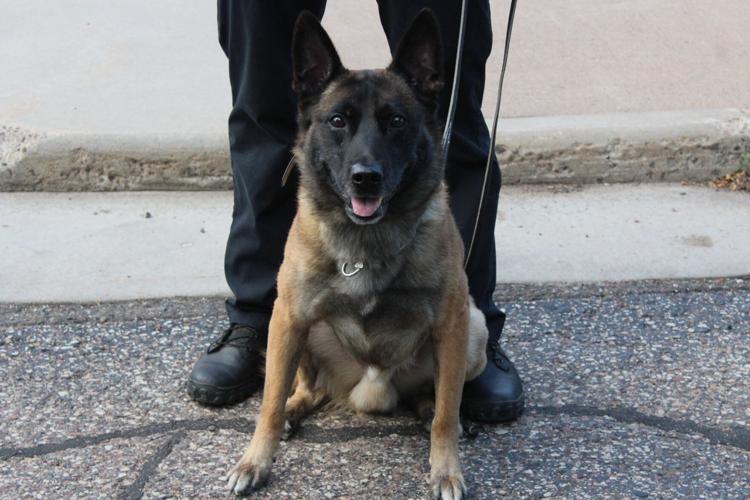 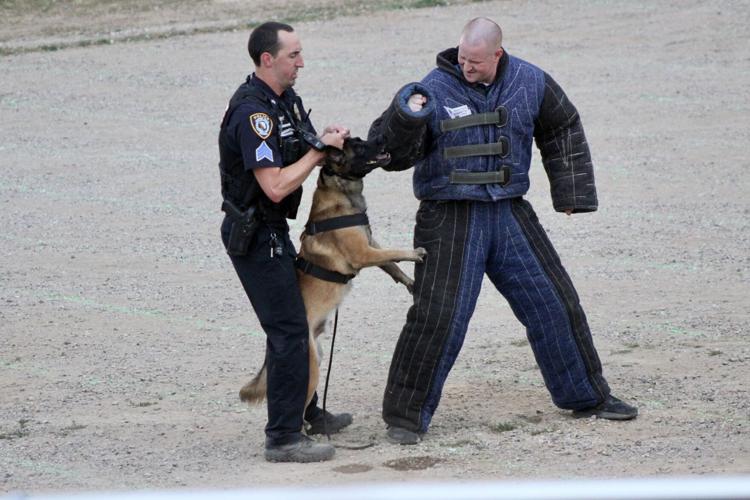 Sergeant McMahon and K9 Leo are a 24-hour-a-day team. Even when off-duty, McMahon and Leo are together. Leo helps McMahon with apprehension and drug-sniffing. During National Night Out McMahon and Leo demonstrated the taking down of a ”bad guy” who was played by School Resource Officer Daniel Downey. 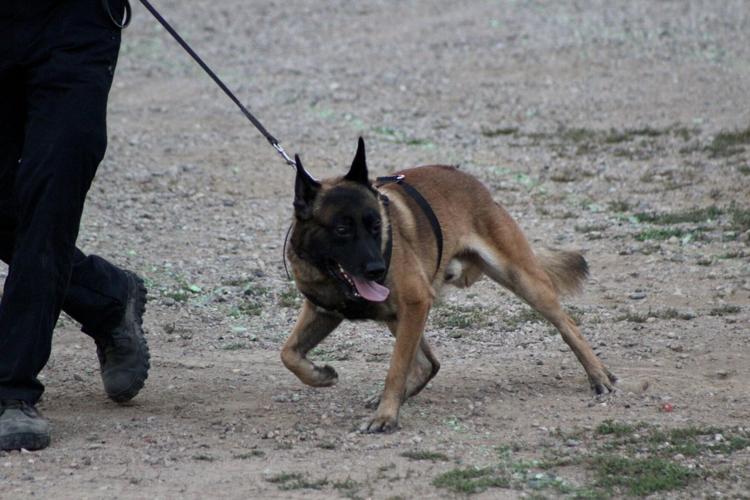 We’re a nation obsessed with dogs and for good reason. They’re pretty amazing.

Working dogs are a breed all of their own.

Working dogs do everything: parachuting into war zones, sniffing out bombs or drug paraphernalia, repelling into disaster areas, finding cadavers or survivors after a kidnapping, flood or tornado, and tracking fugitives or the missing. Working dogs may also assist the differently abled in their day-to-day lives.

Dogs with this level of training and skill set might comfort people after a mass tragedy, defend handlers, first responders and citizens against threats, and they listen to their handlers. That last point is not to be overlooked. A good working dog is nothing if they don’t respond to commands.

Training for working dogs begins at the very start of their life. They often begin learning commands just weeks into their time on earth.

Some breeds are known for their ability to track or retrieve. Others are known for companionship and camaraderie. When it comes to working dogs, the ideal is a combination of excellent temperament, high energy, listening skills and a wonderful nose.

Sometimes people think that certain breeds of dogs are born knowing how to do things, but that is definitely not the case. Like a premiere Olympic athlete, working dogs must hone their skills each and every day.

Dogs need to be able to read a situation, handle a lot of different stimuli and listen to their handlers no matter what.

But there is one half to the equation that is often overlooked and that is the handlers of working dogs. Their dedication should never be in question, and what the average person doesn’t understand is the amount of time and training that goes into handling a working animal.

Police dogs sometimes get a bad rap depending on what an individual’s experience with them has been. But they are, each and every day, just doing their job. They must seek and defend, alert and yes, on occasion, attack bad guys.

“Well Leo, he's a dual purpose canine and what dual purpose means is apprehension as well as drugs,” said Chippewa Falls Police Sergeant Stephen McMahon. “Our training consists of more hours than if someone was just a single purpose dog like if they're just sniffing for drugs.”

Typically trainings for Leo and McMahon involve no less than two to three hours per shift where the two incorporate apprehension work or drug work.

“What that all entails is me having someone in the drug realm hiding drugs for me or me going out there and hiding the drugs that I have, and deploying Leo into the areas and then he works on him finding them.”

“People think this just happens by magic but we work, maybe not all day, but definitely every day. We work. I need him to trust me, to want to please me. He needs to know, both, that I’m in charge — the Alpha — and that I have his back,” McMahon said.

Sometimes the job is pretty dangerous. But the handler and his dog seem to accept that this is part of their duty.

“He and I, well him in particular, are still a part of the Eau Claire SWAT team so we get to go on various call outs,” McMahon said.

McMahon was careful not to overshare information that might compromise the integrity of pending or past cases, nor to boast. But he said he is especially proud of some of the call outs he and Leo have been on in recent years.

“Not to overstate our importance but we’ve made a difference, you know, locally. We do good work,” he said. “We assisted in the apprehension of a subject a couple of years ago so that's been pretty exciting with Leo. He got a lot of treats and toys that night.”

McMahon said that he and Leo do regional canine training every month which incorporate dogs from Douglas County, Baron County and other towns and counties in Wisconsin.

McMahon enjoyed the opportunity he and Leo had to go up into Douglas County and Superior and ride on a boat with the dogs to get them acclimated to that, he said. It’s all part of training in areas that are filled with lakes and rivers.

McMahon was an officer before he took on the extra responsibility of a police K9. Comparing the two, he said, “I think the biggest difference is the calls that we just go to — either for an apprehension tracking or trying to find somebody through a track or doing open air sniffs on vehicles to find drugs.”

The call volume can be lacking or overwhelming, depending on what’s happening regionally. But that’s kind of the point. They’re ready for anything.

“It's nice because it keeps you on your toes,” McMahon said. “It helps pass the time too, because during that daily shift, you're also training him as well and keeping him up on his abilities. I wouldn’t have it any other way. I’m a better officer with this dog.”

IN PHOTOS: National Night Out 2022 in Chippewa Falls

Better than a sprinkler

When Lydia Rubenzer was 11, she begged her friend to attend a two-day cosmetology camp at Chippewa Valley Technical College.

Down with the old: Cobban Bridge dismantling begins

Chippewa County’s Cobban Bridge is now being dismantled, and the bridge replacement project is set to begin soon.

Jim and Donna Mueller were on a trip to Washington D.C. to celebrate their 56th wedding anniversary when they were killed by a lightning strike Thursday night outside the White House.

The Chippewa Falls City Council is planning to send a $1.277 million referendum to voters this fall.

Walmart has sued the village of Lake Hallie, saying its property has been overvalued by $5 million, leading to an excessive tax bill.

EC man, CVTC instructor combine talents to save the bees

BRACKETT – Ted Simpson pulled the beekeeper suit from the trunk of his car, stepped into the all-white jumper, pulled the netted hood over his…

McDonell Area Catholic Schools is pleased to announce two internal hires for the principal positions at its PreK through grade 12 schools.

Sergeant McMahon and K9 Leo are a 24-hour-a-day team. Even when off-duty, McMahon and Leo are together. Leo helps McMahon with apprehension and drug-sniffing. During National Night Out McMahon and Leo demonstrated the taking down of a ”bad guy” who was played by School Resource Officer Daniel Downey.