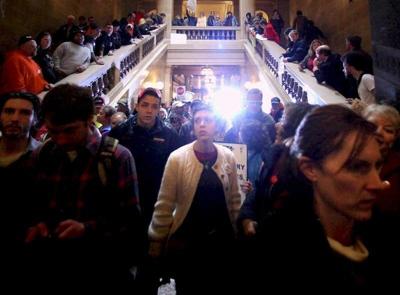 Nobody came out of the Act 10 battle a decade ago looking good.

Not Scott Walker, the former Republican governor who rammed his union restrictions through the Legislature with only GOP votes, triggering massive protests in Madison and division across the state.

Not Democratic senators, who fled to Illinois in a failed and weak bid to stop passage.

Not public sector unions, who tried and failed to recall Walker from office, fueling his national profile and short-lived bid for the presidency.

And certainly not Wisconsin. The images of fierce partisanship, the flouting of good-government rules by GOP leaders, the threats of violence against elected officials of both political parties — all of that tarnished our state’s reputation as a friendly and respectful place with civic pride. Instead of moving “Forward,” which is Wisconsin’s motto, our state seemed to stagger and scowl.

Act 10 forced most public employee unions to pay for their generous benefits to help fix a deep state budget deficit following the Great Recession. The higher payments were justified as part of a budget repair bill. Wisconsin needed to find savings, and voters had just swept Republicans into power, with Walker pledging not to raise taxes. Walker had battled unions and a pension scandal as the conservative county executive of liberal-leaning Milwaukee County. So voters knew the kind of leader they were getting.

But the Republican governor had more in mind than state finances. He all but eliminated collective bargaining for the public sector unions that had favored his Democratic opponents in election campaigns. Walker punished those unions he disliked (leaving police and firefighters alone) by making it harder for them to collect dues and recertify. Under Act 10, for example, earning a majority of votes was no longer good enough to keep a union going. Instead, unions seeking to recertify needed majority support from more than half of all eligible members. That meant if some workers didn’t participate in the vote, they would be counted as opposing the union.

See the whole series: The Great Divide: 10 years since Act 10

A decade later, the Wisconsin State Journal looks back at the historic debate and protests over the controversial anti-union law known as Act 10.

Republicans have enjoyed political advantages ever since. That’s why Walker — who survived the recall and won a second term before losing to Gov. Tony Evers in 2018 — remains a hero to many conservatives, and a villain to many liberals.

To the rest of us, Act 10 isn’t so simple. The early years of Walker’s first term were a dark time for civic life in Wisconsin. Just about everybody knew a public worker, so it was personal. People chose sides and scorned those who disagreed, even neighbors, friends and family.

Act 10 helped Walker balance his budget, and state finances improved. But it also cut take-home pay for public employees. It hurt morale and steered some promising young people into other careers. When it comes to recruiting talented teachers, that’s not good for our children. Benefits fell sharply for teachers, while salaries lagged.

Act 10 gave school principals more freedom to hire the best teachers for open jobs, rather than following seniority rules that give preference to the longest-serving workers. Even in Madison, which has staunchly resisted Act 10’s changes, school leaders have had more leverage to set budgets, change school schedules and diversify staff.

One decade after being introduced, Act 10 is still a mixed bag for Wisconsin. Some of its changes were needed. Some went overboard.

Walker’s biggest mistake was failing to seek broader public support or give any ground. The former governor and his partisan pals pushed too much, too fast in a state that was used to some compromise.

The worst part was the division that infected people’s daily lives. May Wisconsin never experience such a nasty political battle again.

The only Republican senator to vote against Act 10 a decade ago is our guest on today's political podcast, "Center Stage, with Milfred and Han…

Madison and other tardy districts should finally open schools