Gov.-elect Tony Evers said last spring he “can’t wait” to replace his colleagues on the board overseeing the state’s university system.

His razor-thin win means it will soon become a reality, but it will take years before a new Evers-appointed majority emerges on the UW System’s Board of Regents.

A Republican-led Legislature remains in the Capitol, so the amount of power Evers will have on higher education in Wisconsin, at least in the first two years of his term, will likely be substantially less than his predecessor, Gov. Scott Walker, who never led under a divided government.

GOP leaders hinted at curtailing executive branch power before Evers is sworn in, though Senate Majority Leader Scott Fitzgerald, R-Juneau, said there has been no discussion on limiting the governor’s power to appoint Regents.

Over Evers’ four-year term that begins Jan. 7, he will replace at least 10 of the 18 seats on the Board of Regents, but a handful of circumstances — an election win by a fellow board member, a vacancy already on the board and what happens with his own seat on the board as state superintendent of public instruction — could mean Evers may appoint an even greater number of people sympathetic to his higher education platform. It could also mean Walker may move quickly to fill those seats, one that has set a record-breaking long vacancy at nearly 11 months.

As the state’s schools chief, Evers automatically holds a seat on the board. S. Mark Tyler, the Wisconsin Technical College System Board president, also serves as an “ex-officio” member of the board by the nature of his position.

Over Walker’s eight-year tenure, the board has passed policies pushed by Republican lawmakers that left Evers often casting the lone dissenting vote. Stripping tenure protections from state law and eliminating $250 million from the UW System in a two-year budget cycle riled university faculty. They issued a vote of “no confidence” in the Regents and UW System president Ray Cross in 2016.

Through a UW System spokesman, Cross declined an interview request to discuss what, if any, changes he foresees for the System given Evers’ win.

Evers said in an interview before his election victory that resources were the largest issue facing the UW System. He said he will look to “fund the freeze,” a reference to giving more state money to the UW System to offset revenue lost from in-state, undergraduate tuition rates that have been frozen for the last six years, though he didn’t say how.

“Several campuses are facing layoffs and other cutbacks that are impacting the humanities,” Evers said. “And that’s a major concern of mine. The Wisconsin Idea is all about, yes, we want to make sure people are prepared for the workforce, but we also want to make sure they’re good adults and good citizens in society and a lot of that has to do with the humanities and understanding critical thinking.”

Asked if he would seek to re-write tenure protections into state law, Evers said that “somehow we need to revisit it,” so people feel involved in the decision-making process.

Board of Regents president John Behling said last spring in response to Evers’ remarks that he shouldn’t politicize the Regents’ hard work.

Now, Evers will select who replaces Behling because his term expires in May. So do the terms of Regent Regina Millner and student Regent Ryan Ring.

Evers spokeswoman Britt Cudaback said he will continue serving as state superintendent until he is sworn in as governor. State law does not allow the superintendent to designate someone else within the department to serve as Regent.

It’s unclear who will take Evers’ seat after Jan. 7. Evers has not yet announced if he will call a special election or appoint someone to serve out his term, which ends in 2021.

Another Regent, Republican Bryan Steil, defeated Democrat Randy Bryce for U.S. House Speaker Paul Ryan’s seat in the state’s 1st Congressional District. Walker appointed the Janesville lawyer to the board in May 2016 for a term that expires in 2023.

Campaign spokesman Andrew Iverson confirmed Steil will step down from his position before he is sworn into Congress as early as Jan. 3.

With Steil’s seat open, Walker may move to fill it with another Republican before Evers takes office. And an existing vacancy on the board may open up another possibility for a quick appointment by Walker.

Lisa Erickson, the second student Regent, was appointed to the board in May 2016 and had a term set to expire in May 2018. However, she graduated and then resigned from her seat Dec. 14, around the same time media reports indicate Walker’s office sought students to apply for the seat.

Asked again post-election, Hasenberg offered no timeline for when the position would be filled, no confirmation on whether Walker would fill the seat before he leaves office, no explanation for why the position has been open for so long and no information on the number of applications received.

As of Friday, there had been no appointment for the student Regent seat left unfilled for 331 days, setting a record for the longest vacancy on the board, according to a UW System database of board service.

State health insurance pool for schools could save money, has bipartisan interest

The case resulted in a $22.5 million payment from a state malpractice fund.

Two Sheboygan teenagers died in a head-on crash involving their car and a semi-trailer truck in Columbia County on Wednesday night, the Wisconsin State Patrol reported.

What's the buzz? Wisconsin cicadas biding time before next emergence

Wisconsin is home to just one brood of cicacas, which last emerged in 2007. Their next appearance is scheduled for 2024.

Adding residents ages 12 to 15 to those eligible by next week, as expected, could boost demand again.

The Republicans visited a section of the border in Texas.

Evers said last week he was still awaiting federal guidelines on how the stimulus could be used, but hoped to provide an update to the budget committee in the near future.

Madison area wedding venues begin to reopen with relaxed restrictions, but the pandemic has taken a toll

"If we have to reschedule or cancel any more events, especially in the next handful of months here, it would be pretty devastating," said Ben Martinelli, who opened The Eloise near Mount Horeb with his wife, Stacey, last August.

The Kenosha Police officer who shot Jacob Blake was suspended for three days by the Police Department after the gun he was issued following the Blake shooting was stolen, a Milwaukee TV station is reporting.

Center Stage: The politics of Aaron Rodgers vs. the Packers

On this week's political podcast, Milfred and Hands highlight how politics shapes our views of the MVP quarterback's controversial standoff and potential split with the Green Bay Packers. 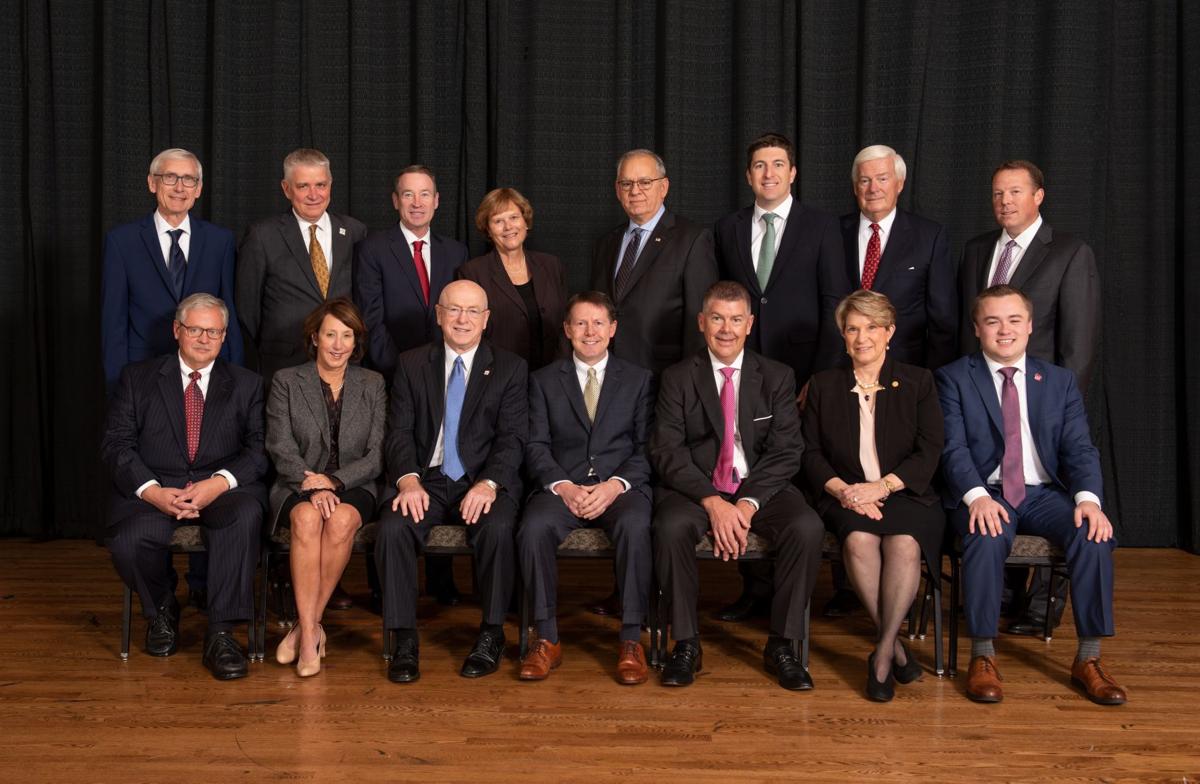 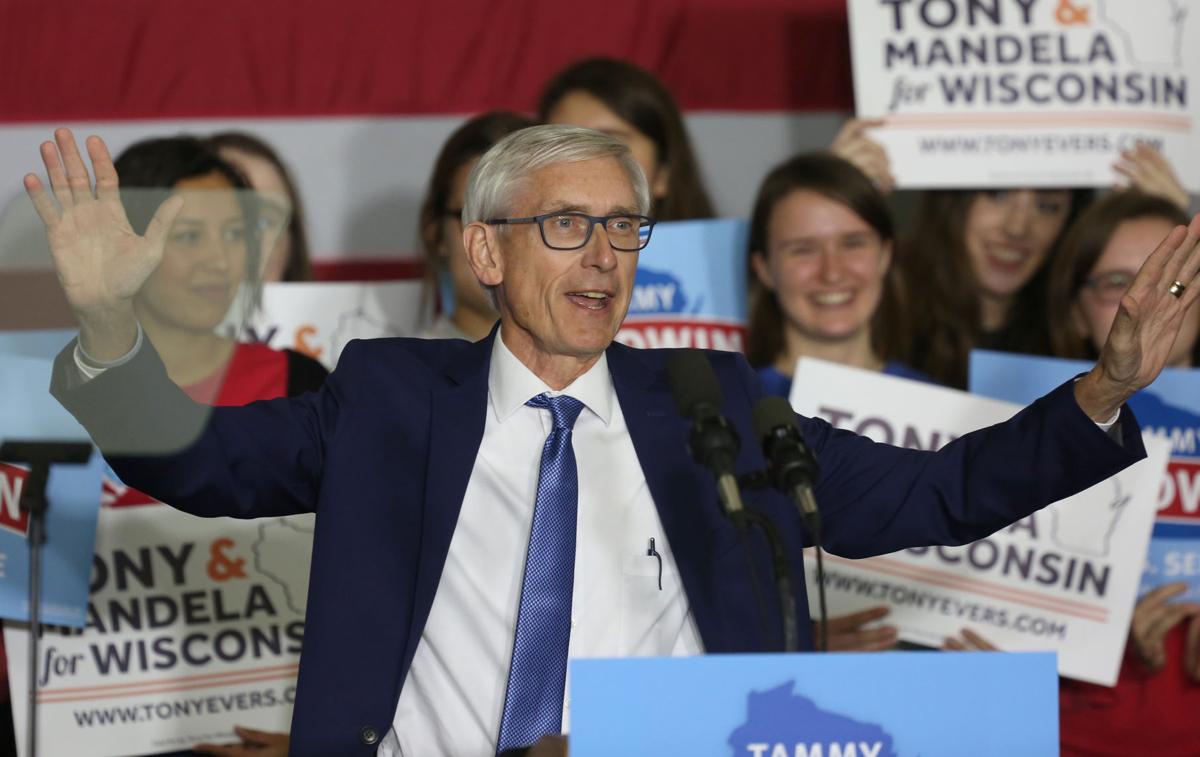 Gov.-elect Tony Evers earlier this year on the campaign trail.