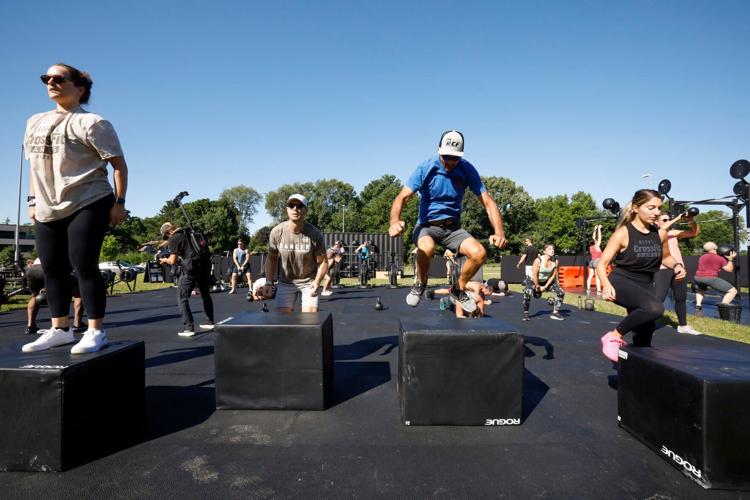 Spectators at the CrossFit games can complete their own workouts, all while top athletes compete at the Alliant Energy Center and an adjacent field. 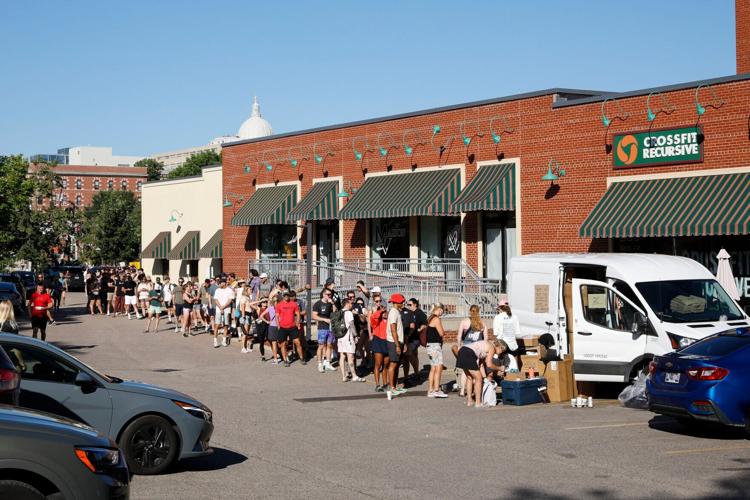 Dozens of athleticwear and nutrition-focused vendors were on scene at the CrossFit Games, where spectators shopped between events.

In 2012, Nathan Alexander turned on the CrossFit Games for the first time.

After watching the athletes compete in a number of events that combine weightlifting, cardio and other sports — the competition promises to find the "Fittest in the World" — he began working out in his parents' garage in Danville, Indiana.

He liked it so much, he started working out at a CrossFit gym, became a trainer — and then bought the gym.

This week, 10 years after encountering the games on his TV, he came to his third CrossFit Games at the Alliant Energy Center, watching the athletes he admires and embracing the community he has come to know.

"CrossFit unites us," he said. "It's a common denominator that brings us together … that shared suffering."

Madison has hosted the final stage of the games since 2017; last year, the games drew more than 57,000 spectators.

The games are the culmination of multiple rounds of qualifiers that begin with a worldwide open competition including 293,805 athletes and teams from CrossFit gyms around the country, according to CrossFit.

After two to three more qualifying rounds, only the top 40 men and women, top 80 teenagers, top 40 teams and 240 "masters athletes" over the age of 35 qualified for Madison.

The games look and feel like a fitness Olympics, featuring an opening ceremony with flag-bearers and an athlete's village in the adjacent exhibition hall. But unlike most other athletic competitions, many of the events are not revealed until the games begin: "Athletes train year-round for a competition that is almost completely a mystery," according to the games' website.

In one event dubbed "Bike to Work" on Thursday, athletes completed 75 toes-to-bars — bringing their feet to the top of a pull-up bar while hanging — a five-mile bike ride, 75 pull-ups and a second five-mile bike ride, with a time cap of 50 minutes. Another event called for a previously unseen "double-under crossover," instructing athletes to hop over a jump rope twice with each jump, while crossing the rope in midair.

Chloe Davis, 19, from Greenville, South Carolina, said watching athletes learn the new movements with little time to spare is her favorite part of the games.

"With new skills, it's neat to see plans of attack," said Ethan Snyder 29, from Flaherty, Kentucky. "Following a rep scheme, or adding in a planned rest."

"The new moves, it's throwing everybody off," said Hannah Newcomer, 18, also from Greenville, who just started CrossFit workouts this year after watching the games on TV in previous years. "I'm afraid they're going to start making me do it."

Newcomer and Davis came to Madison with Davis' family. Davis has done CrossFit with her family since 2015, she said. The pair came to the games in the hope of seeing the athletes they've been following online, Newcomer said.

"You just aspire to be as fit as them," said Ashley Leigh, 34, from Aiken, South Carolina. She and her husband, Tim, also own a gym.

Some of the athletes carry immense star power. On a wall, a photo of Tia Clair-Toomey, an Australian athlete who has won the games five times, looked out over the crowd. Outside of the Alliant Energy Center, the faces of past winners encircled the arena's upper deck.

And when Mallory O'Brien, an 18-year-old from Iowa, emerged in Thursday's opening ceremony carrying the American flag, the loudest roar of the afternoon erupted from the crowd. O'Brien has become a phenom, finishing seventh in the 2021 games at 17 and winning this year's open competition.

"I love watching the teen competitors move up through the event," Davis said.

While athletes high-fived crowd members between events, other CrossFit figures also drew a crowd. As one event concluded, the Leighs sprinted toward a group of men they recognized as CrossFit influencers: "The Buttery Bros," who boast over 230,000 followers on Instagram.

The CrossFit brand is not just a workout style, but a business, most recently valued at $4 billion. It also has encountered controversy, when its former CEO was accused of rampant sexual harassment and charges of racism that led him to leave the company.

At the games, dozens of tents and vendors offered free samples of fitness products, health food and workout programs.

"I'm poor now," Newcomer said with a laugh, noting she had bought too much clothing already on the second day. "It's bankruptcy."

CrossFit's branding leans into superlatives and declarations: An archway above the entrance to the games reads "FITTEST ON EARTH." At one of the many merch stands, a vendor advertises the "World's Toughest Gear." In the crowd of athleticwear and trainers, T-shirts demand that their wearers "Embrace the suck" — and inform them that "puking is acceptable, quitting is not."

But the games' ethos is also one of inclusivity: Everyone should try CrossFit. Spectators are encouraged to work out themselves. While athletes ran laps and lifted barbells on the field, visitors could watch them on a videoboard while heaving barbells over their heads.

Community, more than anything, draws people to CrossFit and keeps them coming, said Ethan Snyder, one of hundreds who made the drive to Madison to camp out outside the Alliant grounds.

"Once you get involved at the gym, and become a family with all the people you didn't know, it's unlimited possibilities," Snyder said. At his gym, near Fort Knox in Tennessee, Snyder became gym buddies with a high-ranking garrison commander.

Devi Calvo, of Austin, Texas, camped out with her boyfriend.

"It's like music," Calvo said. "It brings everybody together. Everyone's so kind-hearted, and such genuine people."

That togetherness extends across athletes from different states and countries, and across languages, Alexander said.

"I don't think worldwide is any different than our community in Danville," Alexander said. "They don't speak English, but we share that common goal."

One of Friday's events concluded at the steps of the Capitol: After running from the arena to Capitol Square, athletes had to carry a 150-pound sandbag up State Street and up the steps.

As Rebecca Fuselier brought up the tail end of the competition, lugging the bag and dropping it every 10 yards, spectators lined State Street and the steps, shouting encouragement. At the end, as she conquered each new portion of the street, the crowd filed in behind her, a mass of people cheering her on up the steps and across the finish line.

To see the current leaderboard for the CrossFit Games, go to: go.madison.com/crossfitleaders.

Peak of the Perseids contested by the moon on Aug. 11-12

Peak of the Perseids contested by the moon on Aug. 11-12 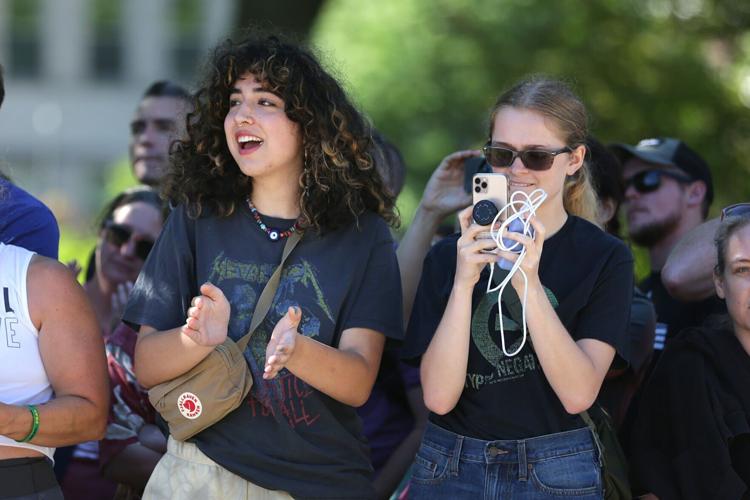 One event on Friday required athletes to run from Alliant Energy Center to the Capitol steps, where they were greeted by hundreds of cheering fans. 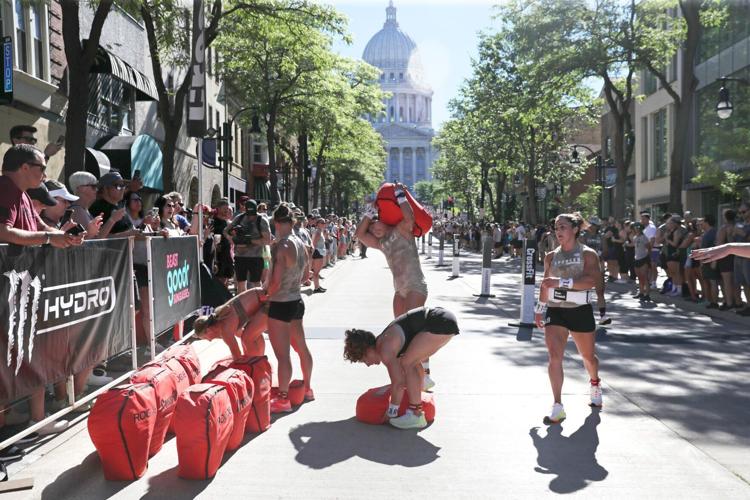 CrossFit athletes in the individual men's and women's competitions finished off an event Friday by carrying 150-pound sandbags up the steps of the Capitol.

Spectators at the CrossFit games can complete their own workouts, all while top athletes compete at the Alliant Energy Center and an adjacent field.

Dozens of athleticwear and nutrition-focused vendors were on scene at the CrossFit Games, where spectators shopped between events. 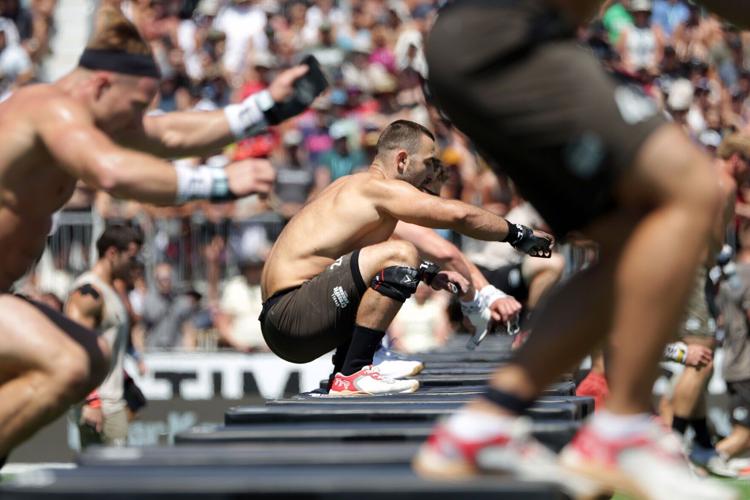 Lazar Đukić, of Serbia, center, completes a series of box jumps during the sixth workout of the CrossFit Games. In many events, athletes do not know what activities they will be competing in until the day of the competition. 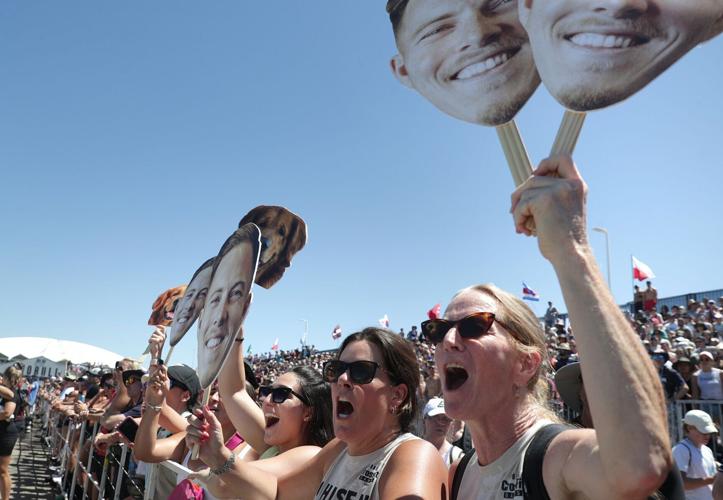 Wendy Ohlsen, right, mom to competitor Noah Ohlsen, and Sara Maciver cheer him on during the sixth workout of the CrossFit Games. Only 40 men and 40 women, along with a number of teams, teens and older athletes, qualify for the games.