Subscribe
Read Today's E-Edition
Share This
Custodian becomes a citizen: Racine school janitor has lived in U.S. since 1990, and now has achieved his goal
0 Comments
Share this
RYAN PATTERSON

RACINE — Rogelio Moreno had a phrase he told himself while studying: I got it.

After 20 months of learning about the U.S. Constitution, Declaration of Independence and many aspects of American history, that belief paid off. On May 2, Moreno passed the United States citizenship test.

After finding out he passed, he was filled with joy. “I jumped in my seat and said, ‘Yeah!’” Moreno said.

Moreno has lived in Racine for almost 20 years and said becoming a citizen has long been a priority.

The road to citizenship started about five years ago.

“It’s a long process,” Rogelio said. “(I was) nervous every day, nervous, nervous.”

Moreno said he hopes to “be an example for all who would like to go forward and become a citizen … You can reach any dream or goal that you have in your life if you just apply yourself.”

In addition to daily studying on his own, Moreno received help from colleagues at St. Catherine’s High School, 1200 Park Ave., where he has worked as a custodian for a year.

Custodian Gerald Olley often quizzed Moreno for 15-20 minutes during breaks and occasionally offered tips. For example, one question was who the U.S. president was during World War I. It was Woodrow Wilson, and Olley suggested Moreno remember that there were two Ws in the question and answer.

Olley said he “was happy to” help Moreno study, and he believed his coworker would pass the test.

Sandy Moreno, who married Rogelio in 2012, also felt confident her husband would succeed.

“I knew he was going to pass,” Sandy said. “He was very dedicated.”

Using audio recordings and flashcards, Moreno went over potential test questions every day. He listened to questions in his headphones while making meals at home and while working at the high school.

Once while at work, the question “What is the Constitution?” was asked in his headphones. Forgetting himself for a moment, Moreno said aloud, “The supreme law of the land.”

A nearby teacher heard him talking and said, “What?”

The day he passed the test, Rogelio and Sandy had a nice dinner to celebrate, and the high school had a small party in May.

Rogelio said the school has embraced him, and it feels like a family atmosphere. Olley called Rogelio an excellent, hard-working colleague.

“We’re glad to have him,” Olley said.

Sandy is glad to have him as well. She grew up in Racine and works as a lunch lady at St. Catherine’s. She and Rogelio met when he had a job remodeling her home. Sandy is fluent in Spanish and occasionally translated for Rogelio during an interview.

Rogelio lived in California and Texas before moving to Racine in 2004. He said it was a big adjustment moving to the Midwest from much warmer climates.

Sandy helped show him winter activities like sledding and building a snowman.

In mid-May, Rogelio received the official citizenship paperwork. His passport arrived last week. Receiving both of those were massive reliefs.

Leading up to the test, there was nervous anticipation, but Rogelio felt prepared because of all his studying. After passing the test, his motto came true: I got it. 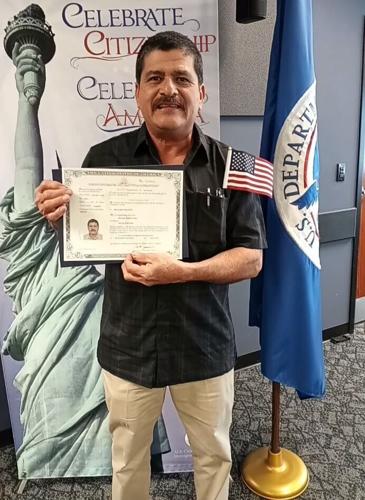 Rogelio Moreno became a U.S. citizen in May after passing the citizenship test. 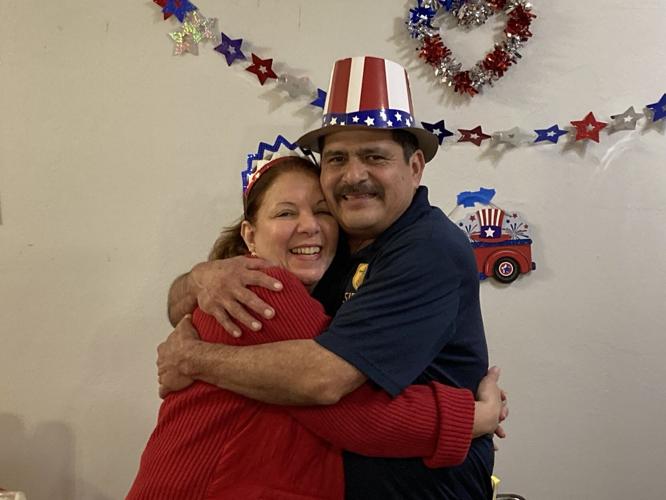 Sandy Moreno hugs her husband, Rogelio, as they celebrate his becoming a U.S. citizen. 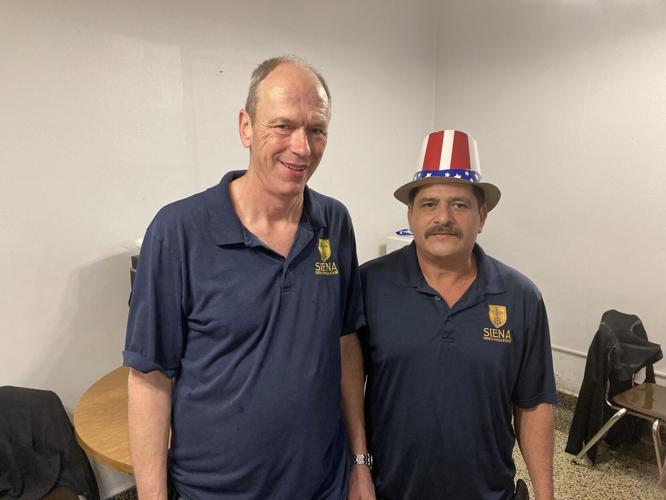 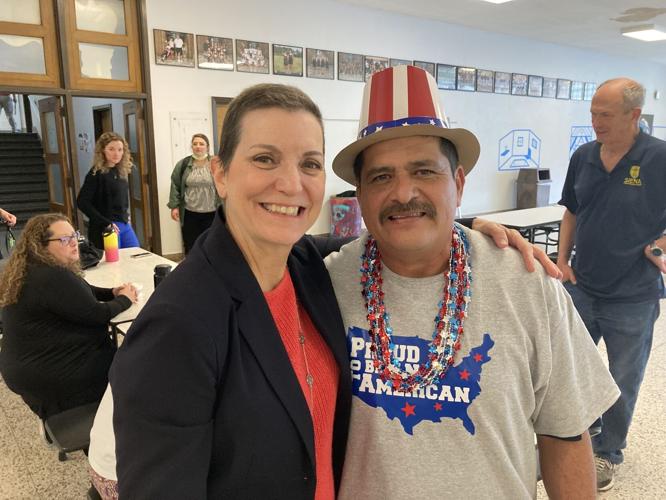