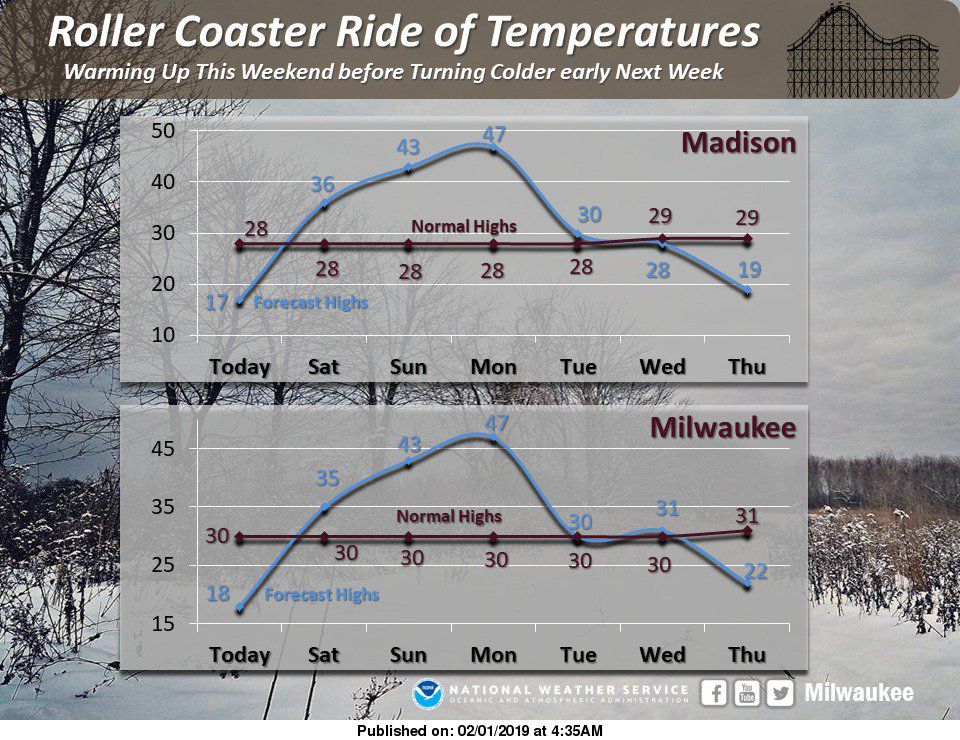 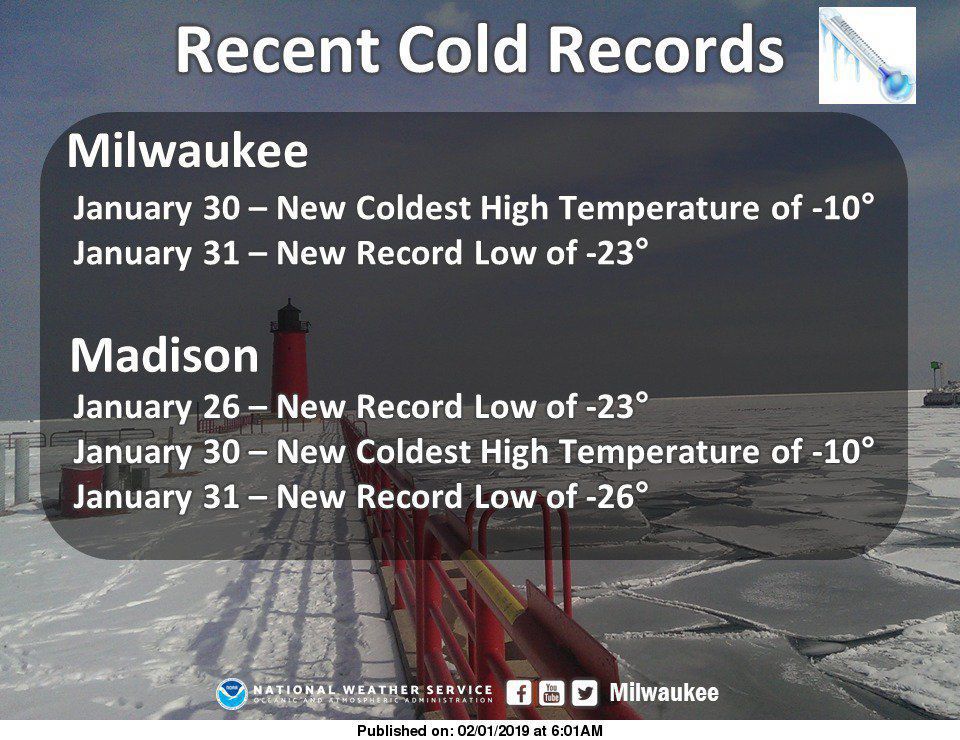 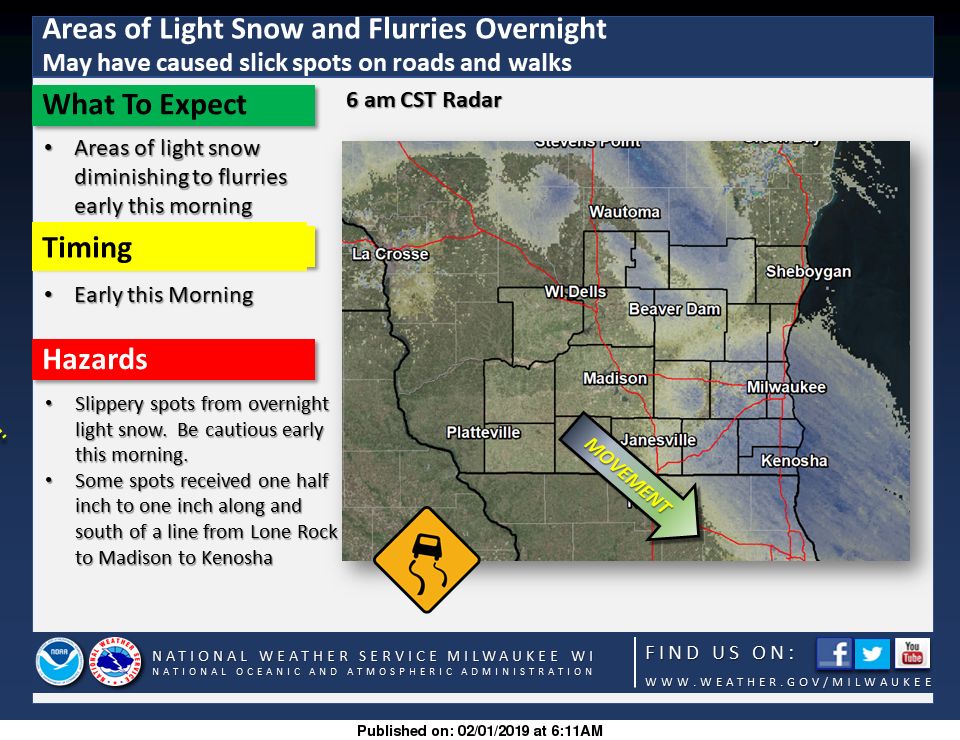 One of the coldest stretches of weather ever to hit Madison is just about over.

The high temperature on Friday is expected to reach 18, with the temperature finally getting above zero in the morning, ending a three-day stretch of below-zero temperatures.

The Weather Service said the low on Thursday dropped to a record 26 below zero, beating the old record of 22 below for Jan. 31, set in 1985.

The high only reached 5 below on Thursday, just 1 degree off the record maximum high of 6 below in 1918.

With the arctic cold moving back north, milder air moves in, with highs possibly reaching the mid- to upper 40s Sunday and Monday.

The 80-degree shift in temperatures in the Midwest could cause major problems, such as burst water pipes, flooded rivers and crumbling roads.

"I don't think there's ever been a case where we've seen such a big shift in temperatures," said Jeff Masters, meteorology director at Weather Underground, in an interview with the Associated Press.

Before the big swing comes, people in southern Wisconsin still have to deal with very cold weather on Friday.

Nelson's Bus Service uses buses that run on diesel fuel, and most of the fleet is stored outside, so the extreme cold caused the diesel fuel to gel, not allowing the buses to operate properly.

The wind chill won't be as much of a problem Friday as it had been the past few days, but we could still see readings in the 10 below to 20 below range in the morning.

The Weather Service said temperatures could keep rising Friday night thanks to a south wind, so we could see a temperature of 26 by 5 a.m. Saturday.

There's a slight chance of drizzle or freezing drizzle Saturday afternoon with the high reaching 36, but there's a better chance of mixed precipitation Saturday night, with temperatures staying steady early on, then rising to about 43 in the overnight hours.

27 Storm Track meteorologist Guy Brown said we could see drizzle or a little light rain on Sunday with the high reaching 45.

Rain is likely Sunday night, mainly after 1 a.m., with temperatures only dropping to 39. Less than a tenth of an inch of rain is expected.

Monday could be the warmest day we've seen in Madison in about a month.

The Weather Service is forecasting a high of 48, with gusty winds and rain totaling up to a quarter-inch.

Rain is possible Monday night, but colder air moving in could change the rain to snow by Tuesday morning.

Snow is possible Tuesday through Thursday, with highs topping out around 30 each day.

Two-hundredths of an inch of precipitation fell at the airport on Thursday, putting the January and 2019 total at 2.56 inches, 1.33 inches above normal.

For the meteorological winter of December through February, Madison has received 4.66 inches of precipitation, 1.69 inches above normal.

The precipitation on Thursday came down as 0.6 inches of snow, bringing the January total up to 19.8 inches, 6.9 inches above normal.

More in Deep freeze: Read our coverage of the early 2019 polar vortex in southern Wisconsin (2 of 47)

Dangerous cold nearly over, so — of course — snow returns to forecast in advance of big weekend warm-up

Drinking one beer, walking into a liquor store, forgetting a court date — actions that aren't themselves crimes can yield felony charges if they're conditions of bail and you violate them.

In response to Democratic Gov. Tony Evers' package of farm assistance bills unveiled last month, Republicans say they plan to roll out their own collection of bills — that would come with a much bigger price tag — aimed at assisting Wisconsin's ailing agriculture industry.

Monday snowstorm to deliver heaviest blow in counties north of Madison area. See how much will fall and where

Several inches will fall in the line of counties north of Dane County, with winter weather advisories in effect, while less will fall to the south, according to forecasters.