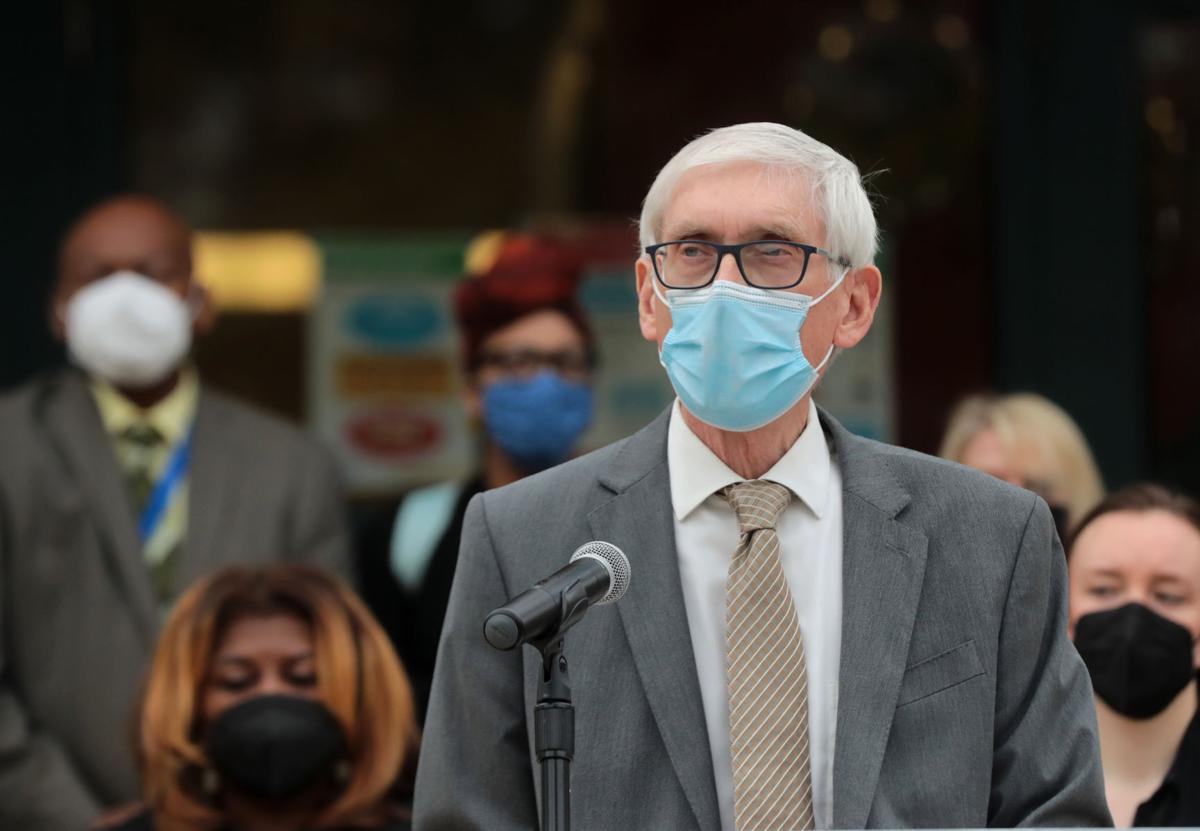 Speaking outside Henderson Elementary School in Madison on Thursday, Gov. Tony Evers said he is listening to what people want in the next state budget. 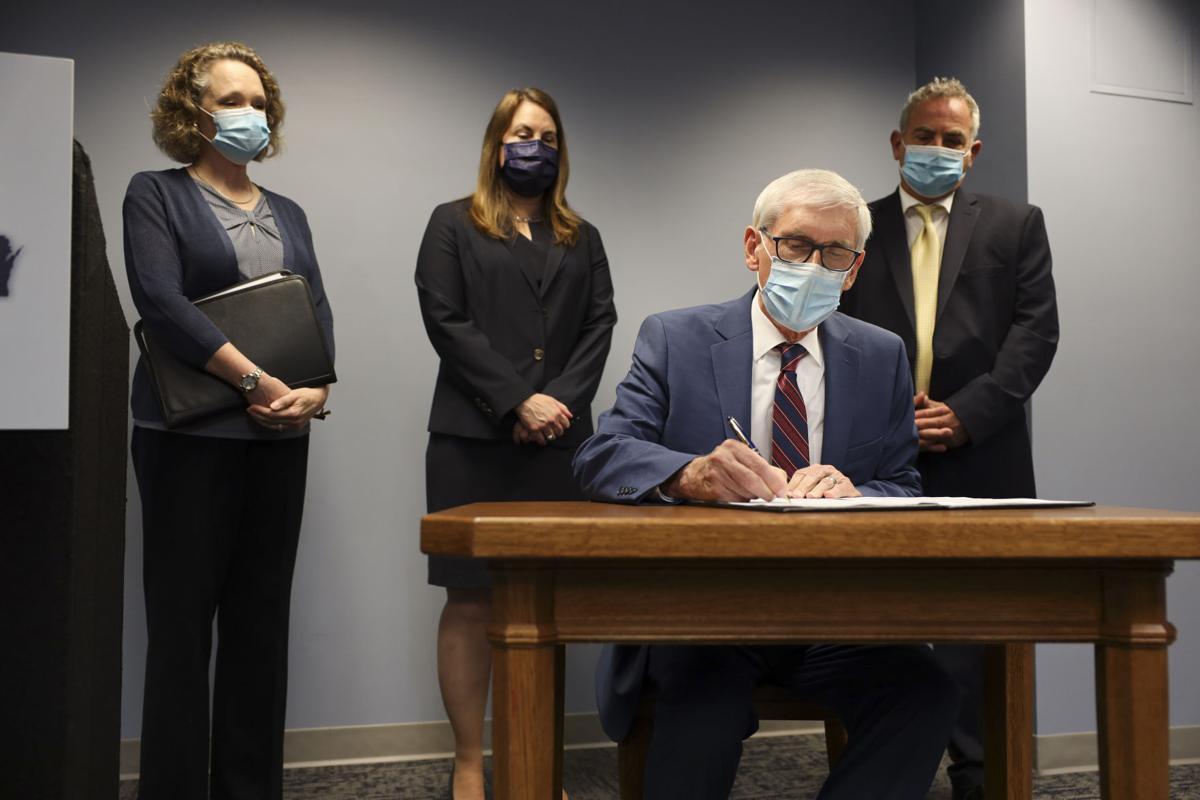 Gov. Tony Evers calls on the Wisconsin Legislature to meet in special session to expand BadgerCare during a press conference at the Benevolent Specialist Project Free Clinic on May 19, 2021, in Middleton.

State Republican leaders have rejected Gov. Tony Evers’ proposal to expand Medicaid access in the state and use a large chunk of the $1 billion in one-time federal funds that would come with expansion toward economic development projects across Wisconsin.

Evers on Wednesday called the Legislature into session to expand BadgerCare to reach an estimated 91,000 new residents. Hours after the Democratic governor’s proposal, Republicans signaled they remain opposed to expanding Wisconsin’s federally funded health care program for low-income individuals, which has been one of Evers’ signature policy priorities.

During a news conference at Middleton’s Benevolent Specialist Project Free Clinic, the Democratic governor put what he called “a billion-dollar signature” on his executive order calling on the GOP-led Legislature to hold a special session next Tuesday on BadgerCare expansion, which Republicans in the state budget committee stripped from Evers’ proposed 2021-23 biennial budget earlier this month.

“It’s time for Republican leadership to put politics aside and recognize this is a great deal for all of us,” Evers said. “Enough politics. Let’s get to work.”

“If the Governor were serious about the proposals he packed into this bill, he could fund each one of them today with the mountain of federal funds at his direct disposal,” they said. “This is a thinly veiled political maneuver by the Governor. We intend to gavel out this unserious stunt.”

In ongoing state budget deliberations, Republicans have remained steadfast in their opposition despite additional federal incentives for expansion provided in the latest federal stimulus program that would amount to $1.6 billion in savings for the state over the next two-year budget, including $1 billion in one-time funds through the federal stimulus.

“From one end of the state to the other, everybody is going to benefit by taking that $1 billion,” Sen. Jon Erpenbach, D-West Point, said. “I can’t stress this enough, I don’t think this opportunity will ever come again.”

Evers’ special session request attempted to make an overture to Republicans by directing the savings from Medicaid expansion into Wisconsin’s economic recovery and more than 50 projects and economic development initiatives across the state. It would also add $151 million to the state’s rainy day fund.

All told, Evers proposed putting an estimated $850 million in Medicaid expansion dollars to a list of projects, including $200 million in funding for broadband expansion, $100 million to help replace lead service lines for private users of public water systems and $100 million to local governments for road and other infrastructure improvement.

Other items in the legislation include: $50 million in veteran housing grants; $10 million to provide assistance to communities affected by PFAS; $2.7 million to establish and maintain an opioid and meth data system; and $11 million to support rural Emergency Medical Services.

“In Wisconsin, there is no coverage gap between BadgerCare and the heavily subsidized federal exchanges. Everyone who wants insurance in our state has access and options,” the Republican leaders said. “Our unique-to-Wisconsin solution is working, and we will not shift tens of thousands of people off their private insurance to a government-run system.”

Accepting federal money available through the Affordable Care Act would increase the minimum income threshold to qualify from 100% of the federal poverty rate to 138%, which would increase the income eligibility for a single person from $12,880 a year to $17,774.

Evers has said expanding Medicaid eligibility would save the state by tapping additional federal funds and cover an estimated 90,000 additional people while expanding benefits such as addiction treatment and enabling more payments to providers such as hospitals and nursing homes.

Evers has called the Legislature into several special sessions since taking office more than two years ago, but Republicans, who control the state Senate and Assembly, have largely punted on those requests, which have ranged from gun control to updating the state’s aging unemployment system.

While special sessions offer the governor an avenue to seek legislative action on specific policy goals and lawmakers have to gavel in when such a session is called, the Legislature is not required to discuss or vote on any issue. Lawmakers also have the ability to make amendments to legislation proposed by the governor.

For years, police have warned residents to lock their vehicles and homes to discourage opportunistic young thieves. At times, that advice appears to be falling on deaf ears.

Unlocked doors led to a stolen vehicle and a stolen handgun overnight Thursday into Friday on the Near West Side, Madison police reported.

A 15-year-old boy was arrested Thursday, two days after fleeing the scene of a Far West Side burglary with others in a stolen vehicle, Madison police reported.

An unlocked SUV with a garage door opener inside of it was stolen from a Southwest Side home, along with several wallets, Madison police reported.

Town of Madison police officers found the stolen vehicle at a 7-Eleven on Park Street and arrested an 18-year-old male occupant, while a male juvenile ran from the vehicle and was not apprehended, police said.

No injuries were reported in the crashes police responded to on Sunday.

One of the trio, a 15-year-old from Madison is wanted by several jurisdictions, with Madison police having probable cause to arrest him for burglary while armed and for dropping a handgun outside of Leopold Elementary School on Oct. 22.

The case shows that recent arrests in Dane County and in Sauk County haven’t ended such crimes, as police had warned

Keys left in Madison cars make job easier for thieves, many of whom are teens

"Stolen cars -- when recovered -- often have been damaged and many smell of pot, so on several levels people have been victimized."

Janesville police said they have seen a recent spree of thefts of vehicles left unlocked with keys inside.

"It’s time for Republican leadership to put politics aside and recognize this is a great deal for all of us."

Watch Now: America is running out of lifeguards

Watch Now: America is running out of lifeguards

Children and delta: What parents need to know

Children and delta: What parents need to know

Follow along as Phil Hands shows you how he draws his most recent cartoon with some new techniques.

Wisconsin's unemployment rate stood at 3.9% in April, a stark contrast to one year earlier when the coronavirus pandemic gripped the state and…

Speaking outside Henderson Elementary School in Madison on Thursday, Gov. Tony Evers said he is listening to what people want in the next state budget.

Gov. Tony Evers calls on the Wisconsin Legislature to meet in special session to expand BadgerCare during a press conference at the Benevolent Specialist Project Free Clinic on May 19, 2021, in Middleton.