In the case of the Lakeland Times versus former Democratic Assembly candidate Kirk Bangstad and his brewery, it’s the other way around. And there’s little sign the two sides will settle their differences over a beer any time soon.

The parent company of the Lakeland Times, a weekly newspaper with a conservative editorial position, and its owner Gregg Walker sued Bangstad for libel last month in Oneida County Circuit Court after Bangstad refused to take down Facebook posts last year in which he called Walker a “crook” and a “misogynist” and alleged the newspaper had called a local business official a derogatory name for a person with cognitive delays.

Aside from his failed bid in November to unseat incumbent Rep. Rob Swearingen, R-Rhinelander, Bangstad might be best known as the owner of Minocqua Brewing Co., which touts itself as the maker of “progressive beer” and has come up with beers saluting Democratic President Joe Biden and U.S. Sen. Bernie Sanders, D-Vt., and has a political action committee that has paid for billboards criticizing U.S. Rep. Tom Tiffany, R-Minocqua, and U.S. Sen. Ron Johnson, R-Oshkosh. 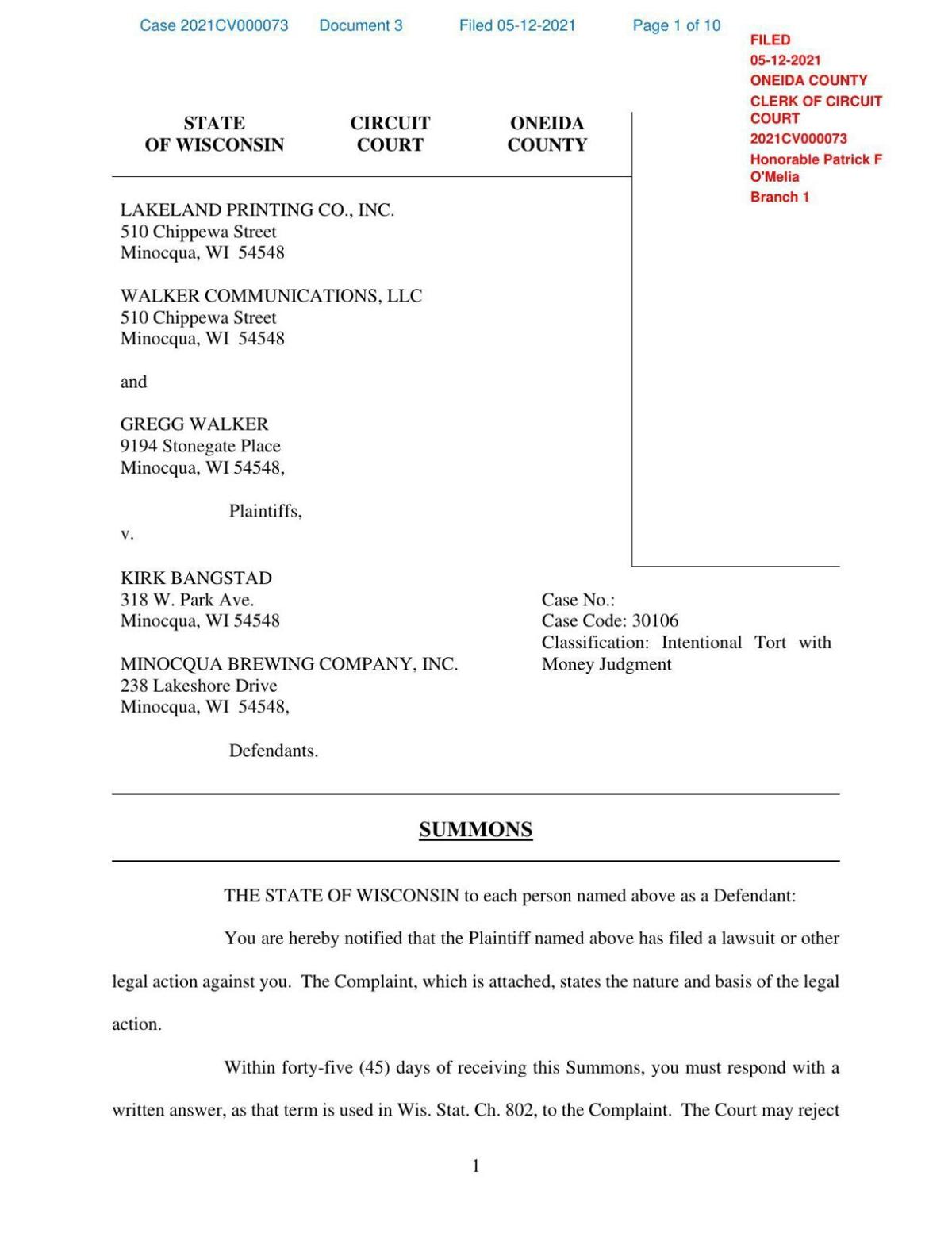 Minocqua Brewing gives 5% of profits to its MBC Super PAC, which “aims to remove Republican federal and state elected officials who perpetuated the election lies that caused the Insurrection of January 6, 2021, and whose downplaying of the seriousness of COVID-19 caused so many unnecessary deaths in our country,” according to the brewery’s website.

Walker declined to go into detail about the suit, but said “everything that Kirk Bangstad has said about me and my newspapers we could never publish in our products legally.”

Bangstad said the suit is an attempt by a newspaper he considers unreliable and slanted toward the political right to silence an outspoken progressive, as well as siphon money away from liberal political advocacy in an area that’s long been a Republican stronghold. He said it’s ridiculous to compare what’s in a newspaper with what’s posted to social media.

“Newspapers exist solely because of the First Amendment. They are public figures. Gregg Walker is a public figure,” he said. “I give it back way more intelligently and with way more facts and truth than his reporters do.”

It’s not clear, though, that a court would see things the same way.

With 2020 in sight, dark-money sites look to distribute their versions of the news

The concept of libel doesn’t change based on whether an allegedly libelous statement is made on social media or in a more traditional form of media such as a newspaper, according to UW Law School professor Anuj Desai.

A “key question” a judge will need to address, he said, is whether Bangstad’s statements are to be considered fact or opinion, as “only false statements of fact constitute libel.”

While people say false and insulting things about other people and groups on Facebook all the time, attorney James Friedman, who sent cease-and-desist letters to Bangstad on Walker’s behalf, said “the fact that social media is ubiquitous doesn’t mean that people should go around libeling people.” He believes Walker has a strong case.

Bangstad’s statements could also be seen as so much bluster, Desai said, and their presence on social media might boost that view.

Get ready for a new show of force in Midwestern journalism

“Some statements might be viewed as factual in a newspaper but just hot air on” Facebook, he said.

When Bangstad called Walker a “crook,” “the question is, whether, in context, that reference would be understood by readers to be a factual claim that Walker actually committed a criminal offense,” he said. “As for ‘misogynist,’ my first instinct is that that would not be viewed as literally a factual claim and so would be treated as an ‘opinion.’ Terms of that sort are generally not treated as literal facts about someone.”

“I think he bullies women,” Bangstad said of Walker. “Do I really need to say he’s an alleged misogynist?”

Desai said Walker’s strongest claim might be that Bangstad falsely stated the newspaper used a derogatory term for the local business official in print several years ago. Walker denies that it did, and Bangstad told the Wisconsin State Journal he remembers the paper using the word but his memory could be mistaken.

The May 12 suit includes the 10-page summons and complaint and 42 pages of exhibits made up of a June 5, 2020, Lakeland Times “news analysis” critical of an Oneida County Health Department COVID-19 policy, a March 26 Lakeland Times story critical of Bangstad’s campaign finance reporting, Bangstad’s Facebook posts and two cease-and-desist letters from Friedman telling Bangstad to delete his posts.

Walker’s current attorney, Matthew Fernholz, did not respond to a request for comment. Bangstad’s attorney, Frederick Melms, who has not yet filed a response to the complaint, declined to comment.

The Wisconsin State Journal collected 10 first-place awards in an annual contest put on by the Wisconsin Newspaper Association, including recognitions for general excellence, all-around photography and the opinion pages.

Owner vows to rebuild, but a popular northern Wisconsin destination in Boulder Junction won't be the same

A fire last month destroyed Gooch's A-One Bar & Grill and its massive collection of wildlife mounts in Boulder Junction. But the owner is vowing to rebuild the business that is popular with visiting anglers, snowmobilers and locals.

'A church that stands for something that is vitally needed': Black and white churches form alliance

The two churches — one predominantly black, the other mostly white — will have services under the same roof on the East Side starting Sunday.

Iraq War veteran to receive pardon from Tony Evers: 'That felony is not who I am'

It’s been 40 years since the last zinc mine closed and nearly two centuries since Southwest Wisconsin was the nation’s primary source of lead. The last vestiges of the industry have all but disappeared, but the toxic legacy remains.

'Toxic' lab lasted for years. UW-Madison had little idea until a student died by suicide

John Brady faced a stressful work environment under an engineering professor before taking his own life.

The change will ensure reports of hostile and intimidating behavior "do not simply remain hidden inside a department or unit," Chancellor Rebecca Blank said.

Wisconsin's connection to Alexander Hamilton is that of his pioneering son, William

William Hamilton came to Lafayette County in 1828 to mine lead and founded what is now Wiota.

UW-Madison professor at center of 'toxic' lab wasn't fired. Is tenure to blame?

Firing of faculty members is rare. The UW Board of Regents dismissed six professors in the past decade.

Taryn Seymour, an interior designer with two young children who lives near Spring Green, donated a kidney to a stranger this year. “I think the spirit of giving is contagious,” she said.

UW-Platteville Richland had nearly 250 students in 1980 when the campus was considered for closure. Today, it has 155.

The most recent investigation of tenured professor Akbar Sayeed is "currently underway regarding additional information that surfaced in fall 2019."

Mass cancellations, restrictions for COVID-19 pandemic unprecedented for most Americans

Sonny Tiedemann's car is now part of the collection of the Grant County Historical Society Museum in Lancaster.

In a mobilization reminiscent of World War II, when factories worked around the clock to address military needs, Wisconsin businesses are responding to the COVID-19 pandemic.

For workers on the front lines of the COVID-19 pandemic, the risk isn’t theoretical. Despite wearing protective gear, and taking other precautions, they’re inches away from patients emitting a new virus that has killed more than 55,000 people.

Middleton girls coach Jeff Kind now says he has reconsidered retiring from coaching and hopes to return next season after the Cardinals didn't get to play at the state tournament. The WIAA canceled the winter sports season due to the COVID-19 coronavirus situation.

Even if rules are tightened once the outbreak dies down, some expansion of telehealth appears here to stay, medical experts say.

The director of the Madison Museum of Contemporary Art has been a part of the museum's evolution, helped guide it out of financial distress in the early 1990s and readied it for its move to a new space at Overture Center.

FluGen's coronavirus immunization candidate, CoroFlu, is one of roughly 100 or more competitors in a global race to produce a safe and effective vaccine against COVID-19.

With Wisconsin's COVID-19 rules relaxing, what activities are safe? Here's a FAQ

With Wisconsin's "Safer at Home" order struck down and Dane County's COVID-19 restrictions set to expire May 26, people will be able to resume more normal activities. But are they safe? Here are doctors' answers to frequently asked questions.

Thousands of UW-Madison students move in and out of apartments and houses this weekend. Will they follow the rules off campus?

"The video that came out of Kenosha is absolutely horrific. I don’t understand how people can watch it and not be here," one Madison protester said.

Law school to remove John Marshall's name over racist past

Trustees voted to remove the name of the longest-serving U.S. Supreme Court chief justice from the University of Illinois-Chicago law school because of his history as a slave owner and trader.