Become a Member
Read Today's E-edition
Share This
Know Your Madisonian: Former Dane County Parks director encourages all to get outdoors
0 Comments
Share this
1 of 2 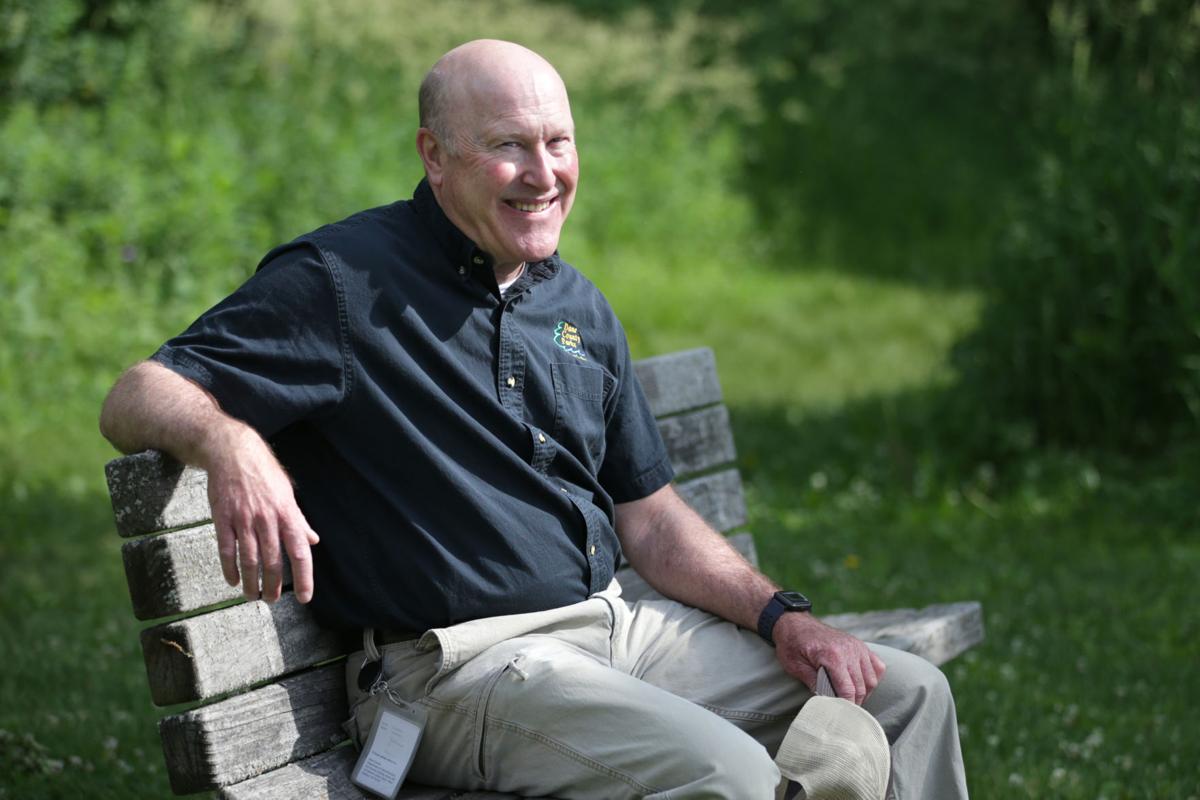 Darren Marsh, at Lake Farm Park, retired this week as as Dane County Parks director after nearly three decades during which the county's parks, wildlife areas and trails grew from roughly 4,200 acres to 14,600 acres. 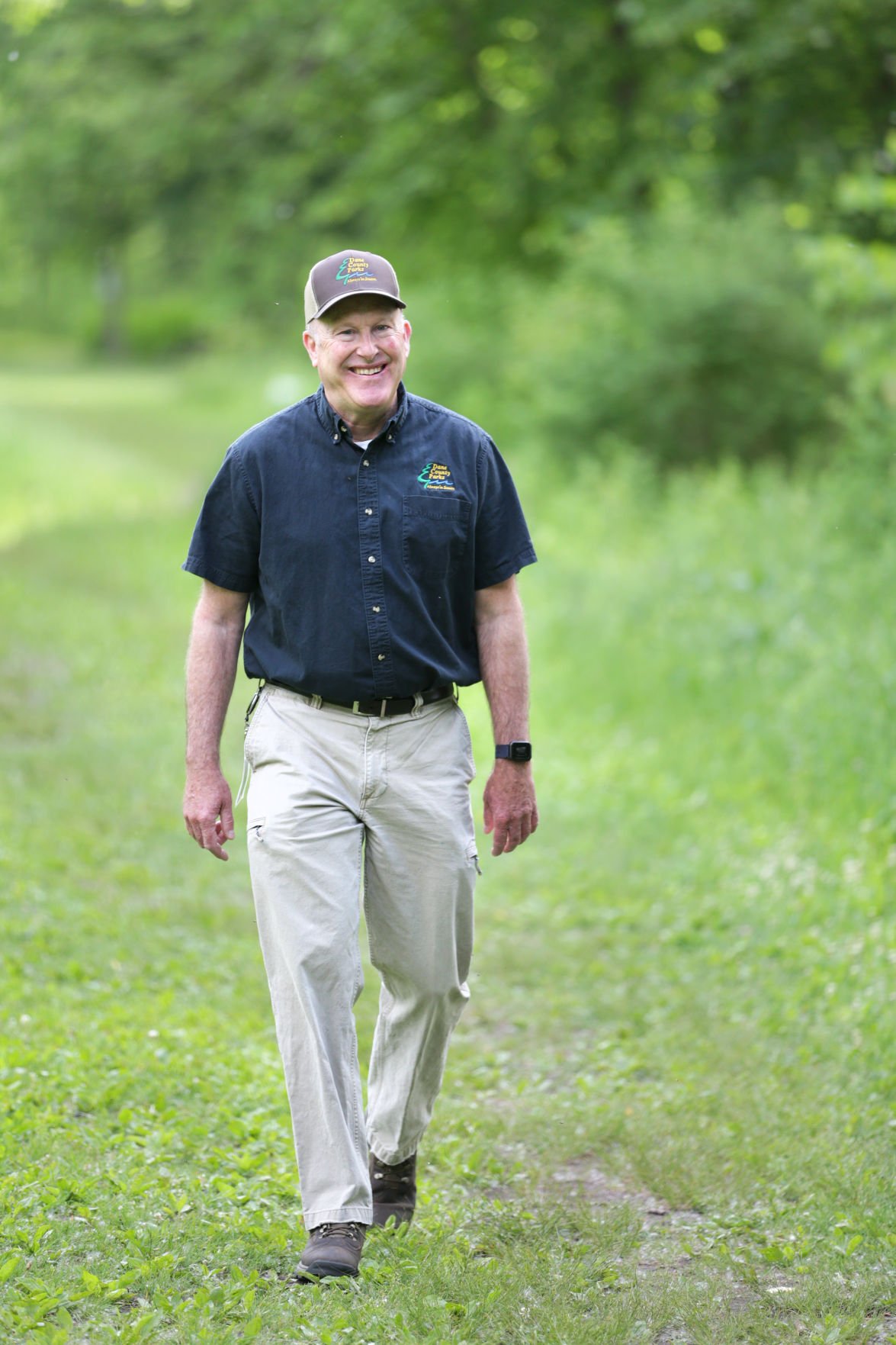 "We have so many great places to go to in Dane County," Darren Marsh says. "I just want to make sure that people understand that they have them out there and get people out there."

As of Marsh’s retirement on Thursday, the county’s overall land management system had grown to 14,600 acres — almost 18,000 if you add in easements for accessibility to trails or trout streams, for example — through donations and other protected land acquisitions.

Marsh, who had served as the county parks department’s director since 2003, may very well have a story for every single acre, which is probably why it’s difficult for him to pick a favorite park, stream or trail.

“We have so many great places to go to in Dane County. I just want to make sure that people understand that they have them out there and get people out there. Go out and see these parks — go out there and paddle our waters, go out and fish a trout stream, go out there and take a picnic in a park — and choose a different park each time you go out.”

In late June, the Dane County Board unanimously passed a resolution to rename a county-owned facility on Robertson Road the Darren Marsh Parks & Lake Management Facility.

The Foundation for Dane County Parks will hold a public event to celebrate Marsh from 4 to 7 p.m. Sept. 9 at Lake Farm Park’s Shelter 2.

How did you end up with the Dane County Parks Department?

Born in Sturgeon Bay, Marsh grew up in Madison after his father, who was a Wisconsin Department of Natural Resources forester, relocated here. In between classes at Memorial High School and later UW-Madison, where he earned a degree in forestry and park recreation, Marsh could be found doing the things he still loves today, including camping, fishing, hiking or simply spending time outside.

“I got a lot of my inspiration from him,” Marsh said of his dad. “From that point on I was working in natural resources my whole life. Anything I was doing was outdoors, whether working landscaping, helping manage our family property or working in parks and things like that.”

Before joining the Dane County Parks Department in 1993, Marsh spent time as a park ranger at Door County’s Whitefish Dunes State Park, with the U.S. Fish & Wildlife Service in New Mexico and as an assistant administrator with the Jackson County Forestry and Parks Department.

The COVID-19 pandemic upended nearly every aspect of most people’s lives, but one area that has thrived has been outdoor recreation. How did the coronavirus impact Dane County’s parks?

“The outdoors provided that safety cushion. The outdoors has always been there for that and there’s so many known health benefits for being outside that it became the destination where people would go. People found out about all of these places. There isn’t a place in Dane County now that you can go to that people probably do not know about. It’s been just truly amazing. We estimated that our visitation went up another million during the pandemic, from 3 million to 4 million.”

Any plans after retirement?

Marsh said he plans to eventually move back to the family farm in Door County, but that may not be for another year or so. Until then, Marsh plans on spending time with his wife, Dawn, children Bryce and Casey, and their dog, Nikki.

“We’re going to get outdoors, we’re going to bike and hike, we’re going to fish, all the things we love to do. But with my work schedule, it’s been a little tough to fit in. After I have that break for a little bit I’m going to try to get back involved to support what I have a passion for — our public spaces.”

“The one thing I want to really get across is the work of our amazing staff and our volunteers. Park staff and our passionate volunteers work so hard to provide great parks and top-notch services. They do the most important work. Support from community leaders has been unwavering and I’m very thankful for the opportunities that I was given to carry out their initiatives. It’s been truly unbelievable experience.

“I can guarantee you can’t find another community in the United States that has the initiatives that we have here in Dane County, protecting our natural resources and looking toward the future. Being part of that, working with a tremendous team, has been very inspirational and it’s just been an amazing career.”

They're your neighbors, co-workers or friends you may not have met yet. And they all have a story to tell.

Lessner started out in the laundromat business when he was about 10 years old helping his dad.

The Madison Police Department's new public information officer Tyler Grigg wants to be timely, open and maybe even a little creative in his new position.

Know Your Madisonian: Reading Project founder wants to give magic of books to all youngsters

Rowan Childs, 44, wanted to fill her home with books for her own children to enjoy but knew not all children are able to have the same experience.

“I did find my passion," says Sally Zirbel-Donisch, "... it was working with not only students and families but staff and partners in the community."

In 1992, Kathy Kuntz enrolled in UW-Madison, expecting to earn a PhD in history, but it was a temp job as a receptionist at a nonprofit that led her into what would become a career in energy.

Know Your Madisonian: Local screenwriter named one of world's best

Know Your Madisonian: Service to the democracy, the community and her dogs

A poll worker and volunteer interviewer for the Fire Department, Pranee Sheskey says she enjoys being part of making democracy work.

John Adams and Michael Moody founded the nonprofit Catalyst for Change in January 2020 to eliminate human suffering one life at a time by placing human dignity and development at the forefront of poverty, addiction and homelessness.

For more than two decades, the Droids Attack front man has refurbished games at his business Aftershock Retrogames. Now, he's looking to open an arcade bar.

Know Your Madisonian: Madison Audubon director is in the serious 'joy business' of connecting birds and people

Watch now: Know Your Madisonian: An era ends at Hilldale ... and begins along the Mississippi

Since 1962, the McCann family name led efforts to make sure Hilldale shopping center is clean and safe. Now Tom McCann has retired to fish, hunt turkeys and catch Dungeness crabs.

Tony Gomez-Phillips' prairie-inspired planting connects Frank Lloyd Wright's architecture with a garden style that embodies his views of nature and how it interacts with humans.

Out Health, run by Dr. Kathy Oriel, is in a former dentist's office on University Avenue.

Know Your Madisonian: Artist brings 'magic to the everyday mundane' with replica Capitols

Reid Magney reflects on 12 years with the Wisconsin Elections Commission

This month, Magney announced he will be departing from the WEC to join VoteRiders, a nonpartisan nonprofit organization with the goal of ensuring that voter ID laws don't prevent qualified citizens from voting.

Omar Anguiano, founder of La Barra 608, cheers on his team and his group's community service mission.

Authorities are searching for a snowmobile driver who veered into a highly touted sled dog team in northern Wisconsin and injured two of the dogs, including one that ran the Iditarod last year.

Settlement reached with couple on property near Foxconn site

Mount Pleasant is paying nearly quadruple the most recent assessed fair market price for the property of one of the last Foxconn holdouts.

One search, two boys found: The Missouri Miracle 15 years ago

The trail of a child kidnapping in 2007 led to an apartment in Kirkwood where Shawn Hornbeck, missing for more than four years, was found too.

The UW Board of Regents will choose between a Milwaukee law firm CEO and one of its own chancellors to be the next president of the UW System.

Democratic Gov. Tony Evers announced Thursday he had pardoned 54 more people, bringing his total to nearly 400, the most of any Wisconsin governor.

Many municipalities, including Madison, used ballot drop boxes in 2020 to mitigate the spread of COVID-19. Thursday's ruling means such boxes will not be allowed in the the February 15 spring primary.

Milwaukee police are investigating after a body was found in a burned vehicle that had been towed to an impound lot.

The assistance comes as Wisconsin reported a record 13,004 new COVID-19 cases Thursday, bringing the daily average to a pandemic high of 9,915.

Fake COVID-19 Testing Sites Are Popping Up Amid Omicron Surge

Darren Marsh, at Lake Farm Park, retired this week as as Dane County Parks director after nearly three decades during which the county's parks, wildlife areas and trails grew from roughly 4,200 acres to 14,600 acres.

"We have so many great places to go to in Dane County," Darren Marsh says. "I just want to make sure that people understand that they have them out there and get people out there."