With his sentencing approaching on Friday, a former East High School business teacher convicted of attempting to create child pornography using hidden cameras in students’ hotel rooms wrote in a letter to a judge that his obsession with spying on people didn’t begin with his students, but it ended there after starting with family and friends, including his wife, parents and grandparents.

In the eight-page handwritten letter, filed Tuesday in U.S. District Court with his attorney’s sentencing memorandum, David Kruchten, 39, of Cottage Grove, wrote that he started spying on family “to deal with stress and fulfill a need for adrenaline” and to find out what they said about him when he wasn’t around.

That led to planting hidden cameras to capture pets, family, friends, babysitters and even his parents and grandparents, before he began spying on his students, Kruchten wrote in the letter to U.S. District Judge James Peterson, who will decide Friday how to punish Kruchten for trying to capture nude images of his students during overnight trips taken to DECA business and marketing education events.

“I made excuses or found justifications to tell myself — to see if the kids had alcohol in their rooms or if they were sneaking people in,” he wrote. “This escalated as well with more cameras and more brazen placement to increase the rush.”

He said capturing underage students in the nude was not the reason he targeted them, although he admitted he did that.

“That was not my goal when I went into teaching and it was not my goal when I started on this course of behavior,” Kruchten wrote. “My goal was not a collection of child pornography. My interest in these voyeuristic videos was not to capture students engaged in sex acts, my interest was the same (as) it was with my grandparents, and my pets and my wife — to see what people do when I’m not there.”

However, he wrote, it would be a lie to say there was “zero sexual component.”

“But I want you and everyone to know that my motivations were not that of a pedophile,” Kruchten wrote. “I was not spying on everyone in my life just in hopes of getting nude images of teenage girls. I believe I would never hurt anyone intentionally, but the reality is I put my need for adrenaline and fulfilling inappropriate curiosities above the potential impact on the victims and their families.”

He said he knows he can never fix what he did but hopes for forgiveness.

Early in the case, Kruchten wrote, he had tried to write apologies to people he had wronged, but his attorneys advised him against delivering them while the case was pending. But on the eve of his sentencing, he wrote, sending them now “seems manipulative.”

“I fear that anything I say in court will be seen that way — as just trying to escape responsibility,” he wrote. “It’s all so distorted and I hate this. The victims deserve much better.” 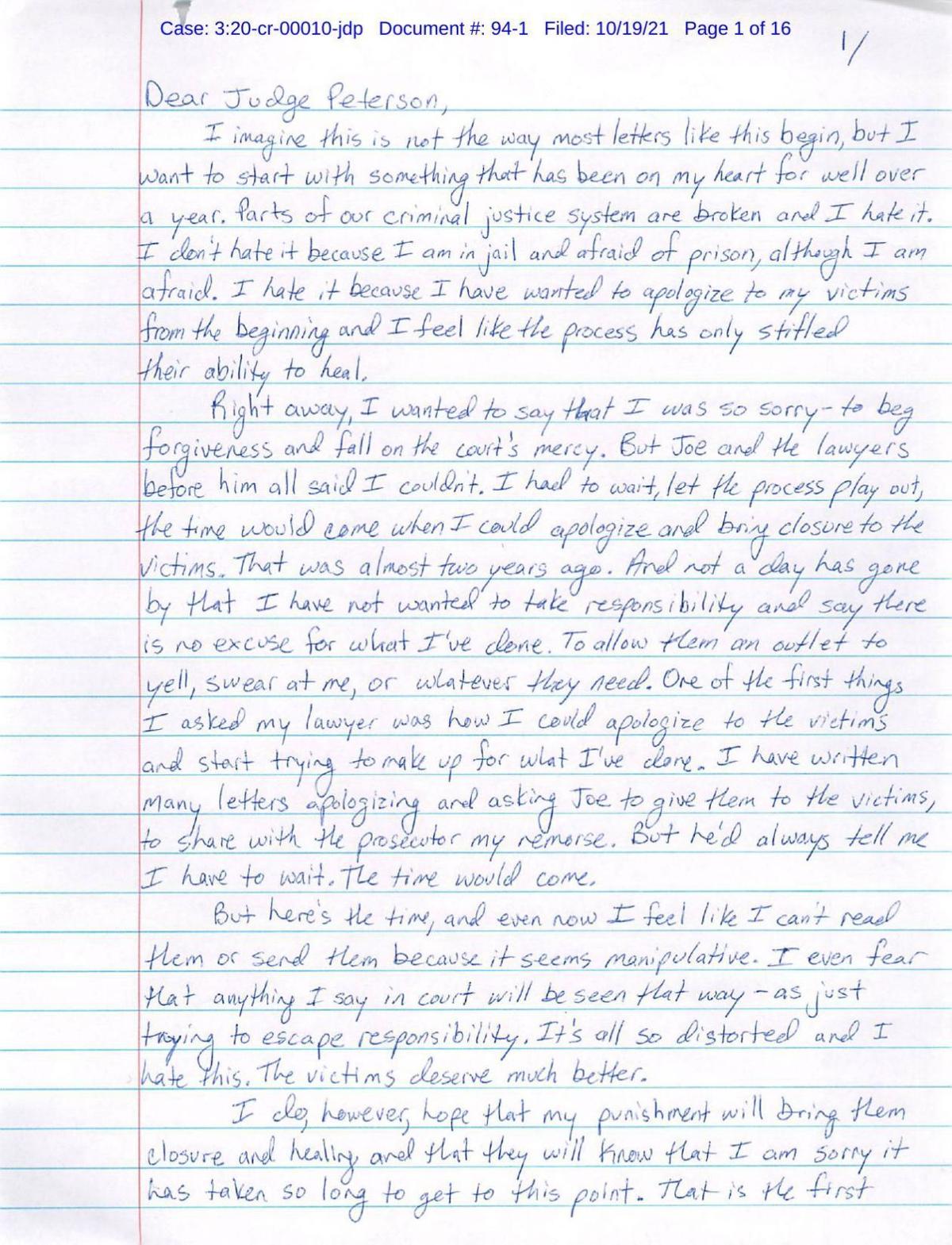 Kruchten was arrested in Minneapolis in December 2019 after a student discovered a camera hidden in a hotel room bathroom air freshener. Other students then looked around and found cameras hidden in air fresheners, smoke detectors and other devices.

A subsequent Wisconsin Division of Criminal Investigation probe found recording devices had been placed in students’ hotel rooms during other trips, to Wisconsin Dells and Lake Geneva, before the Minneapolis trip.

A plea agreement under which Kruchten pleaded guilty to attempting to produce child pornography states that all students who have been on trips chaperoned by Kruchten since 2016 are considered victims and have the right to be heard before he is sentenced.

Victim impact statements, all filed under seal, have been pouring into Kruchten’s court file, and a number of victims are expected to speak at his sentencing on Friday.

Kruchten faces a sentence of anywhere from six to 20 years in prison, according to the agreement. His attorney, federal defender Joseph Bugni, wrote in a sentencing memorandum he will seek a six-year sentence. Assistant U.S. Attorneys Elizabeth Altman and Laura Przybylinski Finn asked in their memorandum for a 15-year sentence.

Prosecutors wrote that Kruchten was known to victims who trusted him and was respected by parents and the school district.

“While there is no evidence he touched any student, his actions left the victims questioning their future and doubting their self-worth,” the prosecutors wrote. “Prior to being discovered by one of those victims, there was no indication that the defendant had any intention of stopping. He deserves a sentence that reflects the full impact of his actions.”

“I was vulnerable and he recognized that,” one victim quoted in the prosecutors’ memorandum wrote. Another wrote: “I loved him, but now I’m mourning the person that I thought he was while I’m forced to re-evaluate every aspect of my relationship with him. I feel so used. I feel unsafe. I feel like I lost my optimism about the world.”

The nature of the recordings Kruchten created are unknown, the prosecutors wrote, because he destroyed the evidence. Still, he “committed one of the most serious violations of trust imaginable,” they wrote.

“This was not a one-time failure,” they wrote. “It was a deliberate, calculated and repeated course of conduct.”

While he claims he only brought cameras on DECA trips to monitor student behavior, the cameras invariably ended up in the bathrooms of female students, prosecutors wrote.

He had inappropriate late-night talks with students about how unhappy his marriage was and about which teachers were having affairs. He once showed up at a former student’s birthday party uninvited and had to be forced to leave, they wrote.

“The defendant is in certain respects every parent’s worst nightmare: a predator hiding in plain sight,” they wrote. “The defendant’s ‘normalcy’ is what makes him so dangerous.”

Bugni, in his sentencing memorandum, pushed back against the “predator” label. He wrote that Kruchten did not get into teaching in order to prey on students.

“Rather, he’s a person who was (by all accounts) an excellent friend and teacher who succumbed to an ever-growing obsession that soon overcame and eventually ruined him,” Bugni wrote.

His voyeurism wasn’t motivated by pedophilia, Bugni wrote, but the rush he got from secretly recording people. He said Kruchten set cameras not only in girls’ rooms but boys’ rooms as well. There wasn’t a single factor that motivated him, Bugni argued.

“The fact that there was sexual arousal attached to some of this conduct doesn’t mean that all of this was driven by a sexual desire for nude images of minors,” he wrote. “And he shouldn’t be punished as severely as those who target children and have insatiable pedophilic disorders.”

Peterson should consider the fact that Kruchten was for most of his life a productive and pro-social person, Bugni wrote, who according to letters of support did good turns for people in need, which should not be “wiped out by his crime.”

“The point is not that Kruchten was a good teacher and a good person, so he gets a slap on the wrist — not at all,” Bugni wrote. “It’s that he has demonstrated decades of good character and selfless devotion to the community and that demonstrated commitment (and all that attends to it) speaks to the fact that a longer term of incarceration isn’t needed to accomplish the goals of sentencing — instrumental or moral.”

'Tragic accident': 3 killed in I-94 crash struck after getting out of vehicles, authorities say

Complaint: Witness heard as many as 15 shots in murder at Madison gas station

Man shows up at hospital with gunshot wounds after shooting on East Side, Madison police say

Who are they? WI children reported missing as of October 22