Spending on law enforcement in Wisconsin made up a slightly larger percentage of city budgets in 2018 than it did more than 30 years ago, even as crime overall declined during that period, according to a report issued Monday.

At the same time, spending on police ranks far behind the amount in local tax dollars going to K-12 education and public welfare programs.

The report by the nonpartisan Wisconsin Policy Forum comes amid nationwide protests against what some see as an epidemic of brutality and racism in law enforcement after the May 25 death of George Floyd in Minneapolis police custody, and as some protesters call to “defund police” — although with different ideas about what exactly that means. 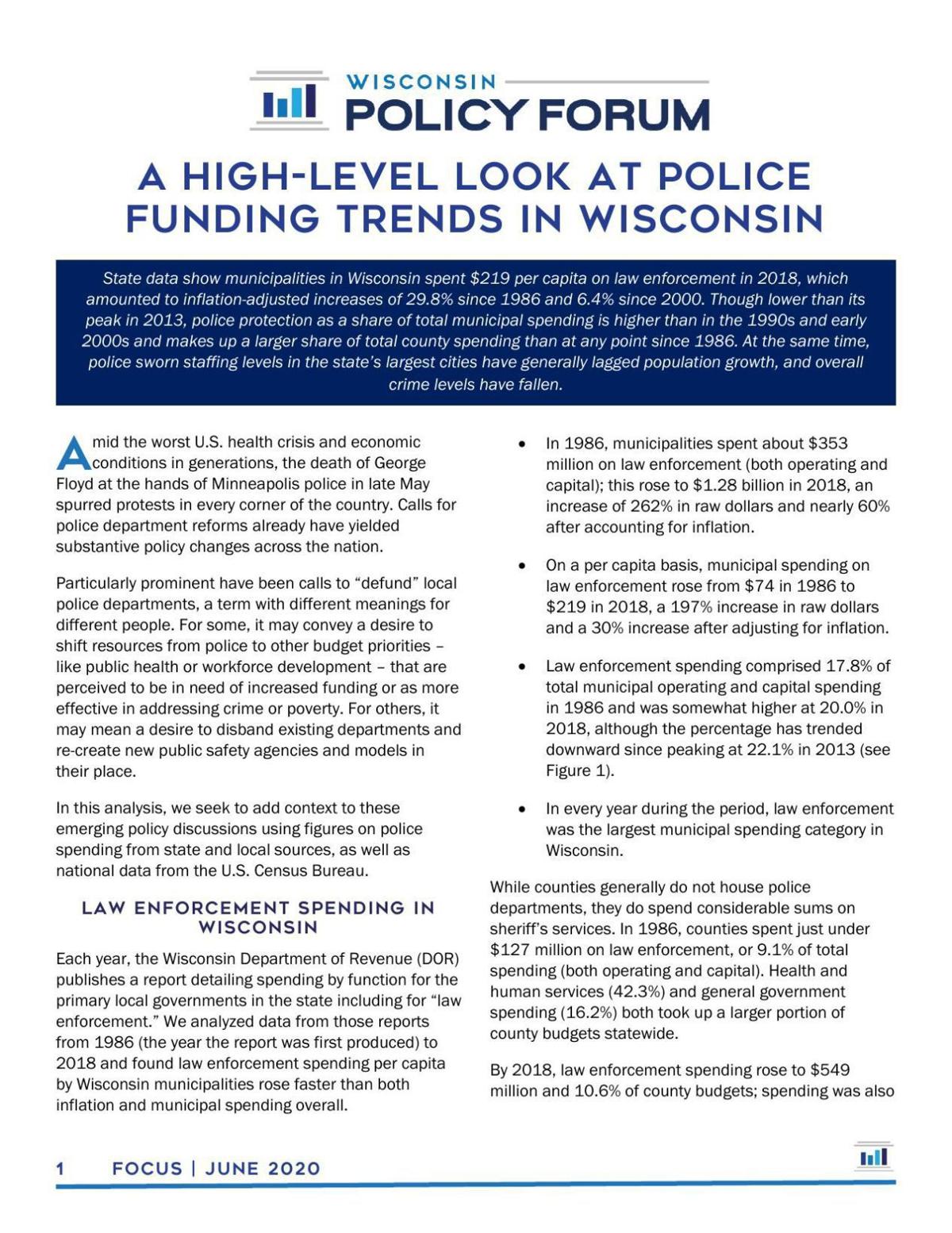 Crime over that same period was down by nearly 55%, although the entire decrease is attributable to a sharp decline in property crimes. Violent crime — such as murder, rape and aggravated assault — actually increased from 258 offenses per 100,000 people in 1986 in Wisconsin to 295 per 100,000 in 2018.

A changed landscape, worry and hope on State Street in wake of protests, amid COVID-19 pandemic

In Wisconsin and 22 other states, spending on city police makes up the largest share of city budgets, and for 18 other states it’s the second-largest expenditure, according to the report. But the Policy Forum also noted that in comparison with all other forms of local government spending in Wisconsin, policing ranks third behind public K-12 education — which cost about $10 billion in tax dollars in 2017 — and public welfare programs.

In Madison, the number of sworn police officers rose by about 5.4% to 482 from 2015 to 2020, according to the Policy Forum, or in line with the growth in the city’s population. It also looked at FBI data for Wisconsin’s 10 largest cities and found that “while police staffing levels in those cities generally increased during the past decade, they have not necessarily kept pace with the growth in population.”

“While six of the 10 cities saw slight overall increases in their sworn staff, only three — Racine, Oshkosh and Janesville — increased their per-capita levels,” the report said.

Photos: Madison protesters stand against police brutality with “Glow in the Dark March”

Photos: Madison protesters stand against police brutality with 'Glow in the Dark March'

‘Giant Arc’ of galaxies raises questions about the Cosmological Principle

How to watch the last Supermoon of 2021

How to watch the last Supermoon of 2021

The funds were diverted back in 2019 to help pay for border barriers as part of Trump’s national emergency declaration.

The former Ganser Dance Hall, a family home for the past 20 years, is removed but Dane County officials have begun organizing in an effort to find a solution for the northwestern Dane County lake.

The new kinds of workers would join dentists, hygienists and dental assistants in providing dental care.

About 70 employees were evacuated safely from the plant, and one firefighter suffered a minor injury.

“I think of it as disrupting the very front of the school to prison pipeline,” Lambert said. “I’m trying to get out in front of those processes that alienate kids from school and drive them into other oppressive systems.”

The UW System is eliminating its monthly payroll cycle and will instead pay all employees every two weeks, a change that affects nearly 33,000 UW employees.

Tiffany said making Juneteenth a federal holiday would only further divide the nation.

The Wisconsin Department of Health Services is now tracking the Delta variant as a "variant of concern" in the state because of its increased transmissibility and potential to be more resistant to vaccines than COVID-19.

Scott Walker: GOP needs focus on fundamentals, rather than any one personality like Trump

A northern Illinois chemical plant was inspected by a federal agency less than a month before it was rocked by an explosion and massive fires that prompted evacuations and sent debris raining onto nearby areas.