Crews searched Wednesday for the pilot of a Madison-based F-16 Fighting Falcon jet that crashed Tuesday night in the wilderness of Michigan’s Upper Peninsula during a scheduled training exercise.

It was not known if the pilot, with the Wisconsin Air National Guard’s 115th Fighter Wing at Truax Field, ejected from the aircraft just prior to it crashing about 15 miles northwest of Manistique, Michigan, and 250 miles from Madison at around 8 p.m.

“The status of the pilot is still unknown,” Capt. Leslie Westmont, of the state Department of Military Affairs, told the State Journal on Wednesday.

Westmont said the 115th Fighter Wing participated in a coordinated search effort with local emergency responders, the U.S. Coast Guard and other government agencies shortly after the crash and through Wednesday on the ground, in the air and in the water. The crash site, located in Delta County, Michigan, was initially secured by local emergency responders, but “military personnel and safety and security personnel from the 115th Fighter Wing are now on site,” Westmont said.

Additional personnel were scheduled to be sent to the area to help facilitate the safety and security of the crash site, which Delta County Sheriff Ed Oswald said is in the county’s northeastern corner in a rural area within Hiawatha National Forest. Oswald said the area is “very remote with no cellphone service.”

The closest community to the crash site is the small village of Steuben, in adjacent Schoolcraft County, Oswald said.

The search also included the Civil Air Patrol and, according to reports, a specially equipped Air Force KC-135.

“We are a close knit family and when an incident like this occurs, every member in our organization feels it,” said Col. Bart Van Roo, commander of the 115th Fighter Wing. “The safety of our pilot along with search and rescue efforts are our top priority, and we will continue to pray for the pilot’s safe return.”

Officials have not said if they know what caused the aircraft to crash. The temperature in the area of the crash was in the mid-40s Wednesday with an expected low of 29 degrees by early Thursday morning.

Alice Sabuco lives on the north side of Mahskeekee Lake in a heavily wooded but flat area of the Hiawatha National Forest north of Highway 2 and about 15 miles northwest of Manistique, Michigan. Sabuco said Michigan State Police, the Department of Natural Resources and other search crews were in the area Wednesday morning along with heavy equipment and may have been headed toward Stevens Lake, about five miles to the north. She also spotted a U.S. Coast Guard helicopter flying overhead “doing an almost grid search.”

Sabuco said it’s common for fighter jets to fly overhead but she and her husband did not hear a crash Tuesday evening. However, two neighbors across the lake said they heard a “big boom and rumble,” she said.

“It was about 8 p.m. and all of a sudden all of these jets just started going over maybe 20 (to) 25 times … over our place and the woods right behind us,” Sabuco told the State Journal by phone Wednesday morning. “I hope the pilot made it. If he ejected behind us, there’s tons of small and large lakes. If you came down with a parachute in all these trees you could be stuck in a 100-foot tree.”

Gov. Tony Evers, in a statement Wednesday morning, said he was “devastated” to learn of the crash.

“As search and rescue operations continue, Kathy and I are hoping and praying for the pilot’s safe return,” Evers said. “Our hearts go out to pilot’s family as well as the members of the 115th Fighter Wing as they continue working to bring the pilot home.”

The crash occurred on the second of four consecutive days of training operations scheduled to conclude Thursday, according to a post Sunday on the 115th Fighter Wing’s Facebook page.

“Area residents may see or hear F-16 fighter jets taking off or landing until approximately 10:00 p.m. Training flights normally take place during daylight hours, but pilots and maintenance personnel are required to conduct evening/nighttime operations as part of their overall readiness. Pilots will follow flight paths designed to minimize noise to area residents,” the post said.

According to the 115th Fighter Wing’s website, the F-16 Fighting Falcon is a “compact, multi-role” fighter aircraft with an “all-weather capability” that allows it to deliver ordnance during non-visual bombing conditions.

In 2011, a pilot, who had taken off from Volk Field near Camp Douglas, ejected over Adams County before his F-16 slammed into a vacant vacation home near Oxford. The pilot escaped with minor injuries, and nobody on the ground was hurt. However, the incident resulted in training flights being grounded to ensure there was nothing wrong with fuel, procedures or equipment that could cause a repeat of the crash.

In 1995, a plane piloted by John Wasserburger, who was on a training exercise over northwest Wisconsin, had his engine stall. He pulled the jet up to gain altitude and give himself more time to try to restart the engine. But as the jet slowed and began to fall, he had to bail out. Just before ejecting, he pointed the jet’s nose down to minimize the distance it would travel before crashing into woods south of Eau Claire.

“It makes a pretty loud shudder, and then you get almost every warning light on in the cockpit,” Wasserburger told the State Journal in 2011. “Everything happens pretty quick.”

The Air Force announced in April that Truax will receive a fleet of 18 new F-35 fighter planes to replace its 21 aging F-16s in 2023. Madison residents who live near the base have complained that the new jets will be so loud they won’t be able to live in their homes.

A collection of letters to the editor about the prospect of the 115th Fighter Wing of the Wisconsin Air National Guard operating the new F-35 fighter jets at Truax Field in Madison.

As a businessperson and a resident of the North Side of Madison I am highly supportive of the F-35 project because it would assure the continuation of our Air National Guard 115th Wing at Truax Field. This tremendous community asset provides economic impact, valuable emergency services, and the employment of more than 1,200 military and civilian personnel.

I appreciate State Journal's coverage of the proposal to bring F-35 fighter jets to Truax Field. I am a nurse serving a neighborhood adjacent to the airport and am deeply concerned about the public health implications of this program.

Letter to the editor: "It's about Truax Field, the 115th Fighter Wing and protecting of all the citizens of the United States and our neighbors to the north and south. Strategically, we are in an optimum location to do this."

Jets are a poor fit for Madison -- Paul Reckwerdt

Imagine our government putting a factory next to your house that emits randomly up to 121 decibels of window rattling noise, lowers your property values, and has a chance of spraying your yard with fuel oil or blowing up and perhaps taking out a large swath of our town. Also imagine this factory has helped pollute one of our city's wells enough that it had to be closed.

To all of the people who live near the airport and are upset about the F-35s -- if you bought you home after 1939, you knew the airport was there.

Letter to the editor: Forget the noise (although it is torture for those of us with tinnitus). An inconceivable amount of our money -- more than a trillion of our tax dollars -- is being used to build machines whose sole purpose is to kill and destroy.

Welcome the F-35 into our community -- Walter Fitzgerald

Letter to the editor: "I care about a clean environment, but I care about people and jobs more."

Those affected by F-35 will need help -- Mike Shivers

I read Pat Richter's opinion piece, "Just another weekend for the 115th Fighter Wing," in the Aug. 26 State Journal, and it was very good. However, it did not address why we East Side residents are concerned about the F-35s: the noise factor and our quality of life.

F-35s do not belong in an urban area -- Sandra Abitz

Is it wise to render entire neighborhoods uninhabitable? Is it wise to lower the quality of life with noise-related stress and health risks? Is it wise to cause properties to devalue for entire communities of homeowners?

For the last 40 years I've had a quote from President Dwight D. Eisenhower on my refrigerator door. It is from his "Cross of Iron" farewell message, which he delivered at the end of his presidency. In it, he warned that the military industrial complex will impoverish our country, spending our wealth on guns, warships and rockets. His warning has gone unheeded pretty much up to now.

Letter to the editor: "The plan to bring F-35 fighter jets to Madison's Truax Field raises many concerns."

We are very disappointed in the many Madison and Dane County elected officials who have failed to state their views on the proposed F-35s at the Dane County Regional Airport.

Urban area a poor fit for air base -- Lisa Luedtke

While I understand why some residents may welcome F-35s at Truax Field, I question whether it makes sense to intensify aircraft activity in and out of this base, which is now in the midst of a large and growing urban population.

Madison is lucky to have fighter wing -- Otto Gebhardt

I would like to show my support for the 115th Fighter Wing and for them being selected for the F-35 mission. The people who work there are good members of our community.

If you support our armed forces like I do, please consider showing your support for the F-35 expansion coming to Madison. A small yet vocal contingent is willing to do anything in their power to shut down this golden opportunity for our community.

Wednesday's letter to the editor "Fighter wing is key asset to state" gushed enthusiastically about the possibility of having F-35s based here in Madison, calling their thunderous racket “the sound of freedom.”

Region should be proud of 115th Fighter Wing -- Dave McLean

I have lived within a few minutes of Truax Field in Madison for over 35 years. Our home is in the flight path of the planes and jets flying in and out of the airport. The noise from the jets doesn’t bother us at all.

The Air Force has released its draft environmental impact statement for locating a squadron of F-35A fighter jets at two locations.

In 2016, President Obama visited Hiroshima and called “for a world without nuclear weapons.” We can contemplate this calling during the August anniversary of the horrendous bombings of Hiroshima and Nagasaki and of the suffering of the Japanese people there.

People in our East Side neighborhoods are concerned about the possible use of Truax Field as headquarters for the F-35 fighter jets.

Putting the F-35 fighters in Madison makes us more at risk of counter-strike targeting, not safer.

The crash occurred during a scheduled training exercise within Michigan's Hiawatha National Forest. The cause of the crash remains under investigation. 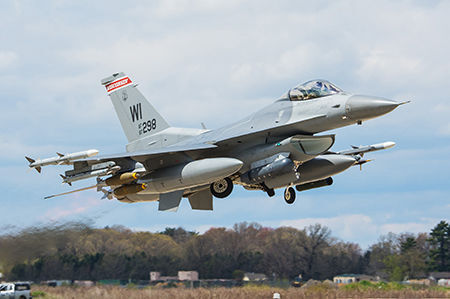 An F-16 Fighting Falcon loaded with munitions from the 115th Fighter Wing based in Madison takes off for a mission May 6, 2019 at Volk Field. 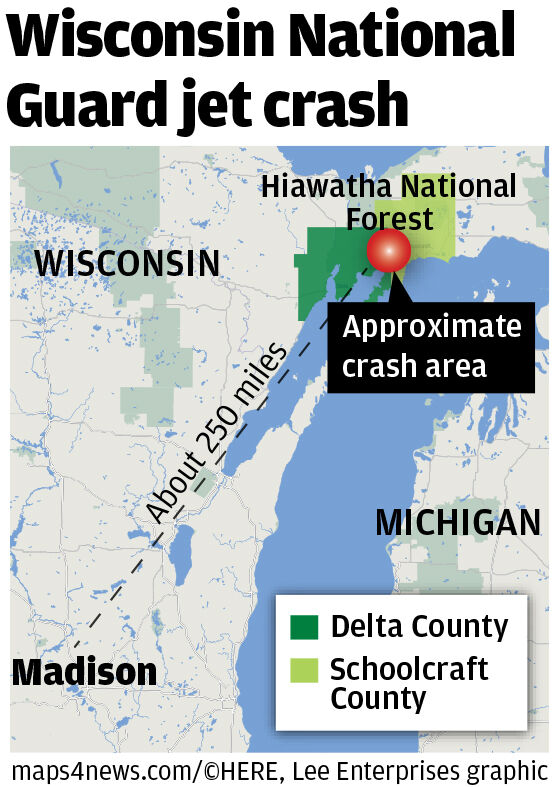