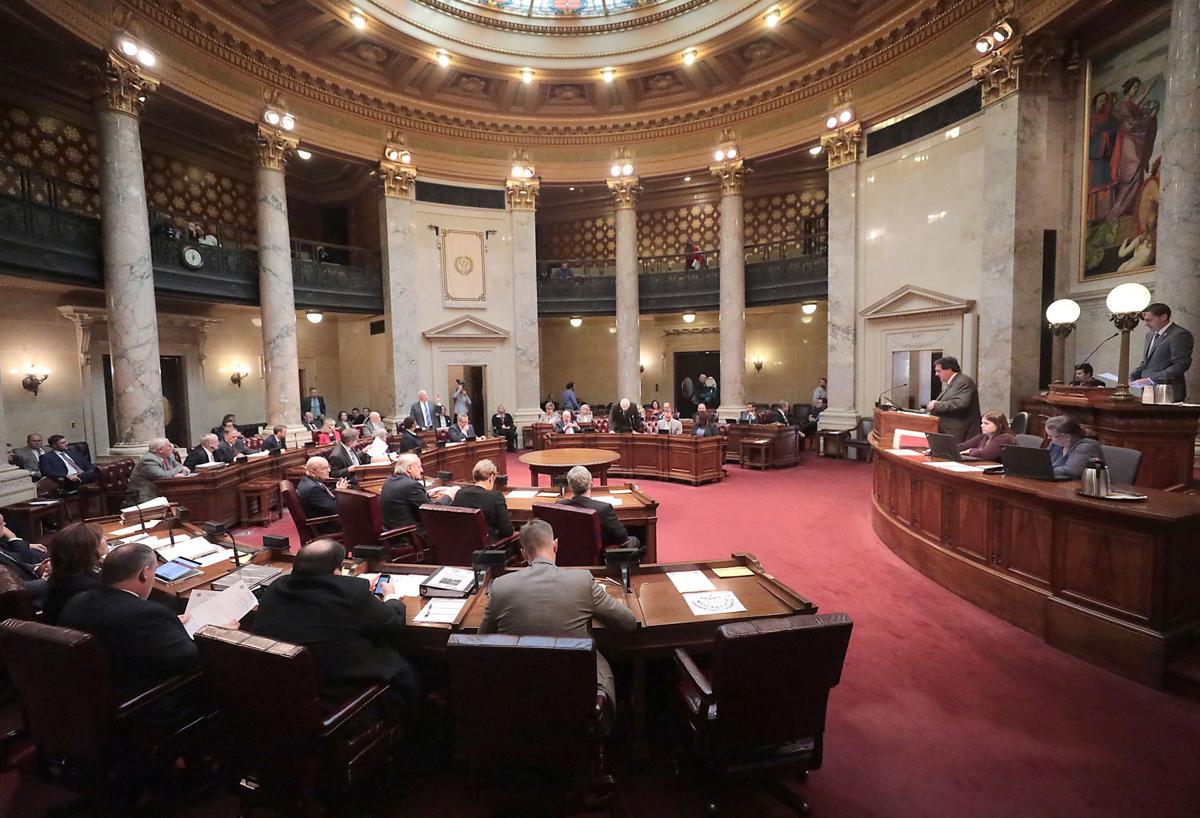 The state Senate met for the last time before winter without taking up a package of bills that would commit more state resources to addressing homelessness. 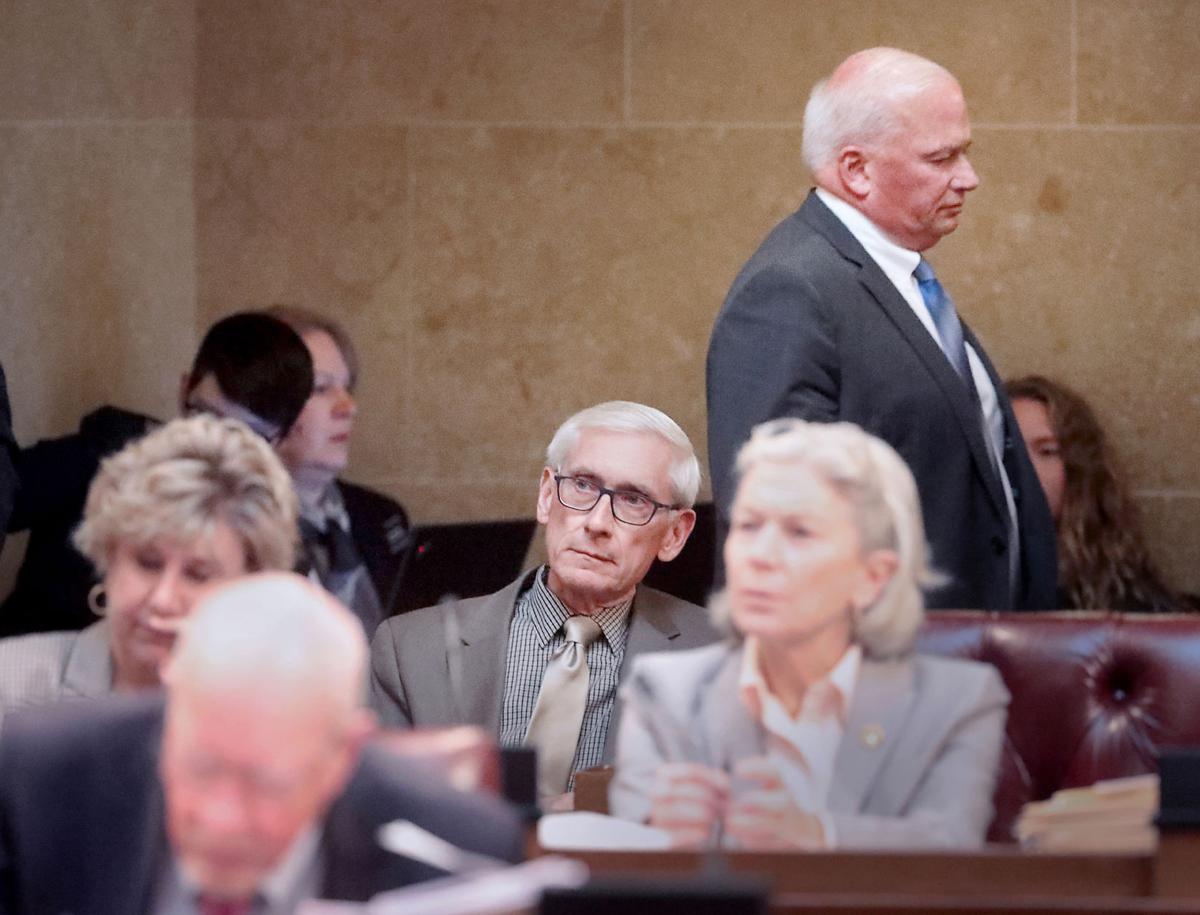 Gov. Tony Evers, seated at center, listens to a Senate debate on his pick to head the Department of Agriculture, Trade and Consumer Protection. Senate Republicans, led by Majority Leader Scott Fitzgerald, standing at rear, rejected the pick, the first time such a move has occurred in at least three decades. 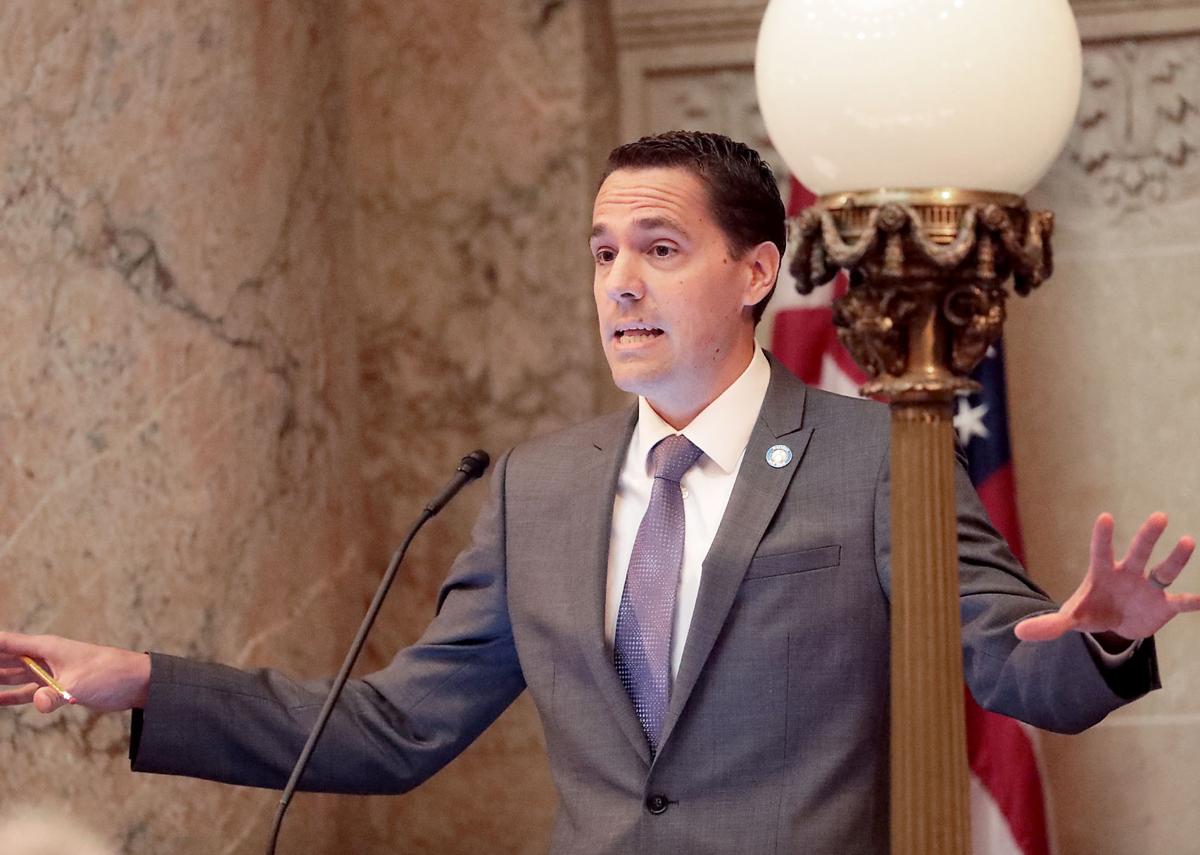 Senate President Roger Roth, R-Appleton, rules that lawmakers cannot read past statements that other lawmakers made in committee during a debate about whether to confirm one of Gov. Tony Evers' cabinet picks. Five Republican senators changed how they voted in committee to reject the nomination. 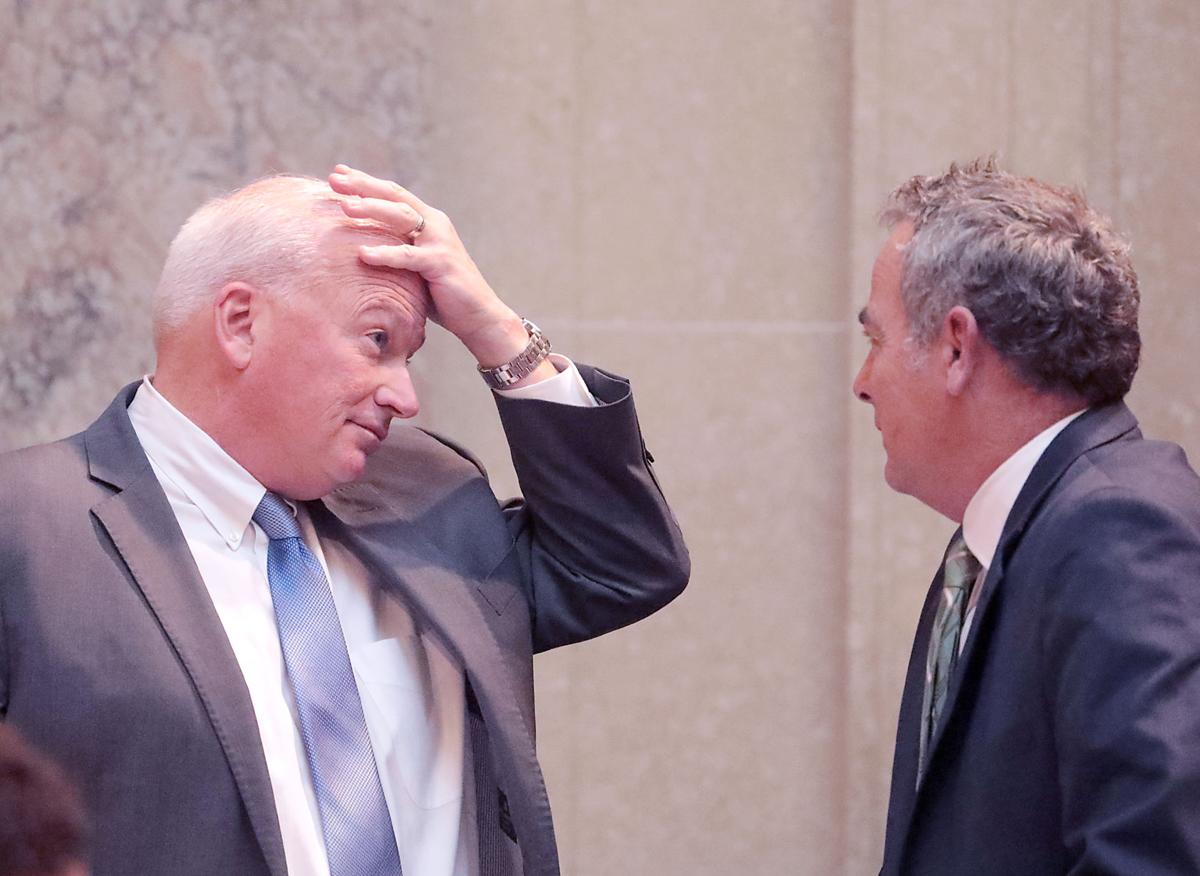 The denial of Brad Pfaff's nomination to head the Department of Agriculture, Trade and Consumer Protection comes after a last-ditch effort by several Democratic lawmakers and agricultural groups to secure Pfaff’s job. The vote marks the latest partisan clash between Evers and Republicans, who hold the majority of the Legislature.

The Senate voted 19-14 along party lines to deny Pfaff’s nomination, with all five Republicans who voted in favor of Pfaff in committee — Howard Marklein, of Spring Green; Jerry Petrowski, of Marathon; Patrick Testin, of Stevens Point; Andre Jacque, of De Pere; and Kathy Bernier, of Chippewa Falls — changing their votes Tuesday.

A governor’s appointee has not been denied by the Senate since at least 1987, according to the Legislative Reference Bureau.

Evers told reporters he attended the Senate floor session to hear arguments for and against Pfaff, whom he regards as "one of the most distinguished agriculture leaders" in the state.

His appearance is likely the first time in modern history that a Wisconsin governor was present for a floor vote. A staffer for Sen. Fred Risser, D-Madison, who was first elected to the Legislature in 1956, said the senator could not recall a Wisconsin governor ever being present for a Senate floor session, although former Democratic Gov. Patrick Lucey once phoned him on the floor.

After the vote, Evers expressed his stern disapproval, peppered with expletives, and lamented what he said was a chilling effect the Senate’s action might have for cabinet secretaries who are not yet confirmed. Pfaff was fired ostensibly for offending Republicans in comments this summer.

"If I was a total cynic, I’d say keep your damn mouth shut," Evers told reporters. "But I’m not. I want them to be forthcoming. I want them to be professional. That’s why we hired them. They’re the best people for the job. And to think that they’re going to have to keep their mouth shut for the next four years in order to get approved by this Senate, that is just absolute bull****.”

In a statement after the vote, Senate Majority Leader Scott Fitzgerald, R-Juneau, said Pfaff was "was part of the problem, not the solution."

"The liberal Evers Administration has been no friend to farmers," Fitzgerald said. "The Senate will continue to take its role of oversight seriously and will exercise our responsibility to hold them in check."

Others may lack support

While future leadership for DATCP has not been determined, Evers hasn’t ruled out elevating current deputy secretary Randy Romanski to the role of secretary and giving Pfaff Romanski’s job.

After Tuesday's vote, Evers said he doesn’t know who he’ll appoint as the new agriculture secretary.

“I can’t even speak about that now, I’m so PO'd about … what happened today,” Evers said.

All five Republicans who supported Pfaff in committee refused to respond to questions posed by Democratic senators about their committee votes. Sen. Jon Erpenbach, D-West Point, said there was "absolutely no excuse" for their votes Tuesday.

"Those five senators are going to have to go back to their districts," Erpenbach said. "There is no explaining this away."

In addition, Senate President Roger Roth, R-Appleton, ruled that comments made in committee by one of the Republican senators could not be shared on the floor by a Democratic senator, blocking Democrats from reading those comments into the official record Tuesday.

Sen. Stephen Nass, R-Whitewater, summed up the change in votes as lawmakers changing their minds.

"It’s OK to recognize things have changed and you need to divert from your chosen course and to another option," Nass said. "We will be remembered for doing our job. That's what we were elected to do, and that’s what we are doing today."

After the vote, Marklein said in a statement that he has been disappointed in Pfaff since he and other committee members approved Pfaff's nomination in February.

"At the time, I was hopeful that Mr. Pfaff would be a positive, strong leader for an agency that has traditionally been nonpolitical and focused on the industries it supports," he said in the statement.

"Mr. Pfaff has played politics with information and has attacked the Legislature to the detriment of his agency. He was willing to use political talking points to further a political agenda, when he should have been focused on doing what is best for farmers and consumers."

Pfaff, who served as deputy administrator for farm programs in the U.S. Department of Agriculture under former President Barack Obama and most recently was deputy chief of staff for U.S. Rep. Ron Kind, D-La Crosse, drew the ire of some Republicans in July when he criticized the Legislature’s budget committee for failing to release funds for mental health assistance to farmers and their families.

Noting DATCP had funding at the time for just five mental health counseling vouchers for farmers while the suicide rate among farmers was rising, Pfaff told committee members they had a choice to make: "Which five farmers will it be."

At the time, Fitzgerald called the comment “offensive and unproductive.”

DATCP also has also been under fire for proposed updates to the state’s farm siting regulations. The proposed regulations would update the state’s nearly 14-year-old livestock facility siting rule ATCP 51, which is used by participating local governments to set standards and procedures — focused on setbacks from property lines, management plans, odor, nutrient and runoff management, and manure storage facilities — that must be followed by new or expanding livestock facilities.

On Friday, Fitzgerald told Evers to withdraw Pfaff’s nomination — an action equivalent to firing him — because Fitzgerald didn’t have the support from his 19-member caucus to confirm Pfaff.

Evers acknowledged Tuesday that the DATCP board suspended a Thursday vote on the controversial farm siting regulations in an effort to appease Republican senators.

"We tried to get to a point where we could get some support," Evers said. "Obviously it didn’t make any difference."

Both Kind and U.S. Sen. Tammy Baldwin, D-Madison, also this week expressed support for Pfaff and urged the Senate to approve his nomination.

Two other cabinet secretaries up for a vote Tuesday, Mark Afable, commissioner of insurance, and Rebecca Valcq, chairwoman of the Public Service Commission, were approved by the Senate.

A governor’s appointee has not been denied by the Senate since at least 1987, according to the Legislative Reference Bureau.

The bill would ensure each law enforcement agency in the state has a use of force policy that meets certain requirements.

The state, which started releasing names of nursing homes with active investigations three weeks ago, hasn’t disclosed how many cases each facility has had.

'This morning is what Madison is': Hundreds help clean up after 75 stores vandalized

Volunteers swept broken glass, scrubbed graffiti and helped city workers right toppled planters along the pedestrian mall, where Madison police said about 75 businesses were looted or damaged during the riot, in which a police squad car was torched.

Group shuts down Beltline to protest George Floyd's death and others

Police are monitoring the situation rather than taking action to break up the protest.

Under state law, UW campuses cannot begin classes until after Sept. 1. But other colleges are starting the semester early to get students home by Thanksgiving in response to COVID-19.

Crowd remains as the Downtown curfew passes, and so does the peace

Police reported there were multiple break-ins and looting at stores outside the Downtown as well.

15 arrested after second night of protests, looting in Downtown Madison

A man police believe was among the protesters also accidentally shot himself in the leg.

The state Senate met for the last time before winter without taking up a package of bills that would commit more state resources to addressing homelessness.

Gov. Tony Evers, seated at center, listens to a Senate debate on his pick to head the Department of Agriculture, Trade and Consumer Protection. Senate Republicans, led by Majority Leader Scott Fitzgerald, standing at rear, rejected the pick, the first time such a move has occurred in at least three decades.

Senate President Roger Roth, R-Appleton, rules that lawmakers cannot read past statements that other lawmakers made in committee during a debate about whether to confirm one of Gov. Tony Evers' cabinet picks. Five Republican senators changed how they voted in committee to reject the nomination. 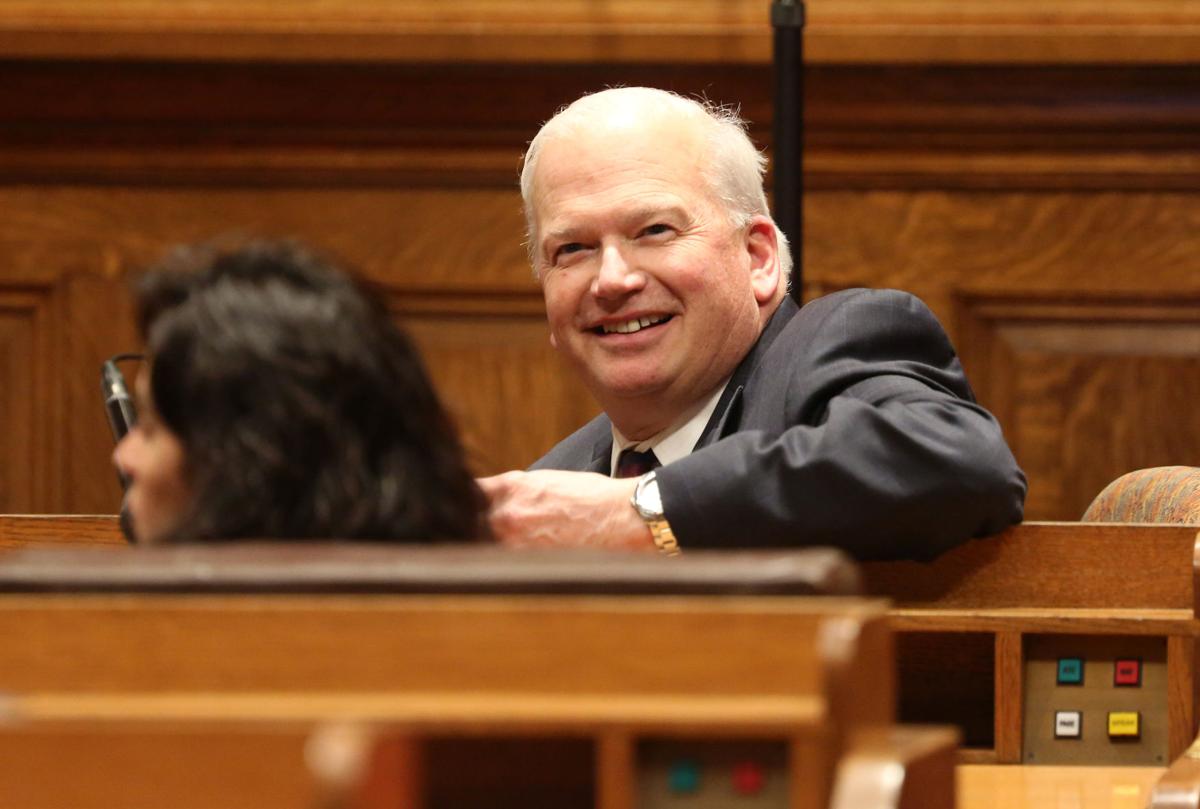 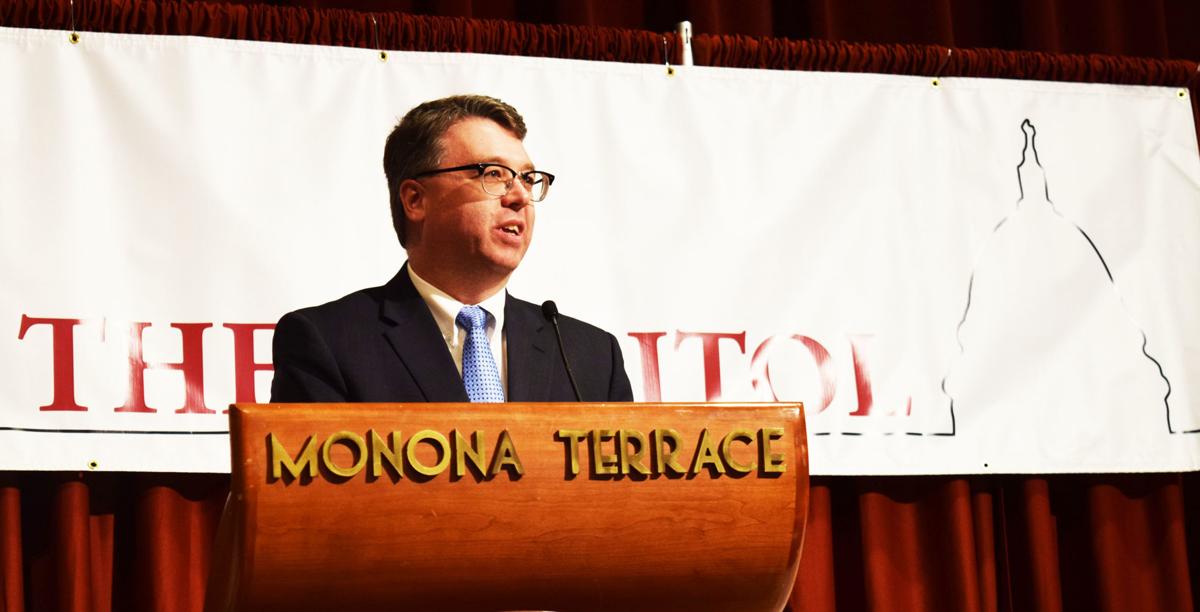