Become a Member
Read Today's E-edition
Share This
Spelling it out: Watch the 2019 Badger State Spelling Bee
0 Comments
Share this 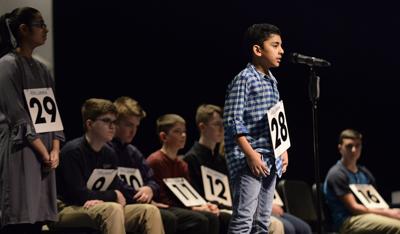 The competitors will vie to represent the state at the 2019 Scripps National Spelling Bee, held May 27-30, in National Harbor, Maryland, just outside Washington, D.C.

The top three spellers from Saturday’s state bee, sponsored by the Wisconsin State Journal, will advance to the Scripps National Spelling Bee.

Saturday's bee begins at 1 p.m. and is free to attend.

Get to know the 2019 Badger State Spelling Bee participants

Learn more about the 47 students from across Wisconsin competing Saturday in the Badger State Spelling Bee, which kicks off at 1 p.m. at Madis…

Contestants have competed in school- and regional-level bees, the latter of which are organized by the state’s 12 Cooperative Educational Services Agencies, plus the Madison All-City Spelling Bee, which is also sponsored by the State Journal.

Former Badger State Spelling Bee champion Brad Williams will be the pronouncer. Now a radio journalist in La Crosse, Williams won the state bee in 1969 when he was 12. He has been pronouncing at the state level for 40 years.

Judges include Jenny Price, an instructor in the UW-Madison School of Journalism and Mass Communication; Kelly Meyerhofer, higher education reporter for the State Journal; and Joyce Kaping, who is retired from the Association of Wisconsin School Administrators and a longtime spelling bee judge. The bee coordinator is State Journal features reporter Gayle Worland.

Words this year included marzipan, a sweet confection; zephyr, a gentle breeze; khor, a dry ravine; and harpsichord, a keyboard instrument with strings.

The top three spellers will receive a trip for two to the Scripps National Spelling Bee from the Wisconsin State Journal; the Samuel Louis Sugarman Award, a 2019 United States Mint Proof Set, from Jay Sugarman in honor of his father; the Merriam-Webster’s Collegiate Dictionary, Eleventh Edition, from Merriam-Webster; and a one-year subscription to both Britannica Online Premium and Merriam-Webster Unabridged Online.

Watch online: Visit go.madison.com/spellingbee2019 or the Wisconsin State Journal's Facebook page to watch complete coverage of the event, including a live stream during the competition.

Hanna Ghouse and Immanuel Goveas were crowned co-champions of the 2018 Badger State Spelling Bee Saturday after organizers ran out of words to spell.