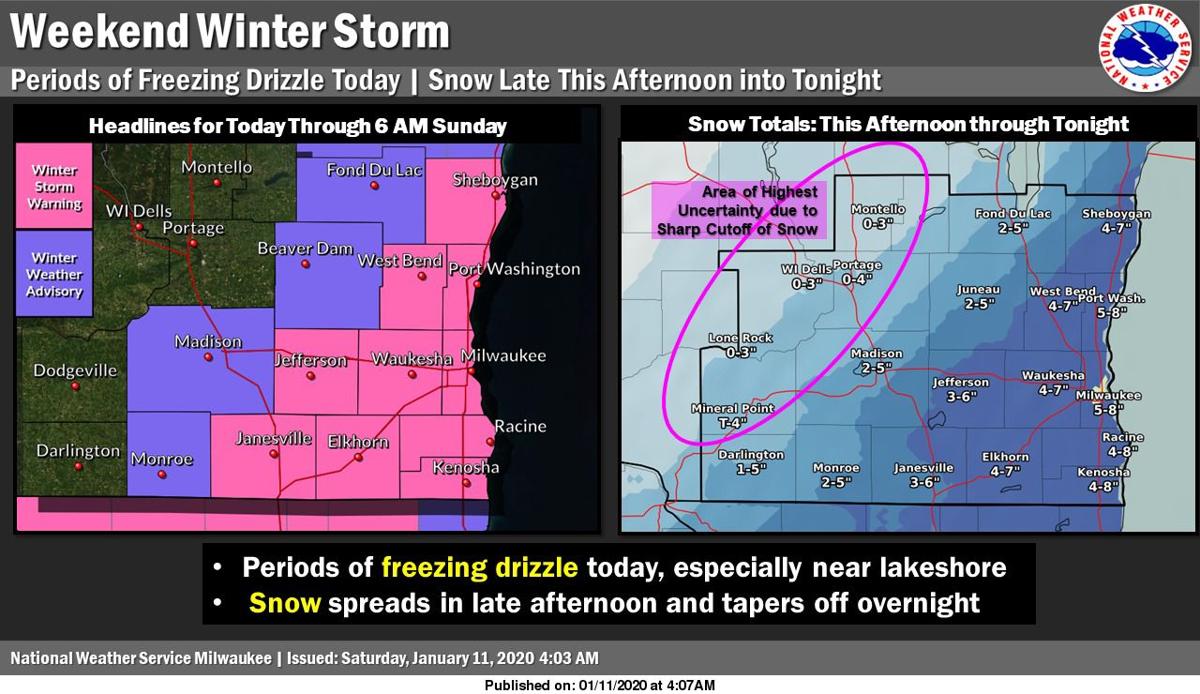 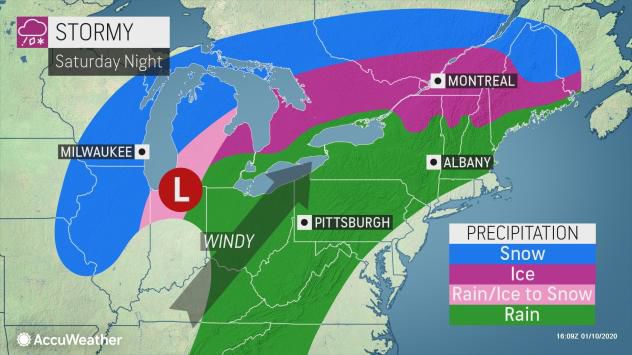 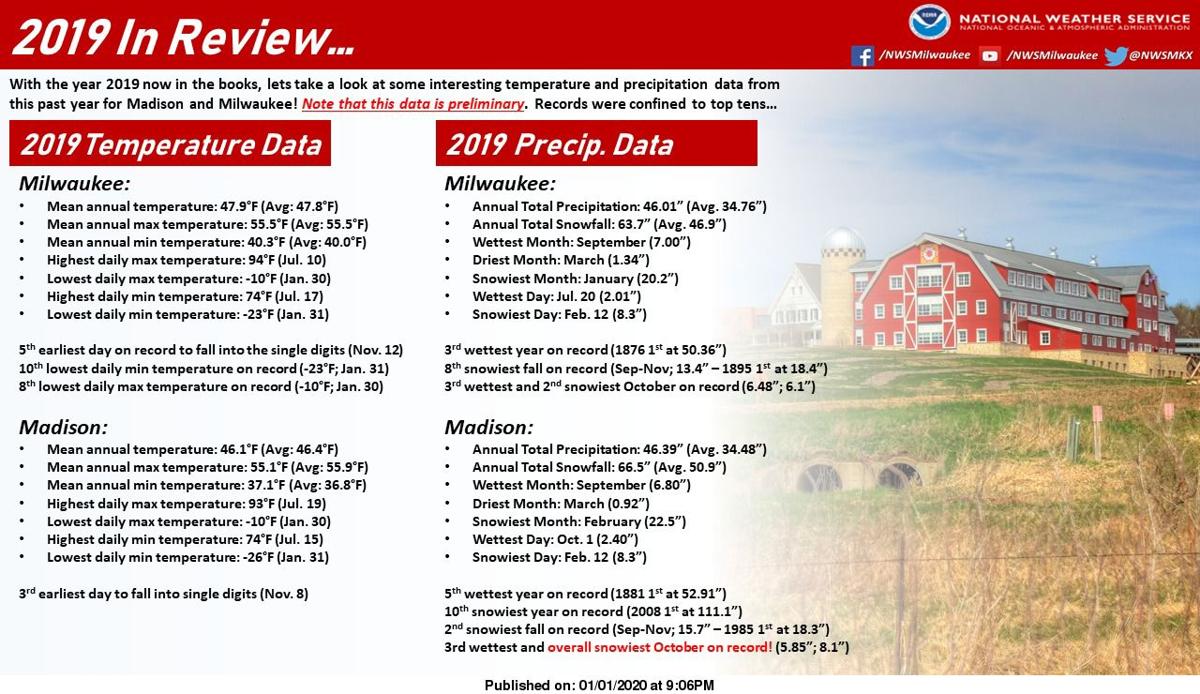 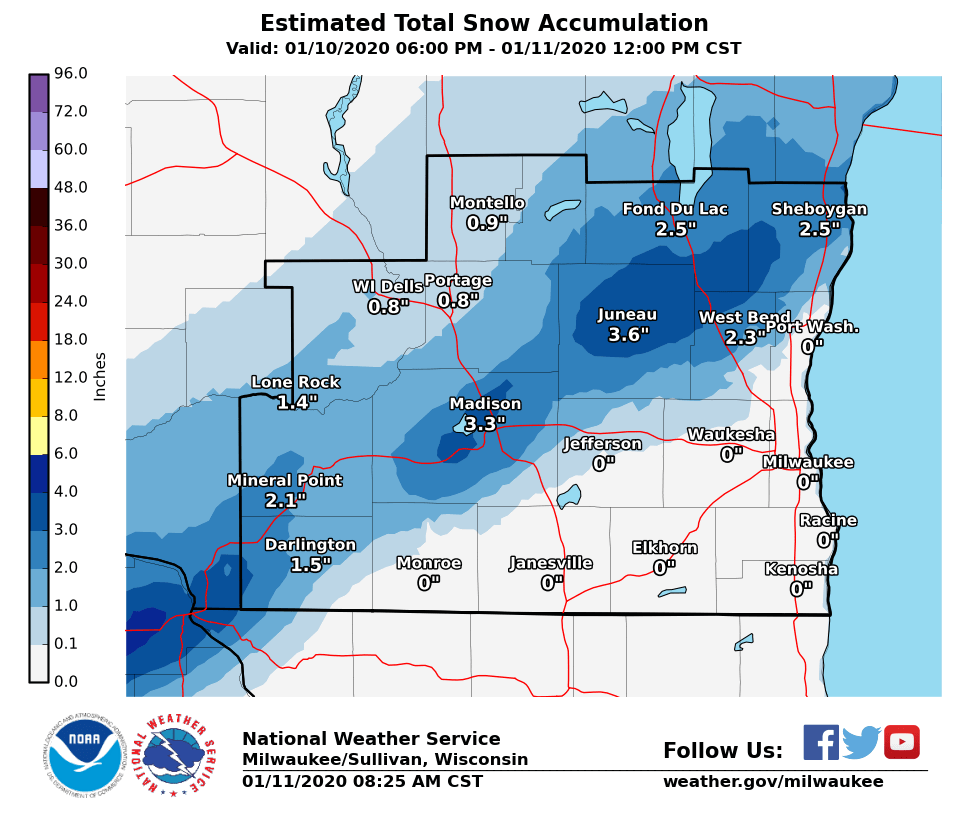 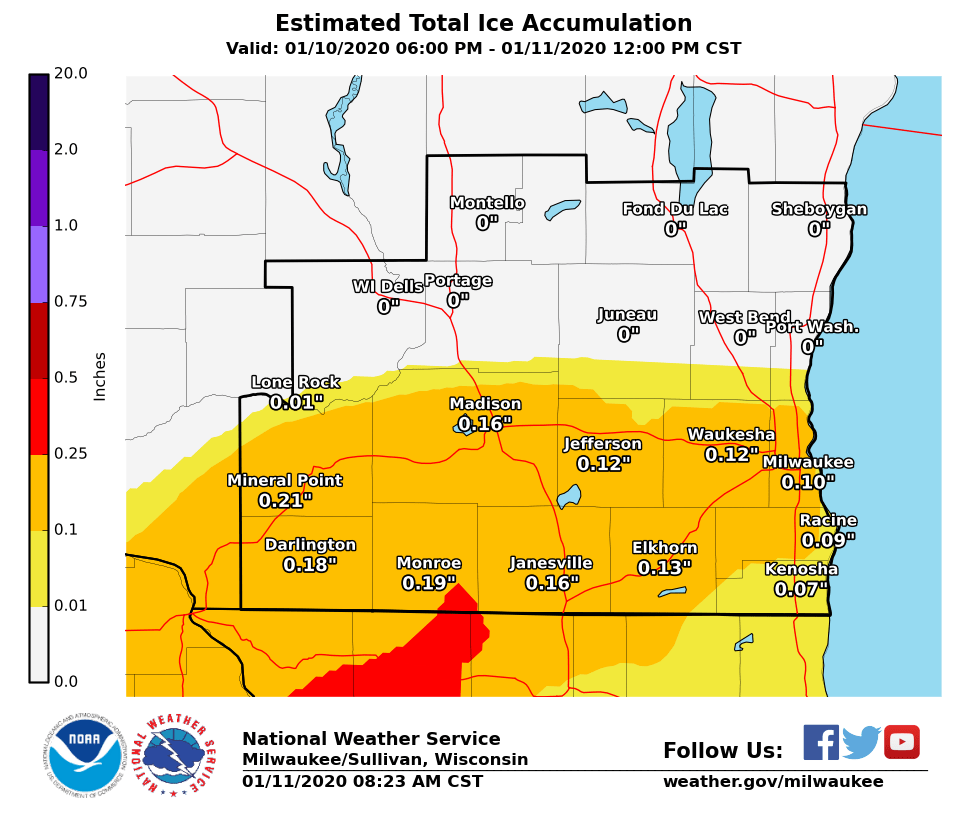 The first wave of a powerful system delivered an icy blow for much of south-central and southeast Wisconsin Friday night into early Saturday, with warmer air making it more north, pushing accumulating snow with it.

The system has tracked a little southeast of what was expected, which means less snow for south-central Wisconsin and the heaviest blow falling on southeast Wisconsin in the second wave Saturday afternoon into the night, according to forecasters.

Menace of powerful 2-wave snowstorm grows for southern and eastern Wisconsin. See how much will fall and when

Tim Halbach, a National Weather Service meteorologist based in Hartland, said the storm has maybe moved a county to the east of what was forecast Friday.

That means Green, Dane, Dodge and Fond du Lac counties now are under just a winter weather advisory until 6 am. Sunday, while a winter storm warning remains in effect for Jefferson, Rock, Walworth, Sheboygan, Ozaukee, Milwaukee, Racine and Kenosha counties until 6 a.m. Sunday.

Counties to the northwest of Dane are free of any advisories, with cities like La Crosse, Eau Claire and Wausau not expected to see any snow accumulation.

Expected snow totals Saturday range from 5 to 8 inches in southeastern Wisconsin to 2 to 5 inches in Madison and Monroe to 0 to 3 inches in Wisconsin Dells and around an inch in Green Bay, whereas possible double-digit totals were forecast for many areas on Friday.

He said the Weather Service still was collecting data but reports from overnight had 1 to 4 inches of snow from southwest through east-central Wisconsin, and 0.1 to 0.2 inches of ice in south-central and southeast Wisconsin.

Dane County was on the border of the precipitation changes overnight, with reports of 3 inches of snow in Shorewood and 2.5 inches at the Dane County Regional Airport, while Oregon and other parts of southern Dane County saw just a dusting of snow on top of the ice.

Strong winds are causing some problems with ice-covered trees, which could cause power outages, he said.

Typically, a glaze of ice of a quarter-inch or more is enough to cause tree limbs to sag substantially, perhaps to the point of breaking and taking power lines with them. And that is without wind.

"We stay ready for this kind of stuff," Johnson said.

The Milwaukee County Sheriff’s Office asked people to stay off highways due to the icy conditions.

Road conditions are available by calling 511, using the 511 app, or going to the state’s 511 website.

The huge system will impact much of the eastern two-thirds of the U.S., delivering a crippling ice storm across parts of the Upper Midwest and Canada, and severe weather to the South, AccuWeather said.

The heaviest buildup of freezing rain is predicted to target parts of Lower Michigan, southern Ontario and Quebec to western Maine Saturday and Saturday night. Through the day on Friday, some cities in Missouri, Kansas and Iowa recorded a quarter inch or more of freezing rain from this storm system.

In Madison on Saturday, there’s an 80% chance for precipitation in the form of snow and freezing drizzle before 11 a.m., then snow, with a possible inch of accumulation, a high near 24 and northeast winds around 20 mph, gusting as high as 35 mph, the Weather Service said.

Overnight, 1 to 2 inches of snow is possible, falling mainly before midnight, as the low falls to around 12, with north winds at 15 to 20 mph and gusting to 30 mph, before decreasing to 10 to 15 mph after midnight.

Sunday’s forecast features increasing clouds, with a high near 25 and north winds at 5 to 10 mph turning out of the southeast in the afternoon.

27 Storm Track meteorologist Guy Brown predicts periods of light freezing drizzle possibly mixed with sleet on Saturday morning, snow redeveloping late in the day and becoming heavy at times before ending overnight, with accumulation of 1 to 3 inches in Dane County and just to the west and northwest, and 4 to 8 inches east and southeast of Dane County.

The bad news is that the Weather Service said several rounds of snow will impact southern Wisconsin in the coming week as an active weather pattern takes over. The first round is expected Sunday night and should drop 1 to 2 inches, with a wintry mix following late Monday night into

Tuesday morning, and another round arriving Wednesday.

Skies over Madison should be partly sunny Monday, mostly cloudy Tuesday and Wednesday, mostly sunny Thursday, and mostly cloudy Friday, with highs near 34, 41, 36, 19 and 27, and lows Sunday night through Thursday night around 22, 27, 21, 10 and 7.

27 Storm Track’s Brown forecasts light snow Sunday night lingering through mid-day Monday, a light rain and snow mix Tuesday, and again Wednesday, and light snow Friday, with highs ranging from 16 to 36 and lows from 4 to 22.

Officially, 0.47 inches of precipitation was recorded at the Dane County Regional Airport on Friday, boosting Madison’s January and 2020 precipitation total (rain plus snow converted to liquid) to 0.48 inches, 0.07 inches above normal. The meteorological winter (December through February) total rose to 2 inches, 0.15 inches below normal.

Despite the slight touch of winter on its last morning, December 2019 was an unusually warm month both locally and hemispherically.

Upper Midwest looks to have snowy winter, but polar vortex may not impact region

The National Oceanic and Atmospheric Administration's Climate Prediction Center and AccuWeather both have released their weather forecasts for the meteorological winter months of December, January and February.