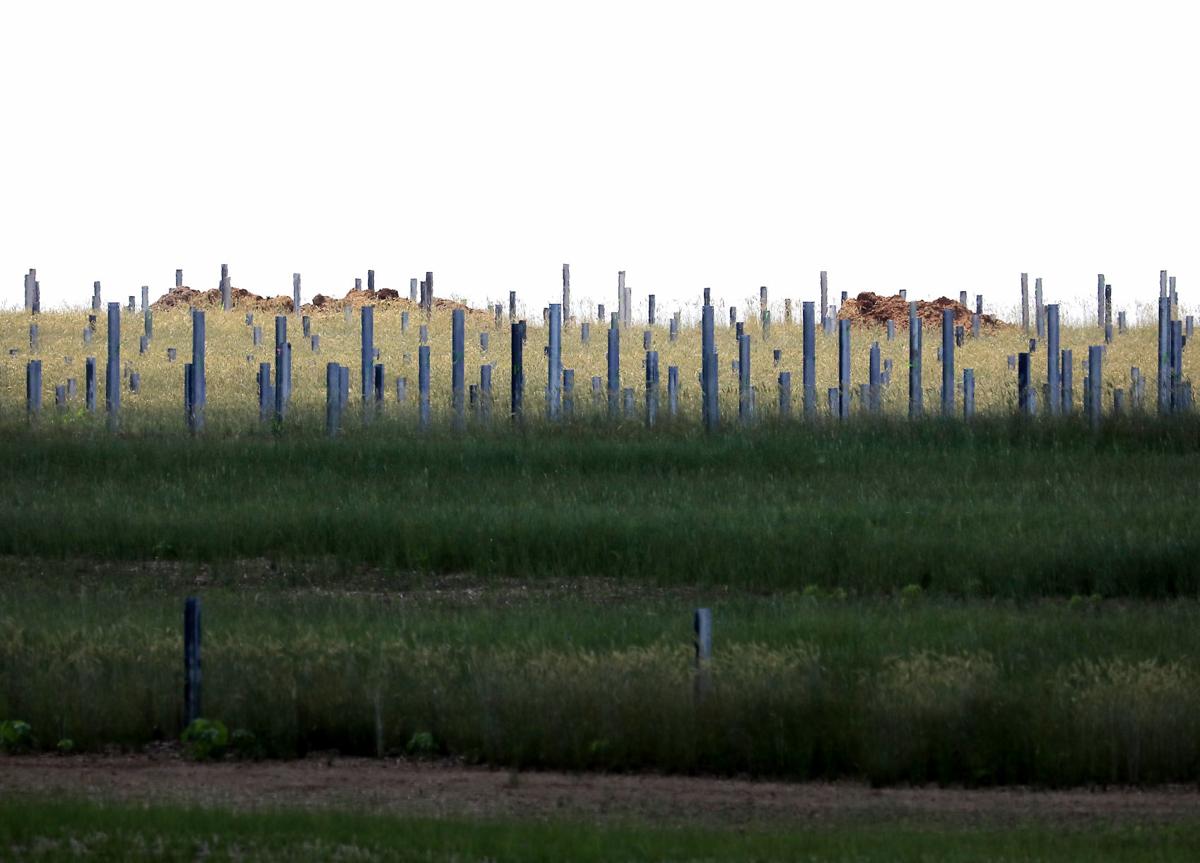 Steel supports await solar panels at the site of the Badger Hollow Solar Farm near Cobb. 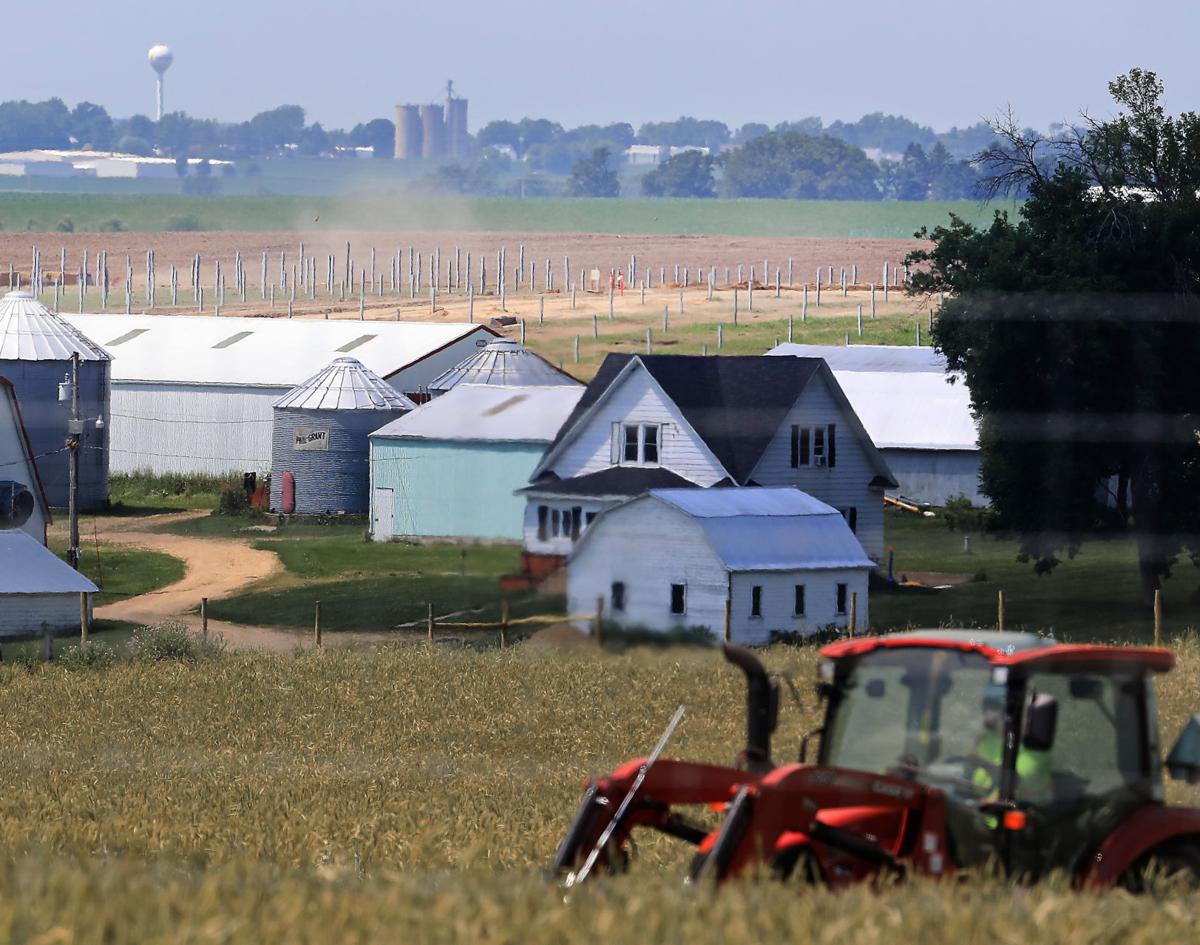 Solar panel supports line a field near Cobb where work is underway on the Badger Hollow Solar Farm. Utilities notified regulators last month that the second half of the 300-megawatt project would be delayed one year because of import tariffs on solar panels. 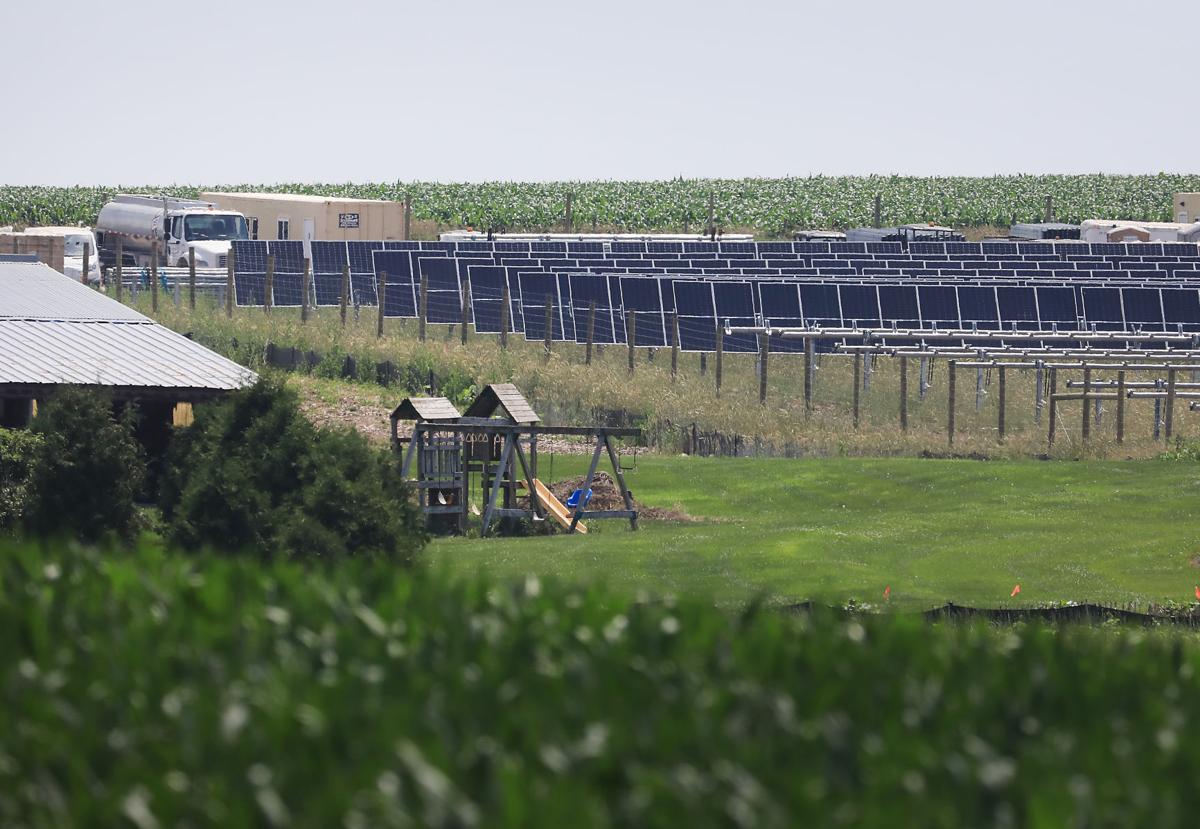 Some solar panels have already been installed as part of the 300-megawatt Badger Hollow Solar Farm near Cobb. Work on the project has been delayed by the COVID-19 pandemic.

Construction of one of Wisconsin’s first large-scale solar farms could be delayed up to a year because of pending tariffs on imported solar panels.

Madison Gas and Electric and We Energies notified state regulators last month of plans to push back the startup date for the 150-megawatt project, known as Badger Hollow II, until December 2022 in order to stay within the approved $195 million budget.

The utilities say the delay is needed to allow the developer, Invenergy, to manage acquisition of hundreds of thousands of solar panels, which could soon be subject to a 20% import tariff if the Trump administration is successful in withdrawing an exemption for “bifacial” panels. Such panels use glass backing to capture additional sunlight reflected off the ground.

Thanks to their higher efficiency, bifacial panels are becoming the standard for utility-scale projects, according to the Solar Energy Industry Association. The group argues the tariffs have unnecessarily driven up ratepayer costs without significantly boosting domestic manufacturing.

Construction is already underway on the first phase of the 300-megawatt Badger Hollow Solar Farm in Iowa County and on a 150-megawatt Two Creeks Solar Farm in Manitowoc County.

Two Creeks is on schedule to be completed in December, while Badger Hollow I is expected to come online in April. Badger Hollow was previously delayed by four months because of the COVID-19 pandemic, which Invenergy said made it difficult to bring about 200 workers to the rural site.

The utilities say the delay will result in unspecified cost increases due to financing and electricity the utilities will have to purchase to replace the anticipated solar output.

However, those costs are expected to be less than the potential increase associated with paying the 20% tariff, which could take effect later this summer and run through next year.

At issue is an on-again, off-again exemption for bifacial panels, which are primarily imported from Southeast Asia.

After the White House first imposed solar panel tariffs in January 2018, an exemption was granted for bifacial panels. The U.S. Trade Representative attempted to revoke the exemption in October, but the U.S. Court of International Trade agreed with Invenergy, which argued the government hadn’t provided enough time for public comment, and left the exemption in place.

The White House restarted the process in January and in April filed a second withdrawal notice, which is now under consideration by the court. The administration argues the exemption will result in substantial increases in imports that would discourage domestic manufacturing.

The solar energy industry group, which contends the exemption has saved the industry “a couple of hundred million dollars” over the past year, has challenged the second withdrawal attempt.

John Smirnow, general counsel and vice president of market strategy for the trade group, said American manufacturers are able to supply less than 10% of the anticipated demand this year, and none are making bifacial panels on a significant scale.

“There’s no U.S. production of bifacial modules for the utility segment,” Smirnow said. “To really get there ... you have to have a long-term vision.”

Smirnow said he doesn’t expect a ruling from the court until at least August.

MGE spokesman Steve Schultz said the one-year extension gives Invenergy “flexibility to manage the construction within their portfolio” of projects.

Schultz said the project should remain on budget even if the tariff is extended beyond the January 2022 expiration.

“We believe extending the project completion date by one year will allow Badger Hollow Solar Farm to manage the acquisition of the needed panels without an increase to the project acquisition cost,” Schultz said.

Invenergy spokeswoman Beth Conley referred questions about the project to MGE and We Energies. Conley did not respond to questions about whether the tariffs have affected other Invenergy projects.

Approved by the Public Service Commission in April 2019, Badger Hollow and Two Creeks would be Wisconsin’s first utility-scale solar farms and represent a five-fold increase in the state’s current solar capacity.

Madison-based Alliant Energy submitted an application in May to purchase six solar farms under development with a combined capacity of 675 megawatts for roughly $900 million. 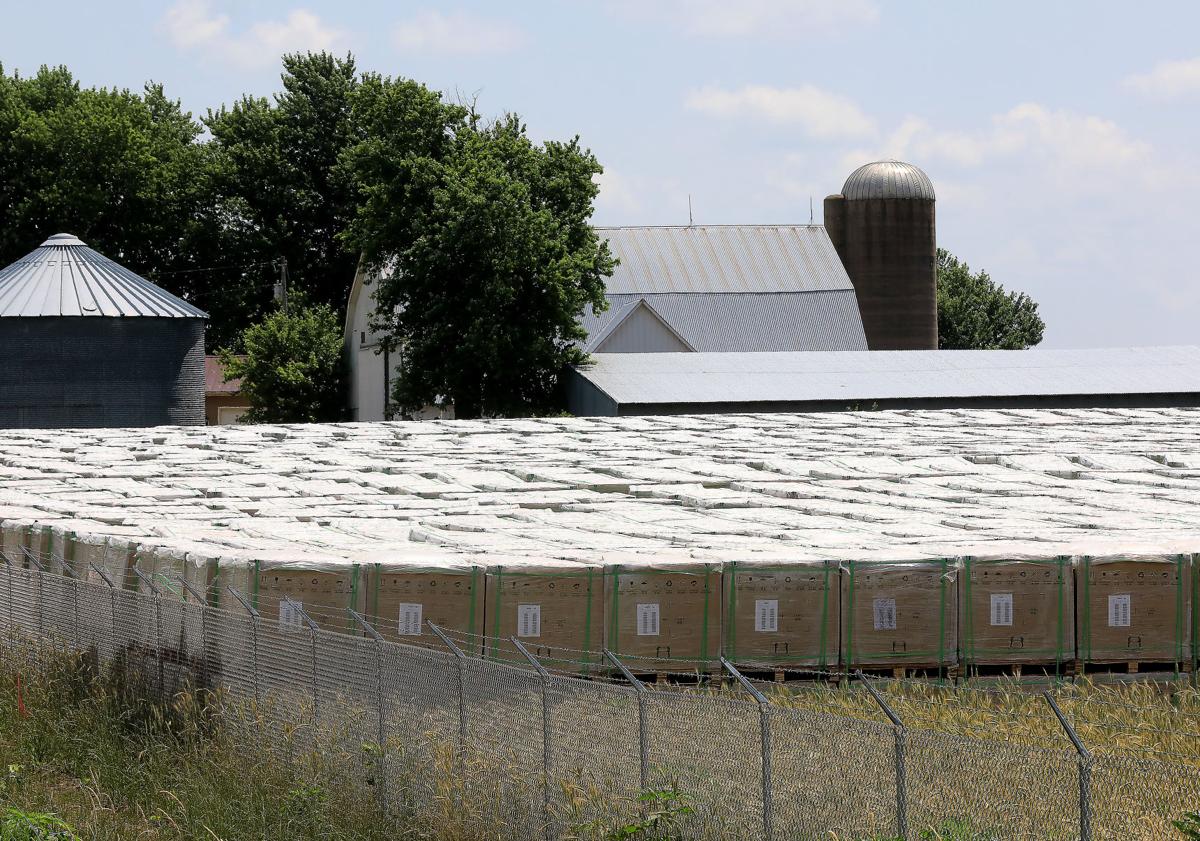 Boxes of solar panels await installation at the Badger Hollow Solar Farm. Completion of half of the project will be delayed by up to a year because of import tariffs that could add 20% to the price of the more than 1 million panels needed.

Steel supports await solar panels at the site of the Badger Hollow Solar Farm near Cobb.

Solar panel supports line a field near Cobb where work is underway on the Badger Hollow Solar Farm. Utilities notified regulators last month that the second half of the 300-megawatt project would be delayed one year because of import tariffs on solar panels. 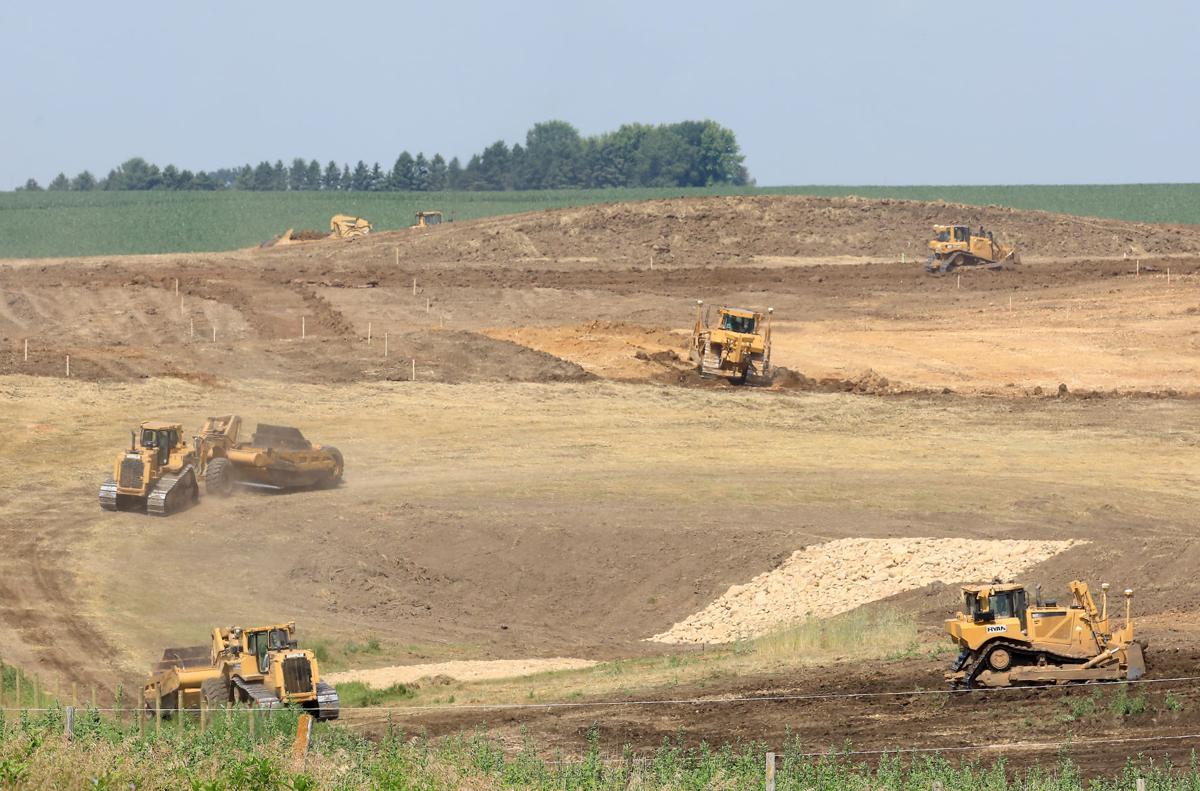 Earth movers prepare ground Monday for the Badger Hollow Solar Farm near Cobb. The 2,200-acre project, jointly owned by Madison Gas and Electric, Wisconsin Public Service Corp. and We Energies, will be one of Wisconsin's first large-scale solar farms.

Some solar panels have already been installed as part of the 300-megawatt Badger Hollow Solar Farm near Cobb. Work on the project has been delayed by the COVID-19 pandemic.