MILWAUKEE — History is no longer in the making.

The Milwaukee Bucks grabbed their first NBA title in 50 years Tuesday in front of a global audience, more than 17,000 inside Fiserv Forum and an overflow crowd of tens of thousands of people at an outdoor watch party in the Deer District.

“Bucks in six,” a chant started after Milwaukee dropped the first two games of the best-of-seven series to the Phoenix Suns, became reality. “History in the making,” a moniker plastered on the face of Fiserv Forum, became past tense as Milwaukee defeated the Phoenix Suns 105-98.

“I don’t think the magnitude has hit anyone quite yet, but it will,” said Drew Griswold, a lifelong Milwaukee resident who paid $1,200 for a standing-room-only spot in Fiserv Forum. “I don’t think I can really comprehend how big of a deal it is for the state for the city, for Giannis, for the Bucks, for everybody.”

It marked the first time since 1971, when Kareem Abdul-Jabbar ruled the court, that an NBA trophy has been hoisted in the city. It also marked one of the few times over the past five decades that the state could collectively bask in a championship by one of its major sports teams.

The Marquette University men’s basketball team won the NCAA title in 1977 and the Green Bay Packers have 13 world titles, but only two of those came after the 1967 Super Bowl victory. The Milwaukee Brewers have yet to win a World Series and the Wisconsin Badgers football and basketball teams continue to chase national championships.

Tuesday night’s feat created a moment that may have put Deer District in prime contention to one day be placed on the state register of historic places. But instead of the German heritage celebrated on nearby Old World Third Street, the major players are of Greek, African, Cuban and Irish descent and with names like Antetokounmpo, Middleton, Lopez and Connaughton.

“This is so great. So great,” said Jim Davis, as he joined the crowd in celebrating in front of the big outdoor screens. “We should have won it last year, but that makes this so much better.”

Deer District has frequently drawn more than 20,000 people to the plazas outside the arena but in anticipation of a much larger crowd, the viewing party area was expanded for Game 6 to accommodate up to 65,000 people. But it wasn’t enough.

Fans were turned away just prior to the game while a steady stream of others exited the District due to overcrowding and long waits for beer and bathrooms.

Zach Solomon, 18, and his brother, Evan, of Milwaukee attempted to get in but the crush of people outside Turner Hall was too much as police turned newcomers away. The Solomons opted to peer over the chain-link fence, but a few were successful at scaling the fence before police halted the practice.

“It’s a bad angle, but it’s better than nothing,” Zach said of their vantage point.

Deer District featured four large screens in three different areas outside the arena, several streets were closed and scores of police, some on horse and bike, patrolled the area. One of the overflow areas with a screen was on the site of the since removed Bradley Center. The gravel lot was packed with jubilant fans, who stood shoulder-to-shoulder in the shadow of the Milwaukee Arena, where the Bucks played until the Bradley Center opened in 1988.

Cisco Claudio, 50, and his son, Noel Patelski, 28, of Milwaukee had been in the massive crowd but didn’t want to wait 40 minutes to use the bathroom They exited and were perched on the fifth level of an adjacent parking garage along with more than 40 other fans.

They had a birds-eye view of some of the crowd, a sweeping view of the city and could even make out game action on the jumbo screen.

“This is history. I can’t believe I’m seeing this,” Claudio said. “This is amazing.”

Tuesday night’s scene stood in contrast to last fall, when Milwaukee hosted the Democratic National Convention amid the peak of the pandemic. Few traveled to the city for the virtual convention and hotel rooms, bars and restaurants were largely empty.

But the NBA Finals brought more international attention to Wisconsin’s largest city, thanks to a fan base that swelled to Packers-like proportions, a team that refused to buckle and the play of its Greek superstar, Giannis Antetokounmpo, who was drafted by the Bucks in 2013. In his first season, the Bucks won just 15 games, but he led the team to the playoffs in six of the next seven seasons.

And it has all come just three years shy of the opening of the $524 million Fiserv Forum, which is helping to transform Milwaukee’s downtown.

Nate Lauber, 48, came from Fond du Lac, arrived 10 hours before the tip and a wore a foam deer head as a hat.

“If you’re going to come down you might as well soak it all in,” Lauber said. “People overuse the word electric but when you’re down here for the big games it is electric. It’s great for Wisconsin it’s great for basketball. It’s great for all the fans who love the Milwaukee Bucks.”

A hotel will be built in the District, there is talk of more development on the former Bradley Center site while the plaza has turned into a community gathering place for art festivals, night markets and music.

Bars and restaurants in and around the District filled hours before the tip-off and fans roamed the downtown in anticipation of a game 50 years in the making. Tickets on reselling websites ranged from over $1,000 each for standing-room-only views and to more than $17,000 for a ticket courtside. Two fans won tickets to the game in a lottery after being vaccinated at an on-site clinic hosted by the Bucks and the city of Milwaukee Health Department.

Instead of playing its scheduled night game, the Brewers moved their game Tuesday against the Kansas City Royals to 3:10 p.m.

“It’s the Bucks’ night,” Rick Schlesinger, the Brewers president of business operations, told MLB.com. “We want them to win it, and we want it to be special.”

Not since the 1957 Milwaukee Braves and the 1982 Brewers have crowds amassed to the size of Tuesday night’s in the city’s downtown. While not Wisconsin Avenue, Deer District was a sea of fans chanting en masse and loudly cheering after each Bucks bucket.

Cheers erupted across the state, with Gov. Tony Evers tweeting “Ho-ly mackerel. Our Milwaukee @Bucks have done it in six! Wisconsin could not be prouder of these players or this team.”

In Madison, in the final minutes of the game, sporadic cheers cut through the muggy night on Madison’s State Street as full houses in popular establishments pushed fans out onto patios.

The crescendo grew louder as the win was sealed, and a steady stream of revelers left wherever they watched the game on their path to celebrate elsewhere.

Danny Glickman, 22, a recent UW-Madison graduate, took in the final seconds watching the game with friends through the windows of an at-capacity State Street Brats.

“We’ve been waiting for this for years, and all I want to do is walk in this bar and celebrate with all these people,” he said. “With that being said, I’m sure in a half hour all these places will be filled.”

Hector Martinez snagged a spot earlier in the night at State Street Brats to see the historic win.

“It’s been so many years,” the 36-year-old said. “We’re so happy man, Wisconsin is so happy. Can you imagine Milwaukee right now?”

'This is history': See all the memorable photos as fans erupt outside Fiserv Forum after Bucks win title

Jim Polzin: Thank you, Giannis — a humble superstar and a deserving champion

As the state of Wisconsin celebrates the Milwaukee Bucks’ NBA title, it’s impossible not to be in awe of the Greek Freak.

Watch now: The energy of the Deer District

Photos: Were you there, too? Bucks fans pack Deer District for epic Game 4 of NBA Finals

An electric crowd of Bucks fanatics, sprinkled with a smattering of Suns fans, gather in the Deer District to watch the Milwaukee Bucks take o… 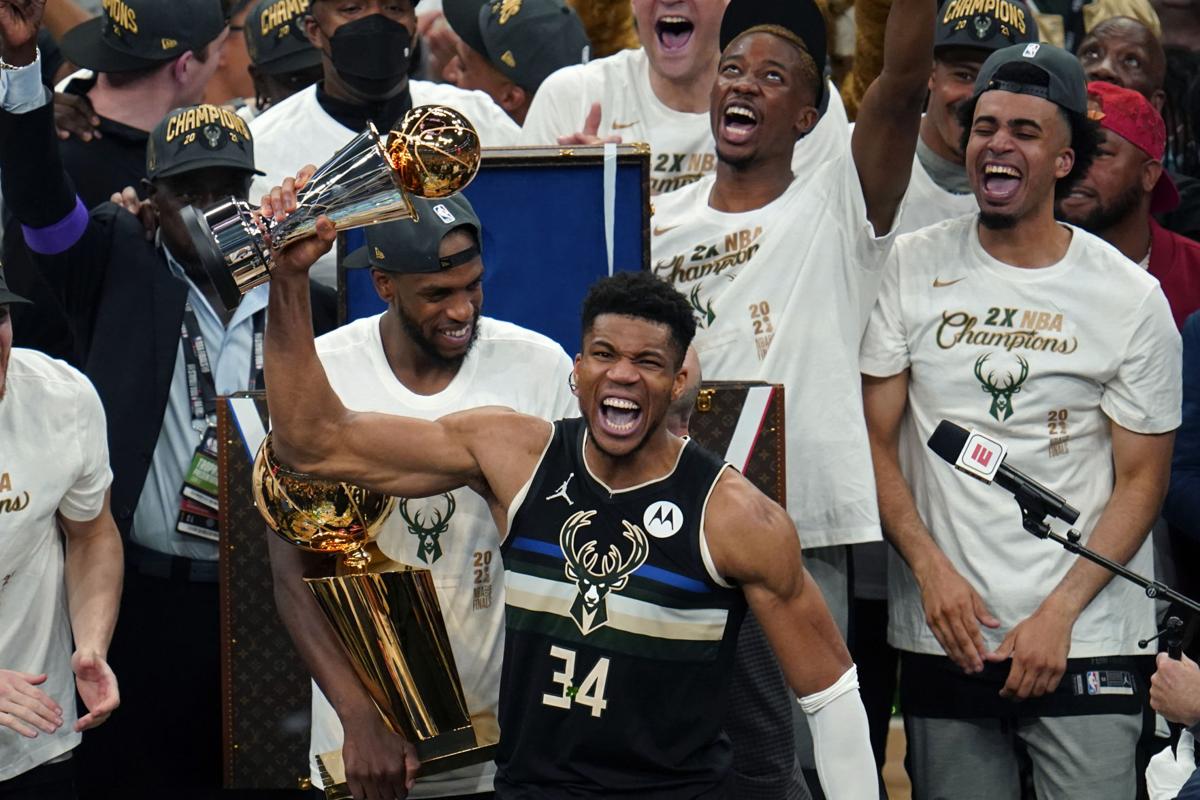 Milwaukee Bucks forward Giannis Antetokounmpo celebrates with the MVP trophy Tuesday night after scoring 50 points and leading the Bucks past the Phoenix Suns, 105-98, in Game 6 of the NBA Finals. 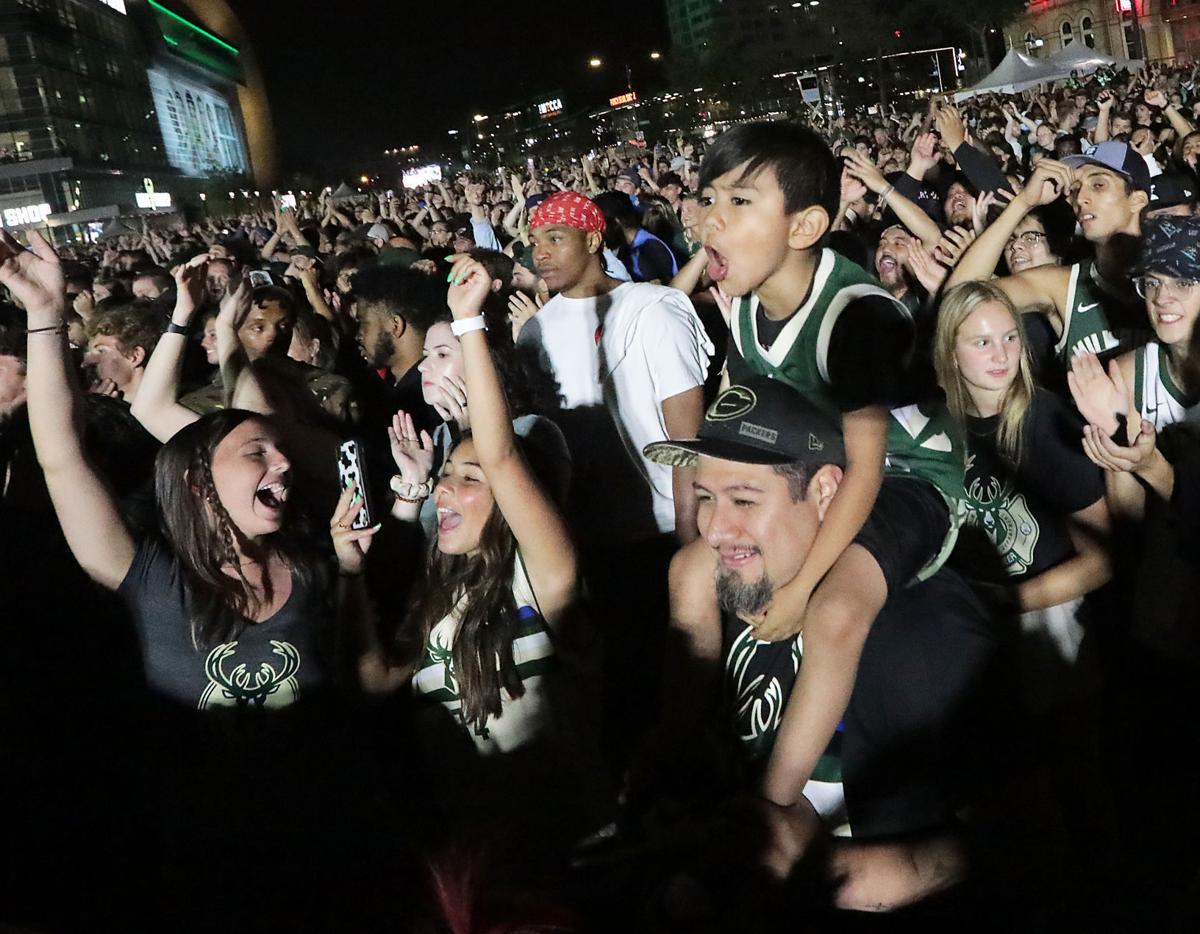 Milwaukee Bucks fans celebrate during the fourth quarter Tuesday night in the Deer District outside Fiserv Forum in Milwaukee. 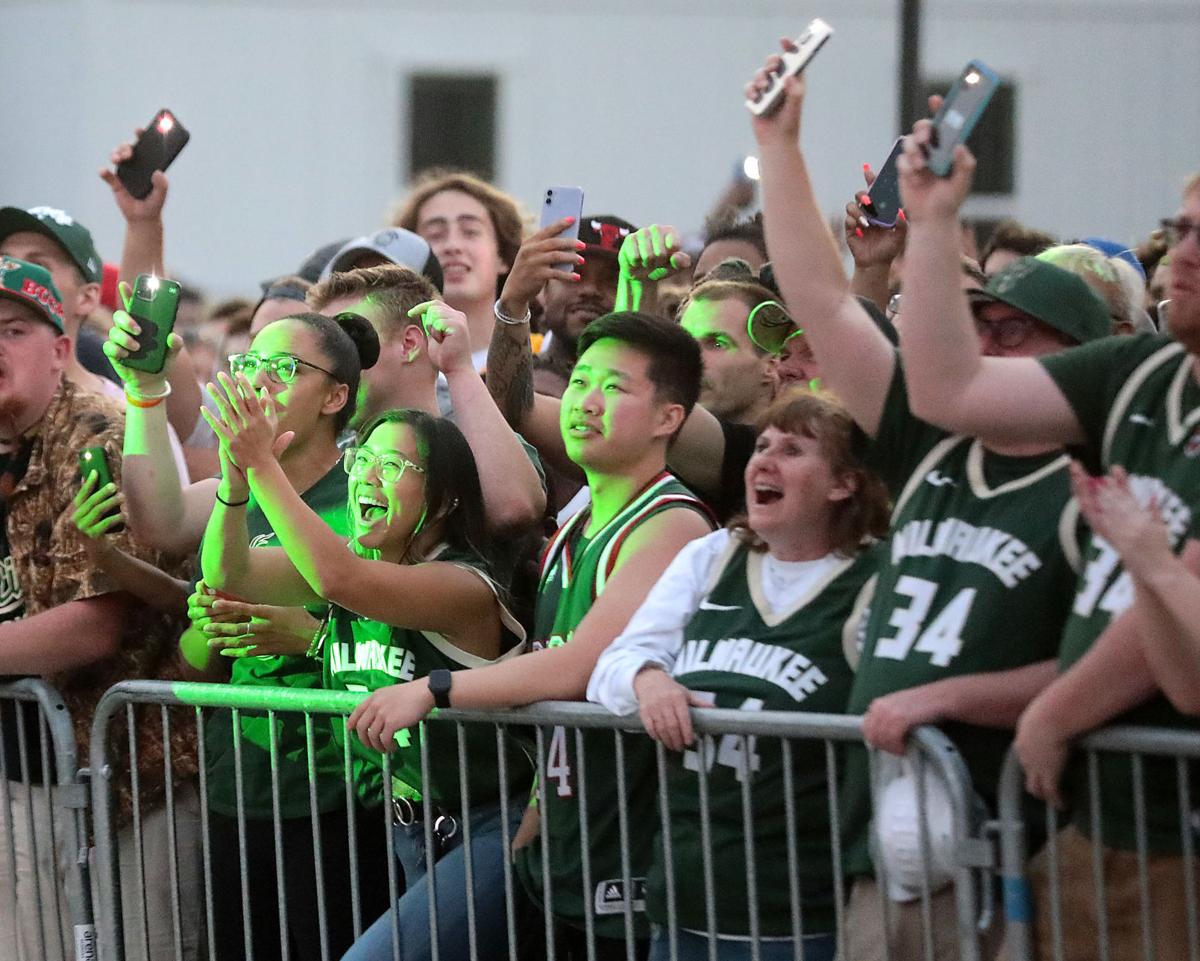 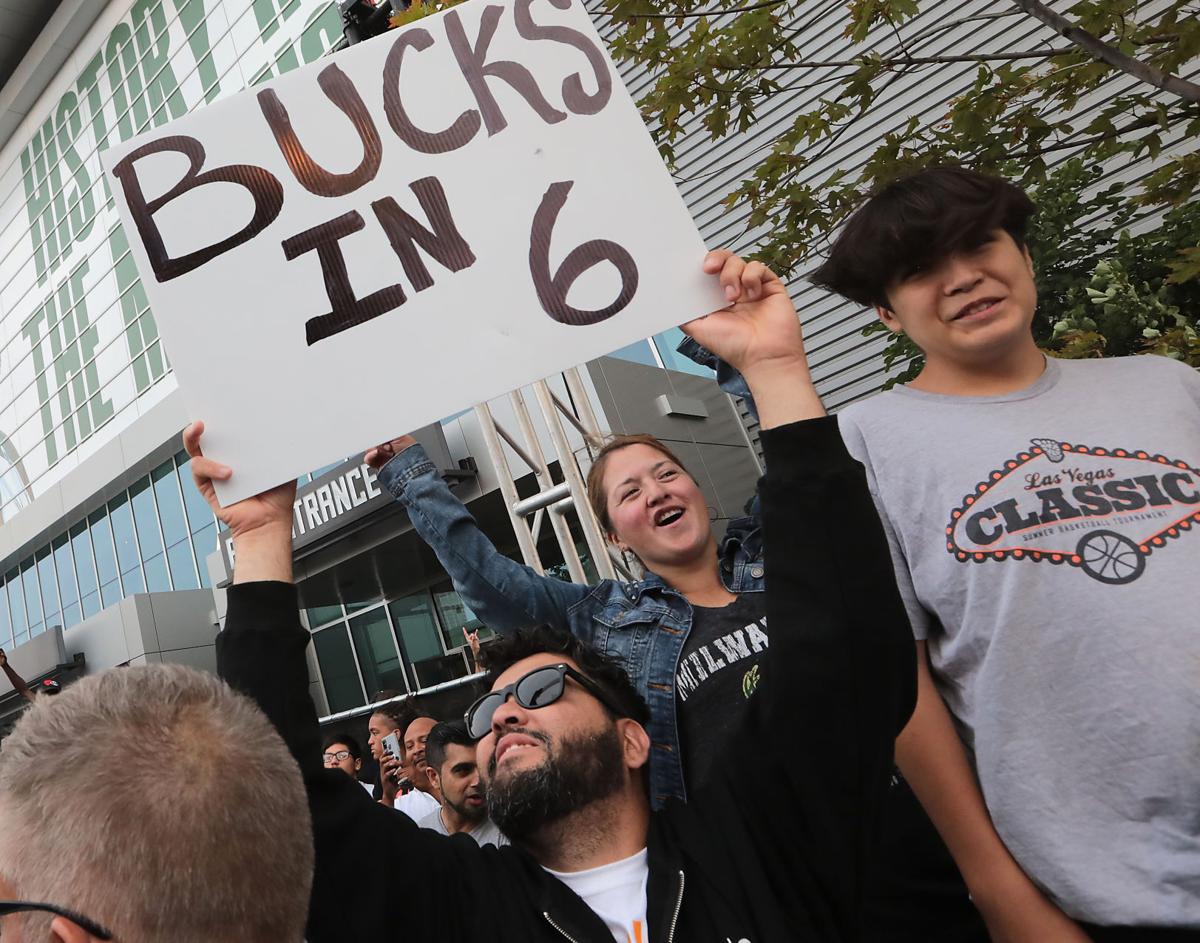 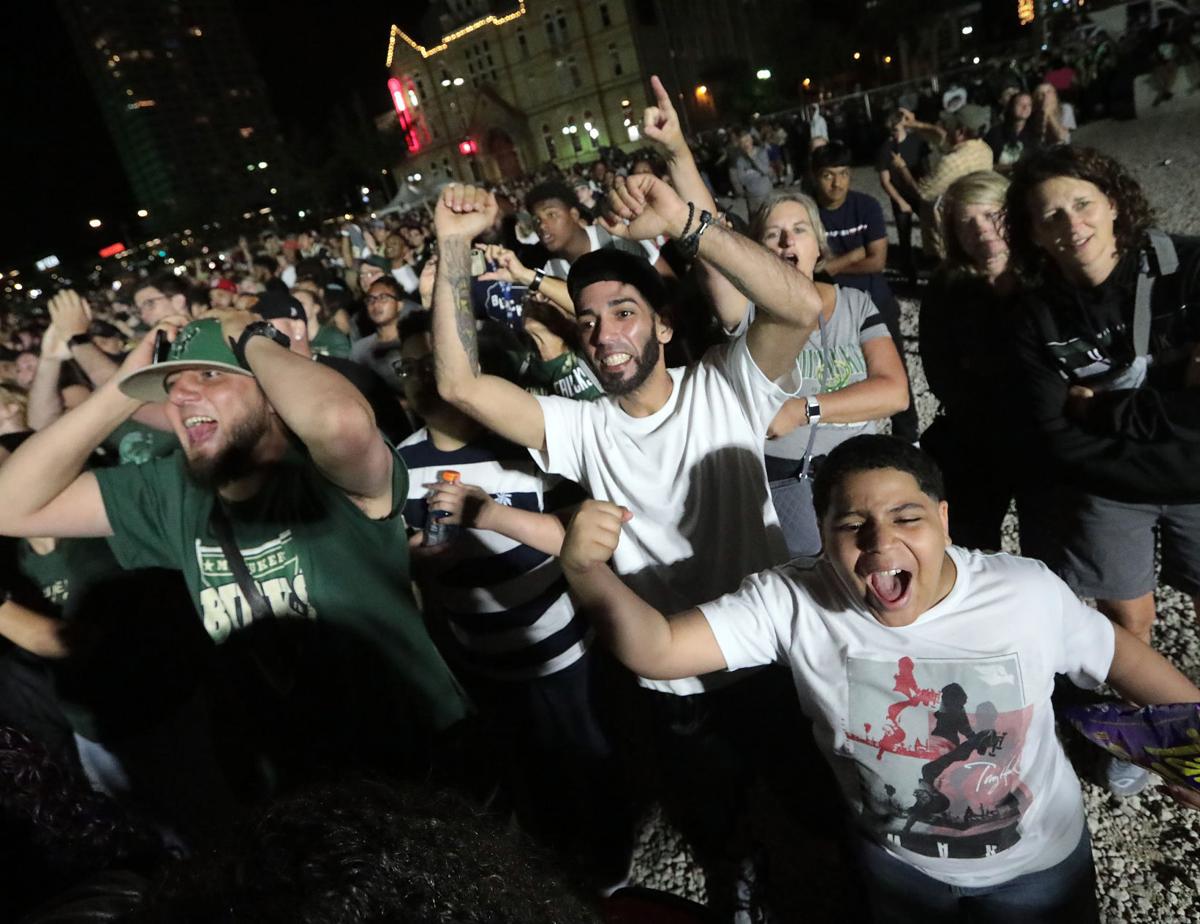 Fans of the Milwaukee Bucks celebrate during the fourth quarter as the team earned a 105-98 win over the Phoenix Suns to win their first NBA championship since 1971.