Wisconsin school districts are set to receive about $2.2 billion from the last three federal stimulus bills, a windfall that could make budgeting in the wake of the COVID-19 pandemic considerably easier.

A memo from the nonpartisan Legislative Fiscal Bureau shows the three major federal aid packages passed since March 2020 will give billions of dollars to school districts, with the funds distributed unevenly, largely based on the number of low-income students enrolled in each district.

Beyond the $2.2 billion, Republican lawmakers have already passed a plan that would send an additional $66 million to schools based on the hours of in-person instruction they provided, and another $154 million the state’s Republican-controlled budget committee hasn’t come up with a plan for yet. Once all federal aid is distributed to school districts after state lawmakers determine a plan, total federal aid from federal stimulus will amount to about $2.4 billion.

The most recent federal aid package, the American Rescue Plan, will send about $1.5 billion to Wisconsin school districts, about $1.4 billion of which will be sent to them directly. 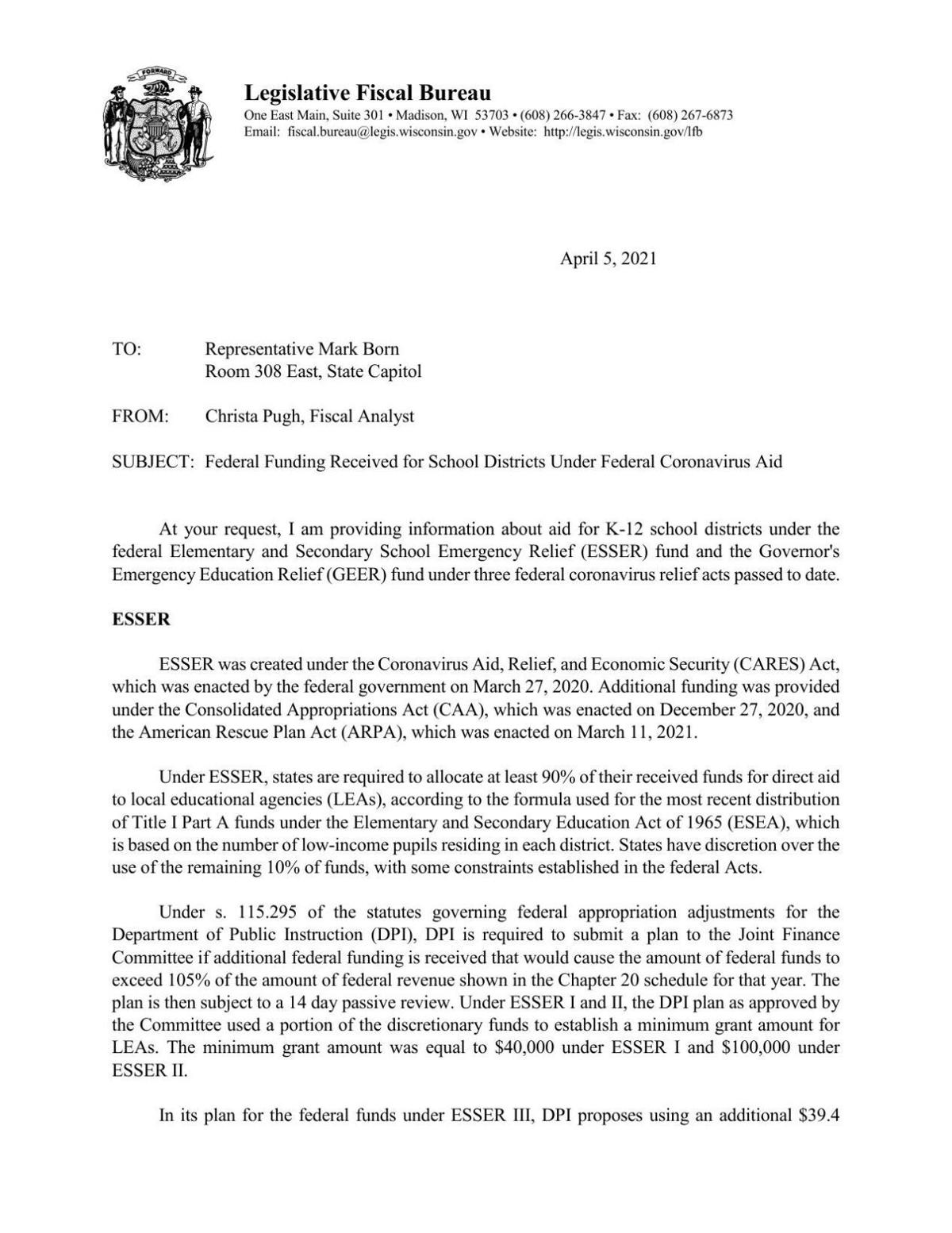 Federal guidelines mean some school districts will receive far more than others. For instance, Milwaukee Public Schools is set to receive $798 million, or $11,242 per student; while the McFarland School District is only guaranteed $654,913, which amounts to $107 per pupil.

WEDC report details goals for state's COVID-19 recovery, which could be boosted with federal stimulus funds

The Madison School District, which enrolls more than 26,000 students, is guaranteed to receive a total of about $71 million, which amounts to $2,720 per student, according to the Legislative Fiscal Bureau memo.

Some school districts could receive slightly more money under a plan submitted by the Department of Public Instruction that will need to be reviewed by the Legislature’s budget committee. Under the proposed plan, neither Milwaukee nor Madison would get any more money, while McFarland would receive an additional $179,798.

Madison School District spokesperson Tim LeMonds said the district is grateful for the additional funding, but cautioned the funding is one-time only, meaning it can’t be used to sustain an increase in permanent staffing or related expenses tied to recurring costs of school districts and inflation. Such recurring investments will need to be sustained at the state level through revenue limits and general aid, he said.

The district’s estimate for federal support through the three stimulus packages is $62 million through 2024, though the district is awaiting more details from the state.

The Madison School Board has already approved spending about $5 million received under the first COVID bill passed in March 2020 by the end of the school year on instruction, such as online learning programs; student services related to mental health; English learner and translation needs and support for special education; and operations, such as Wi-Fi, laptops, nurses, contact tracing, custodial staffing, cleaning supplies and COVID-19 signage.

The school district expects to receive about $18.9 million under the second round of funding provided by the federal government. The school district is in the process of planning how it will use those funds, but a significant portion of the money is expected to go toward safety and operational needs in light of COVID-19 safety requirements, as well as academic acceleration and programs to support student mental and social emotional needs as they return to school.

The School Board and public can review the plans in May and June with the board finalizing a preliminary budget at that time.

The school district expects to start planning for the latest round of funding over the summer.

A spokesperson for Milwaukee Public Schools did not respond to a request seeking comment on how the school district plans to spend its money.

Republicans on the Legislature’s budget committee criticized how the federal government has allocated the funds during a state budget hearing Tuesday.

“Do you think the federal government’s formula is fair?” asked Sen. Dale Kooyenga, R-Brookfield. He and other Republicans questioned why districts like Milwaukee that were closed during the pandemic received far more money than other districts that have been open.

State Superintendent Carolyn Stanford Taylor said disbursing the money through the Title I formula, providing financial assistance to schools with high numbers or percentages of children from low-income families, was probably the most fair.

“We have continuing needs in our districts that go well beyond the pandemic,” Stanford Taylor said.

Republicans who questioned why schools that were closed during the pandemic were getting more money than others that were open asked whether the state could use some of its discretionary federal money to address the gap. Stanford Taylor said that federal law does not require the state to distribute the roughly 10% of discretionary money based on whether districts were open.

The state superintendent does not have the power to order schools to reopen to in-person learning. Stanford Taylor, under repeated questions from Republicans about schools opening, stressed it was a local decision based on what schools are prepared to handle students returning. However, in every district students are either back in person or there is a plan for them to return, she said.

Boxing, mixed martial arts programs to reopen after more than a year hiatus caused by COVID-19

“I do believe that the majority of our students fare better in person,” Stanford Taylor said.

'Every aspect of our lives has been turned on its head': The COVID-19 pandemic one year on

A year into a once-in-a-century pandemic, Madison and Wisconsin continue to grapple with a virus that's killed thousands, destroyed businesses, upended school and changed nearly all aspects of everyday life.

“Truly every aspect of our lives has been turned on its head,” said Malia Jones, a UW-Madison infectious disease epidemiologist.

"If you would have told me last March that we'd be virtual for a year, I'd never, ever would have believed it."

"We’re used to taking whatever comes through the door," said nurse Maria Hanson, who started journaling about the pandemic soon after treating the patient.

Madison firefighter and paramedic knew his job came with risk. Then COVID-19 hit.

"It’s a risk vs. reward thing and I risk my life to save others," said Brandon Jones, who always worried about bringing the virus home to his wife and two kids.

“Usually a funeral is a major step in understanding that a life was lived and the person is now gone,” he said. “If families don’t get that, it’s just really hard.”

Rev. Marcus Allen knew what bringing everyone together could do for their spiritual and mental health. But each time he considered reopening the church, COVID-19 cases surged.

“Reporting the death counts out day after day was draining,” she said. “It felt like I was announcing a funeral every day.”

How the COVID-19 pandemic unfolded in Madison and Wisconsin

A year into a once-in-a-century pandemic, Madison and Wisconsin continue to grapple with a virus that's killed thousands, destroyed businesses…

Picturing a pandemic: See the last year through the eyes of the Wisconsin State Journal's photographers

COVID-19 changed nearly everything about our world, even how we see it. Here are some of the State Journal's top images of the pandemic.

These are the weirdest things we've left on the Moon

The funds were diverted back in 2019 to help pay for border barriers as part of Trump’s national emergency declaration.