WEST ALLIS — The swine, goat and cow barns are empty, the SkyGlider idle and the hucksters touting newfangled mops, cleaning agents, knives and cookware are nowhere to be found in the shuttered Wisconsin Exposition Center.

The Kids from Wisconsin aren’t singing and dancing their way across a stage, the Milwaukee Bucks don’t have a milk stand and the racing pigs are absent.

Thankfully, there are a few familiar smells sans manure that are bringing State Fair Park partially back to life and helping restore a slice of normalcy to an abnormal summer.

With the Wisconsin State Fair and most other county fairs around the state canceled, the Fair Food Drive-Thru is providing a calorie-packed and artery-clogging alternative to add to our COVID-19 waistlines over the course of four straight, four-day weekends in what could be the state’s largest drive-thru.

Instead of wandering on foot throughout the sprawling fairgrounds, customers on Thursday, the start of the second weekend of sales, stayed in their vehicles and followed a circuitous route. It allowed motorists to pull off into one of 12 vendors much like a race car making a pit stop. Only these slow-moving detours have nothing to do with tire changes. Instead, the offerings include deep fried cheese curds, funnel cakes sprinkled with powdered sugar and waffles stuffed with chicken and skewered onto a stick. There’s pizza, bloomin’ onions, hand-rolled pretzels, Polish sausages and fresh-squeezed lemonade.

Ari Viscarra, 23, and Sean Kim, 27, both of Madison, were in the third car in line. They waited on the Milwaukee Mile oval in Viscarra’s 2007 Volkswagen convertible Beetle and arrived nearly 90 minutes before the 4 p.m. opening. By 3:45 p.m., there were over 120 vehicles in their rear view mirror. Cookie dough, cheese curd tacos and corn dogs were among the foods they were eyeing up.

“A lot of people have cravings for a lot of the food and a lot of the things they like to come here and enjoy,” Kim said. “It gets people out of the house and they can come and enjoy those things where (otherwise) they would have been locked down and kind of missing out. So, they get a little bit of that feel. And, it’s better than nothing.”

The second weekend began Thursday and wraps up today but two more weekends are set for this Thursday through Aug. 9 and Aug. 13-16. Those last two weekends will include 13 stops including the opening of the Original Cream Puff Pavilion, which will likely swell traffic to the park but to levels nowhere near a typical day at the State Fair.

In 2019, over 1.1 million people visited the fair during its 11-day run, single-day attendance records were broke on five of those days, and the fair had an average daily attendance of 102,779 people, according to State Fair data.

Established in 1851 and first held in Janesville, the fair has been a permanent fixture in West Allis since 1892 and, during a regular year, has a $200 million economic impact on the area.

Last year’s event included nearly 3,700 exhibitors with nearly 20,000 entries in livestock, horticulture, textiles, crafts, culinary, cheese, meat and many other categories. More than 10,000 animals that came from around the state were judged along with a record-breaking number of vegetables and herbs.

But the pandemic has put a halt to record crowds and exhibits. Vendors for the drive-thru event were selected from those who would have otherwise been at the fair and who responded to an e-mail asking if they would take part in the scaled-down event.

“We’ve never done something like this so they kind of had to take a chance on us,” said Tess Kerksen, public relations manager for Wisconsin State Fair Park. “This is a way to absolutely sweeten the sting of the cancellation. Our expectations were a little bit all over. We didn’t know if we would have so many cars that we’d be overwhelmed but we really have found the perfect mix of cars for our vendors.”

At Funnel Cakes by G&G along Second Street, the toppings include not only powdered sugar but apple, strawberry and chocolate. The menu at Gertrude’s Fresh Pretzels along Third Street includes a 10-inch pretzel wrapped around a Johnsonville brat while Kora’s Cookie Dough is offering up cookie dough on a stick and another version that is deep-fried. At “The Big Cheese” stand, located at the corner of Main Street and Badger Avenue, there are $18 buckets of deep-fried cheese curds made from cheese from Ellsworth Cooperative Creamery, 64-ounce jugs of lemonade for $14 a pop and $12 bloomin’ onions.

“It seems like they’re missing it,” stand manager Greg Wunderlich said of his customers. “The response has been awesome.”

The Wisconsin Cattlemen’s Association typically has two stands at the fair, one inside the Wisconsin Products Pavilion and another just outside the pavilion facing the Case IH Coliseum. On a typical fair day the stands sell more than 1,000 ribeye sandwiches over the course of a more than 13-hour day. On Thursday, the association’s first day at the drive-thru, 560 ribeye sandwiches were sold at $10 each in just four hours at the stand set up in the infield of the Milwaukee Mile.

Vicki and Craig Dunnam manage the trailer and have a beef ranch near Westby. Vickie said she had originally ordered 1,000 ribeye for each of the association’s two weekends at the Drive-Thru but doubled her order after hearing about the success from the Wisconsin Pork Producers Association during the opening weekend. On Thursday, the very first customer ordered 22 ribeye sandwiches.

“It’s really quite crazy,” Vicki Dunnam said. “The spirit is still the same. We can feel just the happiness of being here. The park is still here, it’s just that it’s a little different.”

The trailer helps fund marketing, education and advocacy efforts for the association but the Drive-Thru has been its only gig this year. The WPS Farm Show in Oshkosh, Midwest Horse Fair and World Dairy Expo, both in Madison, have all been scuttled. The World Beef Expo next month at State Fair Park remains an in-person event for now but its unclear if food vendors will be a part of the event, said Charlene Becker, the Beef Expo’s executive director.

The Cattlemen’s Association has been a staple at the State Fair for the past 25 years, and even though the fair is not same, grilled beef from a pair of massive propane grills is triggering the senses. The menu also includes hamburgers, cheeseburgers and all-beef quarter-pound hot dogs. Roast beef is not being offered.

“Due to COVID we have a limited menu this year,” Craig Dunnam said during a tour of the trailer. “We’re doing the best we can to cope with the changes.”

Ribeyes on the Grill

Waiting on the Track

Curds in the Convertible

Barry Adams covers regional news for the Wisconsin State Journal. Send him ideas for On Wisconsin at 608-252-6148 or by email at badams@madison.com.

Note: Those attending are required to remain in their vehicles while in State Fair Park. No pedestrian or bike traffic is allowed.

After 69 years as one of the leading attractions in the Wisconsin Dells area, the Tommy Bartlett Show announced Wednesday that it would close permanently after losing the 2020 season to the COVID-19 pandemic.

Chancellor Rebecca Blank defended reopening the university this fall, even as criticism mounted and the number of reported COVID-19 cases on campus exceeded 2,000 infections.

Johnson tested negative for COVID-19 late Wednesday, but will still quarantine until Sept. 29. 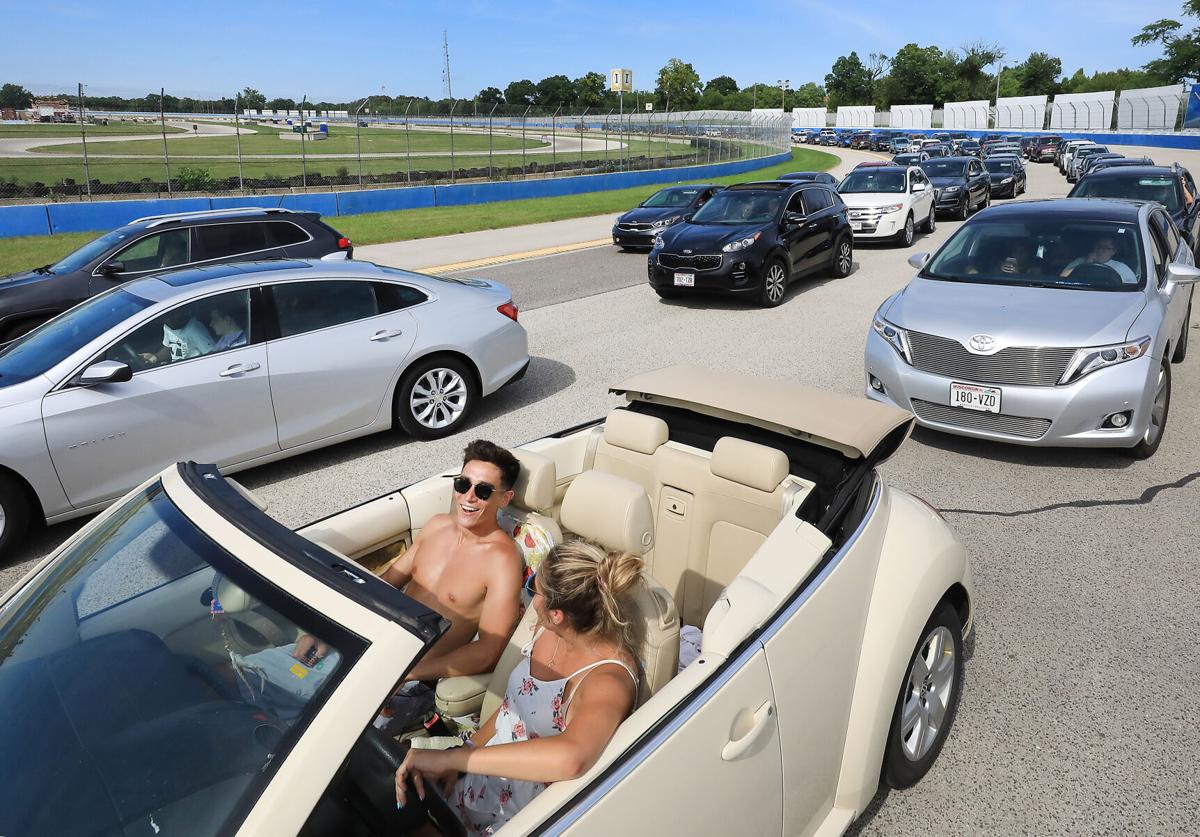 Ari Viscarra and Sean Kim, both of Madison, wait with more than 120 other vehicles on Thursday on the oval of the famed Milwaukee Mile at State Fair Park for the opening of the Fair Food Drive-Thru. The event, scheduled over four, 4-day weekends in July and August, offers up a wide array of fair food with motorists driving to vendors set up in the West Allis fairgrounds. The State Fair had been scheduled to run from Aug. 6-16 but was canceled due to COVID-19. 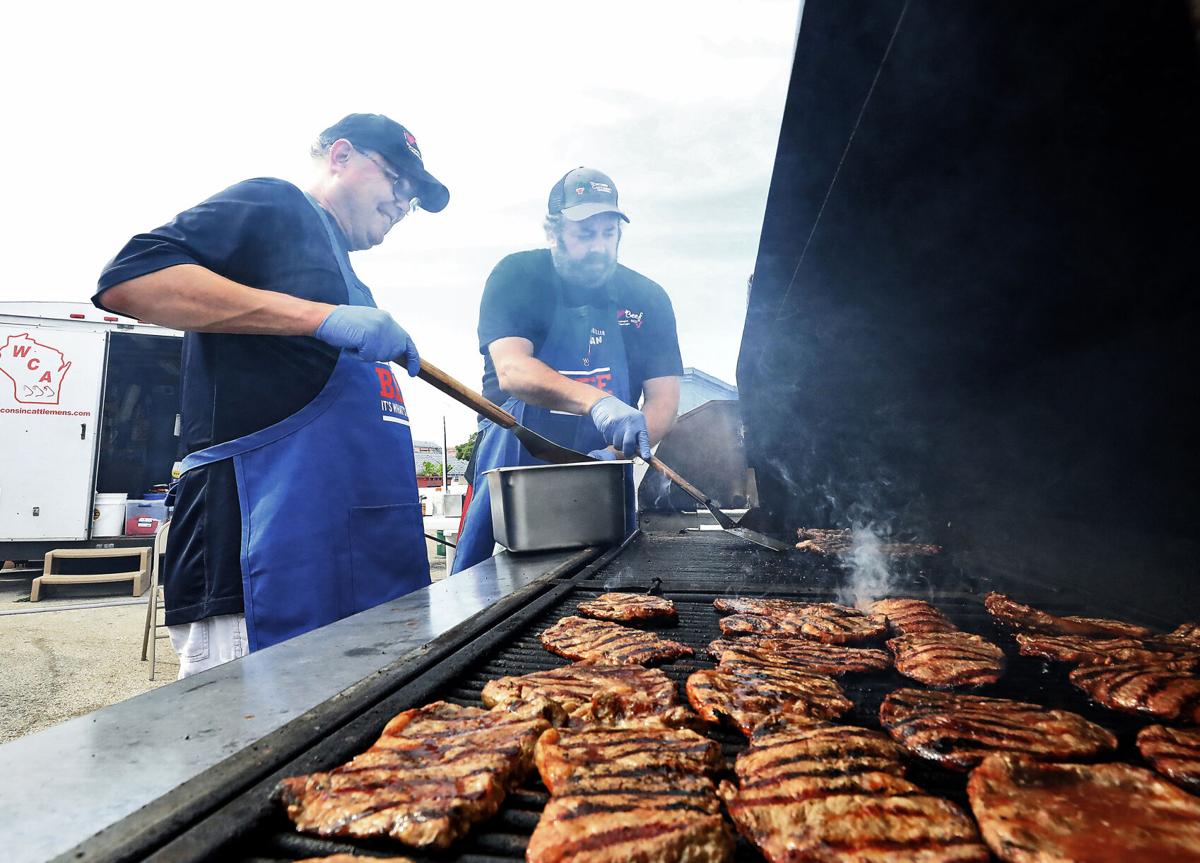 The Wisconsin Cattlemen's Association has been a State Fair staple for more than 25 years. Its grilled ribeye sandwich is the organization's most popular food item. Last year it sold a record 14,000 sandwiches over the 11-day event. This year, it expects to sell more than 4,000 sandwiches over two weekends at the Fair Food Drive-Thru. 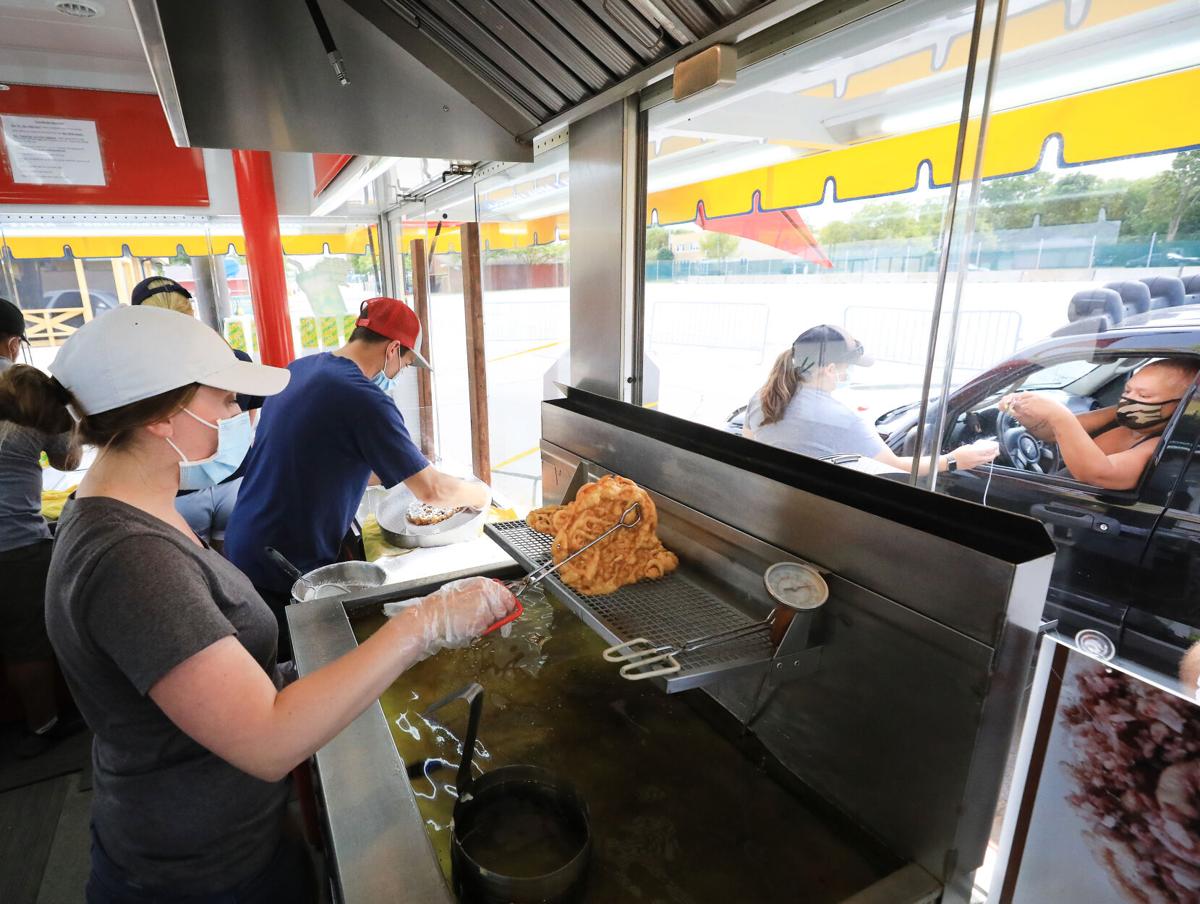 Workers at Funnel Cakes by G&G work in a portable food cart as a motorist pays for an order Thursday during the Fair Food Drive-Thru at Wisconsin State Fair Park in West Allis. This weekend featured 12 stops, but the next two four-day weekends will have 13 vendors, including the Original Cream Puff Pavilion that is expected to draw thousands of people. 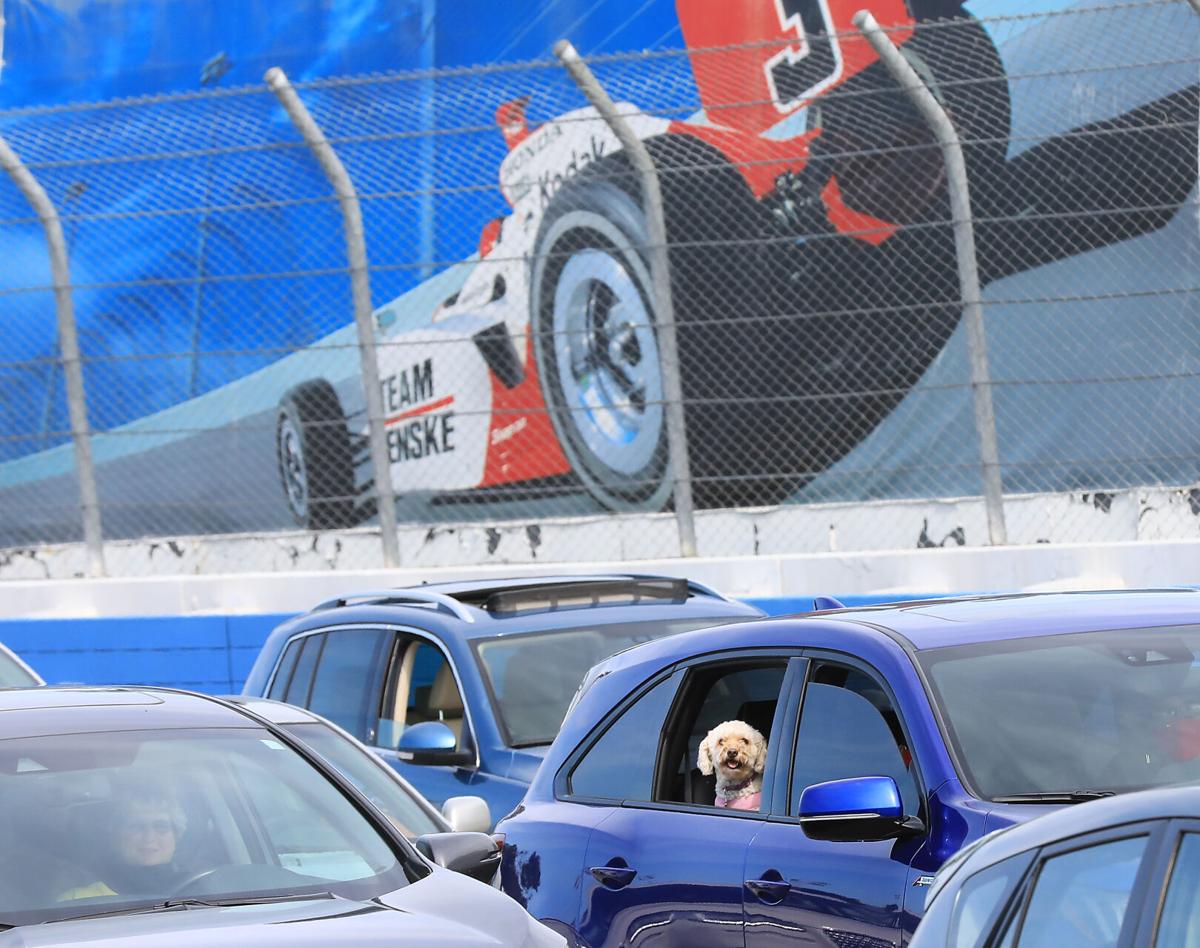 The Milwaukee Mile is one of the oldest speedways in the world but on Thursday it served as a staging area for motorists and at least one pooch for the Fair Food Drive-Thru. 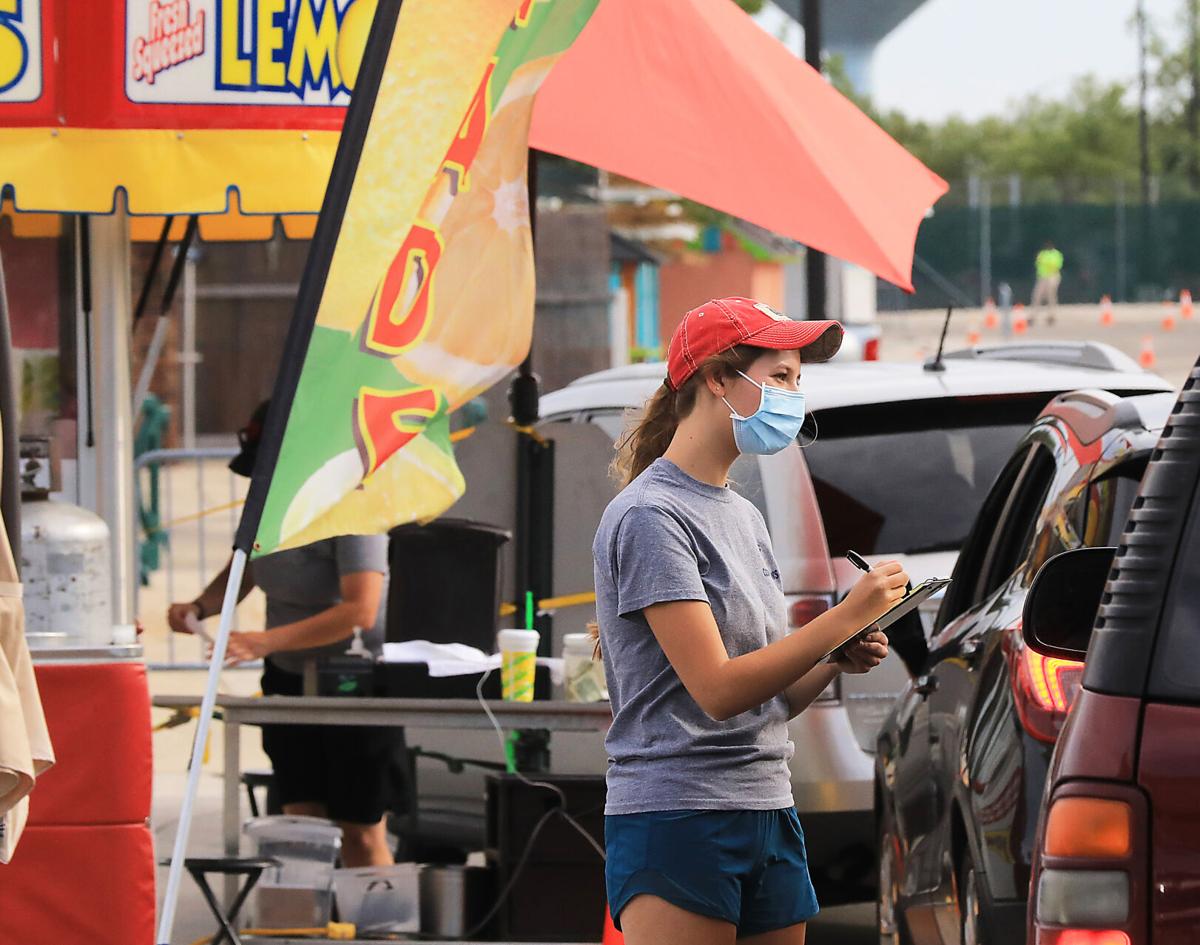 Motorists at the Fair Food Drive-Thru at Wisconsin State Fair Park in West Allis remain in their vehicles as workers take orders. Vendors such as Funnel Cakes by G&G are scattered throughout the fair grounds. 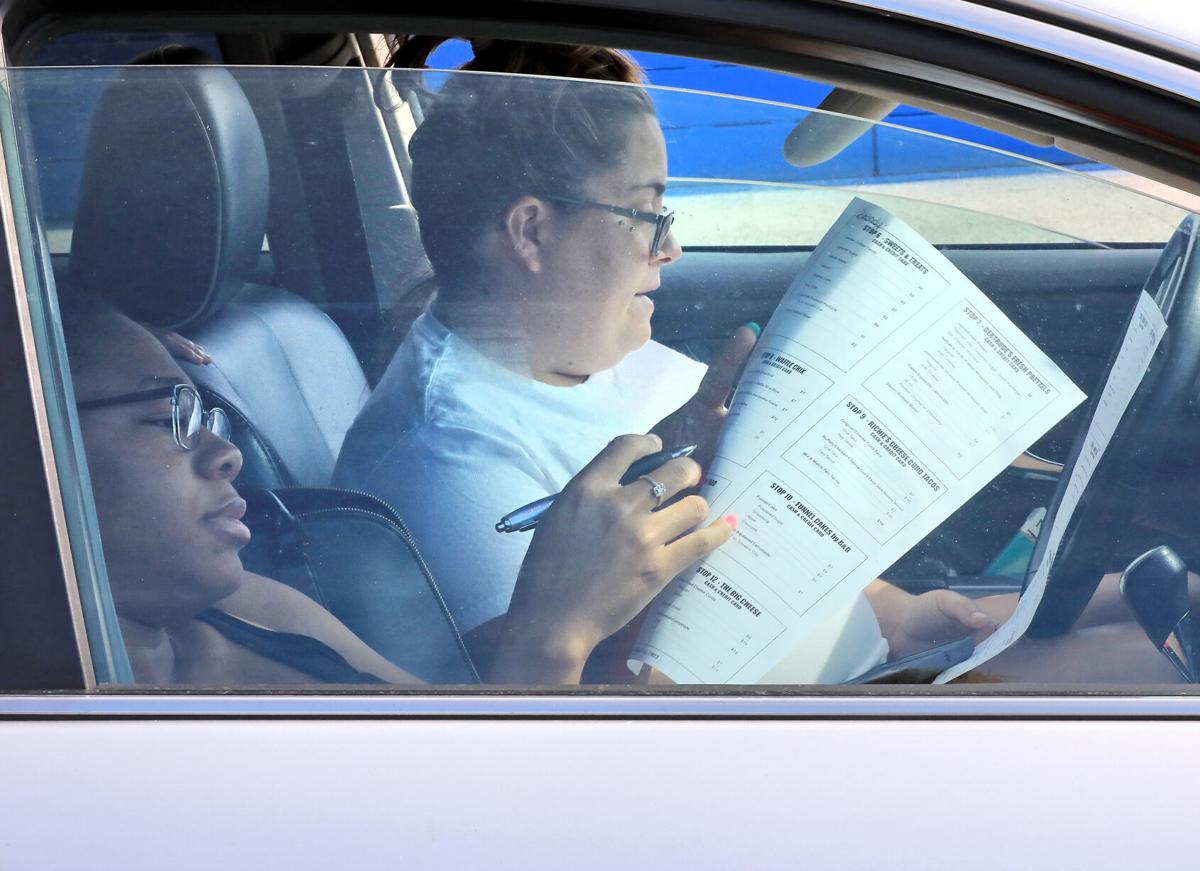 Brandy Anderson, left, and Theresa Friedrichs, both of Milwaukee, check over the menus of the 12 vendors on Thursday while waiting to enter the Fair Food Drive-Thru. 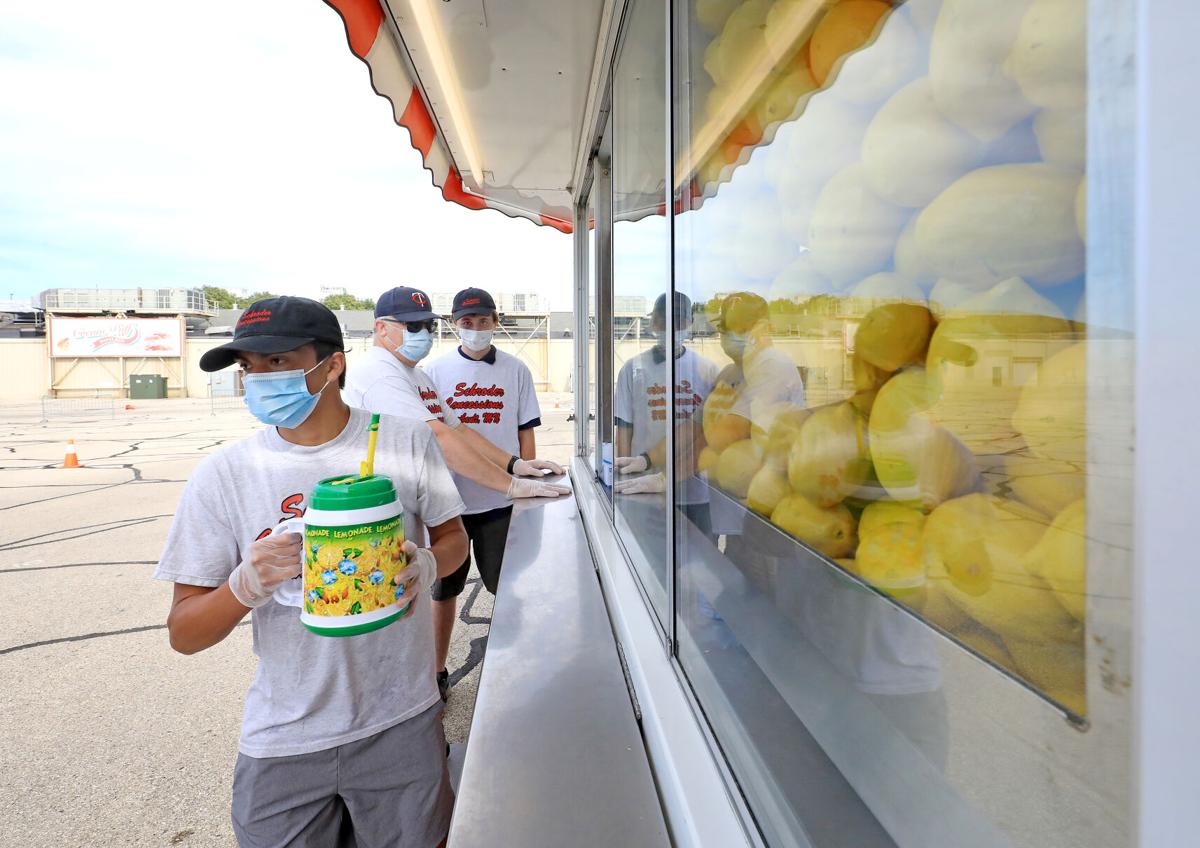 Workers with Schroder Concessions from Faribault, Minnesota, are selling at The Big Cheese stand $18 buckets of deep-fried cheese curds, $12 bloomin' onions and 64-ounce jugs of lemonade for $14 a pop. 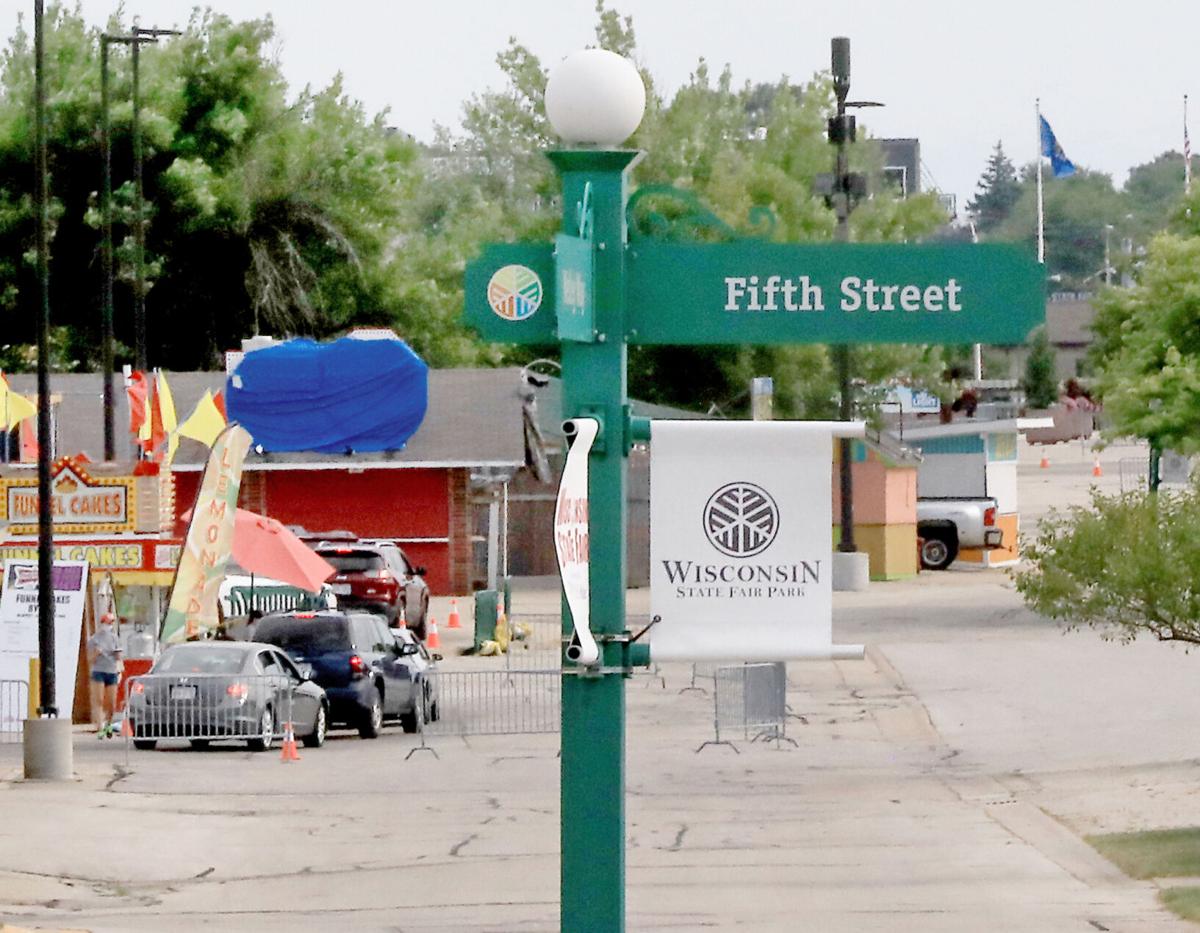 Normally bustling in early August each year, the grounds of the Wisconsin State Fair Park in West Allis remain largely quiet in 2020 after the annual Wisconsin State Fair was canceled due to the coronavirus pandemic. At left, visitors to the Fair Food Drive-Thru visit one of the event's vendors on Thursday. 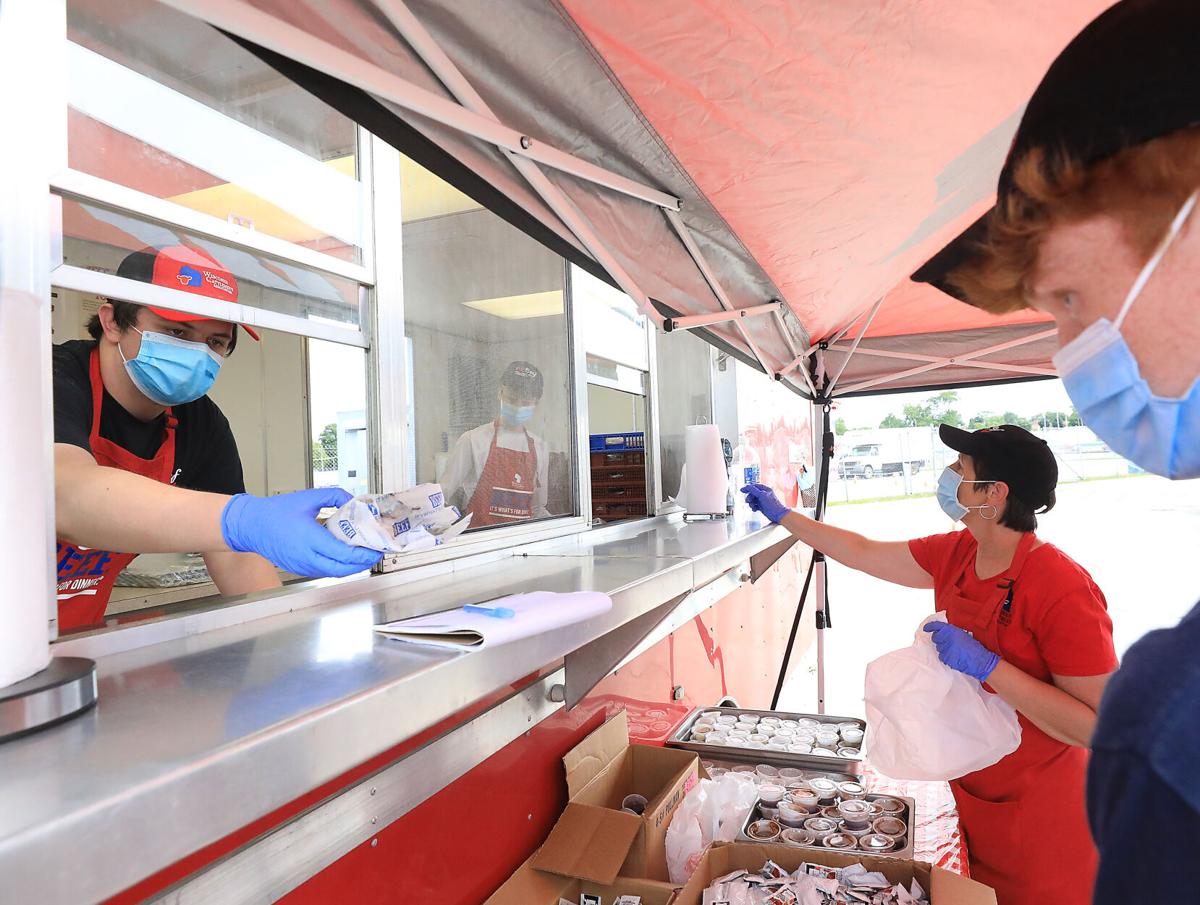 Workers at the Wisconsin Cattlemen's Association's stand were busy taking and filling orders on Thursday, their first day of eight days over two weekends at the Fair Food Drive-Thru. The stand is set up in the infield of the Milwaukee Mile. 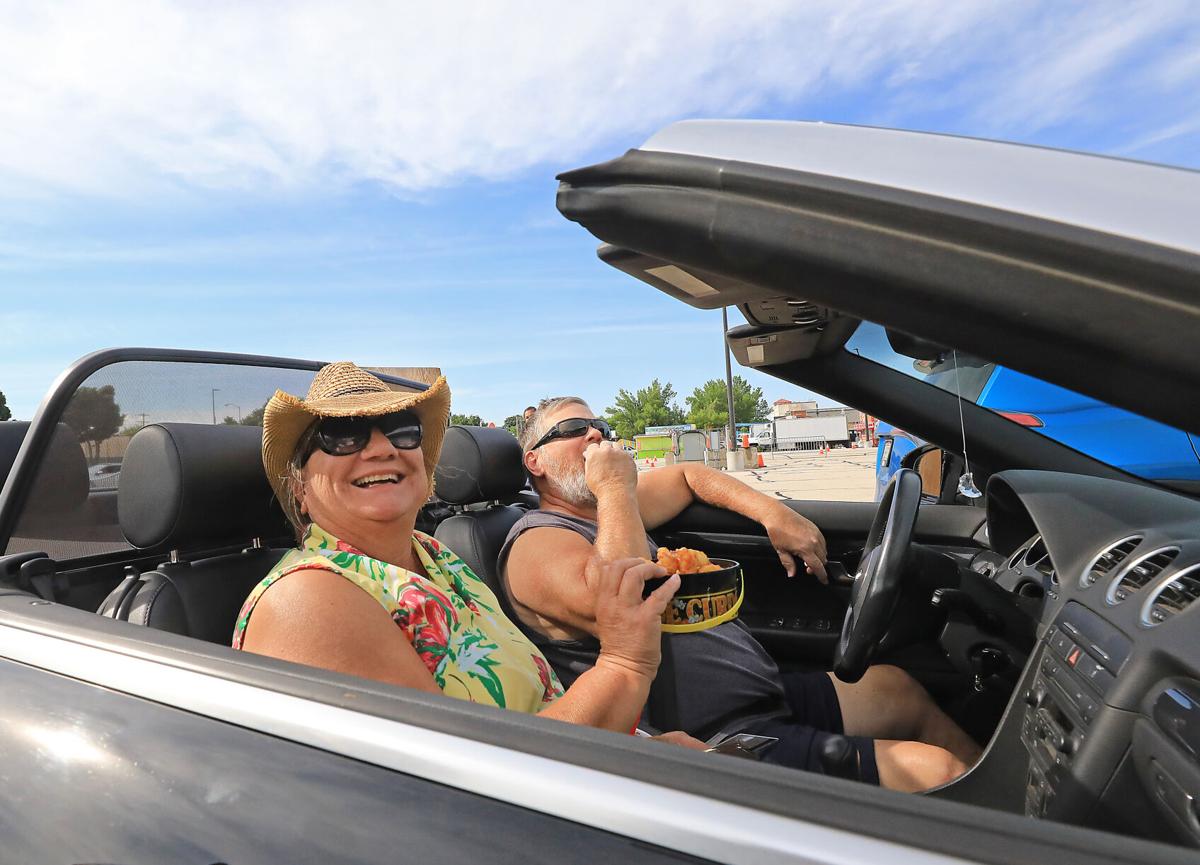