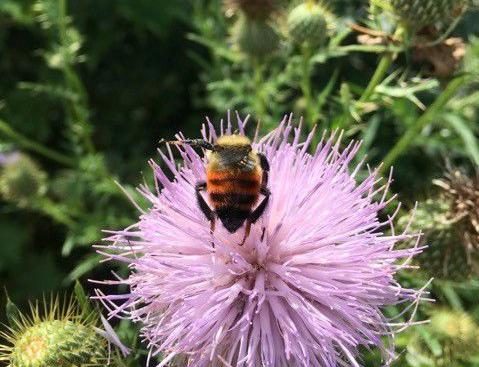 This red-belted bumble bee recently made a colorful appearance in La Crosse.

A bumble bee working on a lavender-colored thistle blossom made a colorful photo during a recent walk along the Veterans Trail in La Crosse — surprisingly colorful when the photo popped up on my computer screen that evening.

In addition to the yellow and black that one expects on a bumble bee, this bee also had a rusty red patch on its back. Seeing that, I recalled reading that there is such a thing as a rusty patched bumble bee that is on the national endangered species list.

Endangered species have been in the news recently with the Trump Administration’s revisions to how the Endangered Species Act is enforced. Could it be, I wondered, we have an endangered species right here in downtown La Crosse?

A fourth opinion settled the matter: Leif Richardson, a melittologist (scientist who studies bumble bees) said: “This is Bombus rufocinctus (red belted). You can distinguish it from B. ternarius (orange-belted) by its oval black spot between the wing bases (ternarius has black hair in this spot, but with a wedge-shaped projection pointing at the abdomen) and red rather than yellow hair on the 4th abdominal segment.”

Richardson, a graduate student at Dartmouth College, is documenting the distribution and decline of bumble bees in New England. I found him on a link in “Bumble Bees of the Eastern United States,” a website sponsored by the U.S. Forest Service and the Pollinator Partnership. He is one of the authors.

Although the bee ID was not the one listed as endangered, it turns out that all bees are in danger of decline, just not as dramatic as the rusty patched (down some 90 percent since the 1990s). Yet the rusty patched is the first bumble bee to be declared endangered under the act in 2017.

The current suspected threats to bumble bee populations (and bee populations in general) include habitat loss due to agricultural intensification, urbanization or pollution, pesticide use, pathogen spillover from managed bees, and climate change, according to the website.

Why is their decline important?

And Richardson and his colleagues also point out that the various species of bumble bees fill different niches in pollination, some depending on the length of their tongues, for example. “The length of the bumble bee’s tongue governs its food-plant choices, with bees preferring flowers with a similar depth to their own tongue length, as this tends to maximize the rate at which they can gather nectar.”

The red-belted bumble bee, my photo subject, has a short tongue and likes thistles, sweet clover, goldenrod and clovers. The yellow bumble bee, with a long tongue, is attracted to bee balm, beard-tongue, vetches and clover. So it goes among the 21 species (most of them recorded in Wisconsin) covered by the website — states fully included east of the 100th meridian. The Forest Service says there are 49 species in the U.S., a small, but vital number of the some 4,000 species of bees in North America.

Conservationists cite the services provided by threatened and endangered species as reasons why they need protection such as that provided under the Endangered Species Act. Beyond that, there is this from Aldo Leopold, Wisconsin’s great ecologist.

In his Round River essay, he wrote: “The last word in ignorance is the man who says of an animal or plant, ‘What good is it?’ If the land mechanism as a whole is good, then every part is good, whether we understand it or not. If the biota, in the course of aeons, has built something we like but do not understand, then who but a fool would discard seemingly useless parts? To keep every cog and wheel is the first precaution of intelligent tinkering.”

Elsewhere he noted that “Our ability to perceive quality in nature begins, as in art, with the pretty.” Pretty as in a picture of a bumble bee on a thistle blossom, a short-tongued creature beautiful in color and design.

Submit a letter to the editor

Letters to the editor on topics of general interest are welcomed and encouraged.