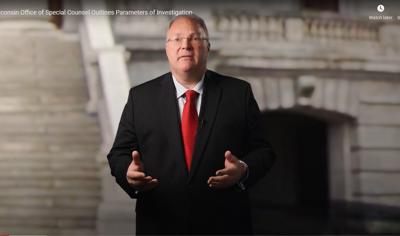 Michael Gableman got off to a bad start in his redundant review of Wisconsin’s vote for president. And his ham-handed investigation keeps getting worse.

It needs to end.

The former state Supreme Court justice was named in late July to oversee a state Assembly probe into Donald Trump’s bogus claims of election fraud and corruption in Wisconsin. State and federal court rulings — as well as elaborate and careful recounts — had already determined Wisconsin’s election was fair and accurate, with President Joe Biden winning by more than 20,000 votes. In addition, the nonpartisan state Audit Bureau wrapped up its thorough review Friday, making several recommendations for improving future elections but finding the “election was largely safe and secure,” in the words of the Republican co-chair of the Legislature’s audit committee.

That won’t be good enough for Trump, who railed on Assembly Speaker Robin Vos, R-Rochester, until Vos launched a showy search for anything resembling wrongdoing that Trump could then tout at his political rallies. Vos even agreed to hike the cost to taxpayers almost tenfold — to $676,000 if not more — after a chummy ride with Trump on his private plane to an Alabama rally.

Gableman claims he’s acting impartially in search of the truth so Wisconsin voters can be confident their elections are fair.

But only a week after Gableman was named special counsel, the Milwaukee Journal Sentinel reported that Gableman had claimed the election was stolen back in November during a speech to Trump supporters in Milwaukee.

So much for being a neutral arbiter.

Doubling down on partisan bias, Gableman hired a former Trump White House attorney to help him with his probe. The attorney, Andrew Kloster, had similarly claimed without evidence that the election was stolen.

So much for letting the evidence lead to a conclusion. Gableman and Kloster have flipped the script, searching for anything to back up their long-held and unsubstantiated accusations. Gableman has even suggested that local elections officials must show they didn’t do anything wrong. So much for innocent until proven guilty.

Gableman has confused county clerks with a cryptic email from someone name “john delta” seeking documents. Many clerks deleted the email, fearing it was a security risk. Gableman traveled to South Dakota to listen to the election conspiracies of discredited MyPillow chief executive Mike Lindell, a Trump ally. Gableman went to Arizona to learn about its partisan investigation, which recently concluded with Biden winning by a few more votes than before. Trump, ignoring the facts, again falsely claimed he won.

Remember what you said, Speaker Vos?

To show Trump he was going to be tough, Gableman got subpoenas to interview several liberal mayors in Wisconsin, including Madison’s. Then his staff canceled the interviews, which he wanted to conduct in secret. Then Gableman claimed they were still going to happen — maybe. He’s aggressively demanded documents that had already been released.

On a right-wing radio show, Gableman recently acknowledged he doesn’t know much about how elections are run. And he absurdly compared the Milwaukee Journal Sentinel to a Nazi propagandist, then walked back his comment.

Though he touts the importance of our democracy, Gableman hasn’t voted in seven Wisconsin elections over the last three years, including for governor and the state Supreme Court he served on from 2008 to 2018.

Gableman is about to blow past the original October deadline for finishing his probe.

Here’s a simple way for Gableman to wrap up this Trump-induced witch hunt for an election conspiracy that doesn’t exist. All he has to do is interview one person: U.S. Sen. Ron Johnson, R-Oshkosh.

All in favor of teaching civics in Wisconsin high schools, say aye — 'Aye!'

Caught telling the truth on a hidden camera at a Republican event in late August, Johnson explained that Trump lost because not enough Republican voters supported Trump for president in Wisconsin.

Gableman should save Wisconsin further expense and embarrassment. He should wrap up his futile and distracting investigation and go home.

Ditch the accounting tricks at the statehouse

STATE JOURNAL VIEW: With large surplus, now is the time to adopt higher standards for tracking tens of billions of dollars in public money

For decades, Wisconsin’s Legislative Audit Bureau served as an important check and balance, keeping politicians honest and financial books clean. It prides itself on being nonpartisan, independent and accurate.

Center Stage with Milfred and Hands