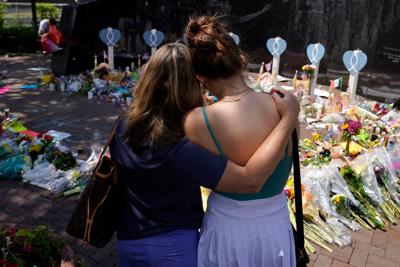 An auto shop, bus stop and modest apartments line the 6500 block of busy University Avenue in Middleton near Madison’s West Side. A popular food co-op and splash park for children are nearby.

That’s where the mass shooter left his cellphone Monday after killing seven people and injuring more than 45 at a Fourth of July parade in Highland Park, Illinois, police say.

The Highland Park massacre could have been repeated and compounded here.

Police say a 21-year-old who confessed to the murderous spree in the upscale suburb north of Chicago still had a .40-caliber rifle and 60 rounds of ammunition in his car when he arrived in the Madison area Monday afternoon. He came here, driving at least 125 miles, just hours after brutally and senselessly shattering dozens of lives in the heart of the community his family called home.

The shooter — we’re not going to repeat his name here, because he presumably sought notoriety — “seriously contemplated” unleashing further gun violence at a July 4 event in or around Madison, Highland Park police said.

Could it have been the festival in Monona? The celebration in Shorewood Hills? The patriotic band concert at a park in Madison?

Could it have been a family cookout?

We may never know. And in a way, it doesn’t matter — because every neighborhood, theater, office and public setting is a potential target for deranged people bent on death and destruction who can easily acquire weapons of war.

We can be grateful that America’s latest onslaught of gun violence was not unleashed here. We also must extend our deepest sympathies to Highland Park and help our neighbors to the southeast try to recover and heal. For those directly impacted — and who were lucky enough to survive — the horrid memories may never fade far enough away.

Highland Park followed the unspeakable carnage May 24 at an elementary school in Uvalde, Texas. It followed the racist killings May 14 at a supermarket in Buffalo, New York. Seemingly every day mass shootings terrorize some innocent community across the country.

Taking broad steps to prevent further gun violence shouldn’t even be a question. It’s a requirement and dire responsibility.

Congress acted recently in a modest way to improve background checks on gun purchases by teenagers. Our leaders in Washington came together to deter the illegal trafficking of guns, disarm convicted domestic abusers and encourage states to temporarily remove guns from individuals likely to hurt themselves or others.

All that was good. But more progress is imperative.

Much stricter and sensible limits on incredibly powerful guns are needed, given America’s chronic bloodshed. Republicans are finally starting to budge in favor of responsible public safety precautions, rather than clinging to wildly irrational definitions of freedom through military-grade firepower.

Voters must keep the pressure on political candidates in this fall’s elections.

Congress is making our schools more secure and steering additional resources to help people with mental illness. That was part of the bill President Joe Biden signed into law last month.

We appreciate that, but it has to be the start of something much bigger, not an excuse to move on.

Police should continue to train and staff public events to help ensure greater protection. But they can’t be everywhere all the time.

We all must do more to report troubling behavior, whether we see it in person or online. Illinois has a “red flag” law that allows judges to temporarily disarm people with strong evidence of imminent danger. Wisconsin should adopt something similar. But the law only works if people report warning signs.

The shooter had contact with police in recent years — once because of a suicide attempt, the other time for police to temporarily seize knives and swords after a family member reported threats.

Yet the father of the young man charged in the Highland Park shootings subsequently sponsored his son for a gun purchase, authorities say. That’s inexplicable and reckless in hindsight. Just as troubling is the inadequacy of state and federal data to track alarming behavior. The shooter’s history wasn’t shared across agencies, which might have prevented him from amassing a small arsenal of guns, including semiautomatic rifles.

Families can’t be shy about reporting one of their own to help protect their loved ones and their communities.

America’s obsession and obscene use of guns isn’t going away. But it absolutely must be restrained by our elected officials in Washington and the statehouse. Everyone must help. Raise your voice and get involved. Most important: Vote this fall for a sane and safer society.

Stephen Asma: How to stop loners from lashing out