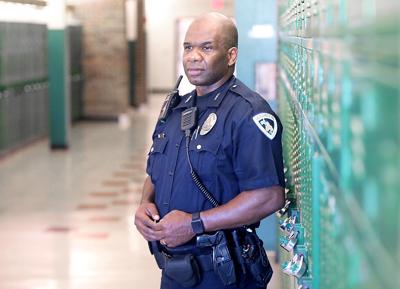 Community policing — in which officers walk a neighborhood getting to know and cooperate with the people who live and work there — long has been a hallmark of public safety in Madison.

The officers strive to become trusted and approachable friends to those they serve.

That’s why the city and School Board have for decades stationed a single police officer in each of four main high schools. The officers become integral parts of their school communities. When students or staff need help because of a fight, weapon or other serious disturbance, a school resource officer can quickly respond and better understand what’s going on and who is involved. That makes it easier to defuse difficult and potentially violent situations.

But not for long, it unfortunately appears.

Madison School Board President Gloria Reyes, a former police officer, and Madison Teachers Inc., the local teachers union, caved this week to activists who have disrupted and shut down School Board meetings over the last year, hurling obscenities at those who disagree with their demand to remove officers from schools. Last week, in the wake of the horrifying police killing of George Floyd in Minneapolis, a small group of protesters even demonstrated outside Reyes’ home.

Reyes announced Tuesday she will recommend the board remove the officers. The board appears to have enough votes for that to happen, though the timing of the officers’ exit is unclear.

We understand emotions are high and that Floyd’s death absolutely should lead to limits on police in Minneapolis and elsewhere. A Minneapolis officer pinned his knee on Floyd’s neck for nearly 9 minutes until Floyd, who was already handcuffed, couldn’t breathe and fell unconscious.

Minneapolis, though, isn’t Madison. And school officers, picked for their jobs because they love to work with young people, weren’t involved.

We fear the results of hastily pulling cops out of Madison’s high schools will be more disruptions from learning, less safety for students and staff, and worse outcomes when random officers from outside the building are called for emergencies.

America also is facing a deadly scourge of school shootings, which officers can guard against. A police officer patrolling the parking lot of Antigo High School in 2016 responded in seconds when a former student started firing a rifle at other teenagers as they left the school’s prom. The officer stopped the attack, saving untold lives.

Here in Madison, school resource officers have received tips from students about weapons in school that were quickly found and removed.

In Minneapolis, justice is being served. Derek Chauvin, the Minneapolis officer who killed Floyd, is charged with murder, while other officers are charged with aiding and abetting. All were fired.

Congress is pursuing better tracking of discipline against officers so bad cops can’t move between agencies to hide patterns of misconduct. Union protections for officers are getting needed scrutiny.

Rethinking how society keeps its citizens safe is a welcome discussion, given racism’s stubborn and vicious toll. But that doesn’t mean the Madison School Board should take cops out of local high schools, which enroll up to 2,000 students per building.

Unlike Minneapolis, Madison doesn’t allow its officers to pin their knees on suspects’ necks, a police spokesman confirmed Tuesday. Madison officers are specifically trained not to do so. Nor are “chokeholds, strangleholds or any other similar techniques” allowed unless deadly force is justified, according to acting Madison Police Chief Vic Wahl. The chief and his department have expressed solidarity with peaceful protesters in Madison.

City officials and community members have been carefully reviewing Madison’s police procedures for five years and implementing changes based on that research. The department last year trained officers on safer ways to take down violent people who resist arrest. Madison police have a special mental health unit.

The City Council is reconsidering its opposition of police body cameras, which is good news. In Minneapolis, officer-worn cameras helped show Floyd was not being violent before police took him to the ground. The technology is improving so the cameras can turn on and off automatically, based on the type of call police receive. That prevents officers from controlling what’s filmed and what’s not.

Madison has a low crime rate compared to peer cities. Yet gunfire on East Washington Avenue in Madison two nights in a row this week reinforces the need for patrol officers, detectives and a jail to help protect the public and victims of crime.

Madison still has a lot of work to do, given the disproportionate numbers of young black males who fail to graduate and become incarcerated here.

But when it comes to the four police officers at our high schools, they are part of the solution, not the problem. Three of them are black men, providing diverse role models in a district whose teaching staff is overwhelming white, even though most students are not. The officers made only 39 arrests last year in their schools, involving less than 0.5% of the district’s 8,000 high-schoolers. Some arrests weren’t even students.

Madison should support its professional and improving police force — especially the handful of officers who protect students and staff as caring members of their school communities.

COLUMBUS — It’s time for the city of Columbus to take down the Christopher Columbus statue standing sentinel in the unmowed strip of grass behind the shuttered Shopko Hometown store on the western edge of town.

OUR VIEW: Naming only one finalist for such an important position is unacceptable

OUR VIEW: Madison schools right to prioritize teacher qualifications over years of service

This police officer most definitely belongs in Madison's schools

OUR VIEW: Quick response to clean up

State Street shows us who we really are

Hands on Wisconsin: What does "Defund Police" mean? It's complicated

Depending on who you ask, the idea to "Defund Police" can mean anything from reallocated resources to completely abolishing police departments. Whatever it means, President Donald Trump will likely use the slogan to sow discord and scare people into supporting him.