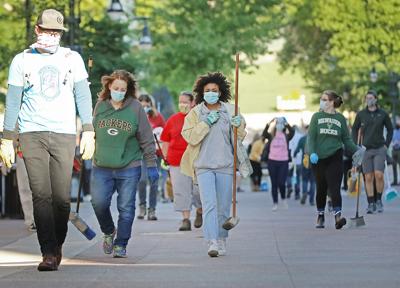 Hundreds of volunteers arrived early Sunday to help clean the wreckage from vandals and looters who damaged about 75 stores on State Street, the capital city’s signature walkway and shopping district.

Many of the locally owned stores, restaurants and bars Downtown already were struggling to survive. Most had been closed for weeks because of the ongoing coronavirus pandemic.

Now dozens of shops lay in ruins, following a late-night melee in which a small number of troublemakers broke windows and taunted and threw objects at police, who fired tear gas.

It was a terrible climax to what otherwise had been a peaceful day of protesting by more than a thousand responsible people demanding justice for George Floyd.

The unarmed black man was killed May 25 in Minneapolis after a police officer there pinned Floyd to the ground with the officer’s knee on Floyd’s neck for nearly 9 minutes. Floyd desperately shouted he couldn’t breathe until he lost consciousness. It was an outrageous abuse of force captured on video by passersby. Police had stopped Floyd for allegedly using a counterfeit $20. Floyd doesn’t appear violent in footage released from police uniform cameras.

Derek Chauvin, the Minneapolis police officer on top of Floyd, has appropriately been charged with murder. He and other officers involved were quickly fired. Protesters across the country had expressed their shock and anger for days at the latest example of police killing an unarmed black man.

The peaceful protesters who marched in Madison Saturday demanded justice and broader police reforms. It wasn’t until hours later that a smaller group began to vandalize police vehicles and windows, leading to standoffs with police on State Street. Luckily, few injuries resulted, despite hours of clashes. The situation could have deteriorated worse.

That’s when Michael Johnson, president of the Boys and Girls Club of Dane County, issued a plea on social media for volunteers to meet Sunday morning to clean up the mess and help local business owners. It was an inspiring display of community spirit. Some protesters from the peaceful rally Saturday came to help.

That’s what Madison is about: Helping others, bridging differences and pulling together for the greater good.

Our city cannot let one disturbing night of tumult divide people and slow progress toward a more just society. On Sunday morning, Madison proved it’s still the city we know and love, despite challenges ahead.

What began as a peaceful protest May 30 in Madison, where I served as chief of police for more than 20 years, erupted in violence. A police vehicle was torched, more than 70 businesses were damaged and in some cases looted, and police deployed tear gas and pepper spray.

Save State Street from virus and vandals

Center Stage with Milfred and Hands

Hands on Wisconsin: Racism is as heinous as the virus

The death of George Floyd at the hands of Minneapolis police officers has sparked justified outrage. America seems impossible of curing itself of the systemic racism that leads to the unnecessary deaths of black men at the hands of the police.