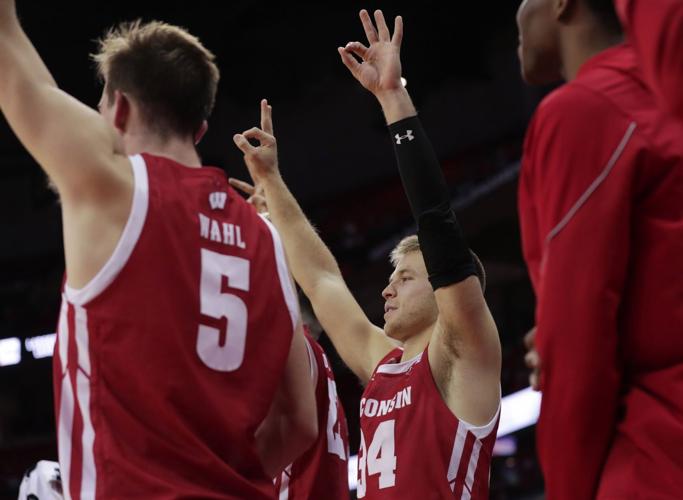 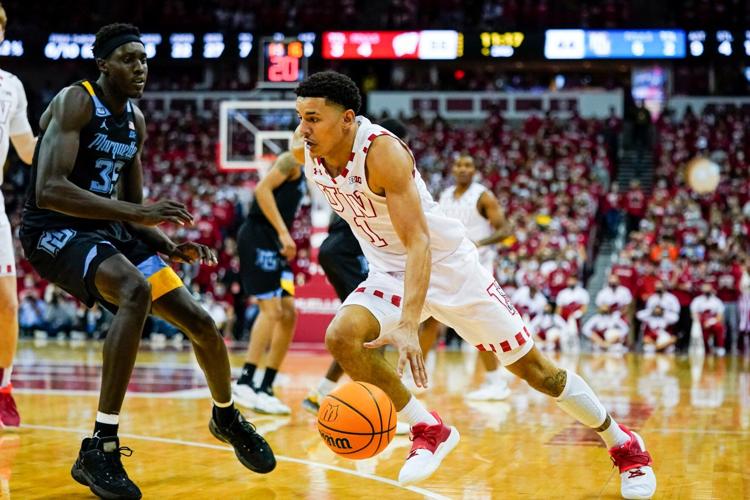 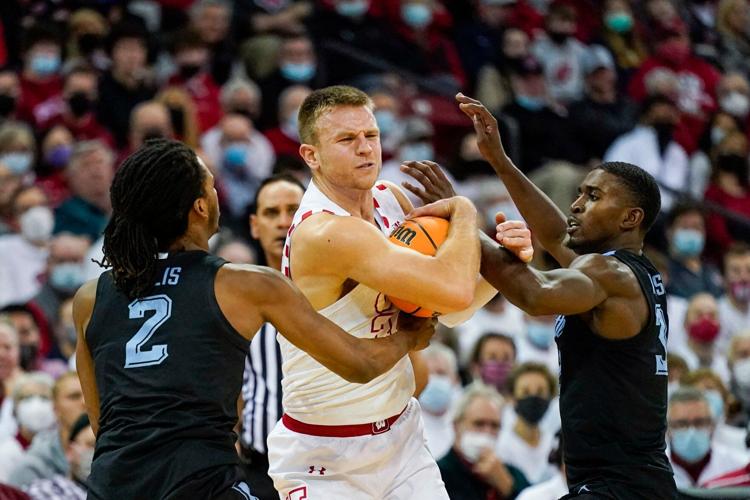 Guard Brad Davison was named the Big Ten co-player of the week with Minnesota's Payton Willis on Monday after averaging 23.5 points, 2.5 rebounds and 2.0 assists in UW's two wins last week. 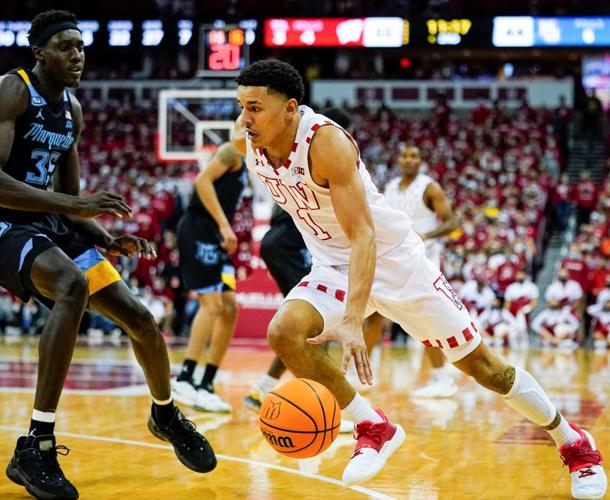 As the parent of a teenager who recently turned 16, I find myself applying the foot brake from my passenger seat a lot these days.

So what I’m about to ask of University of Wisconsin men’s basketball fans feels almost natural: Please slow down.

I’ll admit that even I’ve had a hard time managing my expectations for the Badgers after their surprisingly smooth start. I’ve shifted from pump-the-brakes to tap-on-the-brakes mode over the course of a week, thinking there might be a letdown after the Maui Invitational championship and then watching UW win a road game at Georgia Tech and handle Marquette three days later.

Greg Gard’s team is now 7-1 and ranked No. 22 in the country, up a spot from last week. UW is No. 18 in the NET rankings used to choose and seed the NCAA tournament field.

The Badgers are unbeaten with Johnny Davis in the lineup and I asked the sophomore guard after an 89-76 victory over the Golden Eagles on Saturday if there was anything that surprised him about the way UW has started the season.

“Ain’t nothing surprising about this,” said Davis, who finished with a game-high 25 points. “Every time we step on the floor, we expect to win.”

Jim Polzin: Why Wisconsin basketball freshman Chucky Hepburn is a delight to watch — on both ends

Davis and the Badgers are full of confidence and that’s great. They play hard, are fun to watch — at least most of the time — and should only get better as the season progresses because the roster is filled with youth.

I’ve seen chatter from some fans about UW being a potential second-weekend team in the NCAA tournament and others making fun of a preseason poll in which the Badgers were picked to finish 10th in the Big Ten.

Here comes my foot brake because, as smooth as the ride has been so far, the Big Ten is sure to be filled with potholes and I’m curious to see how the Badgers are able to navigate that tricky ride.

That trip begins on Wednesday night against Indiana (7-1, 1-0 Big Ten) at the Kohl Center and continues Saturday at Ohio State (6-2, 1-0). Both of those teams were picked to finish ahead of UW, so this week should provide a good gauge of whether there’s a need for the team’s outlook to be calibrated.

There were enough question marks with this team that I didn’t flinch two months ago when fellow media members from around the conference picked UW to finish so low. Some of those concerns still exist, which is why my advice is to proceed with caution.

While the Badgers have been better offensively than I thought they’d be, Big Ten defenses likely will make scoring more difficult for them. There are three Big Ten teams in the top 15 of the KenPom adjusted defensive efficiency ratings, including Indiana, and scouting reports will be more thorough than the ones opposing coaches had a chance to compile for quick turnarounds in the Las Vegas tournament, for example. (Of course, the same can be said for UW’s own scouting reports.)

Davis will be No. 1 on those scouting reports and both he — and UW as a whole — will need to find counters to avoid getting bogged down on offense. One notable thing through the first eight games: While the Badgers have encountered droughts at times, they’ve also shown the ability to score in spurts to make up for those slumps.

Another potential issue is post defense. We’ve seen both sophomore center Steven Crowl and senior backup Chris Vogt get in foul trouble — sometimes in the same half — and those two will face several tall tests in a conference that includes Illinois’ Kofi Cockburn, Michigan’s Hunter Dickinson and the Purdue tandem of Zach Edey and Trevion Williams. Ohio State’s E.J. Liddell and Indiana’s Trayce Jackson-Davis aren’t centers, per se, but they’ll present a different set of challenges for UW big men.

Finally, the quality of the Badgers’ depth remains a bit of an unknown. It’s clear the starting five of Davis, Crowl, guard Brad Davison, point guard Chucky Hepburn and forward Tyler Wahl is solid, but the reserves have been inconsistent and Gard is still trying to figure out a rotation that works best.

None of that is necessarily surprising. Again, this team is young and the makeup of the bench is a combination of transfers and players who either have barely or never played prior to this season.

A month into the season, Purdue now seems like the overwhelming favorite to win the conference and deserves to be in its own tier. Illinois, in my opinion, leads a congested second tier that includes (in alphabetical order) Indiana, Iowa, Michigan, Michigan State, Ohio State and UW. Below that is a group of six teams who either have built good records against poor competition (I’m looking at you, Northwestern and Minnesota) or are going through massive growing pains.

Where exactly the Badgers fit in the mix remains to be seen. My view through the windshield is less scary than it was a month ago, but I’d still urge you to avoid looking too far down the road. No need to slam on the brakes, but a little tap would probably be wise.

My son is rolling his eyes as I read this to him, and he’s got a point: He’s surpassed my expectations as a driver to date, and maybe UW will do the same on its own journey.

This is wild. Never saw this type of season coming for UW. Davis is an elite talent. And when he plays, everyone else seems to fit a role. Davison slides into that complimentary role. Got bigs. Got ball handlers. Depth. Size, etc. Getting more and more excited about this team

Unbelievable second half after entertaining first half. But it does raise the questions -- what do expectant parents with #Badgers loyalties do? Name their sons Davis or Davison?!

Looking up to the task

The Big10 will be a challenge but I like what I see with this team so far. If they can play D like they have and hit outside shots they will surprise a lot of people. Davis is going to be a pro, Davison provides leadership and some scoring, and Chucky plays like a senior.

The whole is greater than the sum of its parts. Will be interesting to see whether Gard goes as deep on his bench when B1G schedule begins.

Two reactions: 1) Wow!! 2) props to Gard for taking the leash off Davis. His ability to create opens up everything

Won’t usually shoot like that, but they’ve shown they can win with defense as well. Much further along than expected, even for this optimist.

I didn’t expect Wisconsin to smoke Marquette the way Badgers did in second half. Led by Davis, this team has more offensive punch than we’re used to seeing here in Madison.

Bring on the B1G Ten

Wisconsin has shown they’re now ready for Big Ten play next Wednesday against Indiana. Johnny Davis and Brad Davison are the true leaders of this young team picked 10th in the conference. This is the best Badger team I’ve seen in several years. Excellent coaching by Greg Gard!

Ahead of the curve

Liking what is happening with this group. With a few more pounds from the weight room Crowl is going to be the guy to watch. He’s a lot better than we imagined. There will be bumps in the road but these guys seem to know where they are going. Kudos to Greg Gard.

Not even the Hubble telescope could find anything as smooth as Johnny Davis with the ball in his hands....

Team plays with great pace and poise. Guards continue to grow while care of the ball. Frontline still lacks, but they are riding spurts from Davis to extend leads. Impressive start to the year.

This team is athletic but has done a great job of not playing out of control. Can't wait for Big Ten play. Also holy smokes Johnny

4 players with 15+ points is awesome

This may have been Hepburn and Crowl’s best games yet

Bring on the Big Ten!

By leaps and bounds

I can't believe the poise Chucky has, he's just solid and in control. Davis is better each game. Fun fun team thus far and great to watch them grow each game.

How impressed were we that Wahl could run two-man bringing up the ball in full court press?

I was told Wisconsin is slow and doesn’t play actual offense. I want a refund! /s

Thoroughly enjoyed giving Marquette some hope and then crushing that hope in spectacular fashion.

With Davis out there, VERY good.

Davis is a smooth player. I don't know how to describe him better than smooth.

View from the outside

As a Hawkeye fan I think you guys look outstanding right now. Another quality win.

Jumping out of the gym

Davis most athletic guy in building, Hepburn is an amazing defender. Great to beat MU!

This team is so fun to watch…because you can tell that they are having fun!

Their Defense is for real. Only going to keep getting better.

We knew Johnny Davis was a star, Wahl a great defender and capable post scorer, and Brad was a great leader who could step up when needed. What we saw in this was how good we can be when Chucky and Crowl play up to their potential.

Jim Polzin: Diss volleyball and Wisconsin coach Kelly Sheffield will be there to call you out

The Big Ten holding its first-ever media day for volleyball and entering a content partnership to deliver its matches to a worldwide audience were positive steps. But there's more work to be done.

Guard Brad Davison was named the Big Ten co-player of the week with Minnesota's Payton Willis on Monday after averaging 23.5 points, 2.5 rebounds and 2.0 assists in UW's two wins last week.