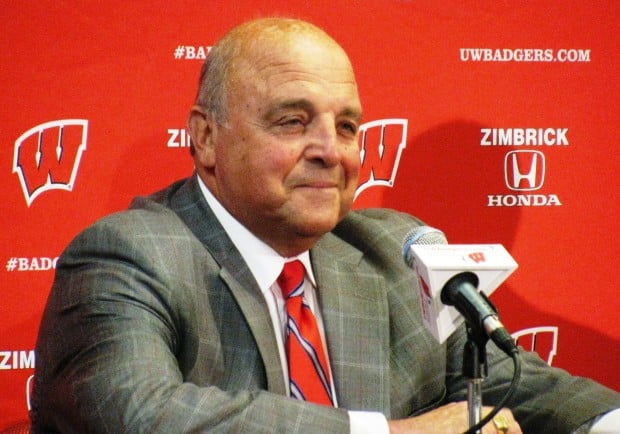 University of Wisconsin athletic director Barry Alvarez announced Thursday morning that he will return to his role as football coach when the Badgers face Stanford in the Rose Bowl on Jan. 1 in Pasadena, Calif. 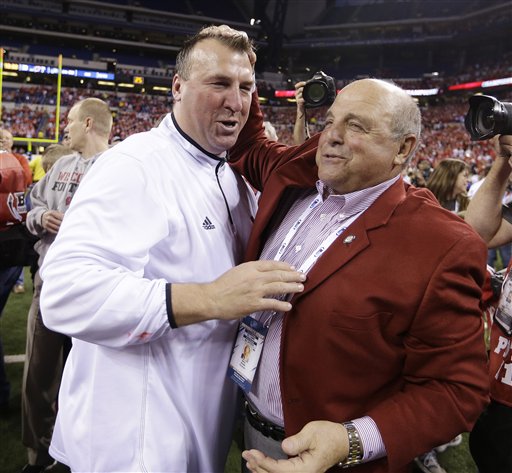 For most of the evening Tuesday, University of Wisconsin athletic director Barry Alvarez ignored the phone calls from the mysterious number with the 920 area code.

"I didn't think there was anyone in Green Bay I needed to talk to," he explained.

But when Alvarez checked his messages, he learned that the caller was standout linebacker and co-captain Mike Taylor.

The former Ashwaubenon athlete had a request: With coach Bret Bielema having bolted for Arkansas earlier in the day, the senior class wanted Alvarez to lead them in the Rose Bowl.

Alvarez was honored but had one condition for returning to the sidelines.

"I told him I would be honored to coach them," Alvarez said. "I wanted them to understand, if I was going to coach them, we weren't going to screw around — we were going to go out there to win."

At a press conference Thursday morning at the Kohl Center, Alvarez made official what the Wisconsin State Journal reported Wednesday evening on its website — that the Badgers' all-time winningest coach will look to build on his 118 career victories against Stanford on Jan. 1 in Pasadena.

Alvarez, who last coached in 2005, directed the Badgers to a 3-0 record at the Rose Bowl and has a chance to tie Woody Hayes for the most Rose Bowl victories by a Big Ten coach.

A member of the College Football Hall of Fame, Alvarez becomes the second Rose Bowl Hall of Famer to coach in the game after being enshrined. Madison native Rick Neuheisel led Washington to a win in 2001.

Fifth-year senior quarterback Curt Phillips, who initiated contact with Alvarez via text message before Taylor placed his call, said that the idea to ask Alvarez to coach them was embraced as soon as it was suggested in a small-group players meeting.

"It couldn't be a better opportunity — someone who's had success on this stage and can show us how it's done," Phillips said. "He knows the formula for success there. This gives guys a chance to really rally around him and have something extra to play for.

"Guys are extremely excited to play for him."

Running back Montee Ball: "Looking forward to being coached by one of the greatest of all time In my last game as a badger! Let's go get em! #onwisconsin"

Offensive lineman Travis Frederick: "Excited and honored to have Coach Alvarez working with us for the Rose Bowl. Let's make him 4-0!"

Tight end Jacob Pedersen: "Excited and honored to play for coach Alvarez! (It's) time to get to work! #badgers #wiscONsin"

Ethan Armstrong: Honored to be coached by one of the greatest of all time. Such a privilege to have coach Alvarez come back #4-0"

Alvarez made clear that this is a one-time return to coaching, and that he will begin interviewing candidates to replace Bielema next week.

Notably, Alvarez ruled out one choice popular among the fan base — Pittsburgh coach Paul Chryst, a Madison native who served as the Badgers' offensive coordinator through last season.

"I asked some very close friends of mine to help Paul get that job," Alvarez said. "I wouldn't feel right and it wouldn't be appropriate ... for me to hire him."

Alvarez said he will not use a search committee to vet candidates.

Alvarez expressed a level of frustration that Bielema accepted the Arkansas job without talking to him first, and that no Razorbacks representative contacted him to ask permission to talk to Bielema, which he said is a courtesy but not a rule.

"I don't feel betrayed," Alvarez said. "I'm very pleased with the job Bret did for me."

The chance to see Alvarez on the sidelines one more time is sure to entice some alums and boosters into making trips to the Rose Bowl, too.

Wisconsin supporters will always appreciate Alvarez, who took a program that was little more than a laughing stock for three decades and turned it into one of the Big Ten's top teams. Wisconsin had had five straight losing seasons before Alvarez arrived in 1990, and posted a winning record in just six of the previous 26 seasons. After losing to USC in the 1963 Rose Bowl, Wisconsin would go 19 years without a bowl appearance.

The Badgers were in such sorry shape that the Wisconsin band's postgame show — The Fifth Quarter — was the main attraction at Camp Randall.

But under Alvarez, Wisconsin became known for big, stingy defenses, a power running game and a massive offense line that would soon be imitated throughout college and the pros. The Badgers had a Big Ten-record 10 straight seasons with a 1,000-yard rusher under Alvarez, and Ron Dayne became the school's second Heisman Trophy winner in 1999.

Four years after taking over, Alvarez led the Badgers to a 10-1-1 record, a No. 4 ranking and the 1994 Rose Bowl. Wisconsin has had only two losing seasons since then.

Alvarez's return also gives the Badgers something to talk about besides their less-than-impressive record. Wisconsin is headed for the Rose Bowl at 8-5, and more than a few people have said the Badgers aren't worthy of a spot in a BCS bowl.

Wisconsin was just third in the Big Ten's Leaders Division. But neither Ohio State nor Penn State was eligible for the postseason because of NCAA sanctions, sending the Badgers to the Big Ten title game by default.

Jim Polzin: Wisconsin football's failure against rival Minnesota 'a disgrace to the program'

The Badgers started the regular season talking about making history and completing unfinished business. They ended it by getting pushed around by their rival.

University of Wisconsin athletic director Barry Alvarez announced Thursday morning that he will return to his role as football coach when the Badgers face Stanford in the Rose Bowl on Jan. 1 in Pasadena, Calif.