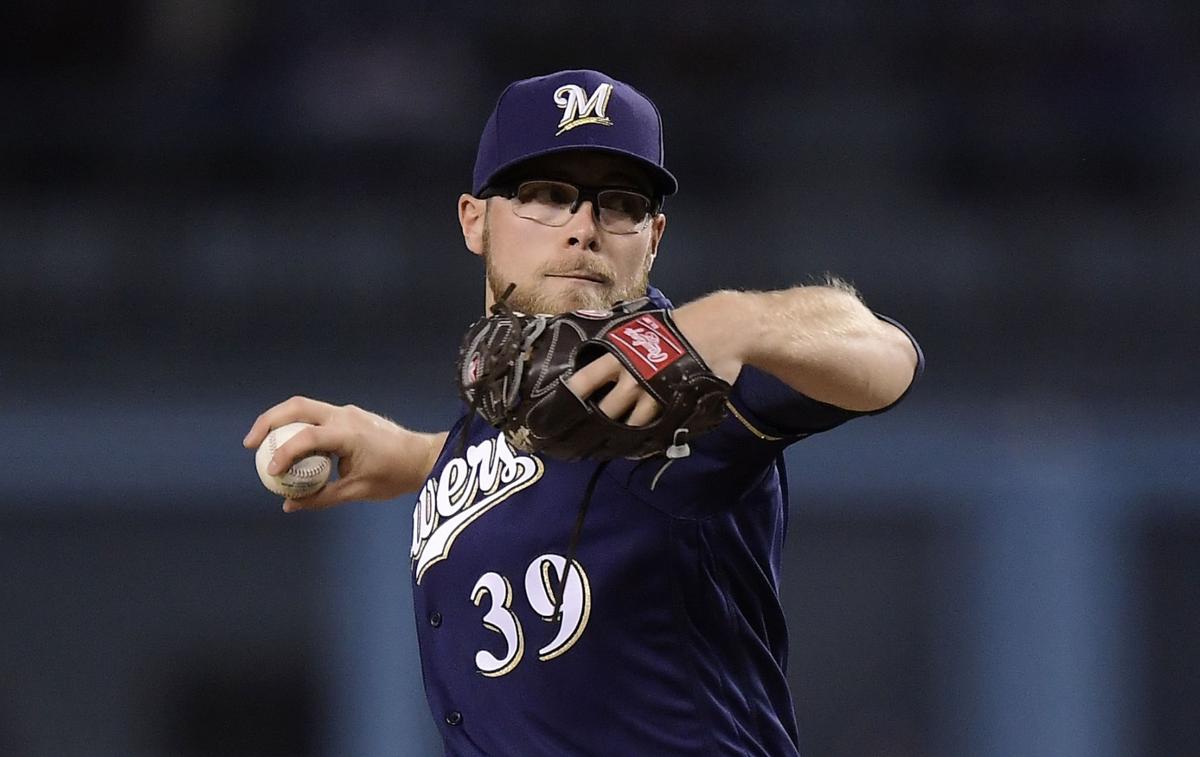 Corbin Burnes was 1-5 with an 8.82 ERA in 32 games, including four starts, for the Brewers last season. 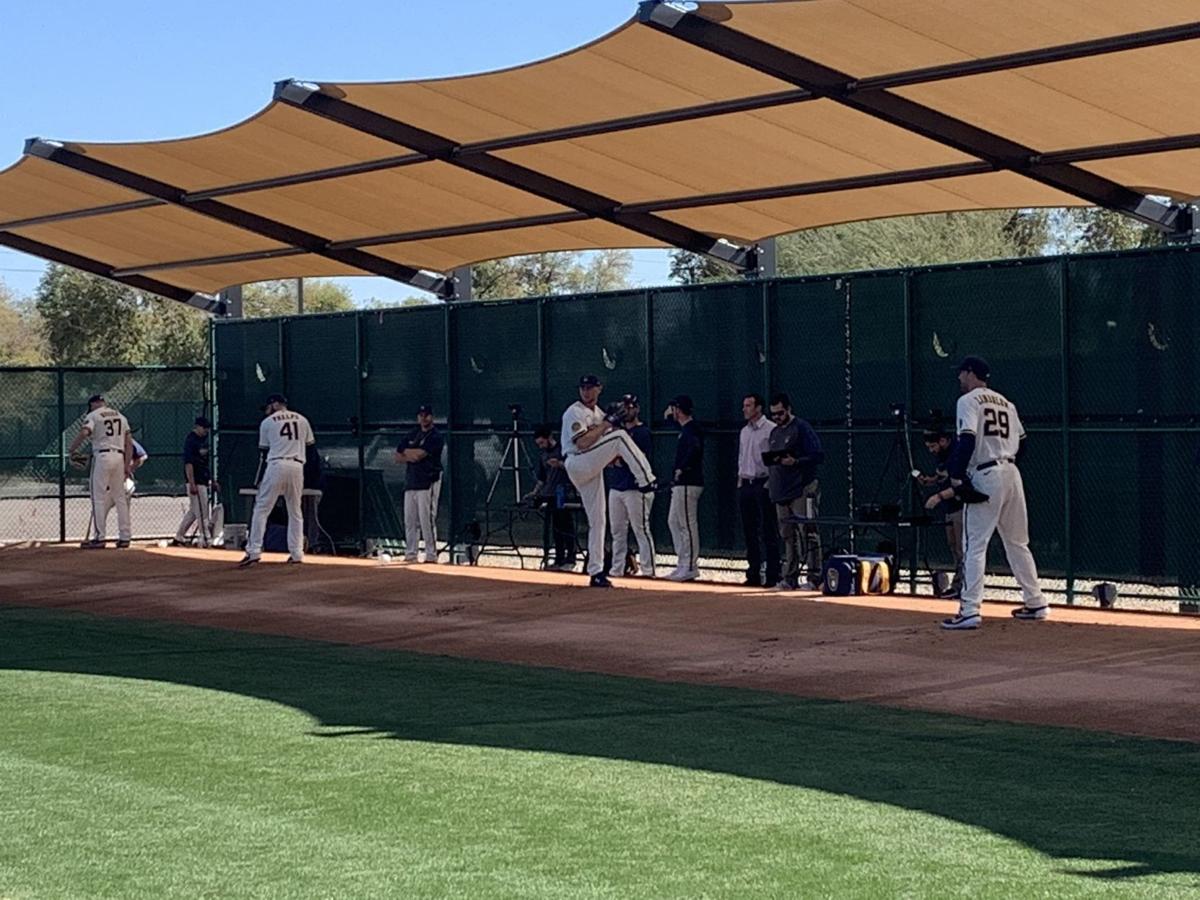 Brewers pitchers throw on Thursday at the team's spring training camp in Phoenix.

Corbin Burnes was 1-5 with an 8.82 ERA in 32 games, including four starts, for the Brewers last season.

Brewers pitchers throw on Thursday at the team's spring training camp in Phoenix.

PHOENIX — Corbin Burnes is rebuilding, just like the Milwaukee Brewers were a few years ago,

The 25-year-old right-hander spent most of his offseason at the team’s spring training facility trying to rebound from an awful 2019 season.

The franchise’s minor league pitcher of the year in 2017, Burnes debuted the following July and quickly established himself as a key bullpen contributor. He went 7-0 with a 2.61 ERA and 35 strikeouts in 38 innings over 30 regular-season appearances, then allowed two runs in six postseason innings.

While he had a 4.84 ERA in seven spring training games last year, he started the season in the rotation. He struck out 12 in his first big league start but also gave up home runs in the first inning to the Cardinals’ Paul DeJong and Matt Carpenter, then another in the fourth to Paul Goldschmidt. He allowed 11 home runs with a 10.70 ERA through four starts, was dropped from the rotation and finished with a 1-5 record and 8.82 ERA in 32 games overall.

Except for a weeklong cruise with his fiancee and a few days off around the holidays, Burnes spent nearly every day of his offseason training for 2020.

“That’s the most work I’ve done during an offseason,” Burnes said. “We were hitting it pretty heavy seven days a week now for the past three months. It definitely hasn’t been easy, but this is the best I’ve felt in my career.”

He took some consolation from metrics that said his slider was among the major leagues’ better pitches.

“I didn’t want to wipe the slate completely clean,” Burnes said. “So for me, it was how can we start with the slider and make everything around it better which, in turn, makes the slider better?”

Right-hander Brandon Woodruff is the front-runner to start the March 26 opener against the Chicago Cubs after going 11-3 with a 3.62 ERA despite missing nearly two months because of a strained oblique. Right-hander Josh Lindblom and left-hander Brett Anderson signed as free agents, and lefty Eric Lauer was acquired from San Diego. Other options include righties Freddy Peralta, Adrian Houser and non-roster invite Shelby Miller.

“You always appreciate it when a player goes through a tough season and he takes stock of everything and makes tangible decisions to change some things and work on some things,” Counsell said. “He’s got a fresh start and we’re eager to see it.”

How the fifth spot in the rotation is filled also could impact how the Brewers set up their bullpen to start the season.

For now, left-handers Alex Claudio and Josh Hader and right-hander David Phelps are the only locks for relief jobs. Assuming the Brewers stick to their plan of keeping Brent Suter in the bullpen, that would leave four open spots — one of which would go to Corey Knebel if he returns from Tommy John surgery on schedule sometime in May.

“I think we have questions to answer in the bullpen,” Counsell said. “And I think our mind is pretty open to a lot of people in that scenario.”

Counsell will have no shortage of right-handed options to fill those spots with Taylor Williams, Ray Black, Bobby Wahl and Devin Williams among the returning front-runners.

“We are going to hope that we have a lot of guys throwing the ball really well, that the decision is really hard at the end of spring and that we have candidates,” Counsell said.

All-Star closer Josh Hader went to a hearing with Milwaukee on Thursday after just making the eligibility cutoff with 2 years, 115 days of major league service.

Hader asked for a raise from $687,600 to $6.4 million, and the Brewers argued for $4.1 million. A decision from arbitrators Mark Burstein, Dan Brent and Frederic Horowitz is expected Friday.

A shaggy-haired left-hander who turns 26 in April, Hader had 37 saves in 44 chances and went 3-5 with a 2.62 ERA in his second straight All-Star season.

He failed to hold a 3-1 lead in the eighth inning of the NL wild card game, loading the bases by hitting one batter, walking another and allowing a bloop single, then giving up a two-out, bases-loaded single to Washington’s Juan Soto that scored three runs. The Nationals won 4-3 and went on to their first World Series title.

Start of work on Miller Park

Present and future in one view

Workers lowered by crane onto roof

Taking the field for first opener, 2001

Heritage. Hustle. Heart. Wisconsin, this is for you. #glovestory

Join now & SAVE on your first 3 months!