Christian Yelich, Brewers bail out Corbin Burnes in victory over Pirates
0 Comments
Share this
{{featured_button_text}}
1 of 3 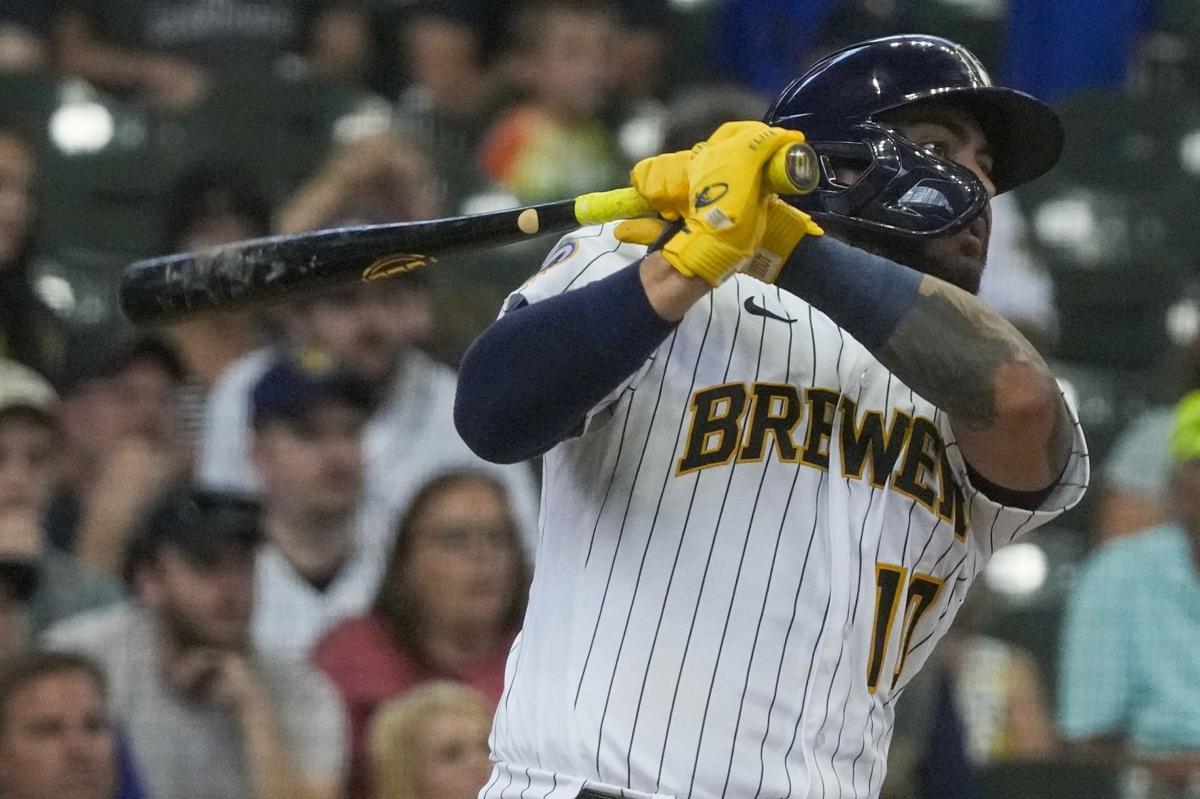 Brewers' Omar Narvaez hits an RBI single against the Pirates during the third inning at American Family Field. 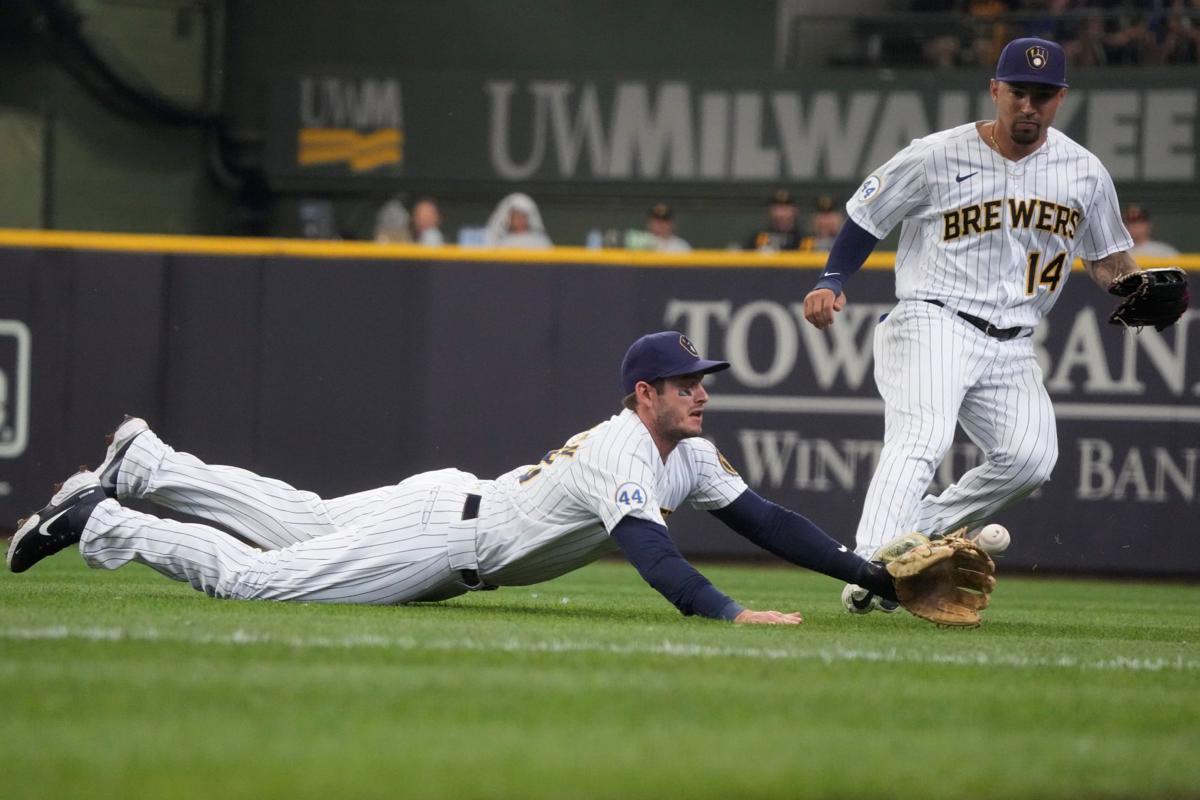 MILWAUKEE — Right-hander Corbin Burnes has made things easy for his teammates this season, shutting down opponents and working deep into games.

When he failed to do either of those things Saturday, Milwaukee paid him back with a dominant bullpen effort and a five-run outburst in the fourth inning that led to a 7-4 victory over the Pittsburgh Pirates at American Family Field.

“We kind of owed him one of those,” Brewers manager Craig Counsell said after his team won for the 13th time in 15 games.

Burnes allowed three runs in the first inning and one in the second before finding his footing. After Burnes loaded the bases with no outs in the fifth, Trevor Richards (1-0) relieved and struck out three straight batters to end the threat and preserve a three-run lead.

“That’s obviously the best inning we’ve seen him have,” Counsell said of Richards.

Christian Yelich delivered the game’s biggest hit, doubling to left-center with the bases loaded and one out in the fifth inning. It was one of two hits for Yelich, who recorded his first multihit game since May 24 and sixth of the season.

“I was just trying not to really roll something over,” Yelich said. “Make sure that if you’re going to go early there, swing at a pitch early in the count, make sure that you’re being smart with it.”

Pittsburgh right-hander Chad Kuhl (0-4) gave up six runs, five earned, with five hits and four walks over 3⅓ innings. He struck out two while losing to Milwaukee for the first time in 10 career appearances (nine starts).

“I’ve been struggling,” Kuhl said. “It’s frustrating from a personal standpoint, not being about to go out there and be the guy people expect you to be.”

The Pirates had 10 hits, including three from second baseman Adam Fraizer, but went 2-for-16 with runners in scoring position and stranded 10.

“We had some situations to score runs against the back end of the bullpen,” Pirates manager Derek Shelton said. “We have to be better and find a way to put the ball into play.”

Pittsburgh got an early jump on Burnes, who gave up four runs, two earned, on eight hits and three walks while striking out eight over four innings.

Burnes found himself in a 2-0 hole just 19 pitches into the game. Fraizer and Phillip Evans opened with back-to-back singles and scored when Burnes made a bad throw on a comebacker by Bryan Reynolds.

Reynolds scored when Jacob Stallings bounced into a double play for the first two outs of the inning, and the Pirates added another run when Erik Gonzalez and Ka’ai Tom opened the second with consecutive triples.

Burnes retired seven of his next 10 batters, striking out five, before struggling in the fifth.

“When you’re giving up bloop hits and two triples that weren’t hit over 70 mph, it’s kind of tough to get upset about it,” Burnes said. “You just shake your head. That’s baseball.”

Reliever Hunter Strickland is switching teams again as the Milwaukee Brewers attempt to see if he can regain his early-season form.

The Brewers announced Saturday they have acquired Strickland from the Los Angeles Angels for cash.

This marks the second time this season that the 32-year-old right-hander has changed teams. The Angels purchased Strickland from the Tampa Bay Rays on May 15 before designating him for assignment Monday.

Strickland had a 1.69 ERA in 13 appearances for Tampa Bay but posted a 9.95 ERA in nine games with the Angels. He didn't have a decision for either team.

"We're taking a chance on a guy," Brewers manager Craig Counsell said Saturday. "It's pretty much no risk I guess is how you'd see it. He got off to a good start this season, and then struggled a little bit with Anaheim, but we're hoping we can kind of recapture the form that he had earlier in the season. And, obviously, there's a pretty good history there of just having some success."

Brewers third baseman Travis Shaw will take a few more days to let the pain in his dislocated shoulder subside before starting a rehab plan that he hopes will have him back on the field before the end of the season.

“We’re not giving up,” Shaw said. “I think there’s a chance that 3-4 weeks from now, we start strengthening it a bit and 5-6 weeks from now we can possibly start developing a rehab assignment plan. Then, once I go down there, see how it feels playing in a game and then go from there.”

Shaw said he caught a break because the injury happened to his left, non-throwing shoulder, which also would be his lead shoulder while batting.

Along with transferring Shaw to the 60-day injured list, Milwaukee placed outfielder Tyrone Taylor on the 10-day injured list with a strained right shoulder sustained while making a throw during batting practice on Friday, and recalled utilityman Tim Lopes from Triple-A Nashville.

The Pirates recalled right-hander Will Crowe (0-4, 7.26 ERA) from Class AAA Indianapolis to start Sunday. Right-hander Adrian Houser (4-5, 3.66) gets the nod for the Brewers.

Brewers' Omar Narvaez hits an RBI single against the Pirates during the third inning at American Family Field. 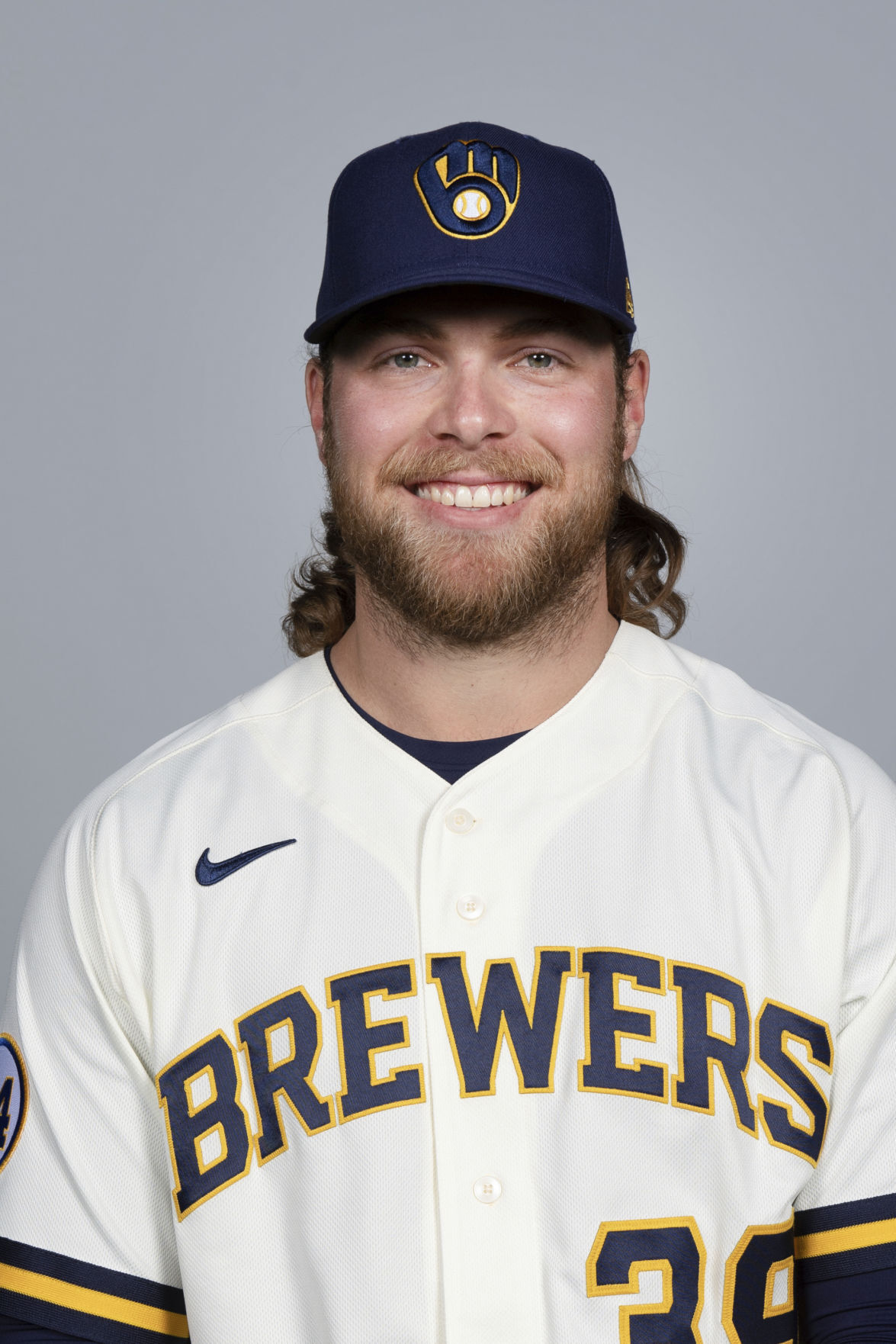