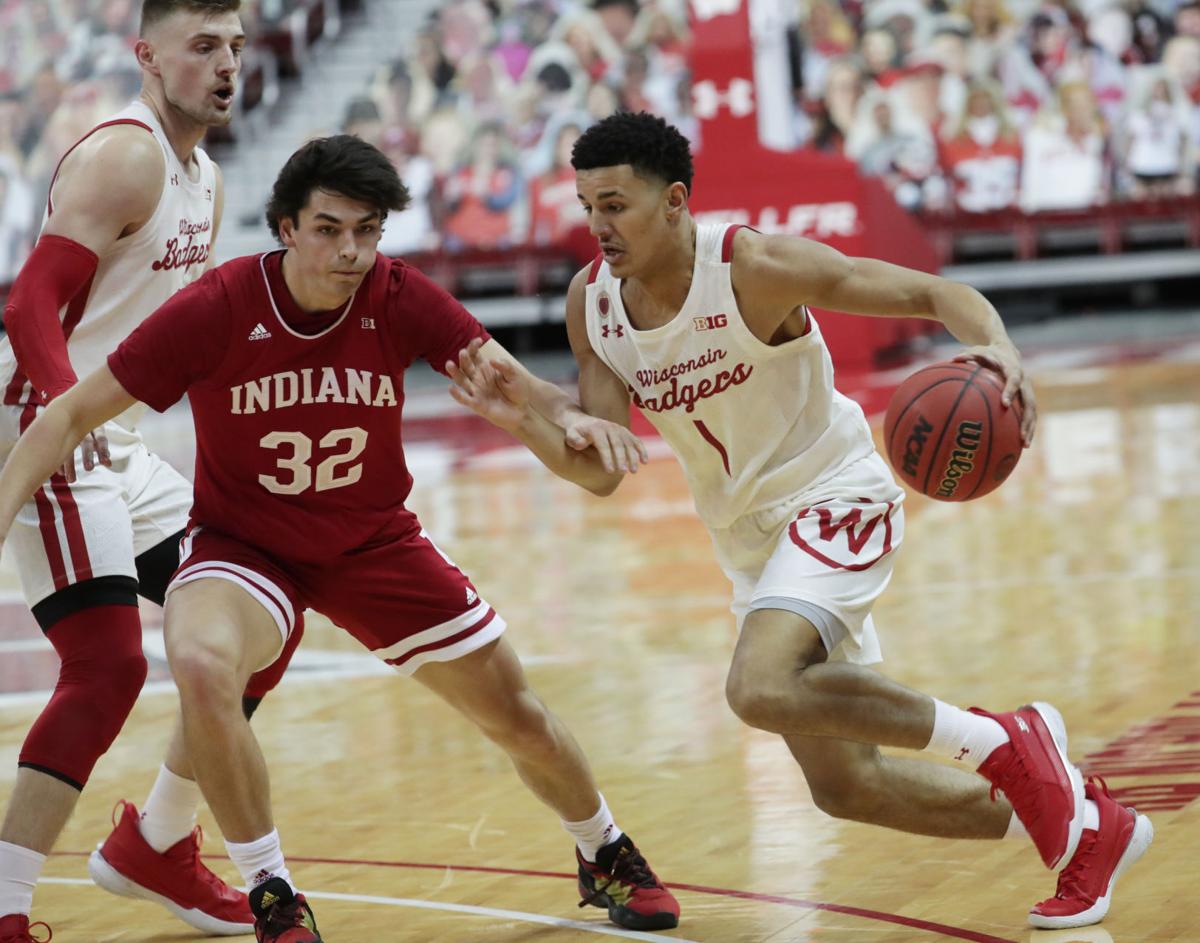 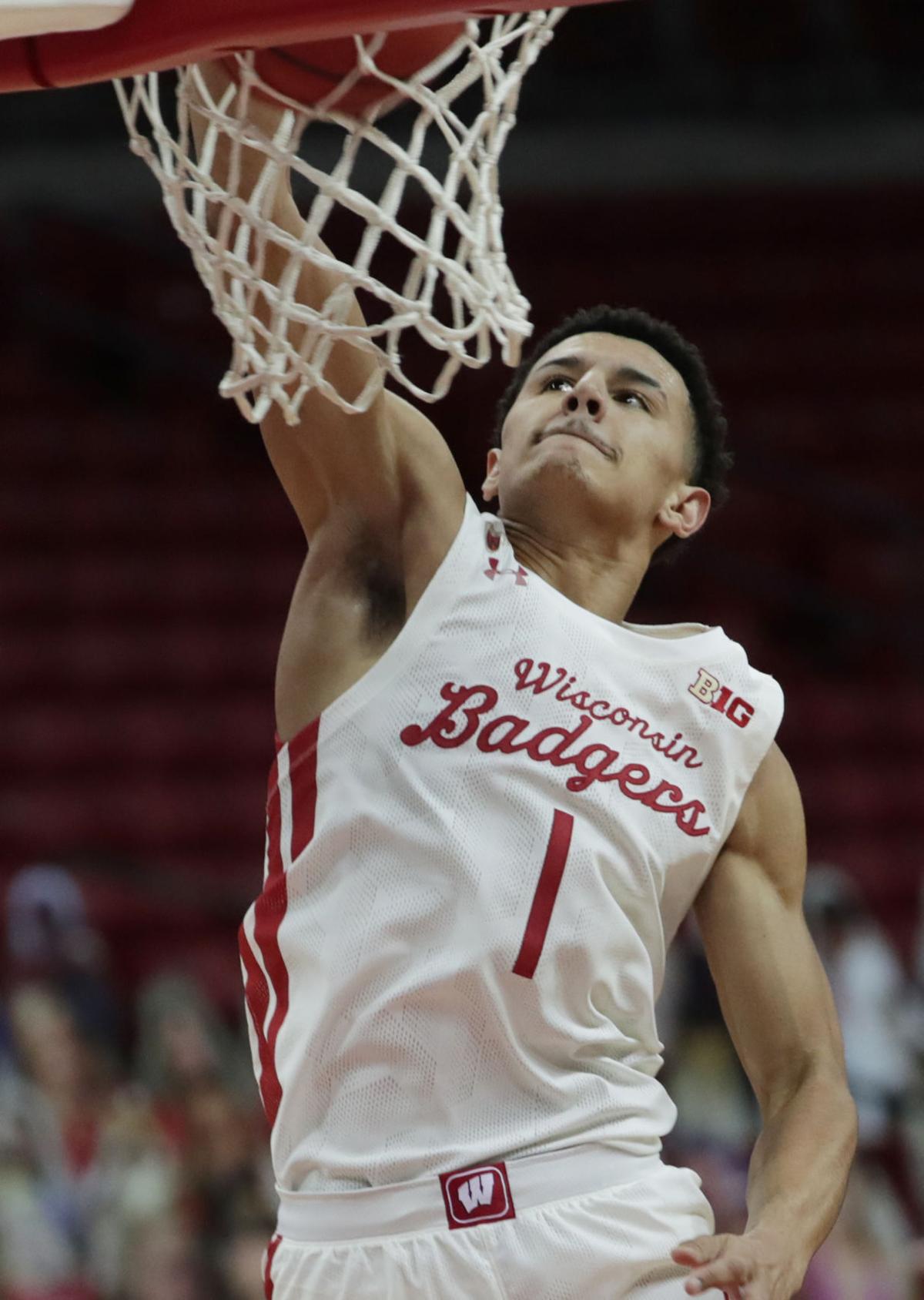 Badgers freshman guard Jonathan Davis dunks during a win over Minnesota on Dec. 31.

ANN ARBOR, Mich. — The good thing about having a rotation with eight quality players is it gives Greg Gard plenty of lineup options.

The trick for the University of Wisconsin men’s basketball coach is finding the right mix — at the right time — and knowing when to tinker and when to stick with it. Gard has embraced analytics, at least to some degree, but admits that data overload can lead to what he calls “paralysis from analysis.”

Mostly, Gard relies on his eyes and instincts.

When the game was on the line last Thursday against Indiana, Gard sent out a defensive-minded lineup that included two bench players. That decision played a key role in the Badgers getting enough stops to extend the game and, ultimately, produce an 80-73 win in two overtimes.

Gard and his staff will come up with a plan of attack for a key game between No. 9 UW (10-2, 4-1 Big Ten) and No. 7 Michigan (10-0, 5-0) on Tuesday night at Crisler Arena knowing full-well they may have to adjust on the fly. Just because a lineup has worked against one opponent doesn’t mean it’s going to be effective the next time out.

However, some things are becoming clear as UW nears the midpoint of its regular season. Gard favors three lineups and the least efficient unit in that group is the one that has started every game this season.

The remaining two lineups are the aforementioned defensive-heavy group and another that seems to be UW’s best offensive grouping. Both, interestingly enough, include freshman guard Jonathan Davis.

As Gard said earlier this week when asked about his decision-making process regarding who’s on the floor at important times, “There’s not an exact science to it.”

“I don’t sit there with an algebraic equation and plug things in and it gives me an answer,” Gard added. “I ask the assistants what they’re seeing and then kind of go with what my gut is eventually at the end of it.”

One of the talking points during a longer-than-usual offseason was whether UW could find a way to have its two bigs — seniors Micah Potter and Nate Reuvers — on the floor together more often this season.

Those two have been part of a qroup that has started all 24 halves for the Badgers this season and also includes senior forward Aleem Ford, senior point guard D’Mitrik Trice and senior guard Brad Davison. But over the past nine games, a stretch that has included five Big Ten games and four non-conference matchups against teams in the Top 100 of the KenPom rankings, UW’s starting lineup has yielded average results.

Gard even brought up the two-big lineup unprompted following the Badgers’ 70-64 home loss to Maryland on Dec. 28.

“You wondered why I’ve gone back and forth with only one big in the lineup, now you see why,” he said. “Because it’s hard to guard when you have multiple ball-handlers on the floor and they can really stretch you out and put you in a quandary defensively.”

Analytic data suggest the bigger issue for the starting group is on the other end of the court. Over that nine-game segment, the starters have produced 77 points in 90 possessions, an average of 0.86 points per possession; in Big Ten play, its offensive efficiency (0.69 PPP) is even worse.

Defensively, the starters are holding opponents to well under 1.0 point per possession in both Big Ten play and when the final four non-conference games are included.

So why doesn’t Gard make a change or two in his starting lineup to get his best five players on the court? It’s not that simple.

For starters, Gard would have to bench a senior (or two) and run the risk of disrupting chemistry. Plus, a straight comparison of lineup production isn’t easy because the opponent needs to be taken into account; namely, UW’s starters are typically going up against the other team’s best lineup while the Badgers’ secondary lineups may have the advantage of being paired against weaker bench lineups for the opponents.

Besides, the opening lineup on the court each half is merely a starting point and Gard has shown a willingness to use two other lineups just as often in Big Ten play.

The numbers suggest UW’s best offensive lineup of those three is the one that includes three guards — Trice, Davison and Davis — paired with Ford and Potter in the front court. That group is averaging 1.29 points per possession.

But when Indiana was scoring at will against that lineup in the second half last Thursday, Gard replaced Ford with sophomore forward Tyler Wahl and swapped out Potter for Reuvers.

“I felt our only chance was we had to get things under control defensively and who were going to be the five that was going to give us the best chance to do that,” Gard said. “That’s where I was going to put all the chips at that point in time.”

Based on how he’s distributed playing time, it’s clear Gard believes he has a winning hand with Davis in the mix. Since the loss to Maryland, only Trice (80) has played more minutes than Davis (71).

That the former La Crosse Central standout went 2 of 11 from the field and still played 41 of a possible 50 minutes in the win over Indiana was telling. His athleticism is an asset on both ends of the floor and helps Gard’s quest to get the right amount of offense and defense on the floor without the other category suffering.

Davis’ shot selection still needs work and, with only 12 games under his belt, there’s plenty of room for growth in terms of understanding UW’s system. But he has solid instincts and came up with some big rebounds in the Indiana game — he led the team with eight — by winning 50/50 balls.

“There’s going to be some freshman miscues, that’s part of it, that’s part of the growing,” Gard said. “But just his ability to go make plays on both ends of the floor is what gives me the desire to have him on the floor more minutes.”

Reuvers presents an interesting conundrum for Gard because of his inconsistency.

In the first half of the five Big Ten games this season, Reuvers has gone 3 of 18 from the field with no free throw attempts for a total of six points.

“I don’t know if it’s just mentally or just not being physically ready in that first half and ready to go,” Reuvers said this week. “I’m obviously trying to switch up some things and have a bigger impact in the first half because I notice it, too. But when it gets late in that second half, I obviously am more focused and love playing in those tight games. It’s a lot of fun.”

Down the stretch of the Indiana game, Gard wanted Reuvers on the floor because of his defense. That meant an extended stay on the bench for Potter, who sat for most of the final 16-plus minutes of the game.

FS1 television cameras caught what looked like a heated exchange between Potter and UW assistant coach Alando Tucker shortly after Gard made the changes to shore up the defense. Potter downplayed the moment and said it was “a player and a coach talking about different things.”

When Potter finally got back in the game in the second overtime, he made the most of a stint that lasted 1 minute, 48 seconds. He grabbed a key rebound on the defensive end and, Gard pointed out, helped create points on the other end of the floor without even touching the ball: Potter sprinting up the floor in transition drew a defender that left Wahl open for one of his back-to-back 3-pointers.

Shortly thereafter, Potter returned to the bench because Gard wanted Reuvers on the floor to close out the game defensively.

Reuvers, for his part, admitted he’s glad he’s not the one making decisions on playing time for the Badgers.

“I know it’s tough,” Reuvers said. “Everyone wants to be out there, especially in late games, too. We’ve just got to keep playing our hardest. … In that game against Indiana, Coach was saying he was putting in his five best players he thought was going to stop their team at the end of that game.

“So I know the guys that weren’t in there, obviously they want to play. Just keep working hard so when you get that shot — because it will happen — it’ll be mixed up depending on the matchups and who’s playing long in games, how the game’s flowing. It’s just nice to know that we have options, too, if someone’s not doing well in the game.”

Follow postgame coverage as No. 9 Wisconsin Badgers fall to No. 7 Michigan Wolverines

Get the latest postgame updates after the ninth-ranked Badgers were hammered by the seventh-ranked Wolverines 77-54 in a Big Ten showdown at Crisler Center.

While the 77-54 loss to No. 7 Michigan didn’t go down as the most-lopsided defeat under coach Greg Gard, it certainly qualifies as one of the most embarrassing performances of that era.

Senior point guard D’Mitrik Trice continued his steady play and finished with a game-high 20 points at Michigan, while Potter added 12. But UW got a combined 32 points on 8-of-41 shooting from the rest of the team.

UW coach Greg Gard called it a “rock fight,” but that’s exactly what was required for the ninth-ranked Badgers to win at the RAC for the first time since the Scarlet Knights joined the Big Ten in 2014.

“I really looked at it from a standpoint being a parent myself, that if we walked into a known risky situation and we had something go wrong and we got the virus transmitted somehow — hopefully not, but if that happened — I couldn’t honestly look at my players and their parents and say I’m confident in the environment we’re walking into," UW coach Greg Gard said.

The NCAA announced Monday that all 67 games in this year’s men’s basketball event will be played in Indiana due to the COVID-19 pandemic that completely wiped out last year’s tournament.

Michigan freshman center Hunter Dickinson, a giant lefty, is averaging 18.0 points and 8.1 rebounds per game while shooting 73.0% from the field and 73.9% from the free throw line.

Get ready as No. 9 Wisconsin Badgers prepare to face No. 7 Michigan Wolverines

Like father (and his father), like son: The evolution of Badgers men's basketball standout Micah Potter's 3-point shot

The University of Wisconsin men’s basketball team opens the 2020-21 season Wednesday night hoping to pick up where it left off last season, wh…

Badgers freshman guard Jonathan Davis dunks during a win over Minnesota on Dec. 31.