Brad Davison always has loved playing in front of people, and, after a season without doing so, the senior guard for the University of Wisconsin men’s basketball team is even more grateful for it.

He’s the first one to gesture to the crowd to get on their feet, whether at home or away.

Davison hit back-to-back 3-pointers in the second half against Georgia Tech on Wednesday, with the second giving UW its largest lead of the game. The Badgers fans in Atlanta were the loudest they had been all night as Davison headed back to play defense.

“That’s the best part of being Wisconsin Badgers, we travel really well,” Davison said. “Even when we have road games, there’s people there supporting us, people there rooting us on and that’s what it’s all about.”

The Badgers returned to the Kohl Center on Saturday for their first sold out game since the 2019-20 season. Davison wasn’t the only one hyping up the crowd during No. 23 UW’s 89-76 win against Marquette.

Sophomore guard Johnny Davis walked off the court for his final substitution with a smile on his face as the crowd roared to life. Once the team built a substantial lead, fans started calling for coach Greg Gard to put in the walk-ons.

The student section specifically called out junior guard Carter Higginbottom’s name, but when sophmore guard Justin Taphorn went in first they were just as loud.

“I know (the fans) don’t score any points or rebound, but going through last year without anybody … they appreciate that,” Gard said of his players. “The crowd only gets loud when we play well. It’s not really the reverse, we have to play well for the crowd. They should enjoy watching this team play because this team’s been fun to coach and very unselfish, very together.”

UW’s freshmen and sophomores never had experienced a normal atmosphere at home or away because of the COVID-19 pandemic. Some venues had limited capacity last season and some fans were allowed to attend the NCAA tournament at neutral sites.

Gard has said the players have had some nerves in games this season and again made the point after UW’s 70-66 win against the Yellow Jackets last week.

Three of the starting five are among the group who are experiencing sold out games for the first time at the collegiate level. Davis, freshman guard Chucky Hepburn and sophomore forward Steven Crowl are used to cardboard cutouts, not screaming fans.

The three didn’t hesitate in either game — even though Crowl faced “Steve, you suck,” chants from the Georgia Tech crowd. Davis produced 40 points, Hepburn had 22 and Crowl scored 20 in the games vs. Georgia Tech and Marquette.

Jim Polzin: Why Wisconsin basketball freshman Chucky Hepburn is a delight to watch — on both ends

Davison said he was impressed with how his young teammates handled a “hostile” opposing crowd.

“Their ability to tune it out and just control what they can control,” Davison said. “The crowd might get louder, you might not be in a majority red crowd, but the game doesn’t change. I was really proud of the way that we controlled, our communication was great, and I’m also excited because they feed off the crowd a little bit, and it’s fun to be around.”

This is wild. Never saw this type of season coming for UW. Davis is an elite talent. And when he plays, everyone else seems to fit a role. Davison slides into that complimentary role. Got bigs. Got ball handlers. Depth. Size, etc. Getting more and more excited about this team

Unbelievable second half after entertaining first half. But it does raise the questions -- what do expectant parents with #Badgers loyalties do? Name their sons Davis or Davison?!

Looking up to the task

The Big10 will be a challenge but I like what I see with this team so far. If they can play D like they have and hit outside shots they will surprise a lot of people. Davis is going to be a pro, Davison provides leadership and some scoring, and Chucky plays like a senior.

The whole is greater than the sum of its parts. Will be interesting to see whether Gard goes as deep on his bench when B1G schedule begins.

Two reactions: 1) Wow!! 2) props to Gard for taking the leash off Davis. His ability to create opens up everything

Won’t usually shoot like that, but they’ve shown they can win with defense as well. Much further along than expected, even for this optimist.

I didn’t expect Wisconsin to smoke Marquette the way Badgers did in second half. Led by Davis, this team has more offensive punch than we’re used to seeing here in Madison.

Bring on the B1G Ten

Wisconsin has shown they’re now ready for Big Ten play next Wednesday against Indiana. Johnny Davis and Brad Davison are the true leaders of this young team picked 10th in the conference. This is the best Badger team I’ve seen in several years. Excellent coaching by Greg Gard!

Ahead of the curve

Liking what is happening with this group. With a few more pounds from the weight room Crowl is going to be the guy to watch. He’s a lot better than we imagined. There will be bumps in the road but these guys seem to know where they are going. Kudos to Greg Gard.

Not even the Hubble telescope could find anything as smooth as Johnny Davis with the ball in his hands....

Team plays with great pace and poise. Guards continue to grow while care of the ball. Frontline still lacks, but they are riding spurts from Davis to extend leads. Impressive start to the year.

This team is athletic but has done a great job of not playing out of control. Can't wait for Big Ten play. Also holy smokes Johnny

4 players with 15+ points is awesome

This may have been Hepburn and Crowl’s best games yet

Bring on the Big Ten!

By leaps and bounds

I can't believe the poise Chucky has, he's just solid and in control. Davis is better each game. Fun fun team thus far and great to watch them grow each game.

How impressed were we that Wahl could run two-man bringing up the ball in full court press?

I was told Wisconsin is slow and doesn’t play actual offense. I want a refund! /s

Thoroughly enjoyed giving Marquette some hope and then crushing that hope in spectacular fashion.

With Davis out there, VERY good.

Davis is a smooth player. I don't know how to describe him better than smooth.

View from the outside

As a Hawkeye fan I think you guys look outstanding right now. Another quality win.

Jumping out of the gym

Davis most athletic guy in building, Hepburn is an amazing defender. Great to beat MU!

This team is so fun to watch…because you can tell that they are having fun!

Their Defense is for real. Only going to keep getting better.

We knew Johnny Davis was a star, Wahl a great defender and capable post scorer, and Brad was a great leader who could step up when needed. What we saw in this was how good we can be when Chucky and Crowl play up to their potential.

Photos: Wisconsin Badgers cruise past Marquette Golden Eagles in battle of I-94 rivals

Johnny Davis isn’t participating in drills or scrimmages at the NBA draft combine. But scouts were willing to share their thoughts on the former Wisconsin men’s basketball star.

‘Everything I do is for them’: Former Wisconsin star Johnny Davis’ main motivation is family

Johnny Davis is five weeks away from reaching a dream he set as a child — getting drafted in the NBA. He reflects on his main motivation — family — as he gets closer to the draft.

A player with ties to the state announced his commitment to the Wisconsin men’s basketball team Tuesday.

Ross Candelino is a 6-foot-5 shooting guard from Jacksonville, Florida, who averaged 14.2 points per game in his senior season. He plans to join the Badgers men's basketball team next season.

Shooting guard Max Klesmit grew up a Badgers fan, but he has more aspirations than just wearing white and red now that he’s signed to play with the men’s basketball team.

Open Jim: Will the Green Bay Packers use one of their first-round picks on a wide receiver?

Watch now: Johnny Davis says NBA combine is ‘exciting’ despite being told not to scrimmage

Watch now: Johnny Davis says NBA combine is ‘exciting’ despite being told not to scrimmage 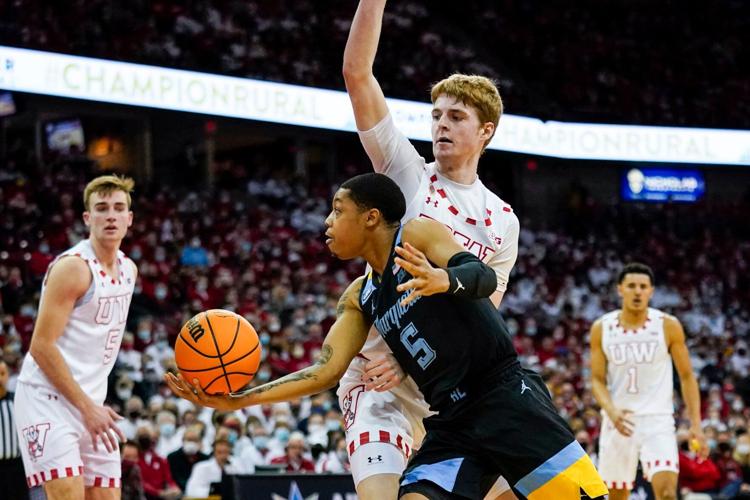 UW's Steven Crowl defends Marquette's Greg Elliott during the first half Saturday at the Kohl Center. Crowl scored 15 points on 6-for-9 shooting and had eight rebounds.