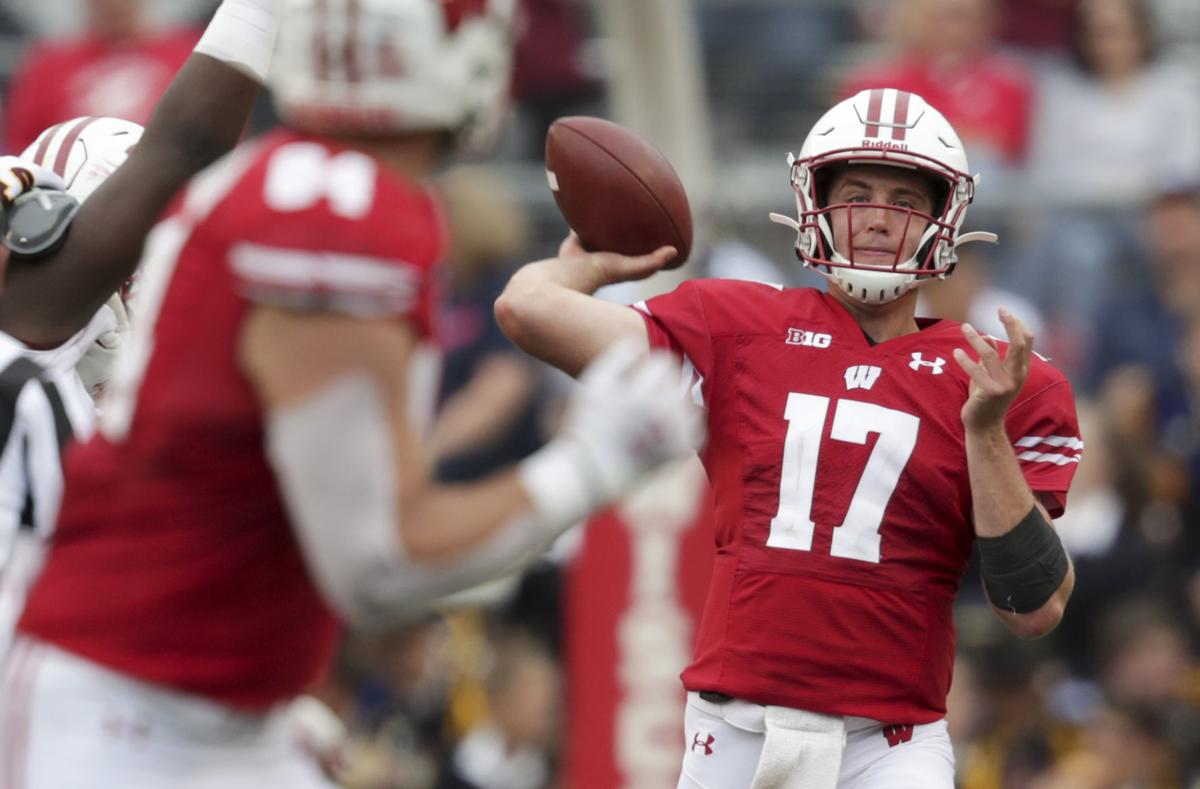 UW quarterback Jack Coan has passed for 564 yards and five touchdowns in two games this season. 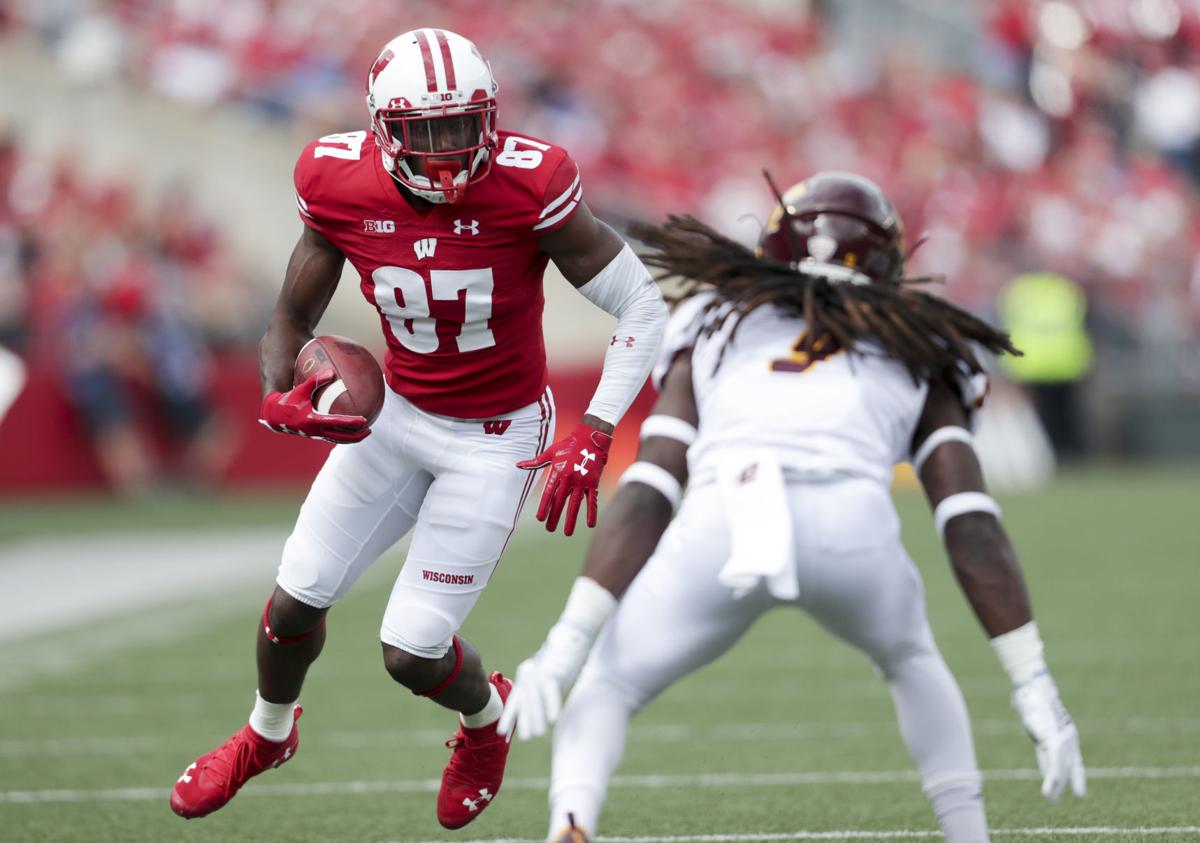 Quintez Cephus leads the Badgers with nine receptions for 169 yards through two games.

The University of Wisconsin football team’s passing attack has been both efficient and explosive through the first two weeks of the 2019 season.

But the No. 13 Badgers got a reminder during the bye week of a time when air travel was much more turbulent. All it took was watching video of last season’s game against Michigan, which visits Camp Randall Stadium on Saturday for both teams’ Big Ten Conference opener.

UW is coming off a 61-0 win over Central Michigan in which it finished with 400 passing yards, the third-highest mark in program history. That outing, combined with a 49-0 win over South Florida in the opener, gave junior quarterback Jack Coan more passing yards through two games (564) than he had in five games (515) last season.

What to make of those dazzling numbers — Are they real or the product of poor competition? — is a legitimate question. An answer could come as early as Saturday, considering No. 11 Michigan (2-0) figures to have one of the top defenses in the country once again this season and has made UW (2-0) one-dimensional in each of the teams’ matchups the previous three seasons.

Re-watching Michigan’s 38-13 win in Ann Arbor last October would fall under the horror film genre for coach Paul Chryst and the Badgers, who went nearly three full quarters of action without a completion at one point.

UW finished the game 7 of 20 through the air, its lowest completion percentage (35) in the 148 games Chryst has been either the program’s offensive coordinator or head coach.

“I think when you look back at that one, or any game like that, it’s execution — or failure to execute,” Chryst said Monday. “I think you could take a look at every one of those snaps and it’s two-part, it’s what can you do to better execute or when you did have success, how you did execute? And then obviously, there’s an opponent or another factor in it that you don’t have control over: It’s a good defense. They will challenge you in a number of ways and you’ve got to be able to handle it.”

Review the University of Wisconsin 2019 football season, with players to watch and Big 10 stats comparison. Test your Badgers knowledge with the jersey number quiz!

Some of the faces have changed, obviously. Four members of that Michigan defense were selected in the opening three rounds of the NFL draft, including Green Bay Packers first-round pick Rashan Gary.

But the Wolverines still have plenty of talent. Among the returnees are two players who had interceptions vs. UW last season — cornerback Lavert Hill and safety Josh Metellus.

One big change on UW’s side is Coan now starting instead of Alex Hornibrook, who transferred to Florida State in the offseason. Hornibrook had 12 consecutive incompletions against the Wolverines at one point, going from the 1:53 mark in the first quarter until the 4:48 mark of the fourth quarter without completing a single pass. UW was stuck on 25 passing yards until Hornibrook completed a heave downfield to tight end Jake Ferguson long after the game had been decided.

As easy as it was to point fingers at Hornibrook for that awful passing display, there was plenty of blame to go around. He was under heavy pressure at times and often was left with zero options downfield because Michigan players were glued to UW receivers.

“It takes all 11 for things to work,” UW junior wide receiver Kendric Pryor. “Our focus is on being a complete offense.”

That’s been easier to accomplish this season now that junior wide receiver Quintez Cephus is back in the fold. Cephus missed the entire 2018 season due to a suspension and acknowledged Monday the Michigan game was hard to watch from afar because he knew there was nothing he could do to help.

Cephus leads the Badgers with nine receptions for 169 yards through two games in 2019. He’s been on the receiving end of two of Coan’s five touchdown passes.

“They were physical and they were really getting to the ball,” Cephus said of what the Michigan secondary did against UW last season. “We just have to be strong and be really aggressive and explosive and kind of play downhill and fast. I think that’s my approach to the game is to come out and be as physical as I can be, as strong as fast as I can and try to win the one-on-one matchups.”

Cephus hauled in 36- and 46-yard touchdown receptions against Central Michigan, but most of UW’s damage through the air has come on short passes.

“I’ve definitely felt in a rhythm,” said Coan, who had a run of 11 consecutive completions against South Florida and streaks of eight and six against Central Michigan. “It’s good to just come out and get a few completions right away. I feel like that helps me a little bit.”

Now comes Coan’s biggest challenge to date. UW’s air attack hasn’t gotten off the ground in its past three meetings with Michigan, with Hornibrook going 9 of 25, 9 of 19 and 7 of 20 in those games. The high-water mark in terms of passing yards was 143 in the 2017 game at Camp Randall, and Michigan held UW to 88 passing yards the previous season.

For the most part, Coan has been blessed with great protection and open receivers through the opening two games. If recent history suggests anything, he should expect some bumpy air when the Wolverines arrive in town.

“It’s going to be close coverage, we’re going to have to make some tight catches,” Pryor said. “We’re getting ready for that.”

Video: Are the Badgers the best team in the Big Ten?

Video: Is Michigan in for a long day at Camp Randall on Saturday?

UW quarterback Jack Coan has passed for 564 yards and five touchdowns in two games this season.

Quintez Cephus leads the Badgers with nine receptions for 169 yards through two games.