Makenna Webster hasn’t been too upset about missing out on one element of the typical college experience in her freshman year with the University of Wisconsin women’s hockey team.

What’s to love about walking to class in the cold, anyway?

This has been a season drastically different from any in the past because of the COVID-19 pandemic. Yet while Webster and her fellow freshmen have missed out on playing in front of sold-out LaBahn Arena crowds in their first season, they still are getting one big part of the UW experience.

The Badgers are in the mix for trophies as the end of the regular season approaches.

The first can be secured as early as Friday when top-ranked UW opens its final Western Collegiate Hockey Association series at No. 7 Minnesota Duluth. A regulation, overtime or shootout victory either Friday or Saturday or a pair of overtime or shootout losses would be enough to wrap up the Badgers’ fourth WCHA crown in five seasons.

When freshmen arrive with the Badgers, they quickly find out the season is built around the team accelerating to this point, when the games take on higher values.

“Just learning from the older girls and learning from our captains, I think they’ve shown us the culture here at Wisconsin,” Webster said. “They just pass it down to us. They’re showing us how badly they want to win.

“I think every one of the freshmen look up to them. We want to do it not just for the team but for the captains who are going to be leaving us.”

Webster scored a goal in both games against Bemidji State two weeks ago before the Badgers had off last weekend. That was a confidence boost, she said, after a season where the points haven’t been easy to come by.

She had 39 goals and 84 points in 50 games last season at Shattuck-St. Mary’s prep school in Minnesota. But this season has been different, starting with the vastly decreased number of games.

The pandemic delayed the start, and UW had six games wiped out because of positive COVID-19 tests. It has been a challenging road for everyone, but coach Mark Johnson said his team’s six freshmen have been especially impacted.

In a normal season, 14 games would be near the midpoint and a time for reflection and planning for the second half, he said. It instead is time for the elevated stakes of the postseason.

“Our freshmen are no different than other freshmen around the country,” Johnson said. “I’m sure their expectations were really high coming into their respective universities. Then you had to practice for a long period of time. A lot of our freshmen had COVID. They were out for two or three weeks, weren’t on the ice for long stretches. Then you’ve got to come back, get yourself back into shape. They’re doing classes a little bit different, so there’s a lot of things that are thrown at them.”

Webster and the other freshmen have heard Johnson tell them to trust the process of developing into college players. Webster eventually wants to be in a role where she can bring energy in all situations and deliver scoring punch.

Right now, however, the process is about becoming more dependable in all areas on the ice, Johnson said.

COVID-19 forced Lacey Eden to change colleges if she wanted to play hockey. The Badgers are reaping the reward

“They practice hard. They’re competitive,” he said about the UW freshmen. “So the next step is to give it time. And obviously we’d all like to have 15 or 20 more games, but we don’t have it. Now it comes down to these meaningful games up in Duluth this weekend. We’ll see how they react and take it from there.”

From there, it’s the WCHA Final Faceoff then the NCAA tournament. Among freshmen, Webster and fellow Shattuck product Casey O’Brien have been in the lineup every game; Maddi Wheeler missed one outing.

They’ve faced a ranked team in more than half of their games so the intensity should be getting familiar. That’s part of the process they’re trying to trust.

“It’s hard playing the first-, second-, third-best team every other weekend,” Webster said. “It’s hard for us freshmen just jumping right out there. We haven’t been able to have a normal year.

Read stories from University of Wisconsin women's hockey games in the 2020-21 season.

It was the 11th multiple-goal game with the Badgers for Sophie Shirley but just the first for her younger sister.

Kennedy Blair made 12 saves for her fourth shutout of the season, and four players scored goals in the University of Wisconsin women’s hockey team’s 4-0 victory against Bemidji State at LaBahn Arena.

A day after No. 1 UW rallied for an overtime victory, No. 2 Minnesota earned a split of six points in the series by fighting back for a 2-2 tie and a shootout win.

Daryl Watts' NCAA-leading 13th goal of the season and second of the game on a 3-on-1 rush finished off a comeback from a two-goal deficit in the third period.

A day after winning 10-0, the Badgers didn't lead Saturday until the final two minutes.

The Badgers have won 26 straight games against the Huskies.

Third-period goals by Daryl Watts, Brette Pettet give No. 2 Badgers sweep of No. 1 Minnesota

The Badgers broke out of a scoring funk with an unprecedented offensive showing against their archrivals.

Five players scored and Kennedy Blair made 30 saves as the Badgers erased some of the bad taste from last week's split with Ohio State.

Left chasing for most of the game, No. 1 Badgers fall in overtime to No. 4 Ohio State

Coach Mark Johnson said the Badgers "didn't do a very good job with the puck" in losing to the Buckeyes.

Daryl Watts and Nicole LaMantia score in the final period, and UW gets 28 saves from Kennedy Blair.

Badgers goalie Kennedy Blair made 11 of her 21 saves in the third period as she shut out an opponent for the second time in four games this season.

Daryl Watts scored on the power play with 3:15 remaining as the top-ranked Badgers defeated Minnesota State.

Sloppiness in the defensive zone led to the Badgers falling behind, coach Mark Johnson said.

Gabbie Hughes scored twice for the seventh-ranked Bulldogs, who can pass the Badgers for the crown with another victory Saturday.

The Badgers won their fifth WCHA regular-season title in the last six years with a frantic finish at Minnesota Duluth.

Minnesota twice pulls within one goal in the third period, but UW holds on in the WCHA Final Faceoff semifinals.

Badgers get transfers from Minnesota and Bowling Green, lose senior to pros

Goaltender Jared Moe and center Max Johnson are due to join the Badgers but left wing Linus Weissbach won't return for a bonus season of eligibility.

Emberson signed after three seasons as a physical defenseman with the Badgers.

The departure of top-line players and the potential for more leaving means goal-scoring will have to come a different way, coach Tony Granato says. 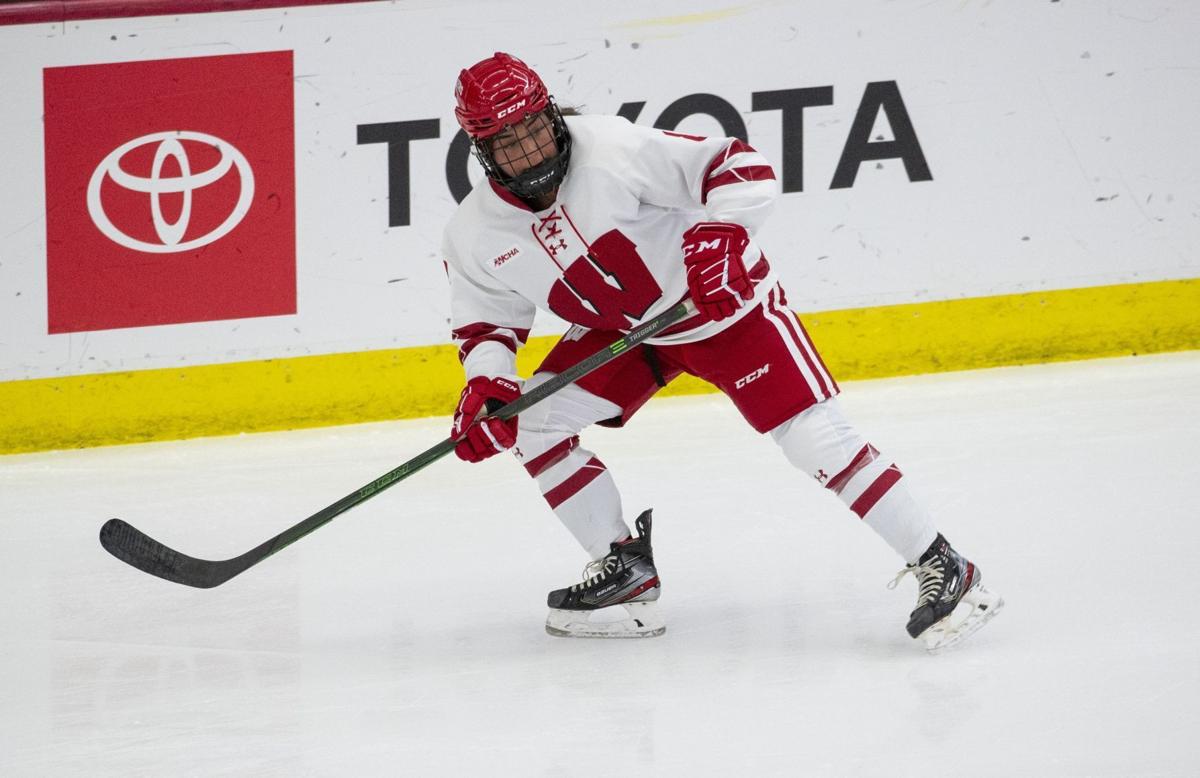 Freshman forward Makenna Webster has four goals and seven points in 14 games for the Badgers, who play at Minnesota Duluth on Friday and Saturday. 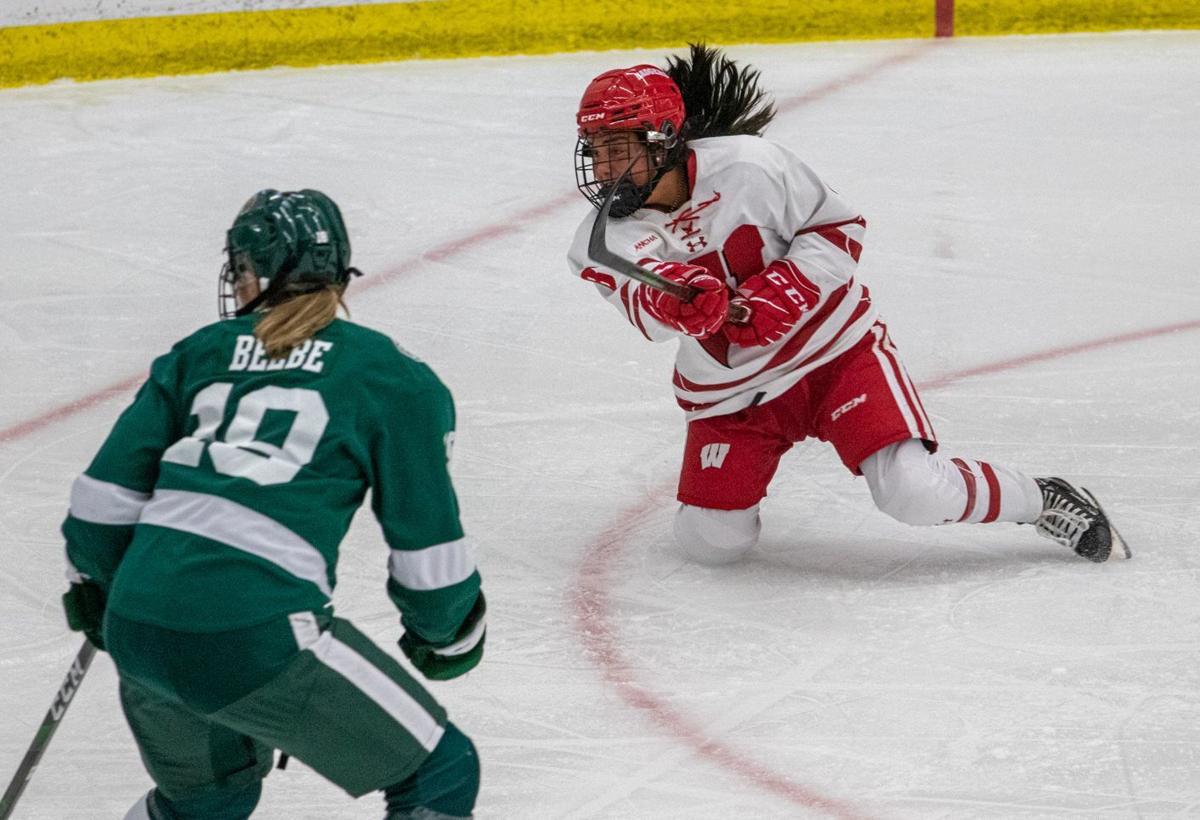 Freshman Makenna Webster scored in both games against Bemidji State on Feb. 12 and 13. 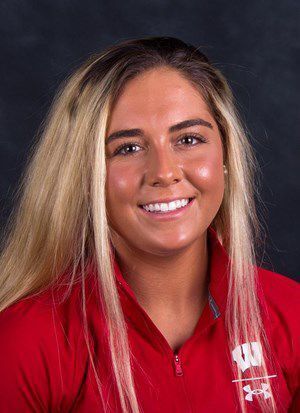