FILE - New York Jets quarterback Zach Wilson passes during the first half of an NFL football game against the Tennessee Titans, Sunday, Oct. 3, 2021, in East Rutherford. Zach Wilson will return as the New York Jets' starting quarterback Sunday, Nov. 28, 2021 against the Texans in Houston, according to a person with direct knowledge of the decision. 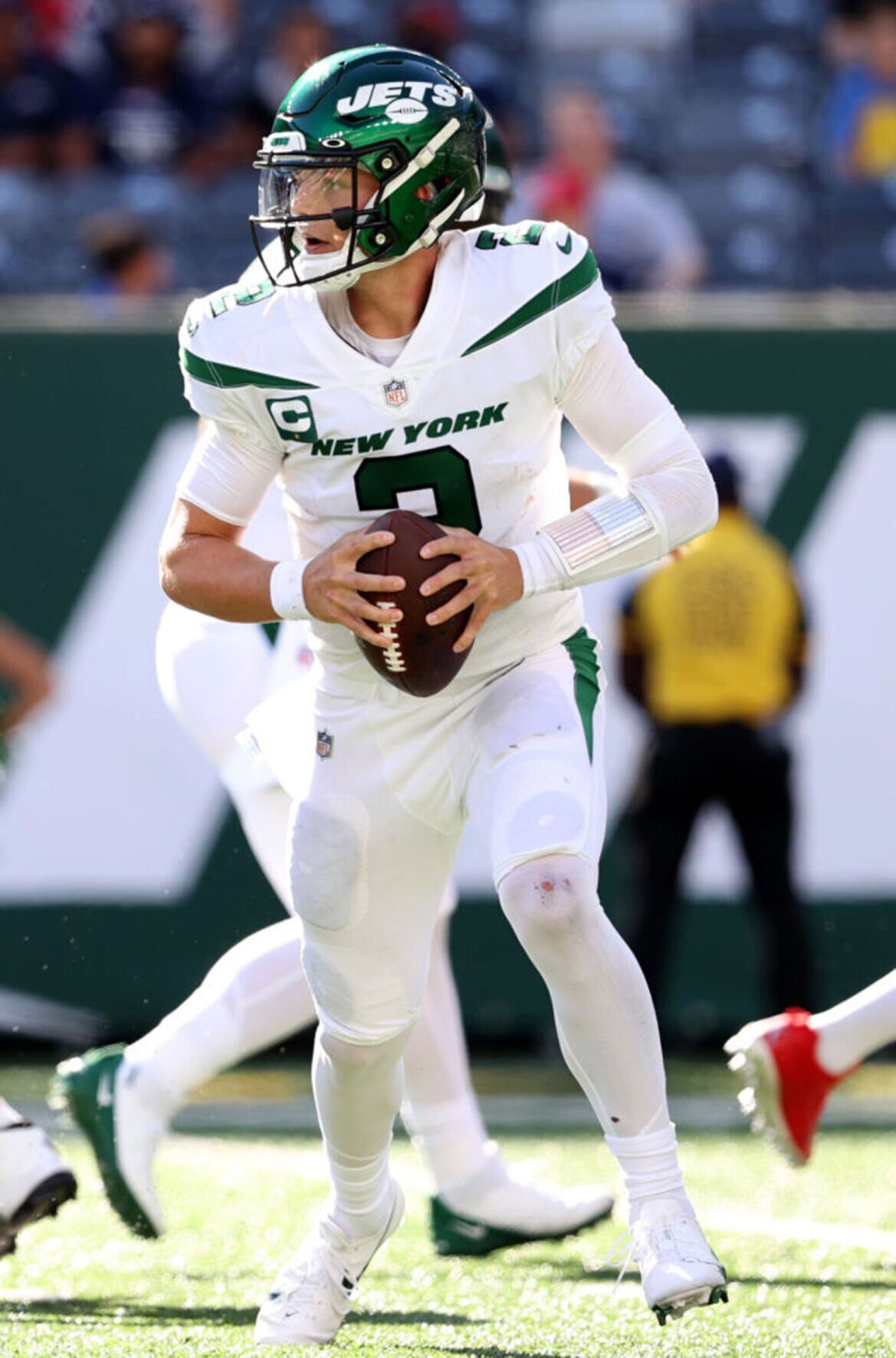 Quarterback Zach Wilson #2 of the New York Jets scrambles with the ball during the fourth quarter against the New England Patriots at MetLife Stadium on September 19, 2021 in East Rutherford, New Jersey. (Elsa/Getty Images/TNS)

NEW YORK — After missing the last four games, Zach Wilson will be back under center for the Jets against the Texans, per sources. Quarterbacks Joe Flacco and Mike White went on the COVID-19 list Tuesday.

Wilson suffered a sprained PCL against the Patriots and missed four games. He was replaced by White, who did a decent job.

White played well enough to give pause on who would start once Wilson was healthy. White threw five touchdowns in his first eight quarters with a 405-yard performance against the Bengals in an upset win.

But White struggled tremendously against the Bills, as he tossed four interceptions and the Jets got flatlined, 45-17.

Then the Jets started Flacco, who they traded for on Oct. 25, against the Miami Dolphins in Week 11. Saleh believed Flacco would be better equipped to handle the Dolphins' high blitzing scheme.

Flacco proved Saleh right, as he went 12 for 19 for 168 yards and two touchdowns against the blitz.

Wilson could have returned against the Bills. But Saleh didn’t want to rush Wilson back when he started practicing two weeks ago.

“We’re going to do everything to make sure we protect this young man,” Saleh said on Monday. “So, when he is fully healthy and he feels like there’s no limitations in his ability to play football and he’s not thinking about that knee, we’ll get him out there. But he’s got to be 100 percent healthy before we get him out on the football field.”

Talent was never the issue with the former BYU star. But Gang Green believes that sitting on the sidelines had a positive effect on the No. 2 overall pick, improving his mental acumen as he watched.

They hope he learned how to run the offense better and cut down on the mistakes that popped up often in his five starts. He had 1,168 yards with four touchdowns and nine interceptions with a passer rating of 63.5, all ranked towards the bottom of the league.

But no need to panic. Those are typical rookie struggles.

Some of Wilson’s struggles stem from adjusting to the speed of NFL defenses and altering his play style. He is a gunslinger who was learning when to take shots and that got him into trouble at times. He held the ball the longest among quarterbacks at 3.10 seconds on average.

When Wilson held the ball longer than 2.5 seconds, he had three touchdowns and nine interceptions with a passer rating of 50. Some of that was to push the ball down the field, which is why his intended air yards per attempt was 8.8, seventh most according to Next Gen Stats. There were times when he could have thrown to the checkdown, but instead looked for the big play.

That’s where White and Wilson differed. White played within the offensive structure on a more consistent basis. When the first read wasn’t there, he would hit his checkdown; that’s why receiving production from running backs Michael Carter and Ty Johnson increased. Similarly, White’s intended air yards per attempt was a more modest 6.2.

Wilson did begin his career against stiff competition.

In four of his six starts, he faced top-six scoring defenses in the Panthers, Patriots (twice) and Broncos. In the next seven games, Wilson will face only one top-10 scoring defense in the Saints.

Wilson’s numbers should be much better than they were in the beginning of the season.

The biggest draft bust of all time for each NFL team

The Rams have changed the look of their team quite a bit since their last visit to Lambeau Field. They're about to get a good idea how far they've come since.

Aaron Rodgers has a fractured pinkie toe — not “COVID Toe,” a malady associated with COVID-19 that causes red and purple lesions on the feet of sufferers who’ve tested positive for the novel coronavirus, as Rodgers did on Nov. 3.

Against the Rams' fearsome pass rush, Yosh Nijman will need to play even better than he did during a three-game stint earlier in the season.

Broncos setting themselves up for run at Aaron Rodgers in offseason?

George Paton swears that committing $90 million to wide receivers Courtland Sutton and Tim Patrick over the weekend wasn't about making Denver an attractive landing pad for a veteran quarterback in 2022.

Vacation, all they ever wanted? Not yet — as Packers coaches have self-scouting to do, first

After a 12-week grind resulted in a 9-3 start, head coach Matt LaFleur and his staff will be at the team’s Lambeau Field headquarters during the bye week breaking down the team they know best: Their own.

Here's a look at 10 clubs, in no particular order, who have the best chance to be in Los Angeles for Super Bowl 56.

Jim Polzin: Packers positioned for regular-season success after grinding out a victory over the Rams

Matt LaFleur’s team all but secured the North division while putting itself in great shape in the race for a No. 1 seed in the NFC with an effort that, while far from perfect, was more than enough to send them into their off week on a happy note.

Columnist Jim Polzin grades the Green Bay Packers' performance in their 36-28 victory over the Los Angeles Rams at Lambeau Field.

The Rams came from Hollywood to Titletown as the alleged epitome of a team going “all-in” but Green Bay took care of business and sent them packing with a 36-28 victory at Lambeau Field.

Matt Stafford threw a pick-6 and had a fumble that led to a Green Bay touchdown Sunday as the Rams fell 36-28 to the Packers for their third consecutive loss.

FILE - New York Jets quarterback Zach Wilson passes during the first half of an NFL football game against the Tennessee Titans, Sunday, Oct. 3, 2021, in East Rutherford. Zach Wilson will return as the New York Jets' starting quarterback Sunday, Nov. 28, 2021 against the Texans in Houston, according to a person with direct knowledge of the decision.

Quarterback Zach Wilson #2 of the New York Jets scrambles with the ball during the fourth quarter against the New England Patriots at MetLife Stadium on September 19, 2021 in East Rutherford, New Jersey. (Elsa/Getty Images/TNS)