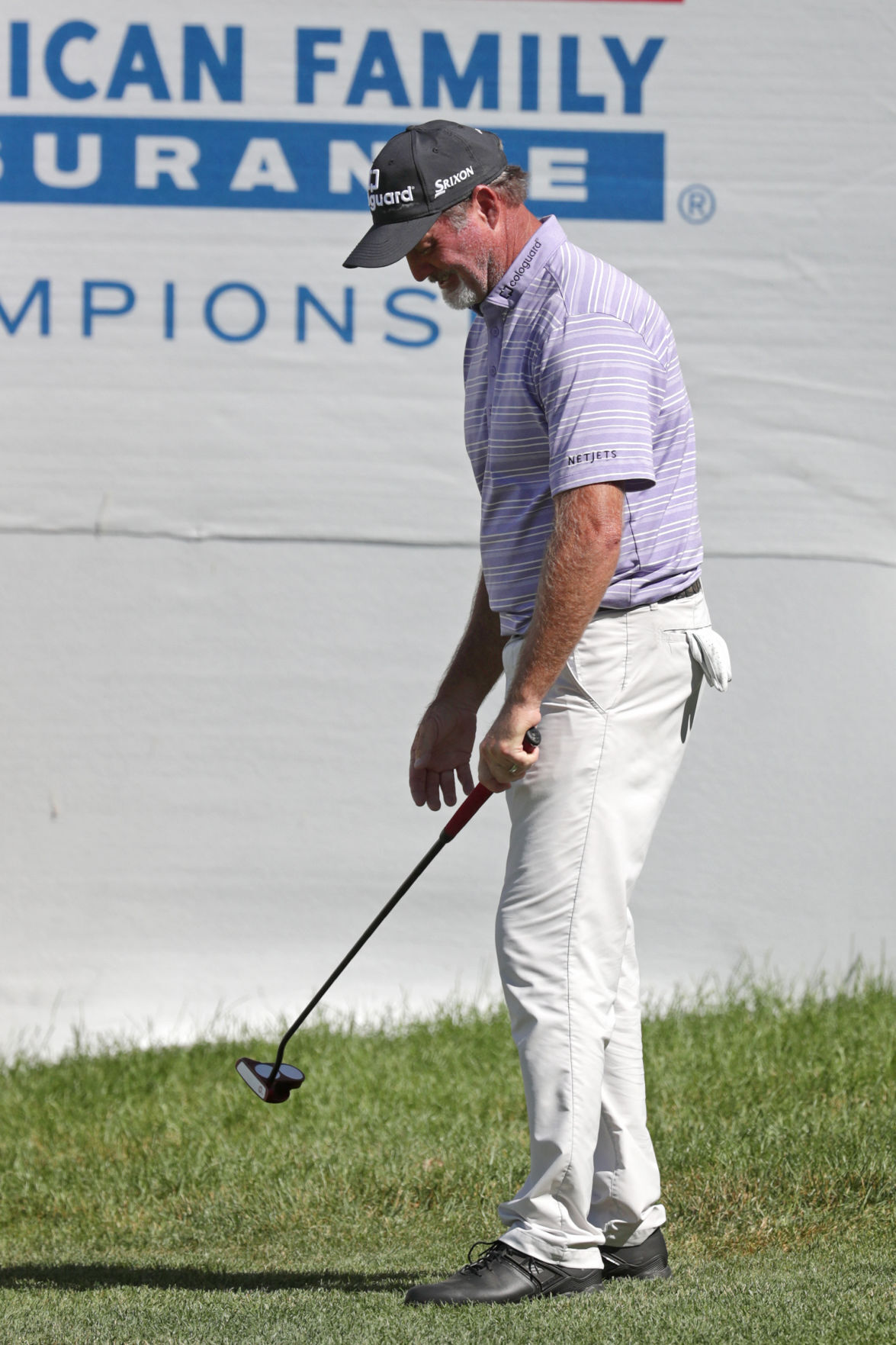 Jerry Kelly shrugs his shoulders after leaving a putt short on No. 18 Saturday at University Ridge. It was his first over-par score on a hole in the first two days. 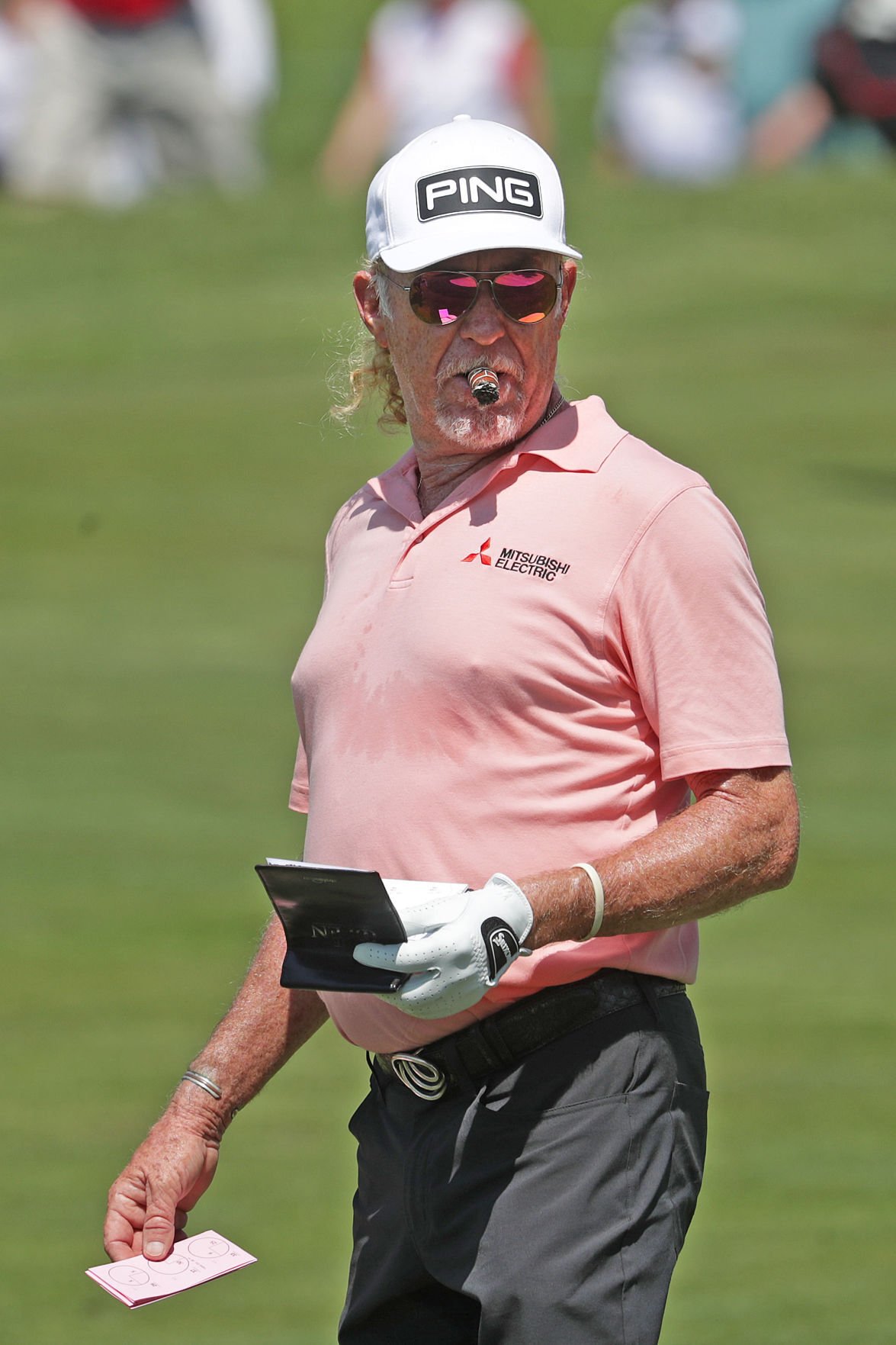 Tournament leader Miguel Angel Jiménez had four birdies and a bogey in the second round. 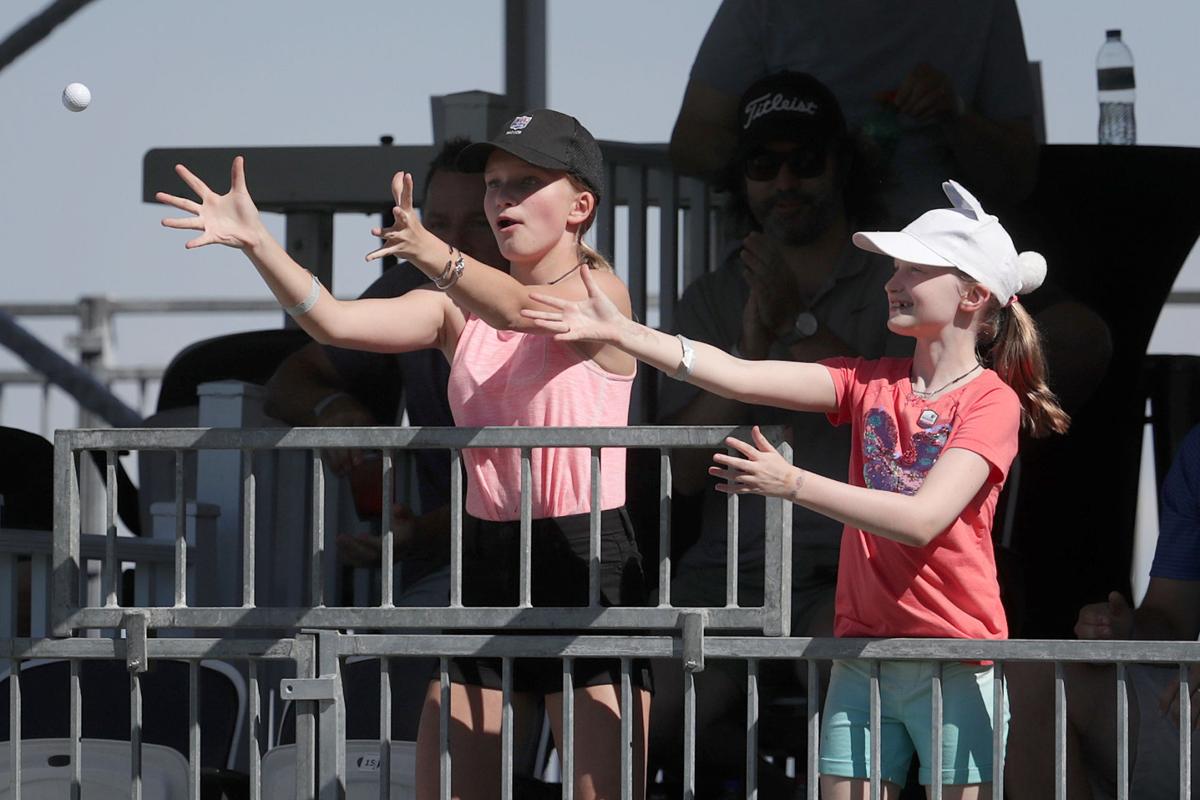 Fans reach for a ball thrown by Jerry Kelly following the completion of his second round.

The first score worse than par to be written on Jerry Kelly’s scorecard this weekend came at an upsetting time.

Co-leading the second round of the American Family Insurance Championship at University Ridge Golf Course, Kelly tried to hook his tee shot on the 18th hole over a bunker hugging the left fairway, but it landed in the sand. His escape shot put him behind, and it took two shots to get on the green. The result was a double bogey and a two-stroke advantage for Miguel Angel Jiménez, whom Kelly battled for the lead throughout the day Saturday.

Jiménez carded a 3-under-par 69 to reach 10-under 134, holding sole possession of the lead after Kelly, who also shot 69, had wrestled it away from him with a flurry of birdies.

“I got caught trying to skirt that bunker and it wasn’t smart,” said Kelly, the PGA Tour Champions event’s defending champion. “Not hitting it good enough to split hairs. I should put it out to the right and hit something longer in, like that’s the way I’ve been playing.”

Kelly’s gaffe has him tied for third with Retief Goosen and Jim Furyk at 8 under. Fred Couples, who also is going for his second AmFam title, sits in second place at 9 under after being one of four players to shoot the round-low of 4-under-67.

Kelly and Jiménez were locked in a tight battle from the first tee, with Kelly recording birdies on the first two holes and Jiménez matching him on the second to keep a one-stroke advantage. They both birdied the sixth, but Kelly drained a 17-foot birdie putt on the eighth to tie for the lead at 9 under.

On the par-5 11th hole, Kelly’s uphill pitch rolled to about 15 feet from the cup, and he snatched the solo lead by sinking the birdie putt. But that’s when Kelly says he “hit the pause button,” something that was an issue Friday as well.

“I didn’t hit it great again today. I was making the most of it again, just not making any big mistakes, and then I made a big mistake,” Kelly said. “It was a bummer to finish on, but I’m the same amount of shots back that I was yesterday.”

He made six consecutive pars on the back nine, missing birdie chances on 14 and 15 by centimeters. Those misses kept the door open for Jiménez, who shook off a bogey at 14 to birdie 15 and 16 and move back into a tie with Kelly.

“The only thing you need to do is keep the focus,” Jiménez said of how he bounced back. “And then the next hole, hit a beautiful driver, another position I want, make a beautiful shot, put the ball just 5 feet (away) for birdie.”

Kelly won’t be in the same group as Jiménez again Sunday — Jiménez will be in the final group with Couples and Goosen, while Kelly will join Furyk and Jay Haas in the penultimate group. Kelly said he wishes he could be right there to put the pressure on Jiménez, and Jiménez knows he’ll have to be sharp to hold off the group at the top of the leaderboard.

“Tomorrow, probably the most important club is going to be the club No. 15, this one,” Jiménez said pointing to his head.

While Kelly and Jiménez’s battle lit up the front nine, Furyk — the third member of that group — kept pace by going 2 under on the front nine. He caught fire, especially with his putter, after the turn and birdied 11, 13 and 14.

His only blemish on the way in was a bogey on the par-3 17th, where he said he hit his tee shot too far to the right and landed in a greenside bunker.

“I was, I don’t know, four shots behind for a long time and then I kind of started creeping up on the back nine with those three birdies,” Furyk said. “So it was a good day to try to get some position and get ready for Sunday, so it will be a shootout tomorrow with a bunch of guys with a chance to win.”

John Daly puts on a show, but withdraws from AmFam after feeling ill

Couples also tore up the back nine playing in the group ahead of Kelly, Jiménez and Furyk. He birdied Nos. 11, 13, 15 and 17 to pull within one stroke of the lead.

“I will say it doesn’t make you play better, but I saw the guys behind me were playing some pretty darn good golf,” Couples said. “I think at one time they were maybe 9, 9 or 10 under and I was at 6. I made a little roll, caught up to them.”

With another day of hot, dry conditions, players said the course was firm and fast, which allowed drives to take off down the fairway and forced players to be precise on the greens. Some difficult pin locations, like No. 1 being on the front edge and No. 9 being tucked behind a bunker on the back right, added to the challenge.

“You’re not going to go out and shoot 63 or 64 on this course, it’s just too tough,” Couples said. “So if you can wear them out with good shots and making a birdie every now and then, then tomorrow will be a fun day.”

On a sweltering first day of the American Family Insurance Championship,  Miguel Angel Jiménez shot a 7-under-par 65 to take the lead Friday a…

Jerry Kelly shrugs his shoulders after leaving a putt short on No. 18 Saturday at University Ridge. It was his first over-par score on a hole in the first two days.

Tournament leader Miguel Angel Jiménez had four birdies and a bogey in the second round.

Fans reach for a ball thrown by Jerry Kelly following the completion of his second round.