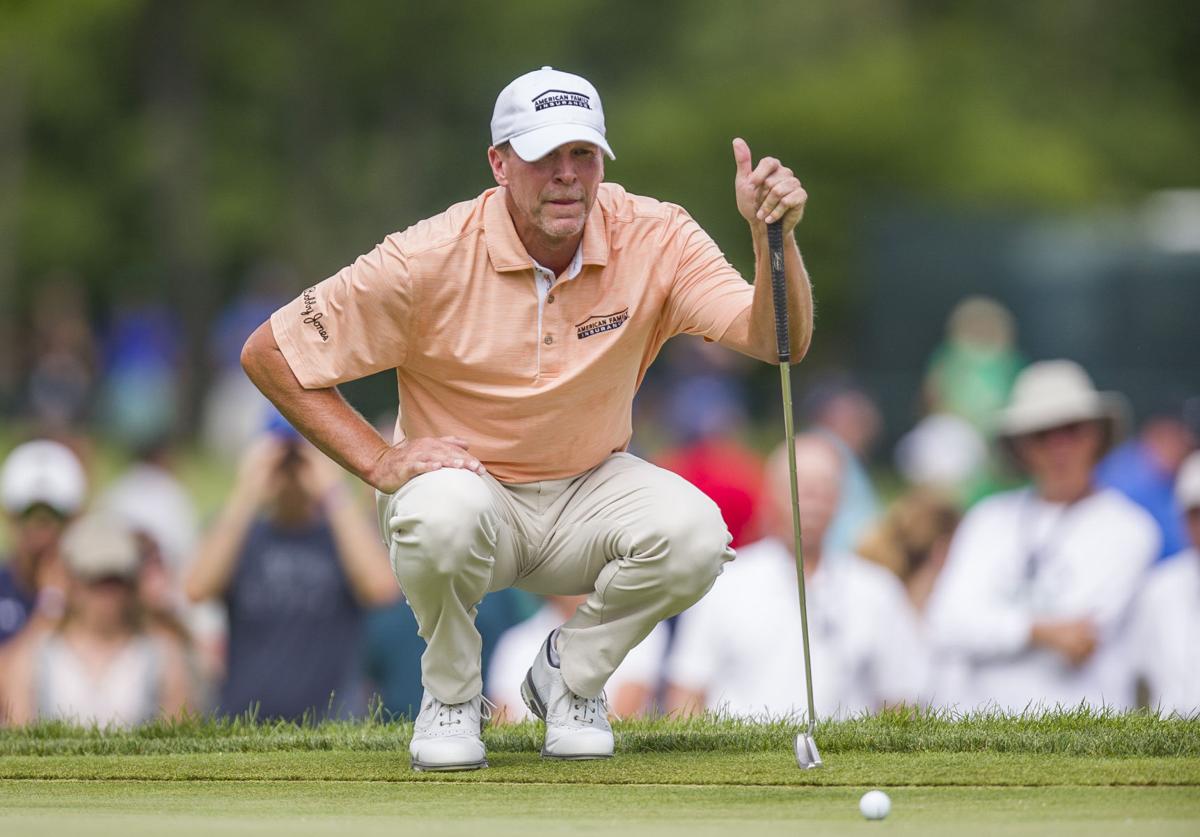 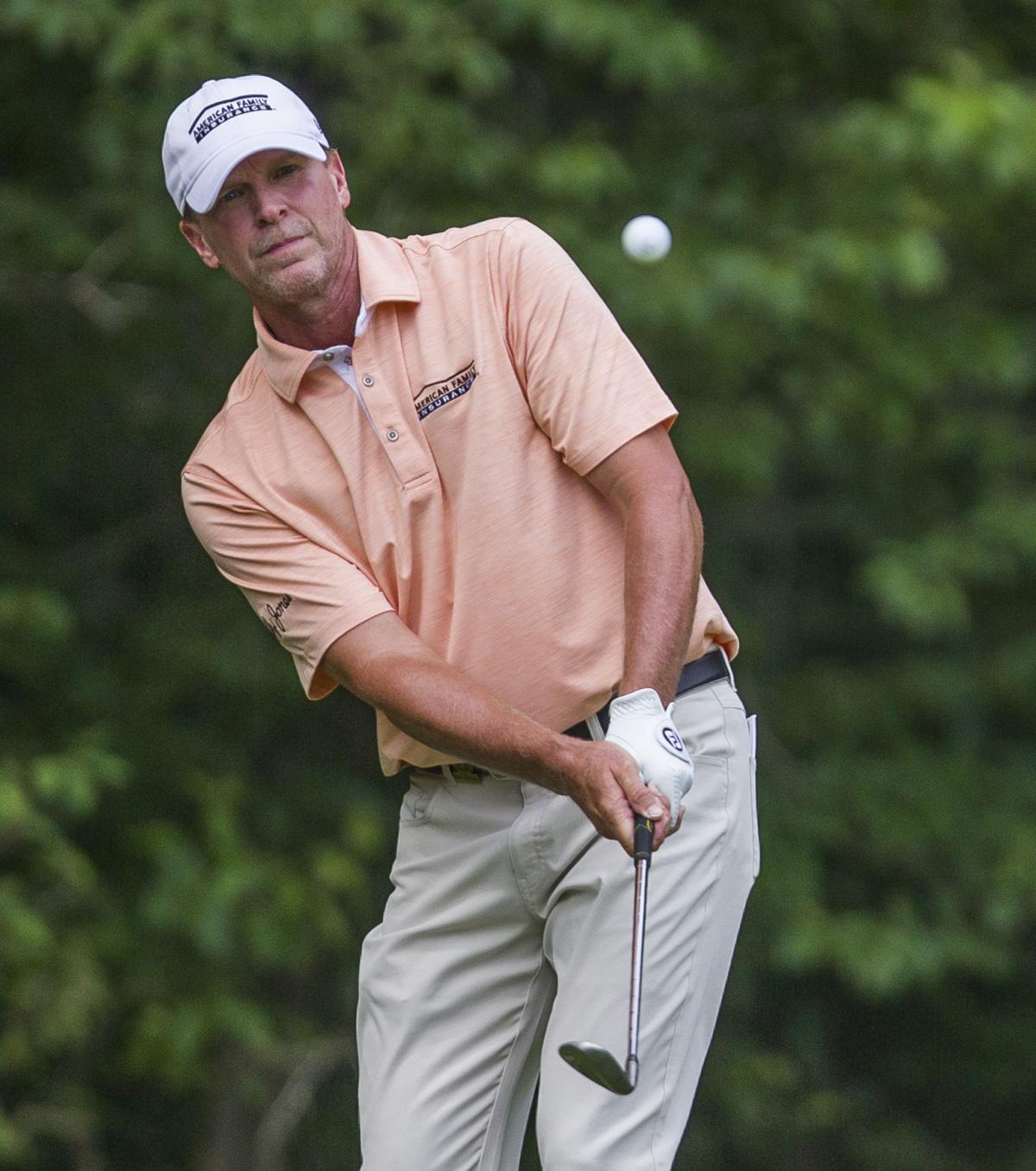 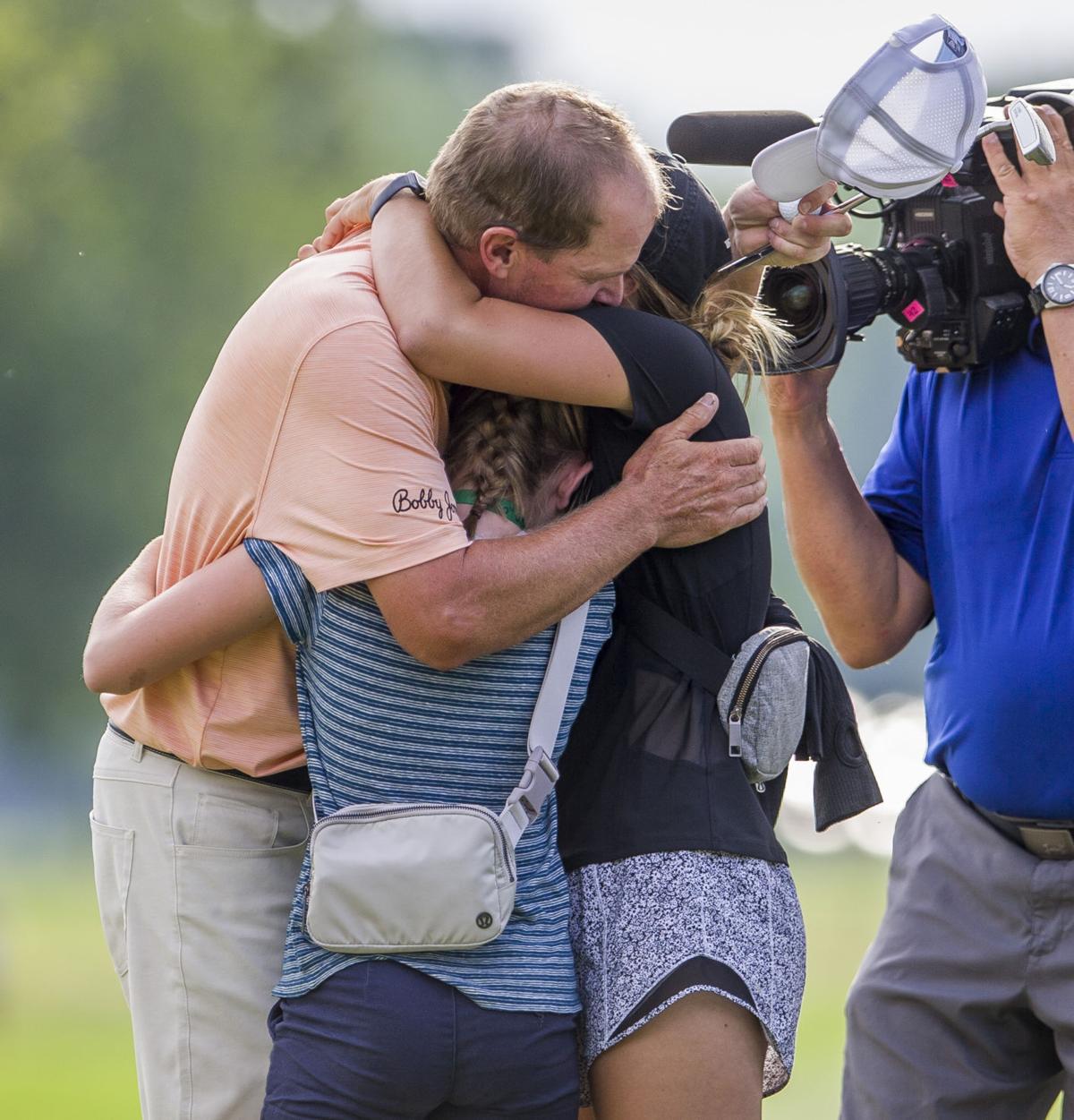 SOUTH BEND, Ind. — Steve Stricker finally has a national golf championship he can call his own as the record-setting winner of the U.S. Senior Open.

“I never was able to win a USGA event in my career, whether it was in the amateur ranks or when I turned pro,” said the Madison resident, who birdied the opening hole and never was threatened on his way to a 1-under 69 and a six-shot victory over Madison’s Jerry Kelly and defending champion David Toms.

“Had some good U.S. Open finishes, but this is it,” Stricker added. “So it’s very special. It’s a great feeling to be able to hold that trophy and to be the Senior Open champion.” 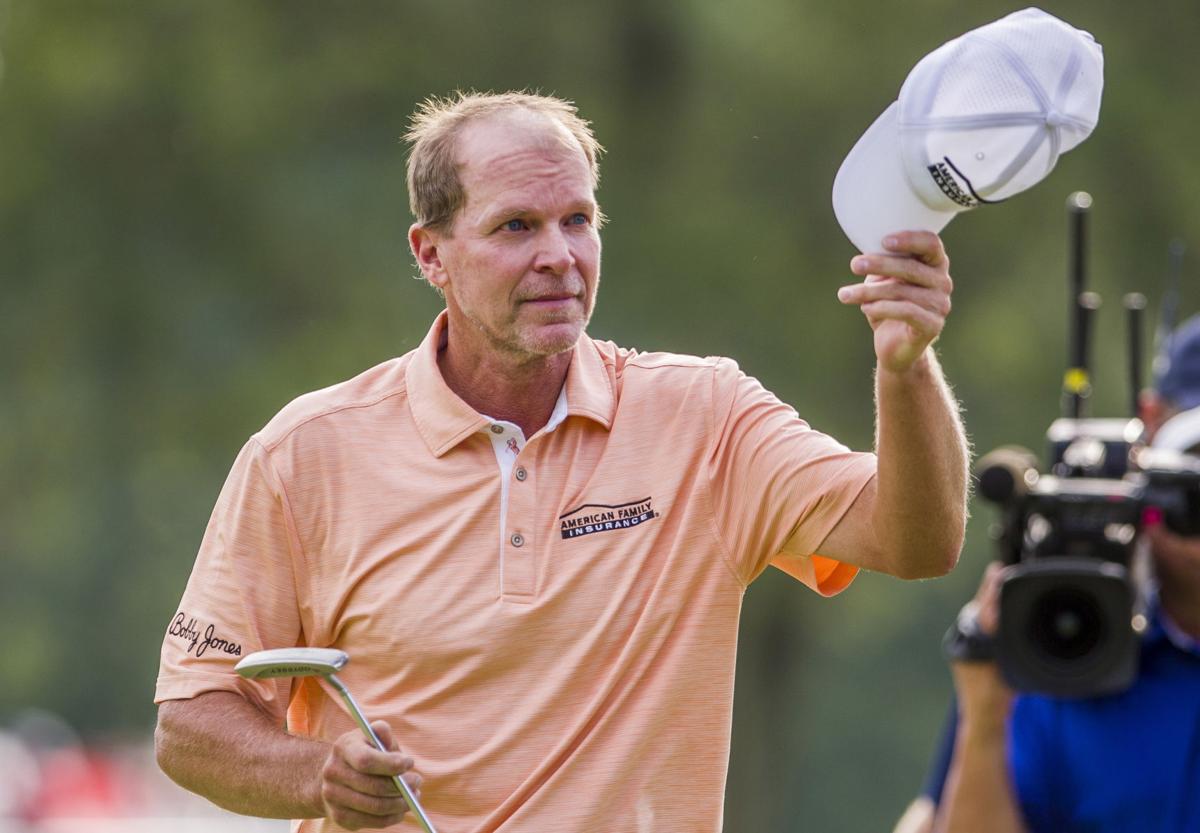 Madison golfer Steve Stricker tips his hat to fans after winning the U.S. Senior Open following the final round of play on Sunday at Notre Dame's Warren Golf Course in South Bend, Ind. 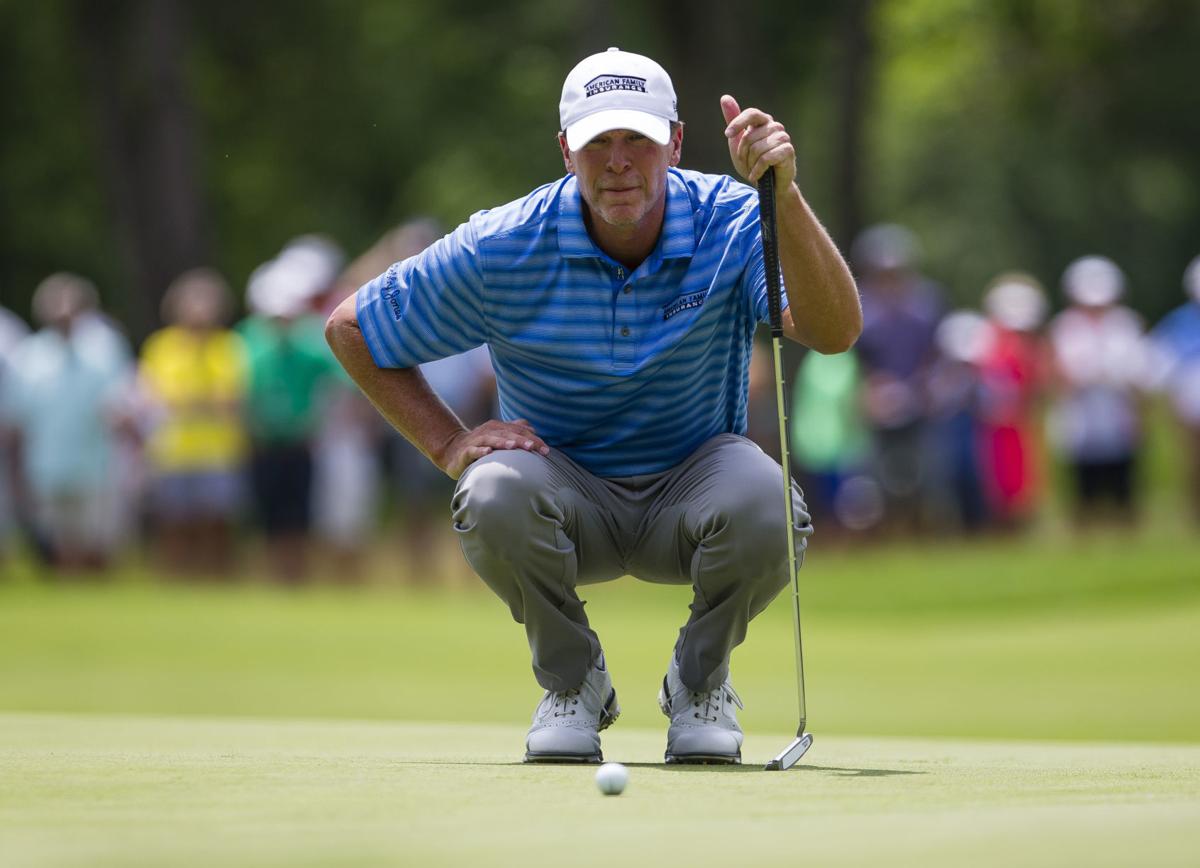 Steve Stricker lines up a putt on the eighth green during the second round of the U.S. Senior Open on Friday in South Bend, Ind. Stricker widened his lead Saturday with a 4-under 66. 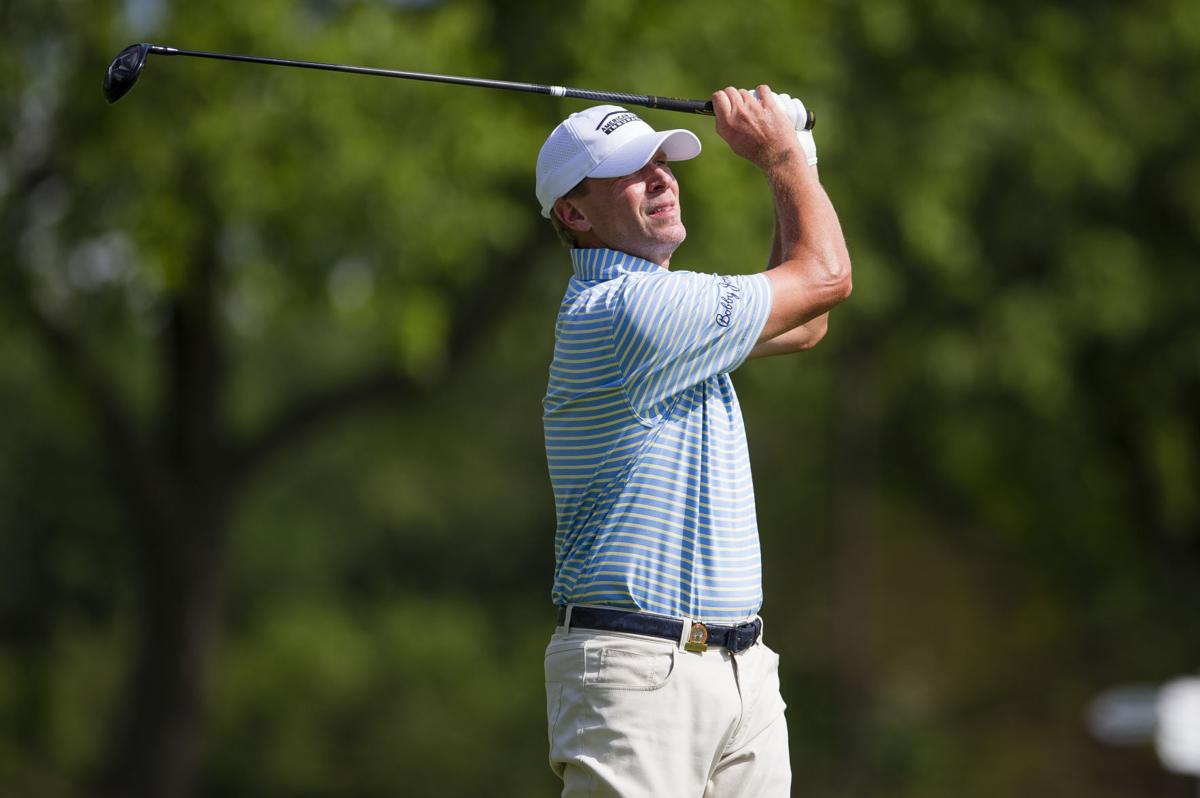 Steve Stricker posted seven birdies and an eagle en route to a record-tying 62 in the first round of the U.S. Senior Open on Thursday.

Stricker finished at 19-under 261 on the Warren Golf Course at Notre Dame, breaking by three shots the U.S. Senior Open record set two years ago by Kenny Perry at Salem Country Club.

The 52-year-old Stricker, who still spends half of his time on the PGA Tour, won a PGA Tour Champions major for the second time this year. He also won the Regions Tradition in May by six strokes. But it was his loss to Kelly in a playoff at the American Family Insurance Championships in Madison last weekend that left him cranky coming to the U.S Senior Open.

“I kind of came here with a little chip on my shoulder from not winning last week,” Stricker said. “I felt like I had something to prove, and I just played some really, really good golf the first three days Today was a little bit shaky at times, but what a great week. Had (his wife) Nicki on the bag. My kids were here. Just a special course, special setup.”

“it was a special moment,” Stricker said. “I told Jerry, I said, ‘It’s awkward, we’re friends, we go back to junior golf.’ I want to beat his brains in out there, and he wants to do the same thing to me. But at the end of it all, we’re friends. I respect him. I love him and his family. So it was hard, especially the last two days.”

Kelly, who knew he had to be aggressive going into the final round, was happy he played better and happy for his friend.

“I hit much better shots,” Kelly said after four birdies and three bogeys. “I was playing much better today, but I couldn’t make anything today. He played steady.”

Toms and Stricker shared the first-round lead with record-tying 62s. Toms couldn’t keep up, and neither could anyone else.

“I felt good about the way I played today,” Toms said. “Like I said, we would have had a really good tournament if it wasn’t for Steve.”

The victory gets Stricker into the U.S. Open next year at Winged Foot, where he tied for sixth in the 2006 U.S. Open, a key moment in resurrecting his career.

Stricker earned $720,000. He shared a kiss with Nicki, hugs with daughters Bobbi Maria and Izzy, and then he choked up with tears during the trophy presentation.

The standard pay for a caddie is 10 percent of the winner’s check.

“She gets whatever she wants,” laughed Stricker, who started the round six strokes ahead of Kelly, and led by at least five shots during the final round.

Kelly only had hope briefly on the par-4 10th hole when he made birdie and Stricker made bogey. It was his first since the sixth hole in the opening round, a streak of 57 holes without a bogey that shattered the U.S. Senior Open record of 43 set by D.A. Weibring in 2004 at Bellerive.

“That was a wakeup call,” Stricker said.

Two holes later, Stricker chipped in for birdie from 46 feet on the par-3 12th and the lead was back to six shots with six to play.

“That chip-in at 12 was huge,” Stricker said. “Nicki and I had been talking that we’ve been looking for a chip-in, and I said right before I chipped it, I said, I’m still looking for that chip-in, and she’s like, ‘I am, too.' So maybe the power of us both thinking about it, it came true.”

Then it was a matter of surviving the final six holes as Warren, softened prior to the tournament by 15 inches of rain, got firmer with warming temperatures and winds and tougher with typical USGA Sunday pin placements. The Warren course surrendered 99 rounds under par over the opening three rounds. Stricker had one of only 14 rounds under par Sunday.

Bob Estes shot 70 and finished fourth at 10-under 270, two shots ahead of Kirk Triplett (69). The lowest round was a 64 by Scott McCarron, who leads the Charles Schwab Cup on the PGA Tour Champions. That brought McCarron from a tie for 46th to a tie for sixth.

Tom Watson finished his 17th U.S. Senior Open at 2-under 278 by closing with a 68. It was the third time this week the 69-year-old Watson shot his age or better. Gary Nicklaus, playing in his first Senior Open after turning 50, finished at 7-over 287 after a 73 watched by his father Jack and mother Barbara.

Coming off a victory two weeks ago in the U.S. Senior Open in South Bend, Indiana, Stricker had a hole-in-one on the 184-yard, par-3 seventh at Firestone Country Club.