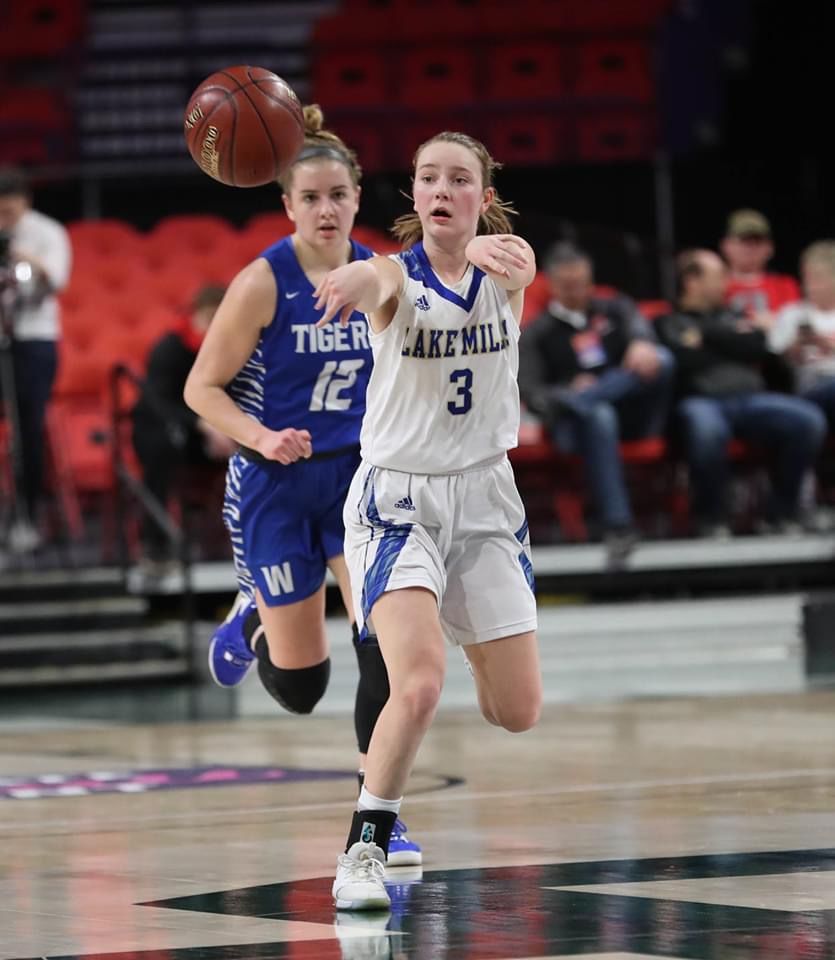 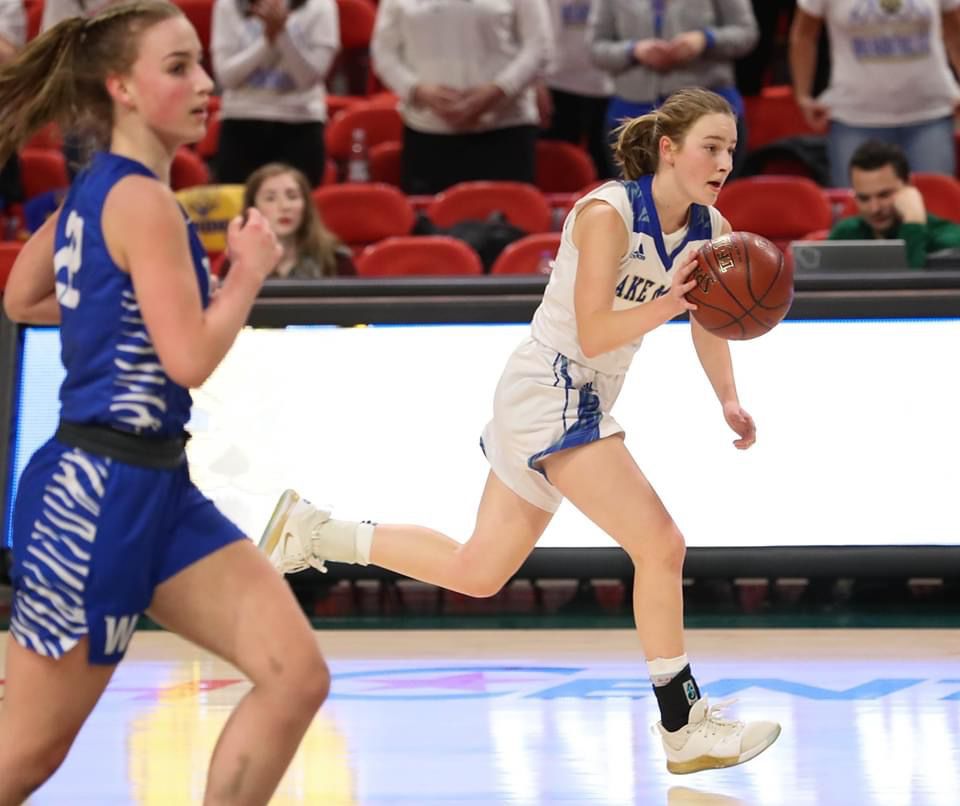 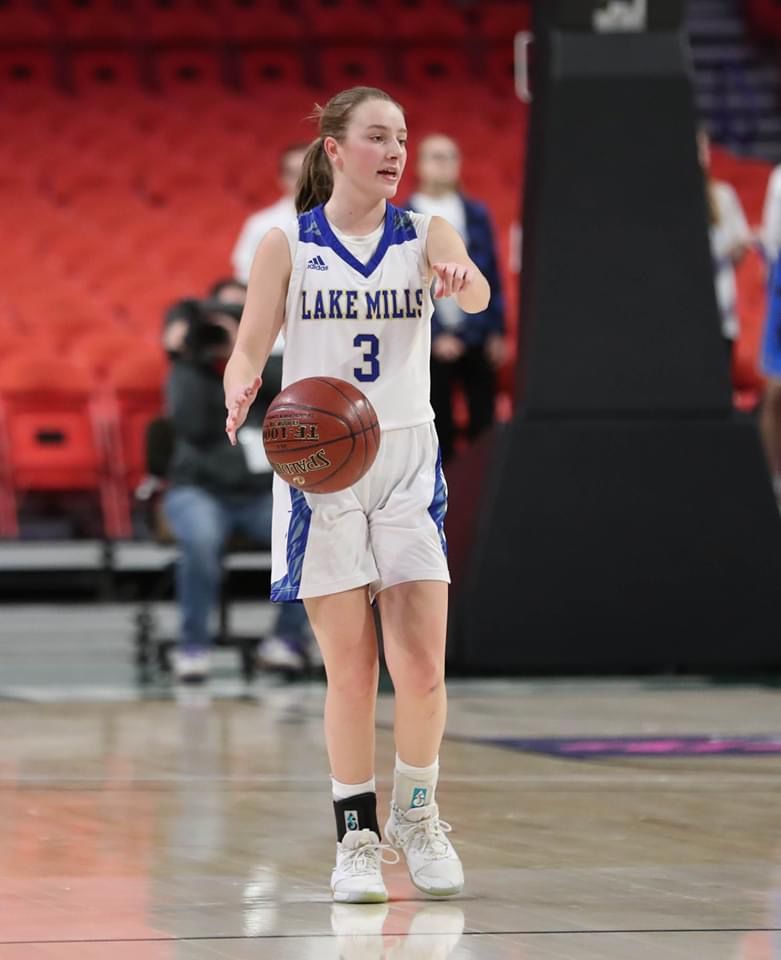 Lake Mills junior guard Julianna Wagner directs the offense during the first half of the L-Cats' Division 3 semifinal against Wrightstown at the WIAA girls basketball state tournament March 12 at the Resch Center in Ashwaubenon. 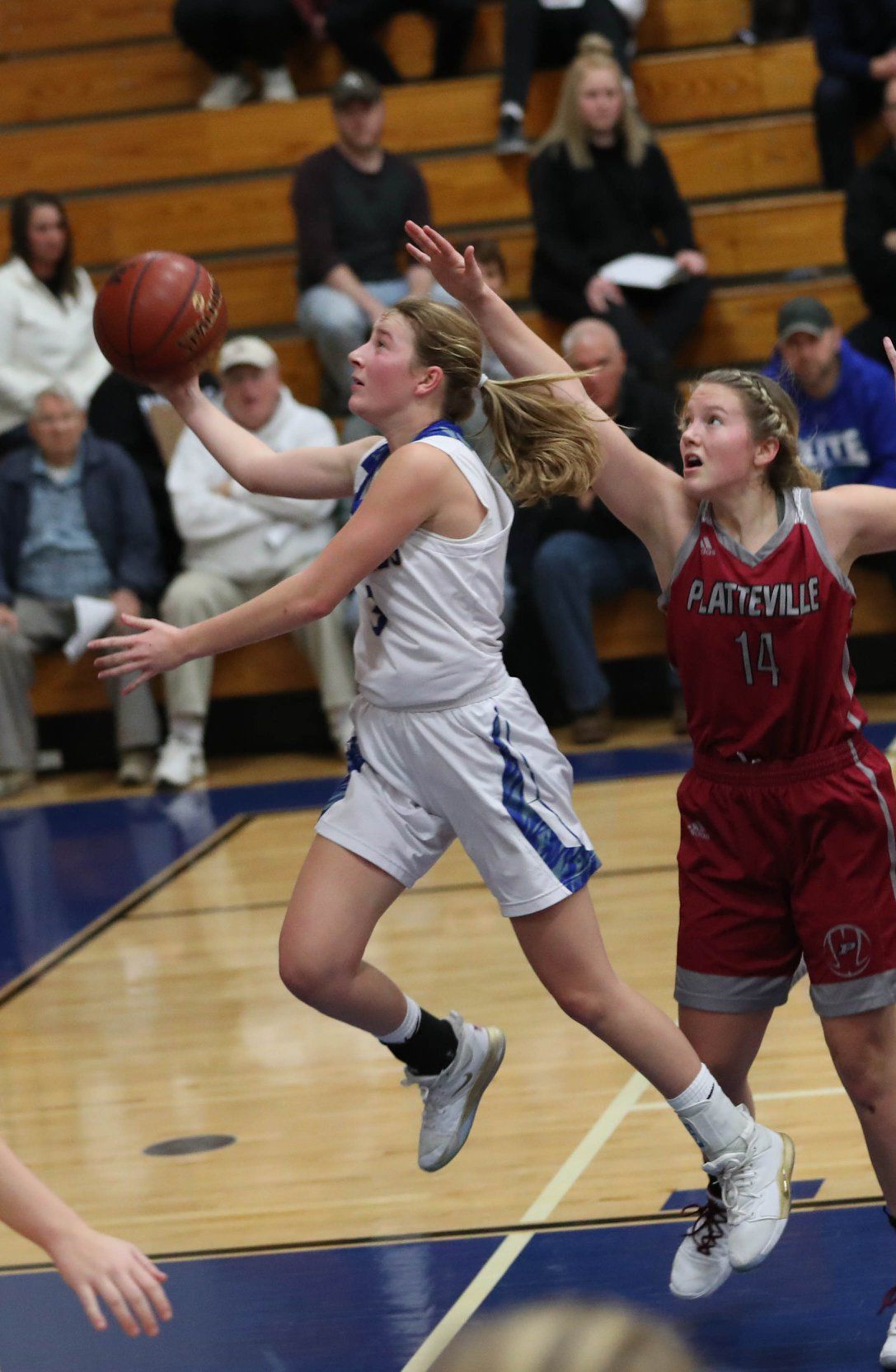 Lake Mills junior guard Julianna Wagner drives to the basket in a girls basketball game against Platteville this season. 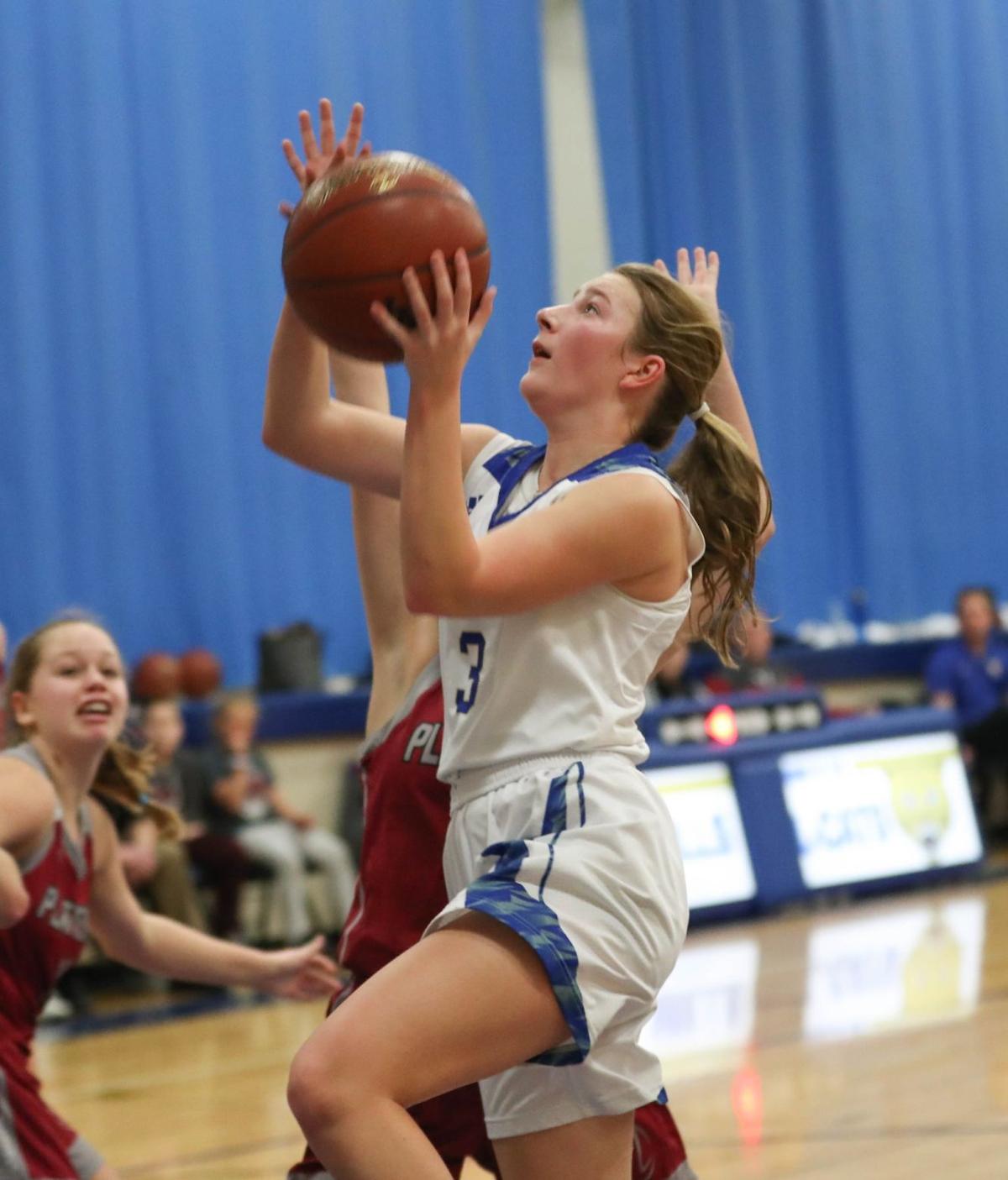 Lake Mills junior Julianna Wagner drives toward the basket during a girls basketball game this season. 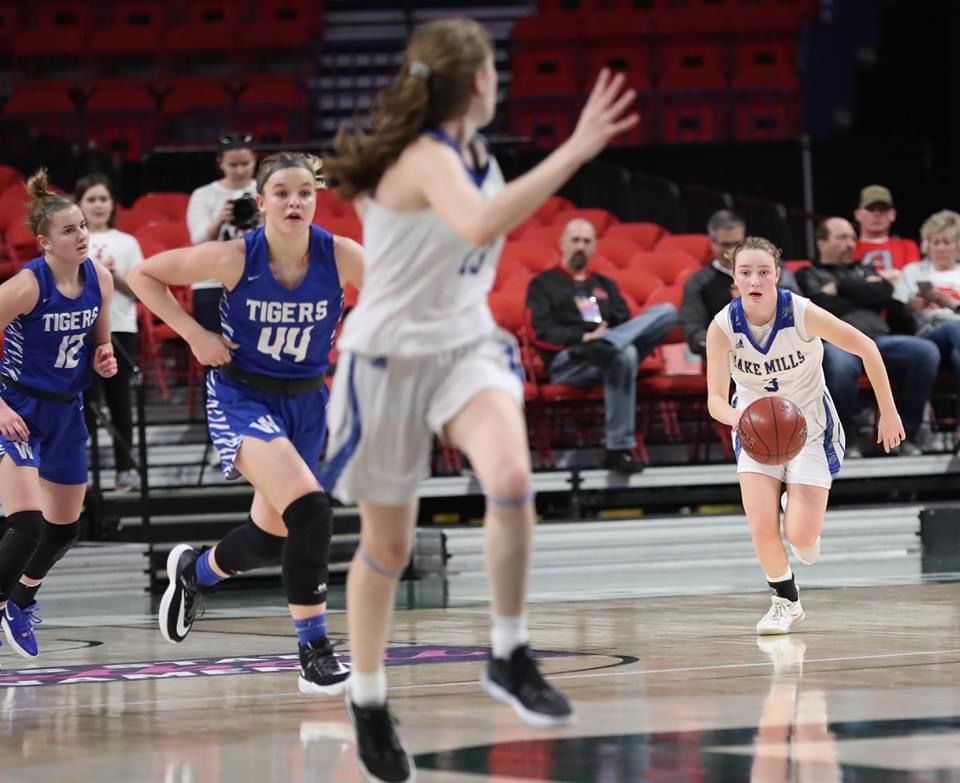 Lake Mills junior guard Julianna Wagner, with ball, looks up court during the L-Cats' Division 3 semifinal against Wrightstown during the WIAA Division 3 girls basketball tournament March 12 at the Resch Center in Ashwaubenon.

Julianna Wagner sat on the bench in the Resch Center, her left knee wrapped in ice and her leg stretched across several chairs.

But for Wagner, the L-Cats’ first state appearance, which began March 12 with tangible excitement in Lake Mills, became like nothing she could have envisioned.

Just prior to the team leaving for Ashwaubenon that morning, the L-Cats, the coaching staff led by Brandon Siska and a large group of students and fans who had gathered for a boisterous send-off instead experienced disappointment after being notified the WIAA was limiting crowd size due to concerns about the COVID-19 pandemic.

“It was really hard, especially when everyone was wanting to be there so bad,” Wagner said. “When we all didn’t get to go, it was really difficult.”

Melissa Wagner, Julianna’s mom, said the team was in shock and many of the supporters’ smiles turned to frowns of dismay. They now wouldn’t be among the traveling party of 90 (not including the team) permitted into the arena and instead would watch on television.

Then, later that afternoon — only 6 minutes, 37 seconds into Lake Mills’ WIAA Division 3 semifinal against Wrightstown — Capitol North Conference Player of the Year Wagner drove to the basket as she’s done countless times before. This time, she injured her left knee and fell to the floor.

“I knew something was wrong,” said Wagner, who recently had knee surgery and is expected to be sidelined for nine months. “I didn’t think it was going to be this bad.”

The 5-foot-5 junior guard was helped to the locker room for initial examination. At halftime, Wagner and teammate Taylor Roughen, who injured her ankle late in the first half, tried to test their mobility.

“I was trying to get back to help the team and I know Julianna was, too,” Roughen, a junior, said after the game. “She was trying to push through it. She is tough. We are all tough.”

Roughen returned and played, but Wagner came back midway through the second half as a spectator. She cheered her team’s comeback before Wrightstown scored the game’s final eight points and pulled out a 62-54 victory.

“It was not how I wanted it to go,” said Wagner, one of the team’s captains. “I was excited for all of them and how hard they all played and worked, and it showed.”

After the four first-day games were played, the WIAA canceled the rest of the tournament late that night due to concerns about the COVID-19 pandemic.

“As hard as all of these girls have worked, we wanted them to have the opportunity to play — to get to show the work they put in,” said Jeff Wagner, Julianna’s father. “Obviously, it was a little bittersweet for our family. It was really difficult; you never want to see your child in pain or see their dream of doing something cut short.”

Lake Mills was the only area team that played in the tournament; Oregon, Beaver Dam and Middleton didn’t get to play their respective games March 13.

A month later, Wagner is at home, like everyone else due to Gov. Tony Evers’ “safer at home” order in response to the coronavirus outbreak.

She said she had surgery to repair a torn ACL and to shave a torn piece of meniscus in her left knee April 9 at Watertown Regional Medical Center.

Wagner, who also plays soccer and tennis, said her recovery time is expected to be nine months. This spring’s soccer season hadn’t begun due to the pandemic and she will be sidelined during tennis in the fall.

Wagner, who was a second-team selection on the Wisconsin State Journal’s 2019-2020 All-Area girls basketball team and an honorable mention choice on The Associated Press All-State team, hopes to return sometime during the 2020-21 basketball season.

During the current health situation, Wagner completes virtual schoolwork at home while spending days with her parents — who are working at home — and older brothers Brady, a UW-Stevens Point junior and men’s basketball player for the Pointers, and Eli, a senior at Lake Mills who played on the boys basketball team.

One that no longer includes running from one activity to the next.

“We, obviously, miss sports,” Jeff Wagner said. “We now have more sit-down meals together as a family and a lot more time as a family. We play cards and board games. We have a lot of good family time.”

In a brace after surgery

Julianna does exercises for her knee and ices it, but right now most often wears a brace, which keeps her leg straight and immobilized.

On the bright side, she said being at home is more convenient than trying to move around at school while wearing a knee brace or having to leave school for medical appointments.

Her friends and teammates sent her a video and dropped off snacks, including 3.5-pound bulk bags of Swedish Fish candy. Phone calls and texts fill time, but she misses talking in-person with her friends and not being physically active.

“It’s been really boring,” said Julianna, who’s been watching a lot of shows on NetFlix.

Trying to find the positive

It has taken the Wagners the month’s span since the state tournament to see any positives.

There was much disappointment, particularly for seniors who didn’t finish on the big stage.

“There is no good ending there,” Melissa Wagner said.

But now, from a Lake Mills perspective, Jeff and Melissa Wagner are glad the L-Cats played their game.

“For the girls, it was exciting for them, it was exciting that they got to play,” Melissa Wagner said. “A lot of teams like Oregon and Oconomowoc — where Julianna has friends, and for Oconomowoc it was their first time going — they didn’t get the experience of playing at state. Looking back, they were fortunate to get there and get to play.”

Reaching the state tournament meant a great deal to Melissa Wagner and the other parents who coached many of the team’s girls as youths in travel ball.

“It was as much their dream as it was ours,” said Melissa (Bohringer) Wagner, who played basketball at UW-Platteville.

Wagner averaged 13.3 points, 4.4 assists, 2.9 rebounds and 2.0 steals while shooting 39.3% from 3-point distance and 82.9% from the free throw line for the Capitol North champion L-Cats, who finished 24-3 while continuing their program rise.

Third-year coach Siska took over a program that won two games in 2016-17, including none in conference play. In 2018-19, Lake Mills shared the league crown with Lodi and then-sophomore Wagner was conference co-player of the year with Lodi’s Alana Gilles.

“It was amazing, looking at everything we accomplished this year,” Julianna Wagner said. “We wanted to do this since we were freshmen coming onto the team.”

She’d like to do it again — without all the drama that ended this season so abruptly.

“I think we have a very bright future,” said Wagner, who’d like to play basketball in college. “We have the same girls. We want to be back at state next year.”

The WIAA Board of Control, which met virtually Friday, explored financial recommendations, verified dates for the boys golf state tournament in June, 2021, and approved an extension of the alternate year physical exam period.

Lake Mills junior guard Julianna Wagner directs the offense during the first half of the L-Cats' Division 3 semifinal against Wrightstown at the WIAA girls basketball state tournament March 12 at the Resch Center in Ashwaubenon.

Lake Mills junior guard Julianna Wagner drives to the basket in a girls basketball game against Platteville this season.

Lake Mills junior Julianna Wagner drives toward the basket during a girls basketball game this season.

Lake Mills junior guard Julianna Wagner, with ball, looks up court during the L-Cats' Division 3 semifinal against Wrightstown during the WIAA Division 3 girls basketball tournament March 12 at the Resch Center in Ashwaubenon.