Become a Member
Read Today's E-edition
Share This
Chippewa County Football Player of the Year: Stanley-Boyd's Potaczek bounces back from injury to become two-way all-state standout
Share this
1 of 2 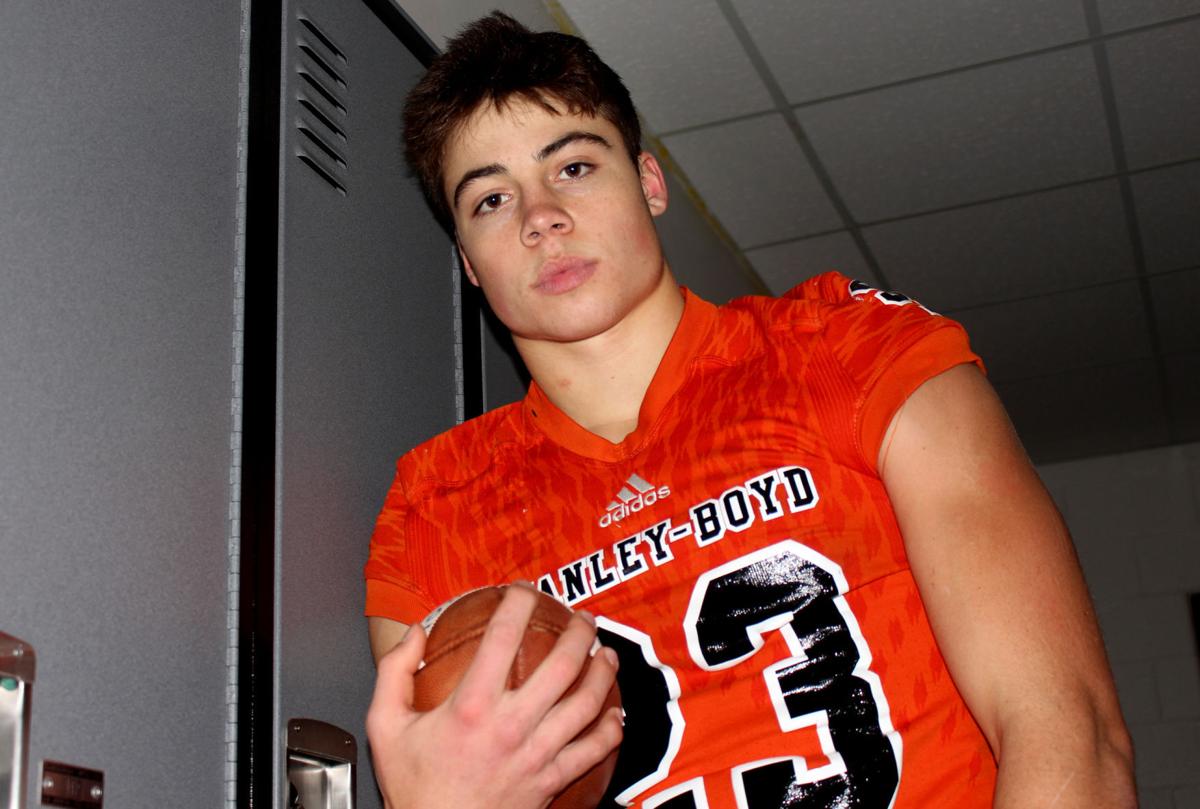 Stanley-Boyd senior Brady Potaczek excelled on both sides of the ball this fall with the Orioles in earning all-state accolades on offense and defense. Potaczek is the 2021 Chippewa County Player of the Year. 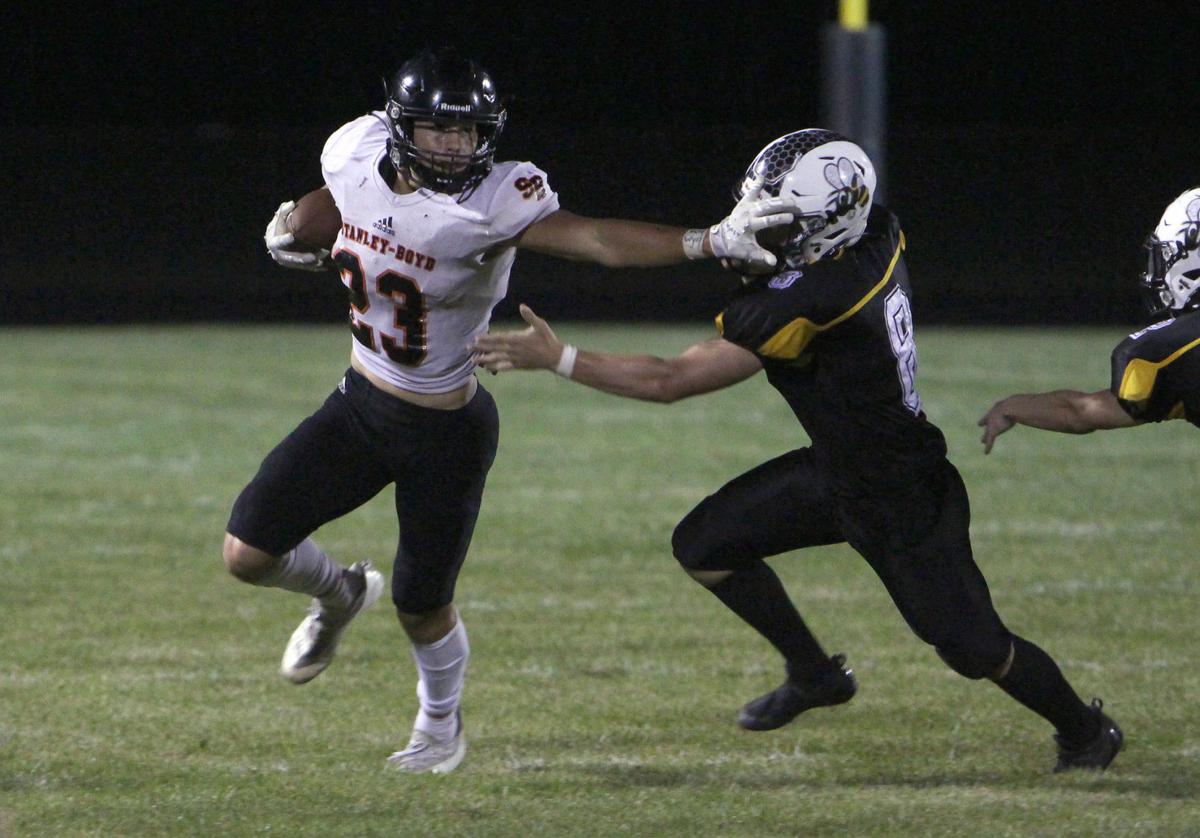 Stanley-Boyd's Brady Potaczek stiffarms Cadott's Ethan West while running with the ball during a game on Aug. 20 in Cadott.

So when he got the chance to show what he could do as an Oriole, he made the most of it.

Potaczek is the 2021 Chippewa County Player of the Year, the latest in a long line of award the Stanley-Boyd senior earned after fortifying his presence on both sides of the ball with all-state efforts.

Before Potaczek stepped foot on the turf at Oriole Park, he knew what it meant to be an Oriole.

Potaczek's uncles Craig and Clint Warminski were stellar two-way players with Stanley-Boyd. Craig was a three-year starter for the Orioles and multi-time All-Chippewa County honoree in the middle of the 2000s and went on to play collegiately at UW-Stout before Clint emerged as another two-way star, helping the Orioles win a Division 5 state championship before sharing All-County Player of the Year honors in 2014 with teammates Zach Turner and Ronny Ponick before playing in college at Winona State.

Both were tough, heavy and physical players and Stanley-Boyd coach Jeff Koenig said it has been easy to see the Warminski influence in Potaczek's game.

“We knew he was a good athlete," Koenig said of Potaczek. "He’s been playing a lot for us, contributing since his sophomore year. He’s just electric and dynamic to watch.”

Potaczek made 33 tackles across eight games as a freshman before running for 326 yards and a score to earn All-Cloverbelt Conference honorable mention status as a sophomore. A promising junior season was cut off short of the finish when he suffered a broken ankle against Durand in the fifth week of the season. Once again, he was able to seek the advice of a Warminski. Clint was unfortunately uniquely qualified to speak about how to battle back from a season-ending injury as he suffered a significant leg injury to cut his senior season short of the finish line. Potaczek wasted no time getting back to work.

“I started lifting right away," Potaczek said. "I was still hurt for five games of basketball but I was lifting the whole time right away.”

He came back to average 11.1 points and 5.6 rebounds per game as a junior for the Orioles on the hardwood in earning All-Chippewa County second team and All-Western Cloverbelt honorable mention accolades. Last spring he helped the Stanley-Boyd 400-meter relay team advance to Division 2 sectionals.

But this fall was the season Potaczek was truly looking forward to.

Stanley-Boyd was stocked with experienced and versatile playmakers coming into the season, a group of athletes including Potaczek that earned some lumps as youngsters at the varsity level.

The Orioles started off the year strong with routs of Cadott and Marathon before falling to eventual Division 6 semifinalist Durand 47-20. Illness that started to creep in when the Orioles lost to the Panthers fully set in the next week and the Orioles had to forfeit their matchup with Stanley-Boyd. The team returned to the field in exciting fashion, scoring a 28-27 walk-off win over Mondovi the next week. Potaczek did his part in the win with 217 receiving yards on 11 catches with two touchdowns on offense while notching 20 total tackles on defense. That started a stretch of five wins out of six games for Stanley-Boyd including a 35-18 playoff win at Arcadia before the team's season came to an end with a 47-8 loss to eventual Division 5 state champion La Crosse Aquinas in the second round of the playoffs.

For the season Potaczek did his part, hauling in 50 passes for 933 yards and 12 touchdowns on offense. Stanley-Boyd featured seven selections to the all-county first team.

“He was able to get open on some vertical routes and get behind people but also he was also someone we could throw the ball short to and just kind of physically dominate some of the defensive backs he went against to make short passes into really big plays," Koenig said.

Potaczek played outside linebacker for much of the year before moving inside near the end of the regular season and finished with 105 total tackles including 14 for loss, three forced fumbles, one sack and one interception on defense.

Potaczek wants to play college football but has not made any final decisions as of yet.

The 6-foot-2, 190-pound dual threat has shown his stuff at a high level program and is ready to work even harder to play at the next level, saying any team that wants him will be getting a hard worker who will go above and beyond what is asked to get the job done.

He's already shown the ability to do just that in becoming an all-state player two ways.

“He’s just a great, great athlete," Koenig said of Potaczek. "He’s a great person to have out there playing for us. It was an interesting year because we had such an outstanding group of skill players but he obviously on the stat side stood out above them all because of what he was able to do.

"Just a great, great addition to our team.”

Look back at All-Chippewa County teams from 2021 for wrestling, girls basketball, boys basketball, volleyball and football.

Stanley-Boyd senior Brady Potaczek excelled on both sides of the ball this fall with the Orioles in earning all-state accolades on offense and defense. Potaczek is the 2021 Chippewa County Player of the Year.

Stanley-Boyd's Brady Potaczek stiffarms Cadott's Ethan West while running with the ball during a game on Aug. 20 in Cadott.