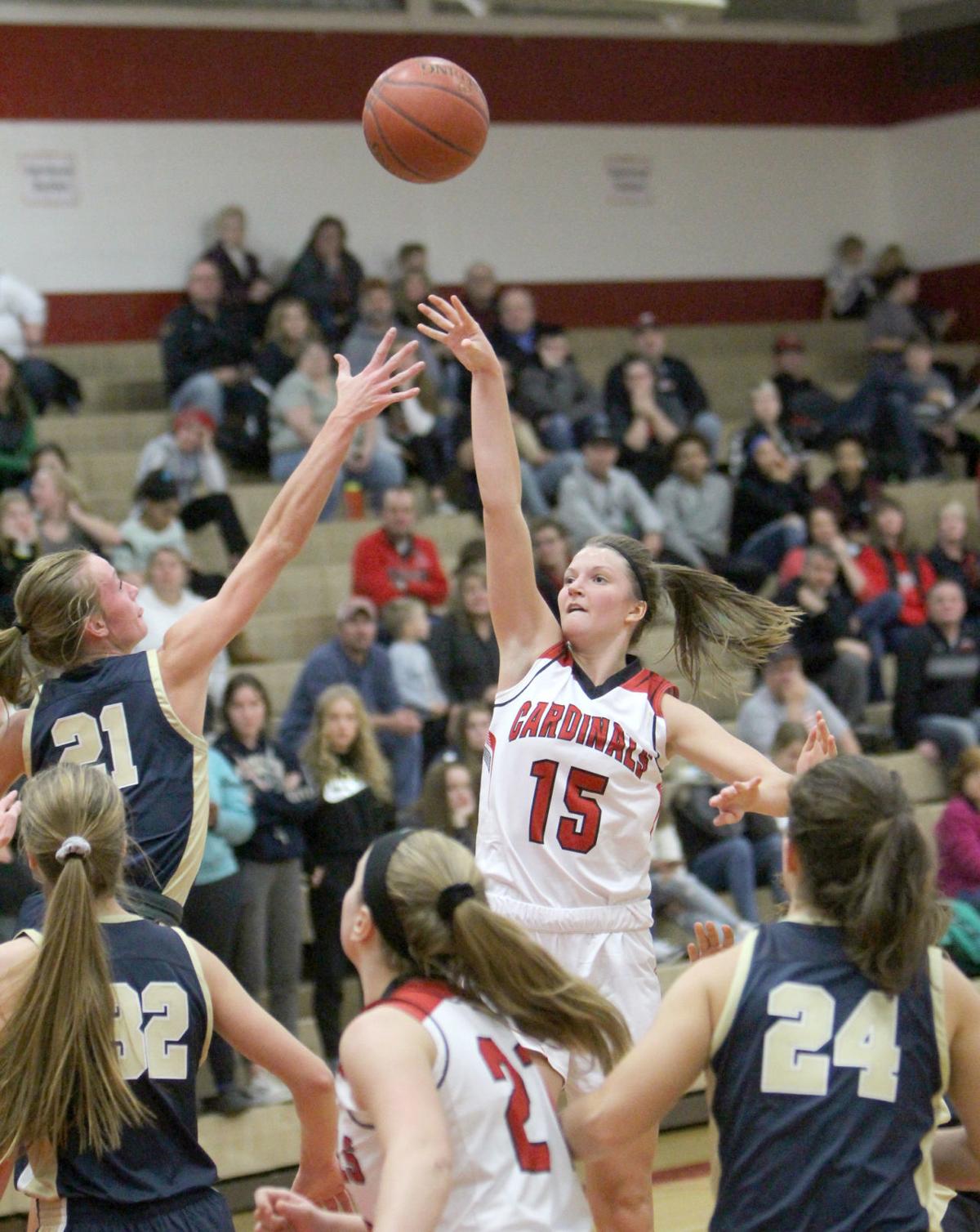 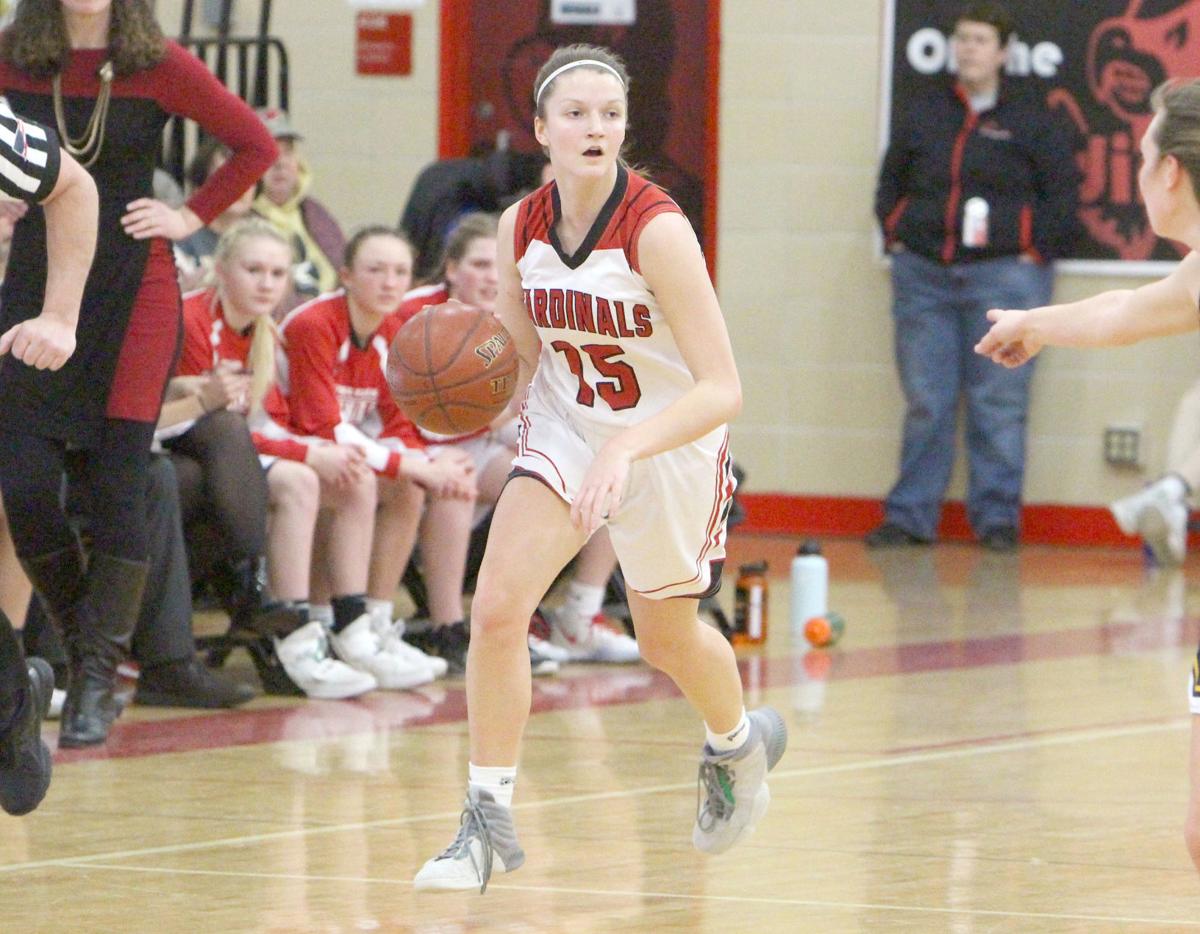 The first thing that stood out to Becca Bestul when she met Caelan Givens is the same thing that has helped Givens become the Chi-Hi girls basketball program's career scoring leader.

Givens is always adding to her game, picking up a new skill, move or ability. Whatever it takes to get to the next level.

The 5-foot-11 senior has done that, scoring more points than anyone in Cardinal program history and pushing her into a new stratosphere as she gets ready to take on her next challenge this fall — Division I college basketball at UW-Green Bay.

Givens is the 2019-20 Chippewa County Girls Basketball Player of the Year, the second year in a row she has earned the award.

Impact from start to finish

Bestul took over the Chi-Hi girls basketball program in 2016 and soon after got a look at the players on her new team in an open gym.

She inherited a program that had won five consecutive Big Rivers Conference titles under previous coaches John Pollock and Alison Becker and returned a strong group of upcoming seniors. But she also saw a talented group of incoming freshmen, including a young Givens who didn't shy away from putting in the work no matter where she was playing.

“She can go in a gym and get a workout in by herself, which is pretty not typical of high school kids," Bestul said of Givens.

Givens made an impact as a freshman, finishing second on the team in scoring after averaging 12.9 points per game as the Cardinals finished 19-7 and advanced to the Division 1 sectional finals before falling to eventual state champion Appleton North. Givens credited that year's senior class as influential into her development, helping her get up to speed with the varsity game and helping her and her freshmen teammates feel comfortable at the high school level.

Most of those youngsters took on a bigger role leading the team the next year as sophomores with Givens averaging 19.6 points per game while earning first team All-Big Rivers Conference and All-Chippewa County accolades to go with Division 1 all-state honorable mention. Chi-Hi went on to win its eighth straight Big Rivers Conference championship in Givens' junior year with her averaging 20.4 points per game, earning first team all-state, all-conference and all-county honors along the way. Givens broke former teammate Lexi Hanley's school scoring record the same year as she was named the Big Rivers Conference Player of the Year.

This season Givens averaged 15 points per game while pulling down 4.2 rebounds and dishing 3.6 assists in earning first team all-conference honors and Division 1 all-state honorable mention. She missed three games near the end of the regular season with an ankle injury and while Givens trusted her teammates to play well in her absence, she was champing at the bit to return to the floor.

“It was not easy for me," Givens said of missing time. "I love watching the game of basketball but not when I should be playing.”

She scored a then season-high 20 points in her return, a 65-44 win over Holmen on Feb. 10 before a 23-point performance in the team's 68-66 regular season finale win over Big Rivers Conference champion River Falls on Feb. 21. Overall, Givens averaged 19.5 points in her final four games of the season after returning.

For Givens, her career will also be remembered for the amount of court time from youth to varsity she was able to spend with her classmates with largely the same group playing together on varsity for the last three years.

“It definitely went to our advantage," Givens said of this year's senior group playing together so long. "Growing up with those girls you kind of have a feel for everyone’s game and they have a feel for yours. You just start to work off each other more and that’s why we had such good success. We knew each other’s strengths and how to bring out the best in each other.”

Adding to her game

Givens has added to her repertoire each year, according to Bestul.

As a freshman, getting familiar with the speed and physicality of high school basketball took some time and even looking back now, Givens can easily see the improvement she's made in something that has become one of her biggest strengths.

“From the time I was a freshman until now, I look back, and I was a scrawny little girl, and I would take it to the hoop, but I wouldn’t finish as strong as I can now," Givens said.

Givens has enhanced her game on both ends of the floor, most recently improving her 3-point percentage by nearly 10 percent compared to last season.

“She sets goals for herself and she works at meeting those goals and does," Bestul said of Givens. "That’s pretty rare in high school kids to do that on their own without a coach there telling them exactly what to do.”

Givens fell in love with basketball from her first organized game as a four year old and it's been a big part of her life ever since. She's even put in work to prevent injury with daily exercises designed to help strengthen the ACLs in her knees, a common injury in women's basketball.

Her interests aren't just limited to the court either. Givens is heavily involved in the school's DECA program and helped organize a food drive before one of the team's games this season.

“She’s very into the things she does," Bestul said of Givens. "She’s very passionate about her interests and basketball has always been one of those.”

Givens committed to UW-Green Bay between her sophomore and junior years, culminating a dream she had to play for the Phoenix since she was younger.

“When people asked me if I wanted to play college basketball I said, ‘Yes,’ and I pictured myself playing at Green Bay,” Givens said after signing with UW-Green Bay last November. “That’s always where I saw myself playing, and I wanted to be ultimately.

“I was born in Green Bay and to go back to the city is the best thing ever.”

Taking the step to Division I college basketball is significant, but it's one Givens is confident she can make. The recent social restrictions as a result of COVID-19 has made training for Givens and other athletes tougher, but she has been able to get in work from home and not miss a beat in her preparation.

“It’s never easy to come in as a freshman. It’s a different physicality, it’s faster, it’s just a different game," Givens said of the jump. "So I’ve just been trying to work on being stronger and being more explosive and quickening up everything. Have a quicker first step, broaden my move so I have counter moves for every move I make because everyone’s a better defender and there’s a ton of athletic people in Division I basketball.”­

Givens leaves the program as the all-time leading scorer with 1,574 points, well ahead of Hanley's 1,161.

“She has a record that I don’t know if anyone will beat ever," Bestul said of Givens' scoring record.

But ultimately the footprint Givens has left with the Cardinals goes beyond just scoring baskets. It's the impact she had as a teammate and representative for Chi-Hi girls basketball.

“I just think she is a very good kid," Bestul said of Givens. "She’s passionate about what she does, she gets involved in things she does. She cares about people. She cares about how people feel when she’s with them, and she deserves all of the accomplishments and the accolades she’s gotten because she’s worked so hard for them.”

And it's a partnership she's enjoyed every step of the way.

“It’s been so enjoyable and there’s no other community I’d rather play for," Givens said. "There’s people from other schools, Eau Claire schools that I’ve talked to that have literally said your community comes to every game, and it’s a tough atmosphere to play at Chippewa unless you’re Chippewa because we have such a good student section and our band is amazing and our community and our fans are just so great and they make that environment so much more enjoyable. It makes it easier to win because they really do help us and push us.

"To be able to say I played for Chippewa Falls is pretty awesome.”

See previous All-Chippewa County girls basketball teams ahead of this weekend's release of the 2019-20 team.