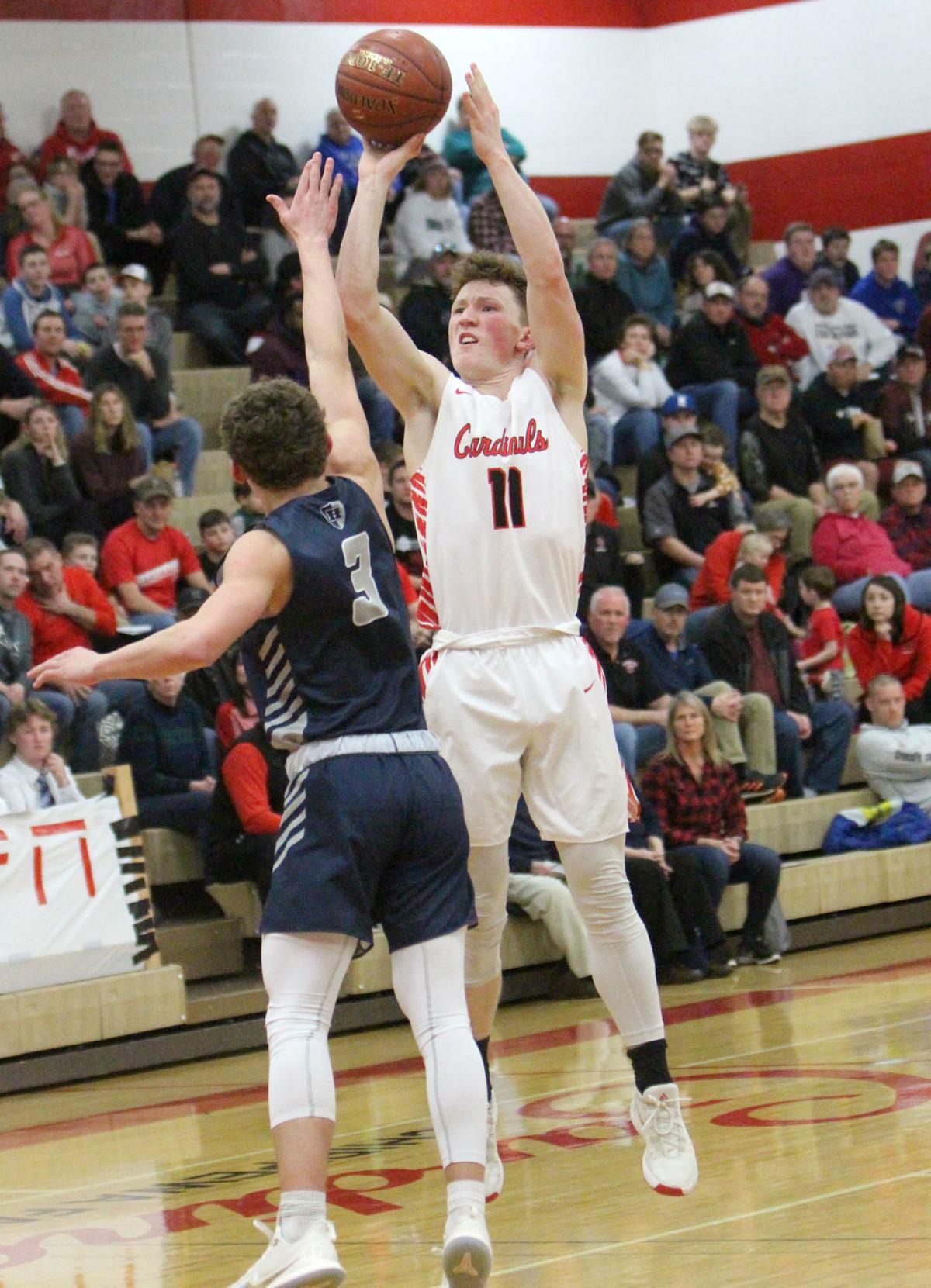 Chi-Hi's Nick Bruder puts up a shot during a game against Hudson on Feb. 1 at Chi-Hi. 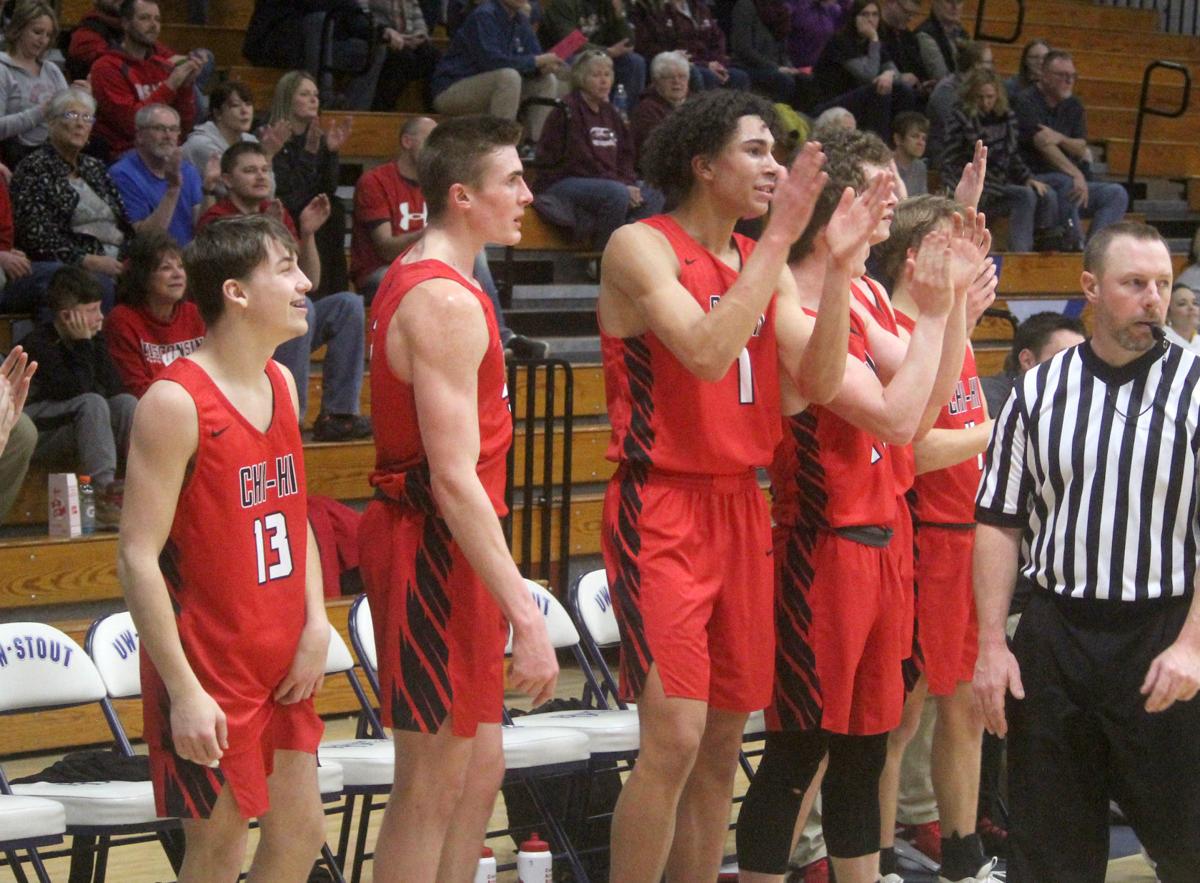 Members of the Chi-Hi boys basketball team celebrate during the final seconds of last Tuesday's victory over Menomonie in Menomonie.

The Chi-Hi boys basketball team has maintained a laser-like focus this season.

As the Cardinals racked up victories and moved to the top of the Big Rivers Conference, the team never got too wide eyed or ahead of itself. Instead the Cardinals were always simply focused on the next opponent.

That mindset led the program to its first outright Big Rivers Conference championship since 1980 and has the Cardinals (17-5) thinking big as they start the Division 1 playoffs on Friday night as a No. 3 seed at home against No. 14 Appleton East (4-18).

“We’ve been preaching that since the start of (the season) that next play," Chi-Hi coach Jason Proue said of the team's focus. "We don’t try to get too far ahead of ourselves, we don’t look back at all except to learn from things when we lose and these guys have really grabbed onto that and held onto that and have done a very good job of owning that.”

Chi-Hi entered 2020 with a 5-2 record with a win over Division 2 state-ranked Stoughton 55-54 on Dec. 27 and a pair of single-digit losses to eventual Middle Border Conference co-champion New Richmond and Hudson. The gameplan early for the Cardinals was to blend a dynamic and versatile roster, a group with a variety of experience levels.

The Cardinals had several big games on the horizon, starting with a 69-67 win at Eau Claire Memorial on January. Near the midpoint of the month a monster home contest with league title favorite Eau Claire North loomed as the Cardinals were ready, prevailing 59-52 over the Huskies to establish the program as a firm contender for the Big Rivers crown.

“In my four years here (Eau Claire) North has been a big contender and whoever they have, they’re always up there and bringing the energy so us coming out here having a lot of foul trouble and being able to pull it out (and) have trust in the teammates, I knew we had something," Chi-Hi senior Nick Bruder said of the win.

Chi-Hi went on the road next and lost at Onalaska 73-52 to Division 2's top-ranked team, a game where the Cardinals played well at times but also saw there was still work to be done. Proue told the team that Jan. 21 contest could be a key point in the season, but only if the Cardinals treated it as such.

“I think the guys really went in the right direction after that," Proue said.

Chi-Hi went on to rattle off a 9-game winning streak with wins over Eau Claire North, Hudson, Wisconsin Valley Conference champion D.C. Everest, Great Northern Conference champion Medford and River Falls, among others. The team clinched the outright league title with a 70-39 win at Menomonie last Tuesday before the Cardinals had their winning streak snapped in a 70-69 loss at River Falls in the regular season finale two days later. Chi-Hi was without senior standout Peyton Rogers-Schmidt due to illness, but was leading until the end when the Wildcats hit a game-winning shot in the closing seconds, returning the favor after Rogers-Schmidt made a 3-pointer in the final seconds of Chi-Hi's 59-56 win over the Wildcats on Feb. 17.

“The guys played unbelievable," Proue said of the loss. "They came out there and battle and competed and had to play a little bit different but showed that if a guy is down its next man up and we’re not down and out just because one of our top guys is out.”

The team already has the most victories in a single season for the program since going 21-3 in 1988-1989, but as the victories piled up the team's focus never changed.

“I don’t think our mindset changed," junior Joe Reuter said. "It was always going to be there and we just have to work hard and hold each other accountable and the rest of it will figure itself out.”

That season-long focus helped the Cardinals earn a No. 3 seed in their sectional, behind state-ranked Kimberly and Neenah. Chi-Hi will be home through the regional finals as long as the team keeps winning. The team has lost just once at home this season, a 71-62 defeat to New Richmond on Dec. 9.

“We haven’t been this good the past few years and we know we’ve got to take every game seriously," Rogers-Schmidt said. "We can’t let up on any team and it’s going to be a tough game every night.”

Improvement to his outside shot and ball handling has helped Chi-Hi senior Peyton Rogers-Schmidt gain the attention of college basketball coaches and get to the next level.

This year's Chi-Hi team has already shown a knack for making history and for a team always looking for more, there is more left to accomplish on the horizon. The program's last regional championship came in 1998. The program's last trip to state? 1941.

The Chi-Hi boys basketball team is back in sectionals for the first time since 1998 when they face Neenah on Thursday in Marshfield.

Photos from Monday's boys basketball contest between Chi-Hi and River Falls at Chi-Hi.

Photos from Tuesday's boys basketball contest between Chi-Hi and D.C. Everest at Chi-Hi.

Photos from Saturday's boys basketball contest between Chi-Hi and Hudson at Chi-Hi.

Photos from Monday's boys basketball contest between Chi-Hi and New Richmond at Chi-Hi.

Chi-Hi's Nick Bruder puts up a shot during a game against Hudson on Feb. 1 at Chi-Hi.

Members of the Chi-Hi boys basketball team celebrate during the final seconds of last Tuesday's victory over Menomonie in Menomonie.