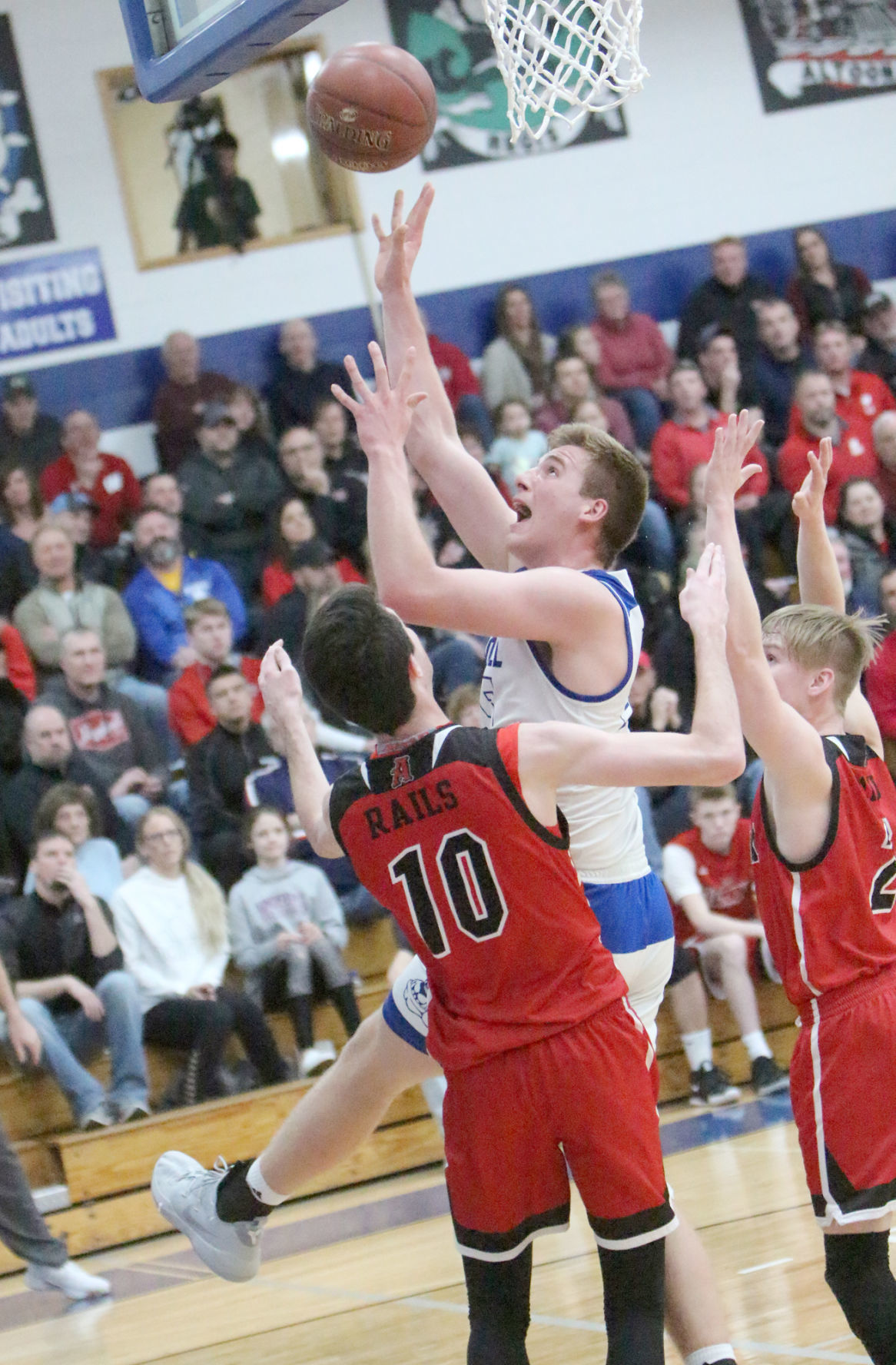 McDonell's Eion Kressin puts up a shot during a game against Altoona on Jan. 10 at McDonell. 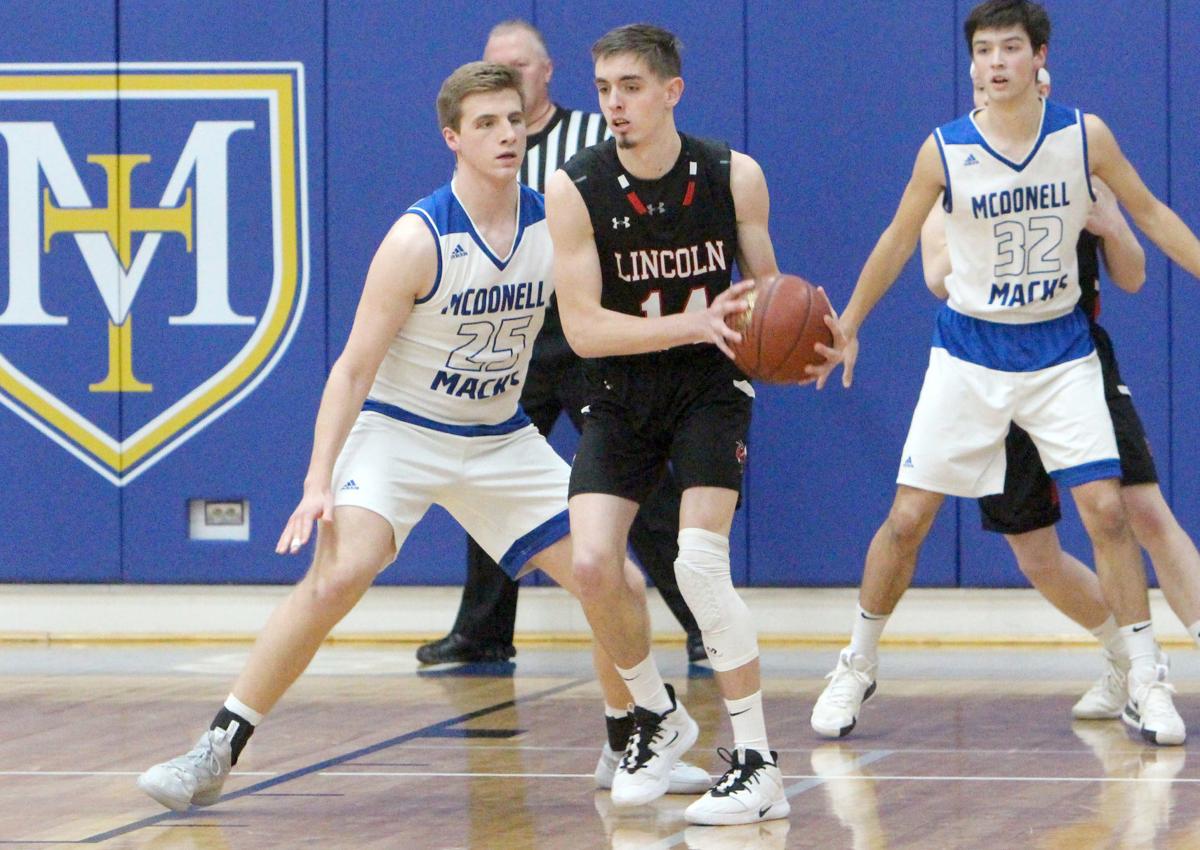 McDonell's Eion Kressin defends during a game against Alma Center Lincoln on Jan. 18 at McDonell.

And the more he’s thought, the more he was confident with where he wanted to be.

Kressin wrapped up a successful career with the Macks this season after averaging 13.2 points per game along with 9.5 rebounds per contest in helping McDonell earn a 19-7 overall record and a berth in the Division 5 sectional finals for a sixth straight season. The 6-foot-5 senior was selected to the All-Western Cloverbelt Conference first team and was chosen as an honorable mention on the Wisconsin Basketball Coaches Association Division 5 all-state team.

First breaking onto the varsity scene in a big way as a sophomore, Kressin averaged nine points in 2017-18 and scored a season-high 16 points in McDonell’s 56-46 Division 5 state semifinal victory over Deerfield. Second-year McDonell coach Adam Schilling was familiar with Kressin prior to taking over the program before Kressin’s junior season and quickly knew he was a player the program could count on as a cornerstone.

“A big part of the offenses we run is having a well-established post player,” Schilling said. “He is one person I knew right away we could count on to get the ball inside and try to break down the defense to get other guys shots and to have him score himself.”

Kressin went on to average 9.5 points per game in his junior campaign where McDonell advanced to state for a fourth year in a row before falling to eventual state champion Sheboygan Area Lutheran 74-61 in the semifinals. Hard work throughout his high school career paid dividends for Kressin, who was on the radar of St. Mary’s early. The six weeks of downtime following the sudden cancellation of the rest of the boys basketball playoffs left Kressin with plenty of time to ponder his collegiate future.

“Every year we lost some key, important guys and every year I looked to myself to get better and add new things to my game,” Kressin said. “I just got better at a lot of things. I think they were always there but the level of execution I was able to carry them out with over the past few years was the major thing.”

This year Kressin worked on his game away from the basket, drawing defenders out to keep them from packing the paint.

“I shot a few 3-pointers my sophomore year and I don’t think I shot any my junior year but it’s a nice addition to my moves and as far as having that outside threat, it’s a lot easier to be a threat down low too because they’re not always expecting you to get it down low and put it up,” Kressin said.

The Macks were denied the opportunity to play for the program’s fifth straight trip to state when the remaining boys basketball postseason was cancelled following the team’s sectional semifinal win over Thorp. McDonell was set to square off with Luck in a sectional final rematch. Although his prep basketball career ended abruptly, Kressin said what he’ll remember most are the friendships and relationships formed with former teammates and the success they had together.

His coach will remember a leader that will be difficult to replace.

“As a player he’s a great leader. He was always taking everything really serious. You never really questioned his effort,” Schilling said. “I don’t think there was one time in the two years I worked with him that I didn’t see him really bring his best every practice. He’s a great example to the younger kids on how to work hard and set goals.”

Schilling called Kressin a ‘team-first’ type of player that he was proud to coach.

Kressin could take over a game in the low post on offense, but said his favorite things to do on a basketball court are to play defense and rebound — a passion that has been enforced as he has watched ‘The Last Dance’ documentary series on ESPN chronicling the 1997-98 Chicago Bulls and their enigmatic defensive dynamo Dennis Rodman.

Now Kressin will bring that passion to the college game with the Cardinals.

Photos from the boys basketball Division 5 regional final game between McDonell and Clear Lake on Saturday, March 7, 2020 at McDonell.

Photos from Friday's boys basketball contest between Cadott and McDonell in Cadott.

Photos from Thursday's boys basketball game between McDonell and Altoona in Altoona.

Photos from Friday's boys basketball game between McDonell and Altoona at McDonell.

Photos from Friday's boys basketball contest between McDonell and Fall Creek at McDonell.

McDonell's Eion Kressin puts up a shot during a game against Altoona on Jan. 10 at McDonell.

McDonell's Eion Kressin defends during a game against Alma Center Lincoln on Jan. 18 at McDonell.