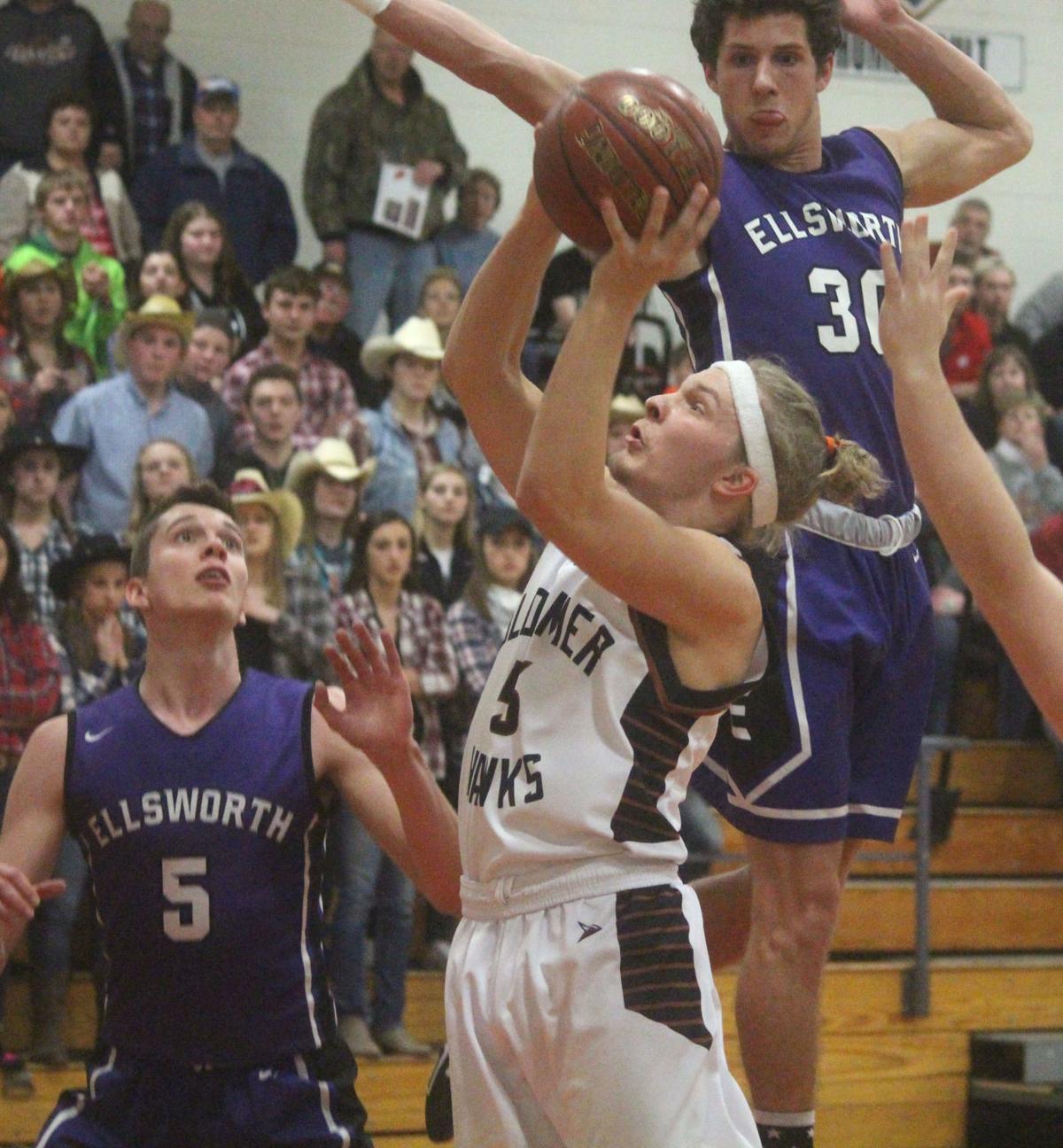 Bloomer's Caleb Ruf takes a shot as Ellsworth's Alex Motley (30) goes for a block on Saturday in Bloomer. 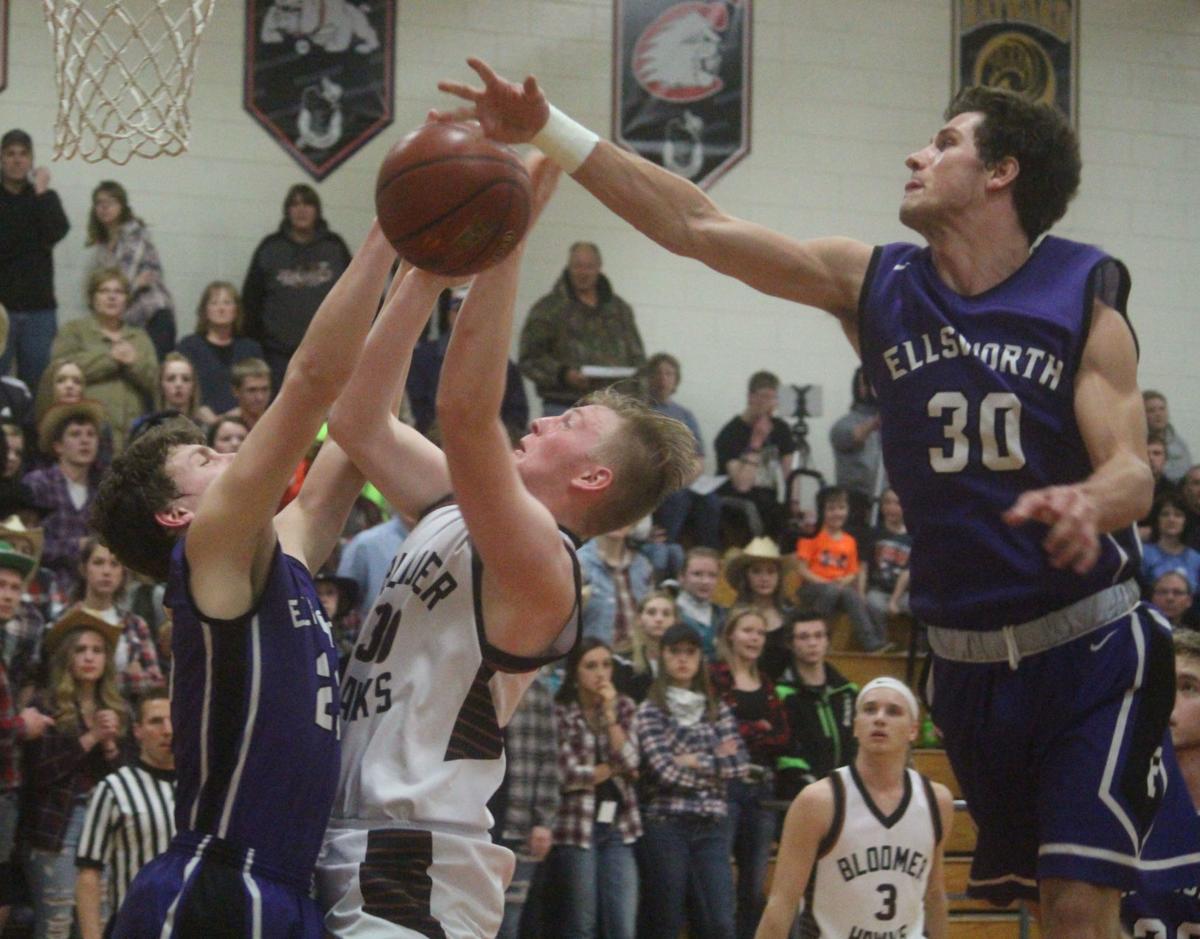 Bloomer's Loren Stolt has a shot blocked on Saturday evening in Bloomer.

BLOOMER — The Ellsworth boys basketball team was lethal from long range on its way to a 63-42 win over Bloomer in the Division 3 regional finals on Saturday.

The third-seeded Panthers (20-4) made nine 3-pointers, including six in the first half to build a sizable lead, and shot 53 percent from behind the arc over the course of the game. Meanwhile, second-seeded Bloomer (21-3) was stretched thin and couldn’t find a way to keep up or slow Ellsworth down.

“Our goal coming into the game was to not give them any easy baskets,” Bloomer coach Greg Van Grunsven said. “I think for the most part in the first half, we did. Credit them (Ellsworth), they were able to knock down half a dozen threes in the first half to stretch us out a little bit more. In the second half our woes offensively kind of carried over onto the defensive end of the floor.”

Ellsworth will face No. 1 seed Prescott in the sectional semifinals on Thursday in New Richmond.

The two teams were close through the first nine minutes of the game on Saturday. Ellsworth built a 12-7 lead, but Bloomer’s Bradley Sarauer single-handedly kept up with the Panthers by scoring all of the Blackhawks’ points.

Alex Motley and Drake Flom hit the third and fourth 3-pointers of the game for Ellsworth midway through the second half to push the Panthers’ lead to 18-7.

Cole Woodland and Flom both hit 3s in the final two minutes of the half to start an 8-0 run the Panthers would end the half on. That pushed the lead to 30-15.

Bloomer couldn’t find many ways to create its own shots in the first half, and went without a point from the 11:11 mark to the 5:49 mark, when Masen Miller scored to end the drought.

The Blackhawks were without all-time leading scorer Payton Dachel due to injury, and his presence was missed in the paint.

“Whenever you’re not able to score the basketball consistently, everything gets a little more magnified,” Van Grunsven said.

On the defensive end, Bloomer threw a variety of zones at Ellsworth in search of the right formula to slow them down—to no avail.

“We played three different zones over the course of the game, just to try to get them off specific spots and get them out of their momentum, their flow,” Van Grunsven said.

The Panthers stayed hot after halftime, opening the second half with a 7-0 run which was finished off by two more 3-pointers by Motley and Woodland.

Bloomer scored just six points in the first eight minutes of the second half, as Ellsworth slowed down the pace considerably and was able to comfortably see out the victory. The Panthers went on a 7-0 run late in the game to go up 60-32, prompting both team’s starters to be pulled from the contest for good.

“We wanted play in the manner we have been successful in all year long. That is to share the ball and screen for one another, and help one another on the defensive end of the floor. For the most part, we did that. Credit Ellsworth for a terrific first half and shooting the lights out,” Van Grunsven said.

Sarauer tied with Ellsworth’s Logan Benson for a game-high total of 19 points. Flom and Motley had 14 and 13, respectively, for the Panthers. Aaron Price added six for Bloomer.

Ellsworth shot 56 percent from the field, compared to 29 percent for Bloomer.

The Blackhawks will lose a small but successful senior class to graduation. Dachel, Price and Miller will move on. The three helped Bloomer win its outright first Heart O’ North Conference title since the 2011-12 season this winter after the program shared the crown last year.

“Those three seniors leave us having had a tremendous amount of success at Bloomer High School and in the basketball program,” Van Grunsven said. “They’ve been good leaders on the basketball floor. It’s unfortunate that two of them, Aaron and Payton, weren’t able to stay healthy throughout the course of the season. It makes you wonder what might have been, but that’s sports.”

Bloomer put together one of its strongest seasons in years under first-year coach Van Grunsven, and should have most of its roster back next winter.

“The kids should be very content, very satisfied, very pleased with the overall season. There shouldn’t be any disappointments,” Van Grunsven said. “The biggest thing is that they’ll look back at the 2017-18 season with an awful lot of fond memories.”

Check out a week's worth of prep sports stories from The Herald.

Chippewa.com's 20 Most Read Sports Stories of 2018

The 20 most read sports stories at chippewa.com in 2018, counting down from twenty to number one.

Bloomer's Caleb Ruf takes a shot as Ellsworth's Alex Motley (30) goes for a block on Saturday in Bloomer.

Bloomer's Loren Stolt has a shot blocked on Saturday evening in Bloomer.