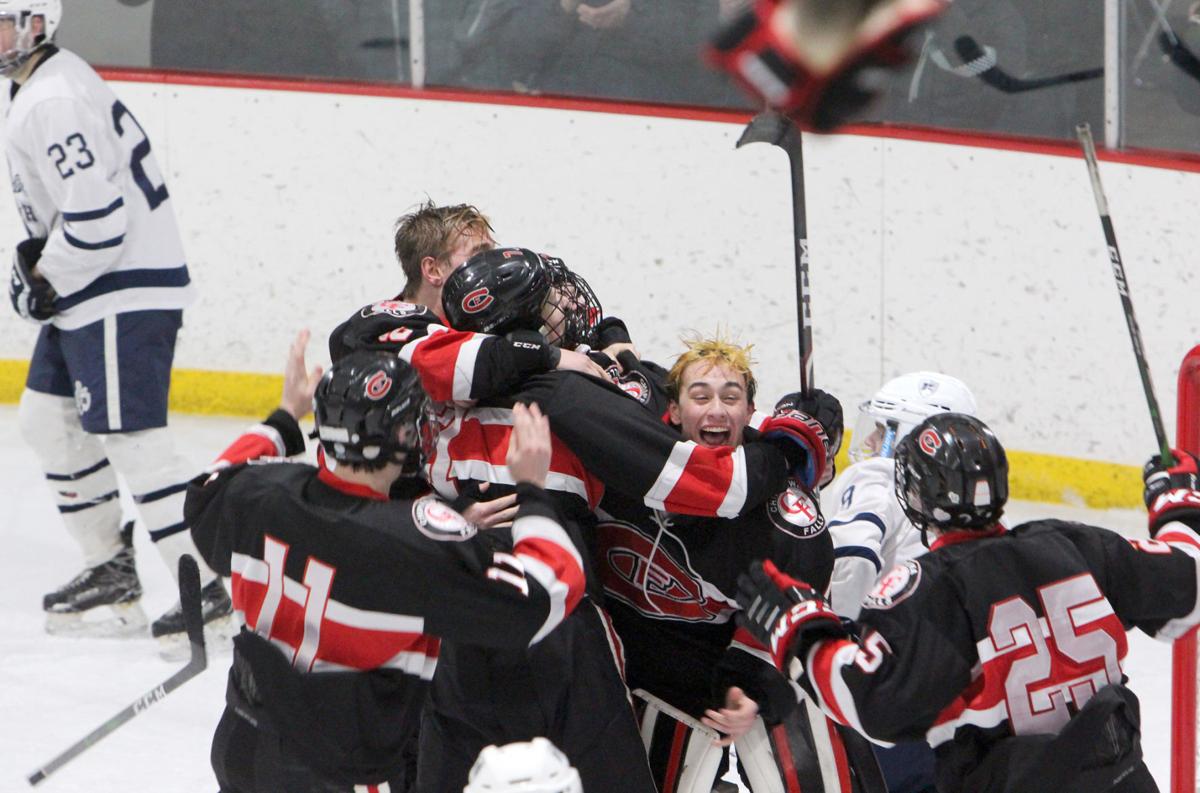 The Chi-Hi boys hockey team celebrates after defeating Hudson for a Division 1 sectional championship on Saturday afternoon in Wisconsin Rapids. 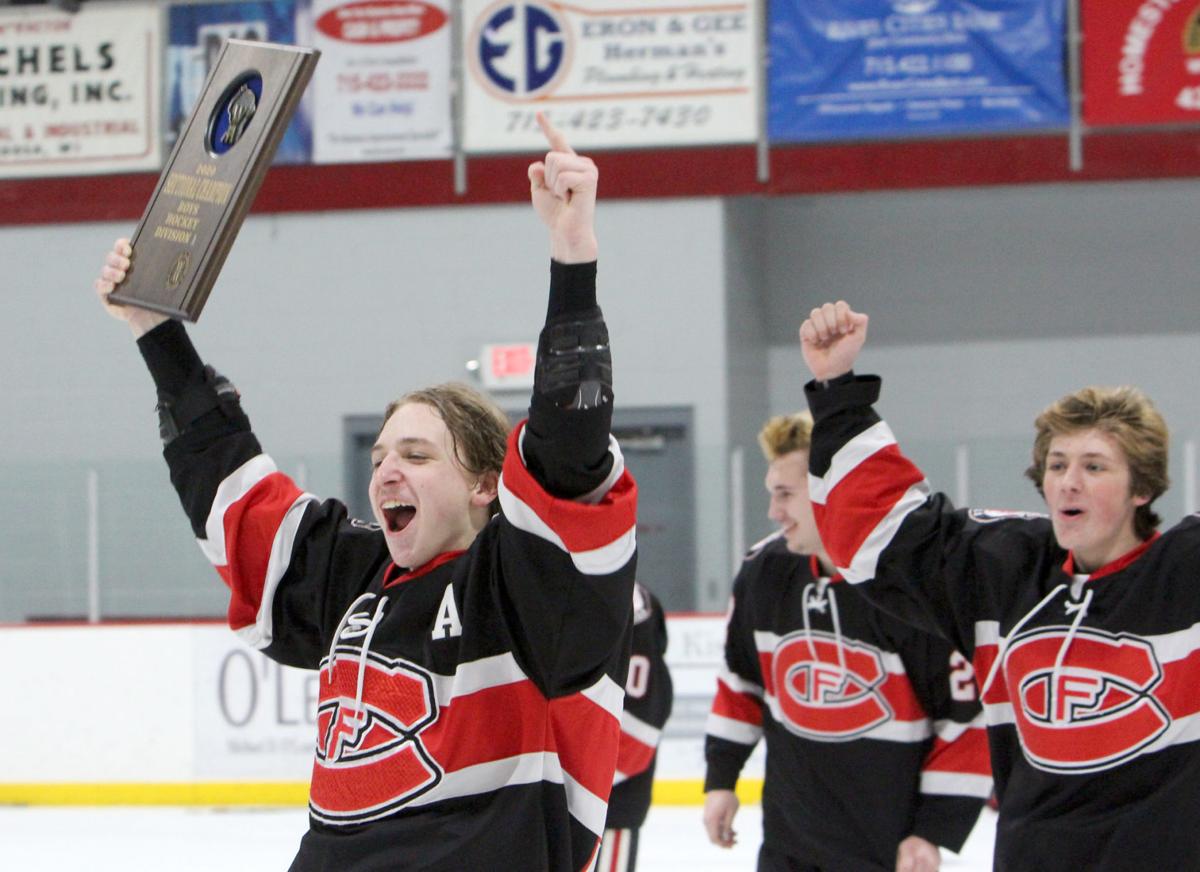 WISCONSIN RAPIDS — The Chi-Hi boys hockey team has knocked on the door of the state tournament in the 21 years since its last appearance.

The Cardinals beat the door down on Saturday as Cole Bowe’s power-play goal in the third period helped lift Chi-Hi to a 2-1 victory over Hudson in the Division 1 sectional finals in Wisconsin Rapids.

Chi-Hi (23-4) will be in action in the state semifinals next Friday in Madison against Verona at the Alliant Energy Center.

“I can’t believe it. I’m still in shock,” Chi-Hi coach Scott Parker said after the win. “It’s a combination of a lot of hard work, and all these guys that worked hard and listened and did what they’re told, they deserve all the credit. We just tried to point them in the right direction.”

Bowe’s go-ahead goal came early in the third after the Cardinals gained the man advantage following a Hudson penalty just past two minutes into the period. The senior defenseman has been limited to power-play duty in recent games because of a hamstring injury and made the most of his ice time in his team’s last man-up chance of the game, blasting a shot by Hudson goaltender Alex Ripplinger at the 3:07 mark with an assist from Isaac Frenette to put the Cardinals in front 2-1.

“It’s indescribable,” Bowe said of scoring the go-ahead goal. “I’ve been dreaming of this since my freshman year. I don’t have words. I’ve been battling an injury on my own, and I didn’t get a lot of shifts and I got out there, saw the puck coming, pushed over, took a shot and it went in.”

Chi-Hi played fast and physical throughout, but had to hold off the hard-charging Raiders (21-6) in the final minutes as Hudson peppered shots at goaltender Bridger Fixmer up until the final buzzer sounded. But the Cardinals survived and advanced to state for the first time since the end of the 20th century.

“That was probably the longest five or six minutes of my entire life,” Bowe said of the last half of the third period. “It just felt like an eternity. It was crazy.”

Both teams skated to a scoreless first period of physical and clean hockey. Neither team committed a penalty, and Fixmer stopped all nine shots he faced in net.

“We knew that was coming,” Parker said of Hudson’s early aggressiveness. “They’re a great first-period team, they like to put people away so getting through that … we had a few scares but we thought the one-man forecheck was going to work and at times it did and at times they went right around us.

“I give Hudson a lot of credit, they’re a very good hockey team. It seemed like for years it was Hudson or Eau Claire Memorial, and it’s nice to have Chippewa in the mix.”

Chi-Hi earned an early power play in the second period, but that opportunity turned into a 4-on-4 after a Cardinal penalty. Once the Raiders gained the man advantage, they wasted no time utilizing it as James Fremling banged home a shot in front of the net for an unassisted goal at the 4:18 mark to put the Raiders ahead 1-0.

But that lead would be short lived as Frenette returned the favorite more than a minute later when he knocked home his 31st goal of the season with help from Isaac Lindstrom and Sawyer Bowe to help send the game to the third period tied at 1.

Chi-Hi and Hudson split their two regular-season meetings as the Cardinals won the opening matchup 4-3 on Dec. 10 before the Raiders earned a 3-0 shutout on Jan. 16. Defensively, the Cardinals kept the Raiders pinned to the edges, and Fixmer did the rest between the pipes, stopping 24 of the 25 shots he faced.

“Obviously Hudson’s a very talented team, so we made sure to stick to the gameplan the coaches laid out and we did that,” Lindstrom said. “(We) played the body, kept it simple and nobody did anything outside their own abilities and it paid off in the end.”

Chi-Hi advanced to the sectional finals by winning at second-seeded Wausau West 8-1 on Tuesday and emerged from a brutal sectional featuring three of the top-six ranked teams in the state in the final Wisconsin Prep Hockey Division 1 state poll of the regular season.

The Cardinals earned a No. 2 seed for the four-team Division 1 state tournament and will meet the No. 3 Wildcats (23-4). Verona defeated Madison Edgewood 5-2 in Saturday’s sectional final and was ranked fifth in the final state poll. No. 1 Green Bay Notre Dame faces No. 4 University School of Milwaukee in the other semifinal with Chi-Hi’s matchup following the 10 a.m. first matchup of the day.

The Chi-Hi boys hockey team earned a No. 2 seed for the Division 1 state tournament and will face No. 3 Verona on Friday at approximately 12:1…

Check out a season's worth of Chi-Hi boys hockey stories leading into this week's Division 1 state tournament in Madison.

Strong work from the team's defensemen and goaltending are a big reason the Chi-Hi boys hockey team is heading back to state for the first time in 21 years.

The Chi-Hi boys hockey team celebrates after defeating Hudson for a Division 1 sectional championship on Saturday afternoon in Wisconsin Rapids.