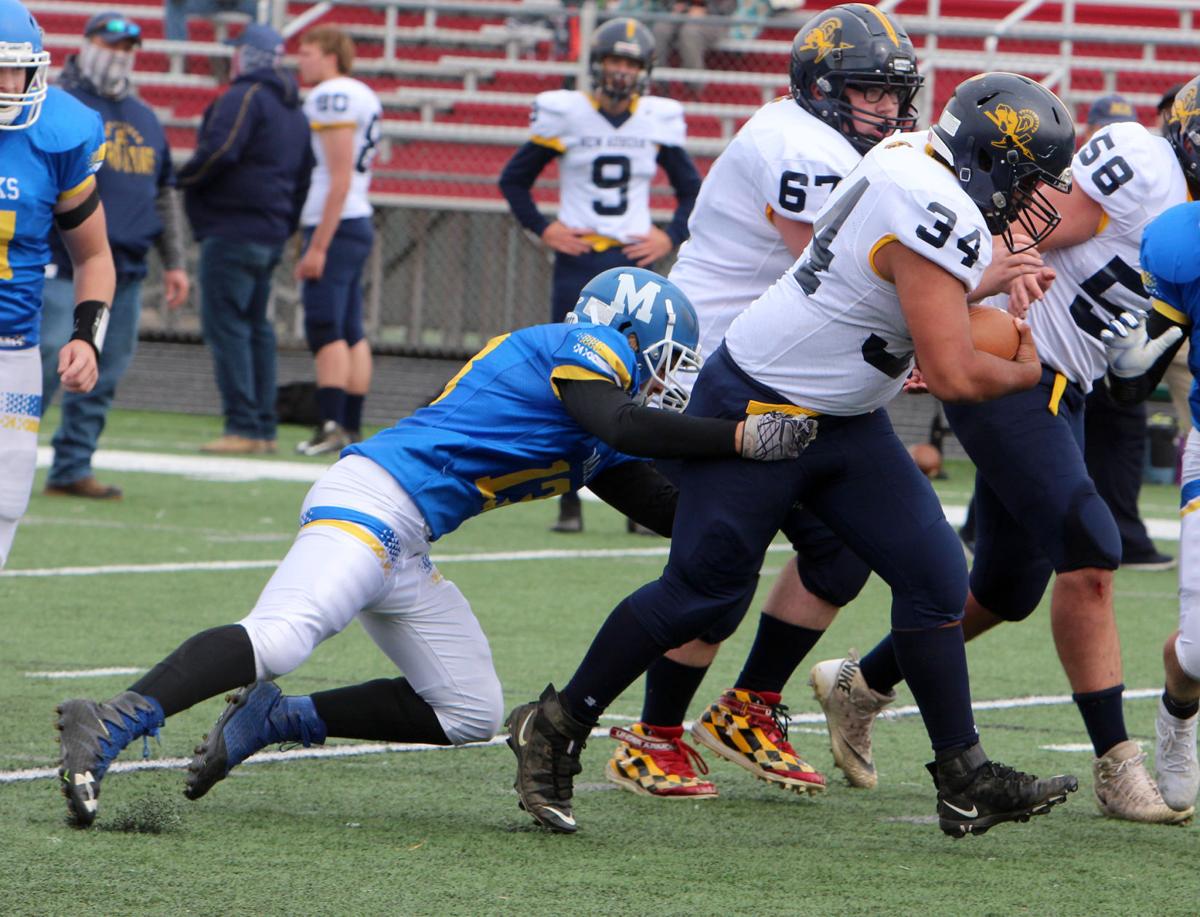 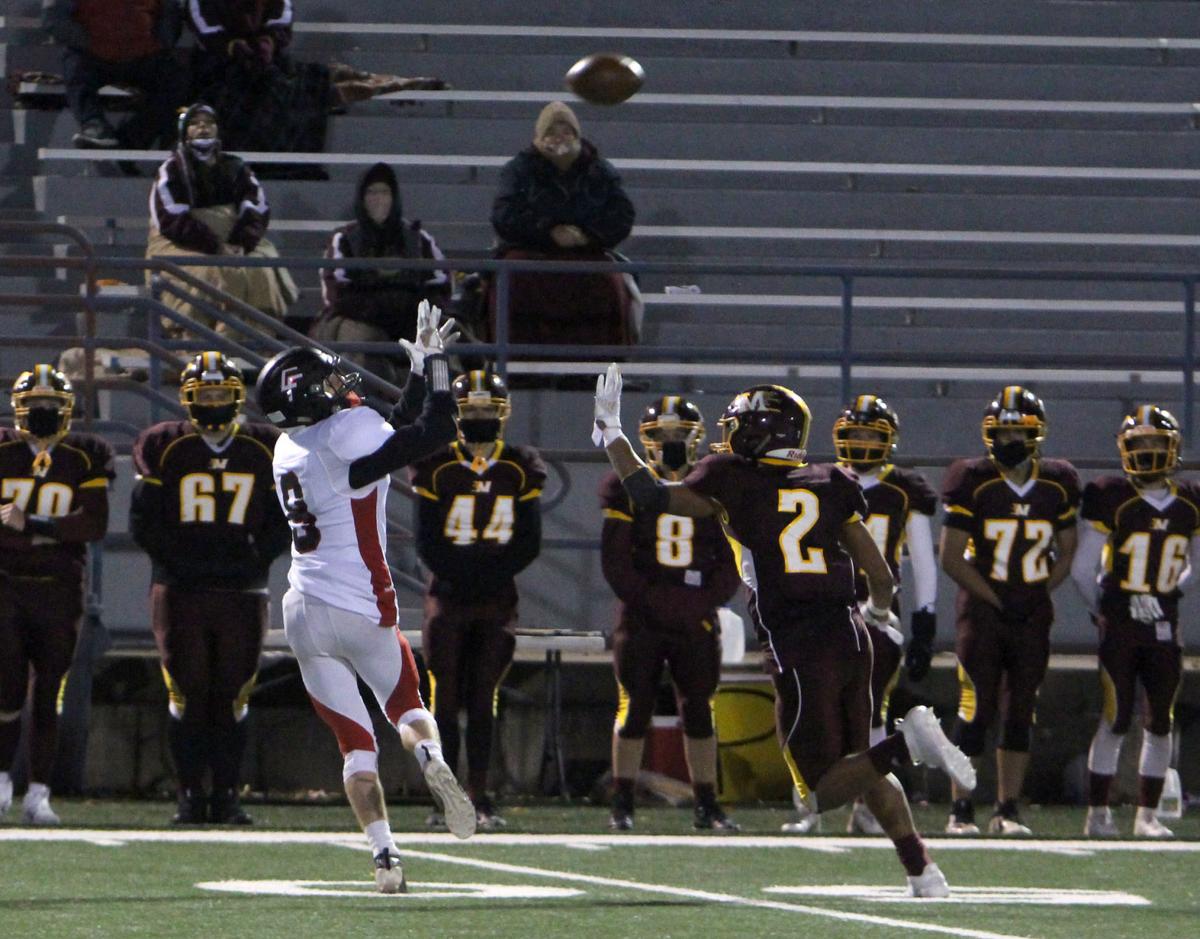 Chi-Hi's Isaac Frenette makes a catch on Friday in Menomonie. 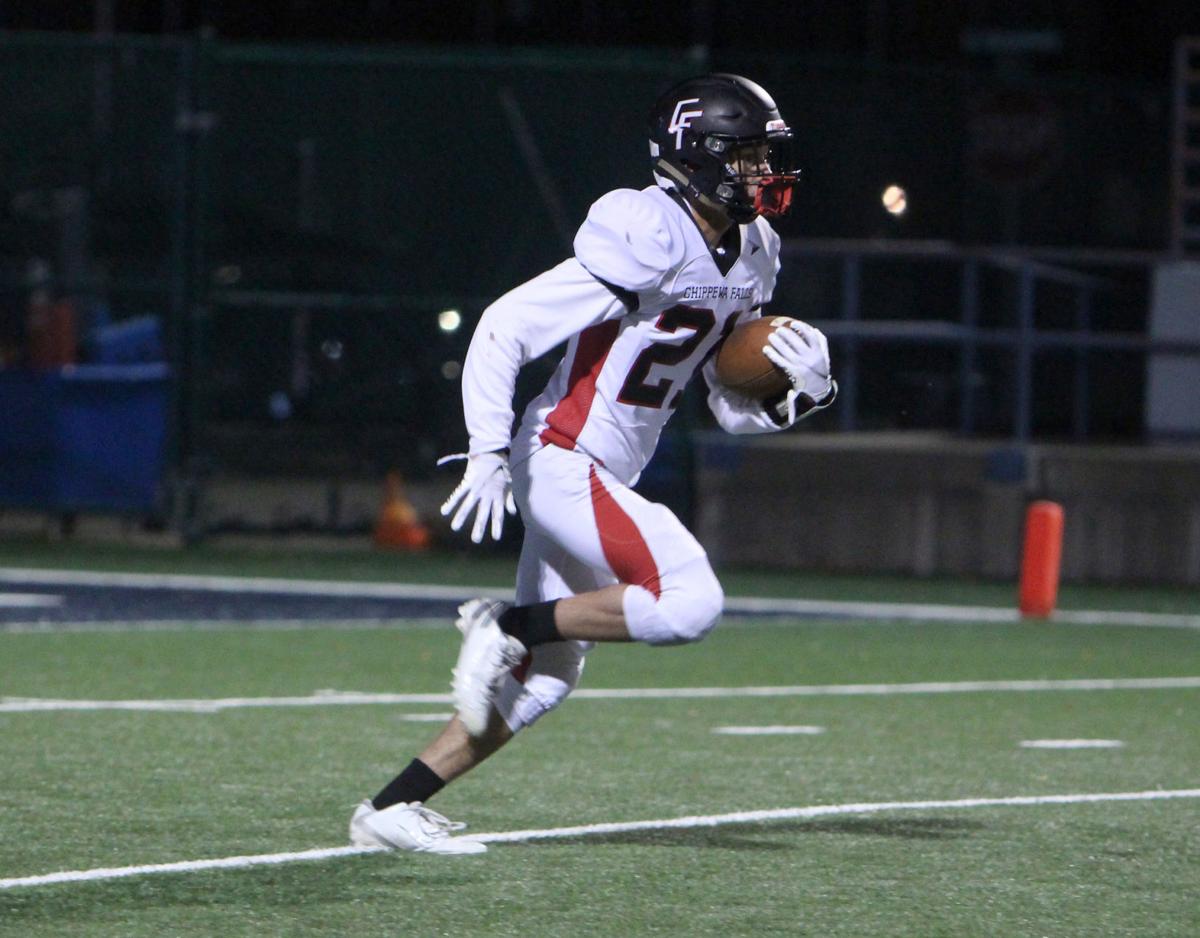 Chi-Hi's Bruce Sanborn returns a kickoff on Friday in Menomonie.

The prospect of securing a second win in a row didn’t look good early Friday evening for the Lake Holcombe/Cornell or New Auburn football teams.

Both the Knights and Trojans faced double-digit road deficits in the second quarter of their respective games before rallying to secure victories.

Lake Holcombe/Cornell trailed at Webster 26-8 entering halftime while New Auburn was behind Alma Center Lincoln 30-6 in the second quarter.

The Knights utilized a familiar script to take a win over the Tigers with plenty of running back Tate Sauerwein, who finished with 149 rushing yards and three scoring runs with two in the third quarter as his team surged to a 28-26 lead before holding on for the two-point victory. Colton Minnick added a two-yard scoring run in the 20-point third quarter as the Knights got back to the .500 mark with upcoming home games against Flambeau and Rib Lake/Prentice in the coming weeks.

New Auburn also utilized its ground game as the Trojans scored 36 of the final 42 points to earn a Central Wisconsin West Conference eight-man win. Nick Walker led the Trojans with 169 yards and three touchdown runs, Braden Johnson added 69 yards and two scoring runs, Zachary Fedie chipped in with 61 yards on the ground and Ethan Lotts opened the scoring with a 14-yard touchdown run in the first quarter.

A few too many mistakes hurt the Chi-Hi football team in a 24-6 defeat to Menomonie on Friday evening at Don and Nona Williams Stadium in Menomonie.

Chi-Hi has aired it out more than many Cardinal teams in recent years and senior receiver Isaac Frenette has proven to be a tough matchup for opponents.

Frenette had a game-high 11 catches for 169 yards and a touchdown for the Cardinals in a 24-6 defeat at Menomonie, continuing a strong start to the season. Quarterback Brayden Warwick completed 20 of 33 passes for 223 yards, one touchdown and two interceptions for the Cardinals, who outgained the Mustangs in total yardage by a 242-139 margin.

Big plays on defense and special teams were the difference for the Mustangs after two early offensive touchdowns. Devauntaye Parker ran back the opening kickoff of the second half 95 yards for a touchdown to extend the Menomonie advantage to 24-6 before the Cardinals scored on the first play of the fourth quarter, the first points allowed by the Mustangs in 11 quarters.

For the season Frenette has 19 receptions for 268 yards and two scores.

The Gilman football team jumped out to a 32-0 lead on the way to a 44-8 win over McDonell on Friday in a battle of Central Wisconsin West Conference unbeatens. Lake Holcombe/Cornell, New Auburn and Stanley-Boyd were also winners in the rest of Friday's action.

Something had to give when a high-scoring McDonell squad met a stellar defensive Gilman team in a key CWWC eight-man matchup in Gilman.

The Pirates defense won out, holding the Macks to one second-half score in a 44-8 victory to clinch at least a share of the league championship.

McDonell was coming off a 60-18 victory over Phillips a week prior, the most points scored in a single game for the Macks since moving the eight-man in 2018. But a Gilman defense that pitched three shutouts in the first three games was again up to the task, limiting standout quarterback Tanner Opsal to 190 yards through the air with one score and 91 yards on the ground. Receiver Dale Tetrault caught nine passes for 115 and a touchdown.

Offensively the Pirates flexed their muscle on the ground as Julian Krizan (175 yards) and Kade Kroeplin (104 yards) each broke the 100-yard barrier with Brayden Boie adding 70 yards of his own. Krizan ran for three scores and added a touchdown pass to Bryson Keepers.

Gilman hosts New Auburn this Friday and can grab the outright league title with a win over the Trojans. The Pirates also picked up a pair of nonconference games and will play at Clayton (Oct. 30) and Wausau Newman (Nov. 6).

Bloomer faced its third consecutive unbeaten opponent in a 35-34 loss at Spooner.

Brock Haseltine and Jack Strand each ran for two touchdowns and Strand added 204 passing yards and a touchdown pass to Vaughn Zwiefelhofer through the air for the ‘Hawks. Marcus Harelstad had a team-high 75 rushing yards for Bloomer while Jackson Barrett had 97 yards and a scoring run for the Rails.

Technically Friday’s game with the Rails marked the fourth week in a row the Blackhawks faced a team with no losses — Bloomer opened the season with a 34-28 overtime win at Saint Croix Falls, who was 0-0 entering the game.

The team’s run of unbeaten foes ends this Friday when Bloomer hosts 2-2 Barron.

Take to the air

Stanley-Boyd and Elk Mound have strong histories as programs that run the ball well.

But Friday’s 23-7 victory for the Orioles was contested primarily through the air with all four touchdowns scored on pass plays. Cooper Nichols caught six passes for 174 yards and two scores and Michael Karlen added 73 receiving yards on three catches and a touchdown from quarterback Carsen Hause as the junior signal caller was 10 of 16 for 247 yards.

Elk Mound quarterback Ryan Bohl threw for 166 yards and a second-quarter score to Carsen Steinhorst, a touchdown that gave the Mounders a 7-6 lead before the 93-yard connection from Hause to Nichols later in the second.

The Hornets scored all 20 points in the final quarter of a 20-14 victory at Glenwood City on Oct. 9 and in last Friday’s 12-7 defeat at Clear Lake the Hornets scored their lone touchdown with a 17-yard touchdown pass from Gavin Tegels to Nolan Blum. The score game the Hornets a 7-6 lead before the Warriors retook the advantage a minute later.

Cadott is back in action unbeaten Spring Valley on Friday.

The Lake Holcombe/Cornell football team started the season with a pair of lopsided losses, but has gotten back on track in recent weeks and coach Brandon Baldry believes his team is 'dangerous' entering the homestretch of the regular season.

Chi-Hi's Isaac Frenette makes a catch on Friday in Menomonie.

Chi-Hi's Bruce Sanborn returns a kickoff on Friday in Menomonie.