Virus in review: US states share, get creative in hunt for medical supplies. Get the latest here.

Round one went to the Clear Lake girls basketball team.

Time will tell if and when round two may occur.

The Warriors pulled away from McDonell to earn a 75-58 nonconference victory on Monday at McDonell in a battle of potential Division 5 sectional heavyweights.

Madison Zimmer scored 20 points for Clear Lake (4-0) while Lauryn Deetz led all scorers with 25 points for McDonell (2-1). The Macks were outscored 42-25 in the second half after the teams battled to a 33-33 tie at halftime.

“I’ll take the building blocks,” McDonell coach Don Cooper said. “I loved the energy that those girls played with tonight. That was just phenomenal.”

Julianna Rosen scored all 14 of her points in the second half as the Warriors embarked on a 11-2 run to help grab a double-digit lead at 52-40 Clear Lake would not relinquish the rest of the way. The 6-foot senior Rosen and 6-foot sophomore Maddie Rosen controlled play near the basket on offense, finishing often from close range with a low-post presence the Macks simply could not slow down. The senior Rosen also went over the 1,000-point mark for her career in the win.

McDonell was plagued with foul trouble throughout the game, committing 30 total fouls in the contest. Clear Lake was in bonus fewer than seven minutes into the game and spent the final 9:13 of the first half in the double bonus and for the game went 25-for-40 at the charity stripe.

“We’ve got to do a better job with defense,” Cooper said. “Really we fouled too much. That’s the difference. We’re inexperienced and hopefully we’ll mature by the time we’ll play them again.”

The Warriors jumped out to a 28-20 lead following a back-and-forth start, but the Macks mounted a charge to close the gap heading into the half. A 10-0 run with five points apiece from Deetz and Maggie Craker pushed McDonell in front 30-28 with 1:12 left before halftime.

Julianna Rosen scored the first six points of the second half for the Warriors as they opened up their advantage.

The veteran Warriors were able to work through McDonell’s variety of press defenses, leading to scoring chances near the basket. Clear Lake’s zone defense made life difficult for the Macks, forcing McDonell to be patient as they looked for an open shot.

“That’s what their athleticism does. They basically make you make the extra pass is where we had too many turnovers and not enough shot attempts,” Cooper said of Clear Lake’s defense.

The Warriors knocked the Macks out of the playoffs last year in the regional semifinals and Cooper said while his younger players showed their inexperience at times, Monday’s contest was a great experience builder for the coming weeks and months. The schedule gets busy for McDonell in a hurry as Monday’s game was the first of four this week. The Macks have Western Cloverbelt games at Thorp on Tuesday and at home against Fall Creek on Friday before facing Wisconsin Rapids Assumption at the Bishop John Paul Showcase in La Crosse on Saturday.

“The main thing now is we have a big stretch here of a number of games. (We want to) keep everybody healthy, we got a lot of girls in the game which was a big plus for us,” Cooper said. “To get a big game like this underneath their belts really helps.” 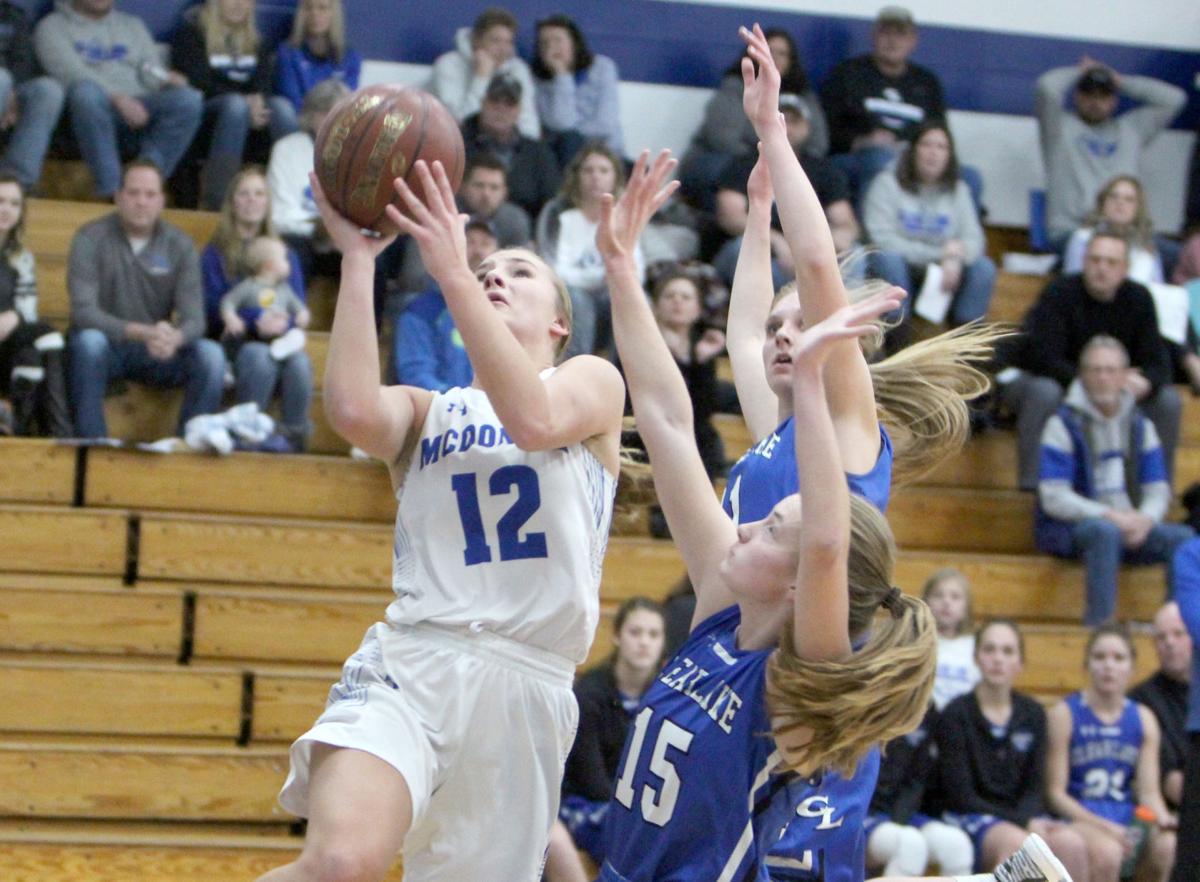 McDonell's Maggie Craker goes up for a shot in traffic against Clear Lake on Dec. 9 at McDonell. 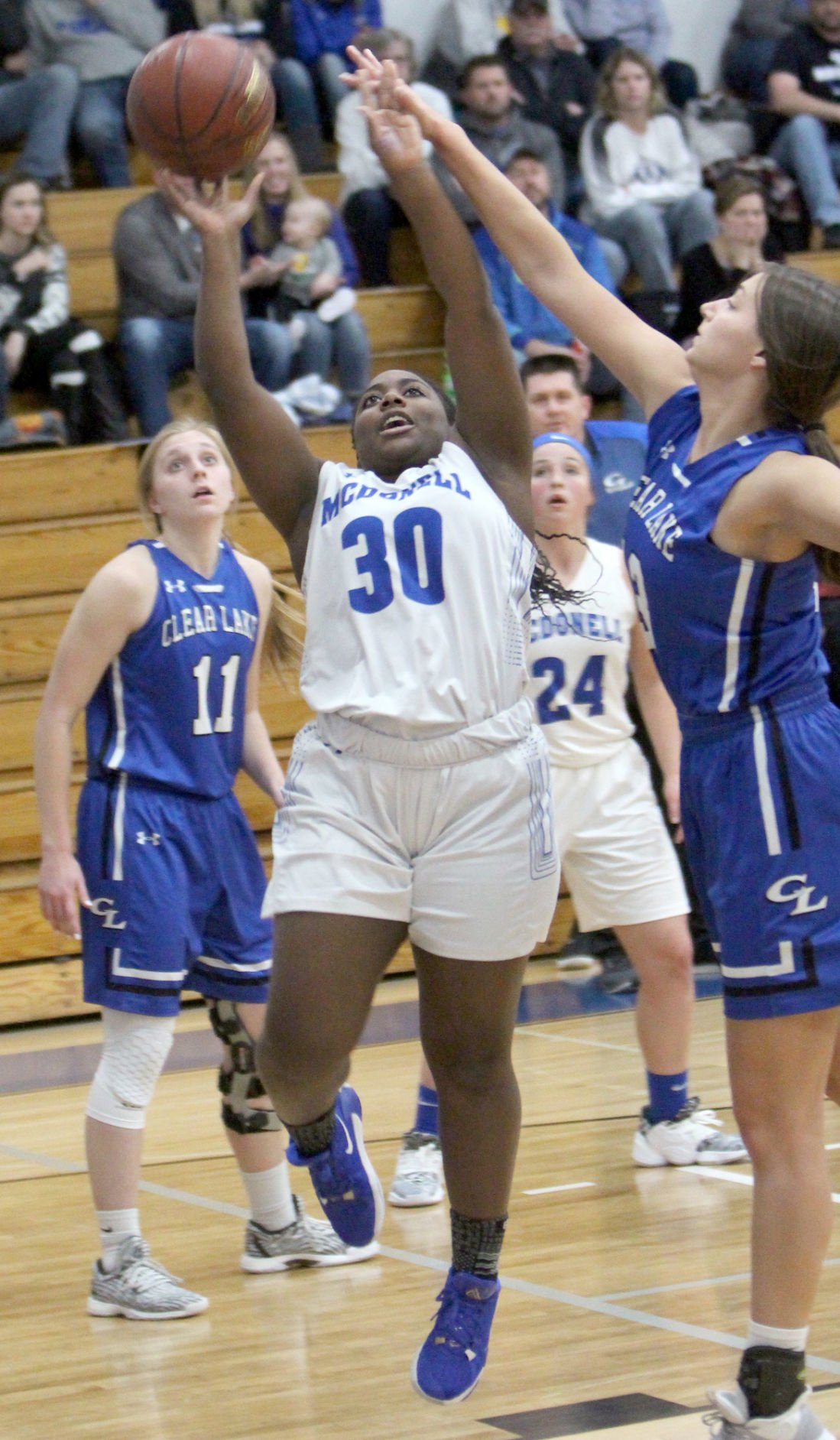