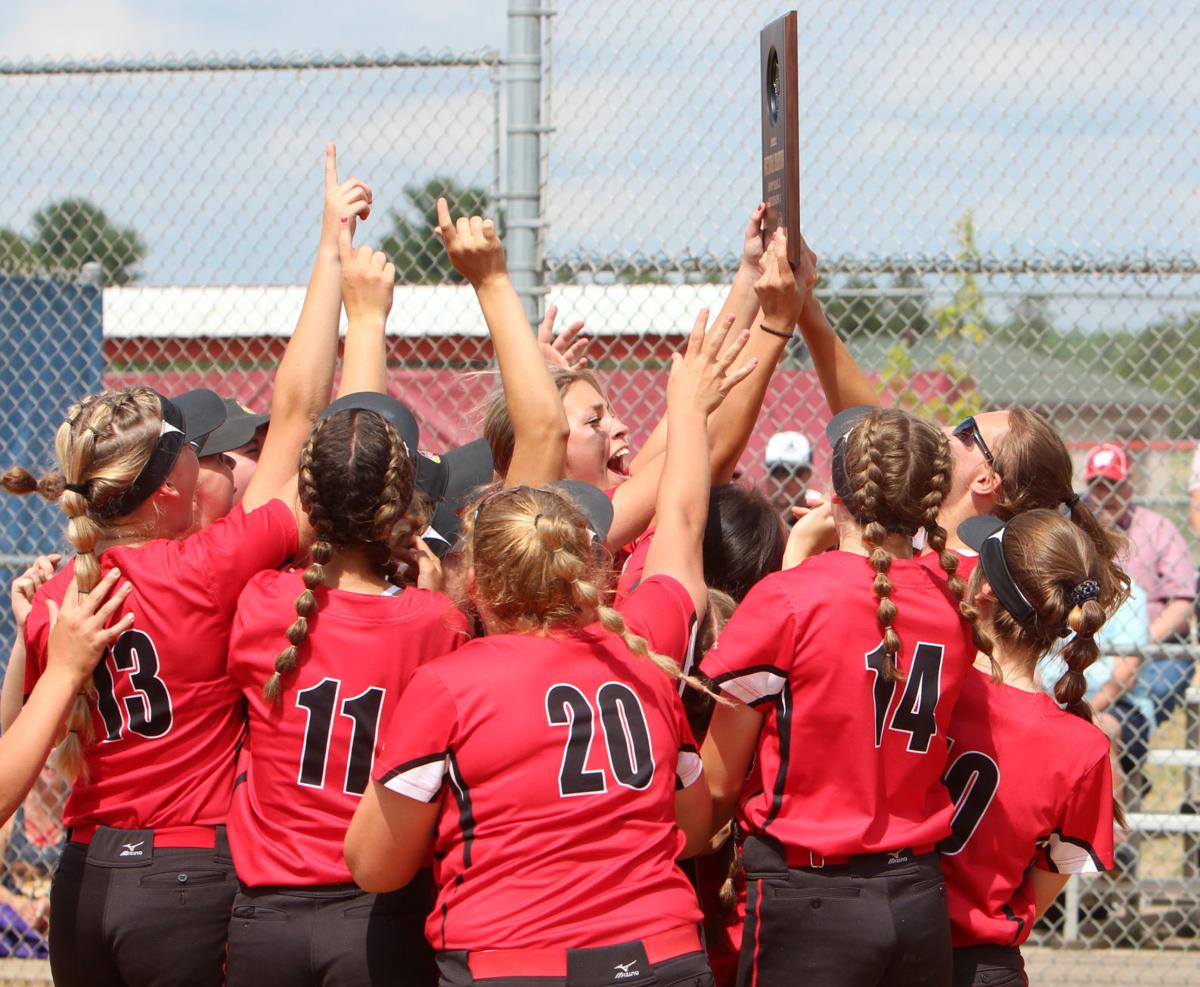 The Chi-Hi softball team celebrates with its Division 1 sectional championship plaque after defeating Marshfield on Wednesday at Casper Park. 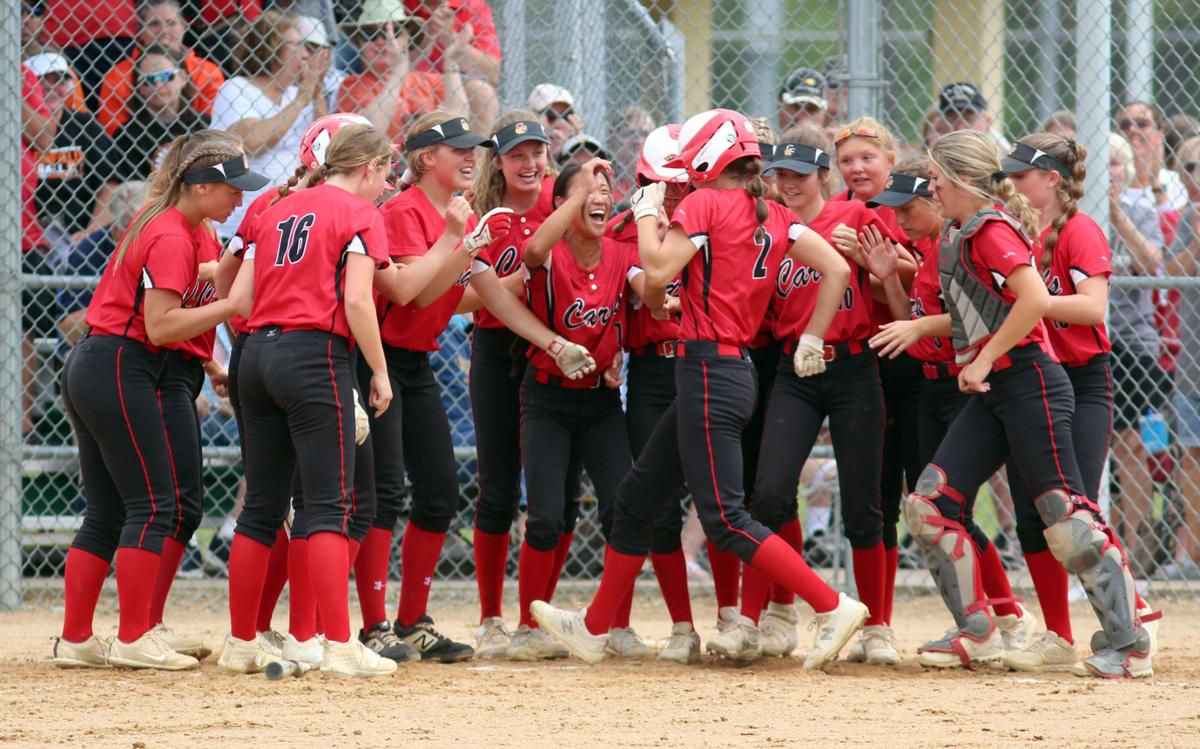 And right now the Chi-Hi softball team’s offense has plenty of both.

The Cardinals scored in each of the first six innings of a 12-5 Division 1 sectional championship victory over Marshfield on Wednesday afternoon at Casper Park. Chi-Hi (24-5) advances to next week’s state tournament, which will begin on Monday in Green Bay.

A relentless offense scored the final eight runs of the game as the Cardinals overcame a brief 5-4 deficit with one run in the fourth before four in the fifth and three more in the sixth to finalize the 14th trip to state in program history. Paige Steinmetz and Olivia Sanborn were each 4-for-4 as Chi-Hi tallied 18 hits and cracked a pair of home runs. Madyson Baker’s two-run blast in the fifth inning helped cap a four-run frame and Steinmetz drilled a two-run shot of her own in the third inning.

“When you have strong hitters one through nine it makes innings really, really tough on other pitchers,” Chi-Hi co-coach Chelsea Seckora said of the offense. “We constantly are putting pressure on one through nine and that just wears the pitcher out over time and gives you options to score every single inning.”

Olson’s RBI single opened the scoring for the Cardinals in the first before Marshfield (15-7) answered in the top of the second on a solo home run by Taylor Barwick. Makenna Johnston put the team out front in the second on a run-scoring single before Steinmetz’s homer extended the lead to 4-1 in the third.

Marshfield grabbed its lone lead of the contest in the top of the fourth when Brooklyn Bohman connected on a three-run homer out of the nine spot in the batting order to put the Tigers out front 5-4. The lead didn’t last long as Olson tied the game on a sacrifice fly that could’ve been more as Marshfield right fielder Shylah Brogan made a home run-robbing catch at the fence that would’ve scored three but still brought Baker home from first.

Sanborn scored one on a single before Makenna Johnston’s sacrifice fly added another in the fifth with Baker’s towering blast to left-center field capping the four-run frame. Steinmetz, Sanborn and Johnston each had an RBI in the sixth to provide all the cushion the Cardinals would need.

“One through nine we took good approaches at the plate and hit the ball hard most of the night,” Chi-Hi co-coach Jared Faherty said of the offense.

Hannah Aldrich pitched the first five innings for Chi-Hi, striking four while allowing five runs on seven hits to earn the victory. Lakken McEathron threw two scoreless innings to close the win with the final outs coming in unique fashion. Marshfield had a runner on second with one out when Madalen Bornbach roped a line drive to deep center field that Steinmetz was able to corral after the ball initially popped up in the air after hitting her glove before she secured the catch.

Steinmetz made the throw base to the infield and runner was initially thought to have have been doubled off second base, triggering a celebration from the Cardinals. The officials discussed the play and ruled the runner safe back at second with two outs and McEathron retired the final batter of the game on a grounder to spark another celebration.

Chi-Hi and Marshfield split a doubleheader on May 20 and since then the Cardinals have just lost twice, two defeats by a total of three runs to Hudson near the end of the regular season. The Tigers earned their way into Wednesday’s matchup with a 7-4 win over perrenial power Stevens Point on Monday after knocking off top-seeded D.C. Everest 10-2 in last week’s regional finals.

“They came from a really, really good regional and they were beating really great teams so we had that in our minds too that they came in having some very, very, very good teams,” Seckora said. “We knew that they were going to be bringing it.”

Wednesday’s win marked the second double-digit scoring effort of the week for Chi-Hi, who outlasted Hudson 10-9 on Monday in the sectional semifinals. Seckora and Faherty are in their first season as co-coaches with the program and have seen a deep, athletic and young group of players grow quickly as the Cardinals qualified for the state tournament for the third season in a row with appearances in 2018 and 2019 prior to last season being canceled amid the COVID-19 pandemic.

Chi-Hi will learn its opponent for Monday’s state quarterfinals on Thursday evening and will open competition on either Monday morning or early afternoon at Bay Port High School with semifinals also being contested the same day before the Division 1 title game on Wednesday.

“It definitely could not feel any better,” Sanborn said of going to state. “It’s so exciting. I know it was a little rough, we celebrated a little early but once we finally got that out it was pretty exciting.”

Olson has been part of the RiverHawks' staff for the past six seasons and served as defensive coordinator this past season.

The Chippewa Steel focused its NAHL Draft efforts on offense — including selecting Eau Claire Memorial grad Joe Kelly — as the team prepares for next week's main camp in Chippewa Falls.

The University of Wisconsin commit was the WIAA Division 1 state tournament champion.

No news is good news so far for area prep sports coaches and athletes.

He finished an undefeated season with the WIAA Division 2 state championship.

The Chi-Hi softball team celebrates with its Division 1 sectional championship plaque after defeating Marshfield on Wednesday at Casper Park.