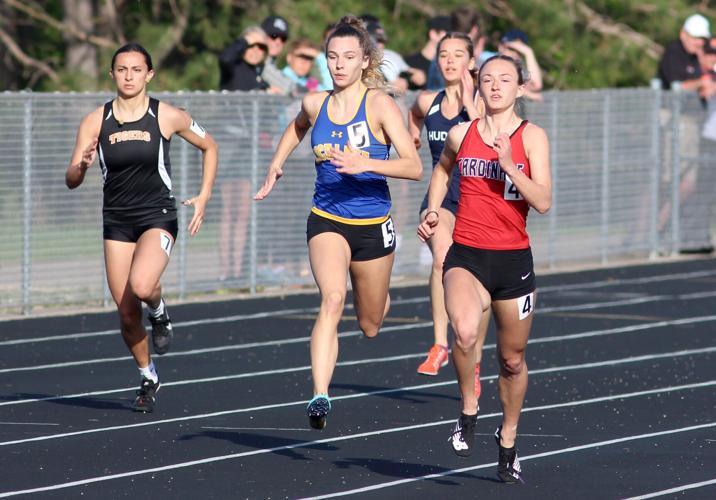 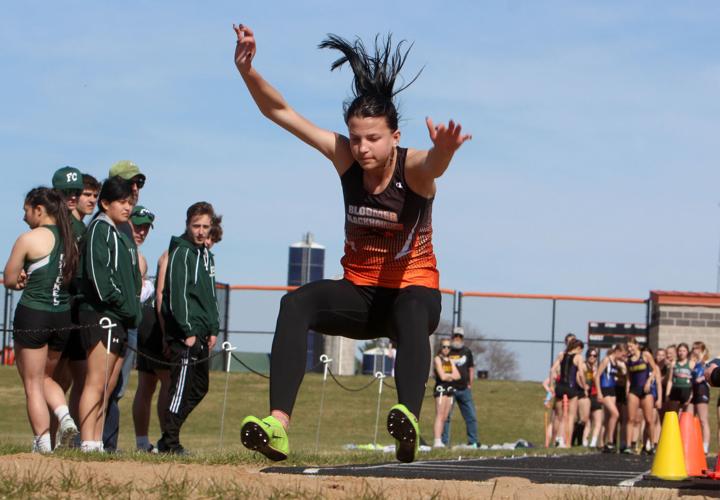 Bloomer's Alexa Post makes a long jump attempt at the Oriole Invitational on May 6 in Stanley. 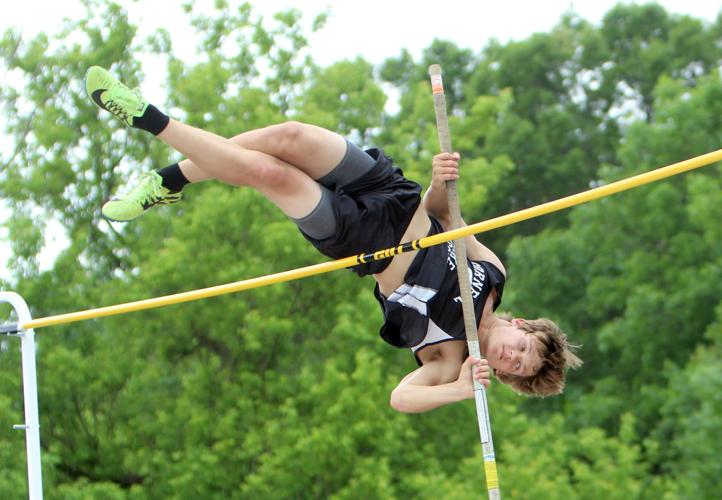 The prep track and field postseason begins Monday statewide as athletes from around Wisconsin look to make it to the state championships in La Crosse.

Chippewa County has no shortage of strong competitors who could be in line for trips to state.

Any talk of the county’s track and field athletes begins with Chi-Hi’s junior phenom. Sandvig is coming off a historic performance last Monday at the Big Rivers Conference championships, where she set four meet records in victories in the 100-, 200- and 400-meter dashes and the long jump. Her efforts Monday were also 11th or better in state history, according to Wisconsin Track Online. The defending Division 4 state champion, Sandvig enters the postseason with the top performances statewide in the 100, 200 and 400 and is second to Oak Creek’s Rachel Blaskowski in the long jump.

Wagner won the 1,600 and finished a close third in the 3,200 at Monday’s Big Rivers Conference championships and should be a threat in the distance races as he looks to continue a stellar senior sports season. Last fall, Wagner finished in 34th place at the Division 1 state cross country championships and has carried that momentum over into the spring and is second on the county honor roll in both the 1,600 and 3,200.

Warwick swept the hurdles at Monday’s Big Rivers Conference championships and is looking to make a return trip to La Crosse in the events. The senior posted his best times of the season on Monday and won a 300 hurdles sectional championship a season ago while finishing second in the 110. Warwick will compete in both football and track and field in college at UW-Eau Claire as he looks to improve upon last year’s efforts, where he took 13th at state in the 110 and 19th in the 300.

Anderson already owns one of the fastest Division 3 3,200 times in state history after logging a 9:18.74 at Hale Distance Night in a meet hosted by Nathan Hale in West Allis on April 29. That time has him within 12 seconds of the state record time of 9:07.62 set by Eau Claire Immanuel’s Darin Lau in 2014. Anderson was seventh in the 1,600 and 10th in the 3,200 at state last season running both in the same day and should be a threat to finish high in either before he heads to college to run at UW-Whitewater.

Baughman just missed out on a pair of podium finishes at state a season ago and should be looked upon as someone that could move up the standings in jumps this year. The St. Cloud State commit owns the school triple jump record and was seventh at state last year, missing sixth place by 1 inch. She was also tied for ninth in the high jump and performed strong at Tuesday’s Western Cloverbelt Conference championships as she won the triple jump, took second in the long jump and tied for third in the high jump.

Flanagan ranks among county leaders in sprints and jumps — no easy feat considering the talent and depth from programs like Chi-Hi and Bloomer. The senior won the 100 at the Western Cloverbelt championships and was fifth in the long jump. She and Baughman are seeking to advance to state in all three sports seasons after both were a part of last fall’s Division 4 state volleyball championship and the winter’s Division 5 state girls basketball qualifier.

Michaelsen leads a strong group of distance runners for the Blackhawks. The sophomore teamed up with Lucas Anderson, Gavin Gehring and Jaden Ryan to take second at the Western Cloverbelt championships, where he also won the 800 and was second to Anderson in the 1,600. Michaelsen sits fourth on the county honor roll in both the 800 and 1,600 behind the likes of Anderson, Chi-Hi’s Benjamin Cihasky, Ryan Bernaek and Lukas Wagner and his teammate Anderson coming into the postseason.

Post already owns two Division 2 state championships from 2019, when she teamed with her older sister Grace, Maggie Sarauer and Vanessa Jenneman to win the 400 and 800 relay titles as a freshman. Now a senior, Post is chasing individual glory as a potent competitor in the sprints, jumps and hurdles. The Minnesota State-Mankato signee will compete in the heptathlon in college and has shown that versatility throughout the spring. She broke her sister’s school record in the long jump earlier this month and was two spots away from advancing to state in the 300 hurdles and long jump in 2021.

Messenger can be found around the county honor roll in the jumps and was found near the front of the pack at Tuesday’s Western Cloverbelt championships. The senior took second in the high jump, third in the 110 hurdles and fifth in the triple jump to cap the regular season. Last season, Messenger advanced to sectionals in both the 110 hurdles and triple jump and has already posted better times and distances than he did at sectionals a season ago.

The senior won the Western Cloverbelt high jump championship on his home turf last Tuesday with a top height of 5-10 and has cleared 6-0 already this spring and has been consistently strong. Hause advanced to sectionals a season ago in the 300 hurdles and just missed out in the high jump.

Nichols has state experience after taking 15th in the Division 2 400 dash last spring. The senior was strong in the one-lap race again this year and took second at the Western Cloverbelt championships, but the state ticket for him and teammate Zack Boes might come in the pole vault. Both competitors tied for the conference championship after clearing 11-6 and are among four county athletes to clear 12 feet this spring.

Anders sits second behind Chi-Hi’s Christian Crumbaker on the county triple jump leaderboard with a best leap of 39 feet. He came close to matching that mark at the East Lakeland Conference championships, and anything in that ballpark would have him in the hunt for a trip to state.

Lechleitner has put together a strong season for the Knights heading into the postseason. The sophomore is second to Post in the 300 hurdles with a time of 50.43 she put down in winning the East Lakeland Conference championship on Tuesday. That time would have placed Lechleitner fifth at Division 3 sectionals a season ago and on the doorstep of advancing to state.

Another pole vaulter who has cleared 12 feet this spring, Turany is another Knight to watch in the postseason. Turany finished tied for 10th as sectionals a season ago and was also a part of a conference-winning 800 relay with Daniel Person, Dylan Bowe and Anders. Turany, Bowe and Anders qualified for sectionals in the 400 and 800 relays in 2021.

Robey was painstakingly close to advancing to the Division 3 state championships a season ago, one spot away with a fifth-place finish in the pole vault. The UW-Stout commit as hit the 12-foot mark several times and will look to end his prep career on a high note as he aims for La Crosse in the event.

Johnny Davis will have his life changed forever on Thursday.

The WIAA Board of Control made other wrestling changes after reviewing coaches’ committee recommendations that affect winter sports at its meeting Wednesday, but it didn't review the basketball shot clock issue.

Here's what to know about the WIAA state softball tournament

Sun Prairie, Poynette and Horicon are among the teams in this year's state softball tournament. Here's a breakdown of this year's field.

U.S. swimmer rescued by coach after fainting at world championships

Bloomer's Alexa Post makes a long jump attempt at the Oriole Invitational on May 6 in Stanley.