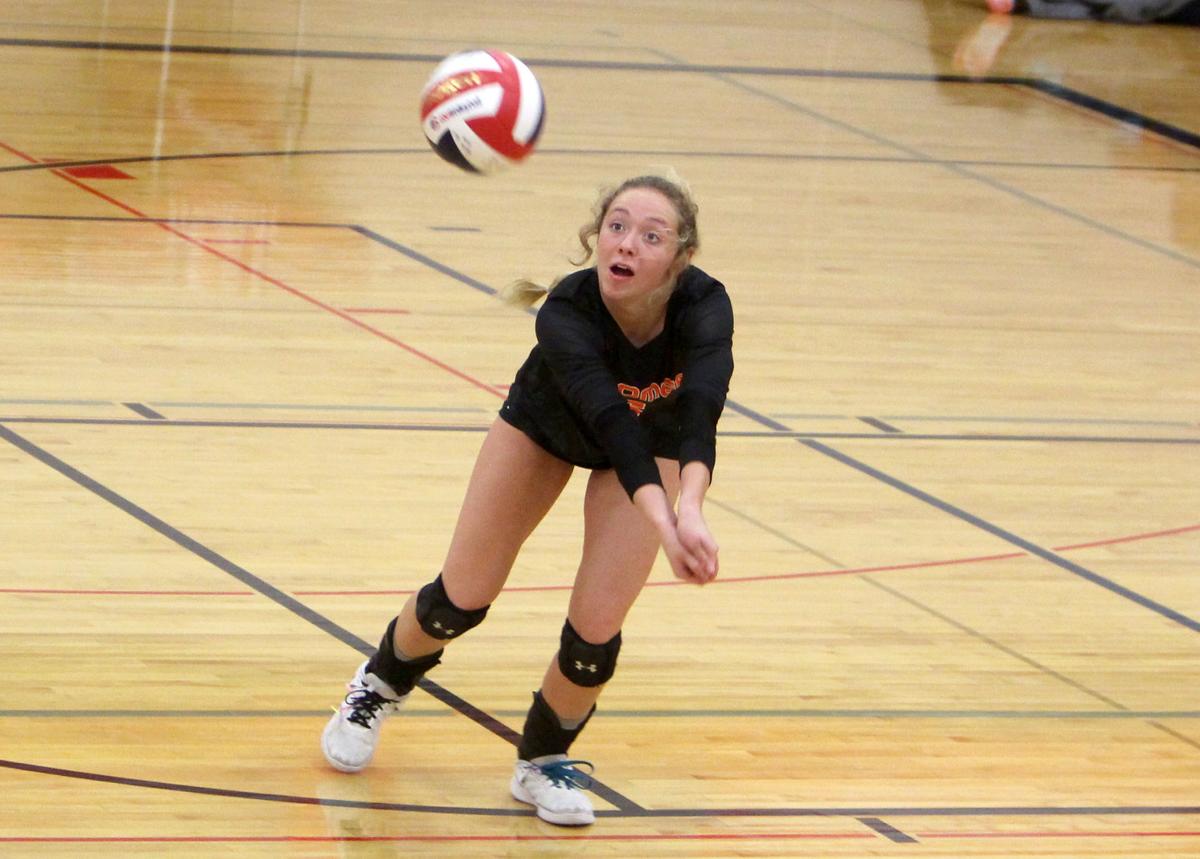 Bloomer's Josie Kostner lunges for a dig during a tournament in Bloomer last season. 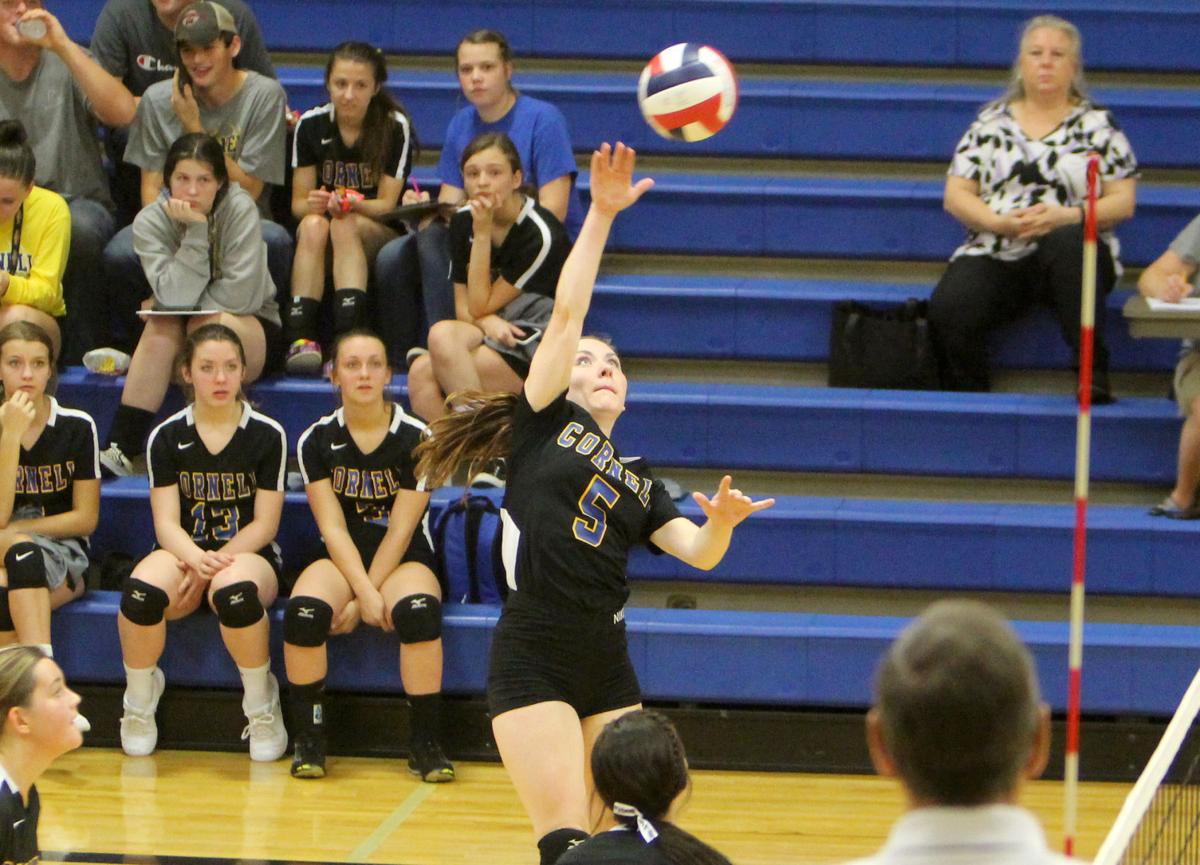 The Bloomer volleyball team will look to blend some new faces with some returning standouts during its encore from last year’s Division 2 state tournament appearance.

The Blackhawks bring back five letterwinners for eighth-year coach Liz Bohl and a set of newcomers will work their way into the lineup in all phases of the game to try to help replace a strong graduated senior class that helped guide the ‘Hawks to state for the first time in program history.

Libero Josie Kostner will anchor the Blackhawks’ defense after a strong junior season that left her with no shortage of accolades. Kostner led the Blackhawks with 518 digs and was a 94 percent server with 36 aces while earning first team all-Chippewa County and all-Heart O’North honors as well as Division 2 all-state honorable mention.

Senior middle Megan Bischel had 93 kills and 68 blocks in her junior campaign, and Bohl expects Bischel to match up against the opposing team’s best hitters and be a key piece of the offense and defense.

Senior hitter Nicole Brue had 33 blocks and 53 kills, junior hitter Lexi Post registered 130 kills and 41 blocks, and hitter Bella Seibel came on strong at the end of the season with 37 kills and 24 blocks.

Add in juniors Madison Faschingbauer, Paige Jacobs and Leah Bleskacek along with freshman setter Ameilia Herrick, and the Blackhawks have a team Bohl believes will need to rely on balance to maintain its high level of play this fall following some significant departures.

“This season we will (have) another year where some inexperienced players will be expected to step in and make an impact,” Bohl said. “We have five returners from last year’s state qualifying team, so I will lean on them to teach our newer players the ropes. I expect we will have some growing pains. However, I feel this year’s team will again be an athletic, talented, strong group of players that is ready to take their turn on the varsity squad.”

Bloomer opens the season Thursday at Cumberland before hosting Chetek-Weyerhaeuser on Tuesday in its home opener.

The Hornets bring back experience and ability up front as Cadott aims to move its way up the standings in the always-challenging Western Cloverbelt Conference.

Junior middle hitter Makenna Barone is back after earning all-conference honorable mention honors in 2019 with 201 kills and 68 blocks. The 6-foot-2 Barone makes life difficult for opponents at the net, and coach James Bremness said she will be looked upon as a leader and impact player up front.

Senior outside hitter Jada Kowalczyk had 156 kills and 58 aces a season ago and returns for her third varsity season with Bremness lauding Kowalczyk’s work ethic and positivity. Sophomore libero Lauryn Goettl earned all-conference honorable mention after a freshman season with 349 digs in anchoring the defense. Sophomore outside hitter Elly Eiler earned experience as a freshman up front and will be depended upon to take a step forward up front.

Senior Haylee Rowe takes over at setter while fellow senior Lexxie Rowe will step into the opposite position. Senior Hailey Wellner and junior Olivia Goodman will compete for attacker roles.

“I think we will be more competitive this season compared to previous seasons,” Bremness said. “Our returning varsity starters are hungry for wins and for big wins over teams we haven’t beat in years.

“Their hunger is contagious, and the newcomers are catching that fire as well. Everyone is on the same page when it comes to the competitive and work ethic standard it’s going to take to be one of the best teams in the conference.”

Cadott started the season at Neillsville on Tuesday before it hosts Altoona to start conference play Thursday.

The Orioles lost zero seniors from last year and bring back a team a year older, stronger and ready to battle in the Western Cloverbelt.

Second team all-conference hitter Emily Brenner had 194 kills a season ago and is joined by Lily Hoel (162 kills) and Kayte Licht (357 digs) as parts of a young nucleus. Sophomore setter Kaden Drehmel is expected to take on that role within the Oriole offense for a team still relatively young with just four seniors — Kailyn Schillinger, Taylor Schuebel, Hannah Hause and Aaliyah Moore.

“We are a young team with only four seniors on the roster,” Stanley-Boyd coach Rainy Antolak said. “However, we have good talent and an extremely positive team attitude.”

The Orioles open the season on Thursday at home against Thorp.

The Chiefs will be banking on the leadership ability of a few of its upperclassmen to lead a sophomore-dominated roster this fall for fifth-year coach Amy Lorenzen.

Veterans Alyssa Helland, Michaiah Galster and Jayda Turchen are the top returners for Cornell. Lorenzen credits Helland for leadership on and off the court, Galster will take over as a setter after being limited with injuries in recent years, and Turchen is back as an outside hitter for the team.

Cornell has 10 freshman players this fall, a group Lorenzen says is strong all-around and can help the program compete for a high position in the East Lakeland Conference standings.

“We lost a set of offensive leaders, but I am excited about the talent that we have this season and am confident those spots will be filled,” Lorenzen said.

Cornell kicked off the season by hosting Birchwood Tuesday and plays at New Auburn on Thursday.

The Chieftains can often be found among the top teams in the East Lakeland Conference, and with eight returning letterwinners, the program is seeking another run to a conference title.

Setter Allison Golat-Hattamer is back after earning second team all-conference honors a season ago to move the offense. Leah Allard also earned second team honors for her play at the net and sixth-year coach Beth Meddaugh expects her to be a leader for the program.

Newcomers Megan Luethi, Karly Kirkman and Jadyn Larson will help the team at defense and at the net to go with seniors Jonae Toutant and Karlee Andres and juniors Graci Willmarth, Annabelle Wincek, Josi Elmberg and Olivia Larson.

“I believe we will be a strong team in our conference with so many experienced returning players,” Meddaugh said. “These girls are also so excited to be able to play this season. They are working hard to make the most of this year.”

Lake Holcombe opened the season at Bruce on Tuesday and hosts Cornell this upcoming Tuesday.

The Bloomer volleyball team played at Osceola on Thursday, Oct. 31, 2019 in a Division 2 sectional semifinal matchup.

The Bloomer volleyball team hosted a five-team event on Saturday, Oct. 5, 2019 in Bloomer. Stanley-Boyd was among the other teams to participate.

Bloomer's Josie Kostner lunges for a dig during a tournament in Bloomer last season.