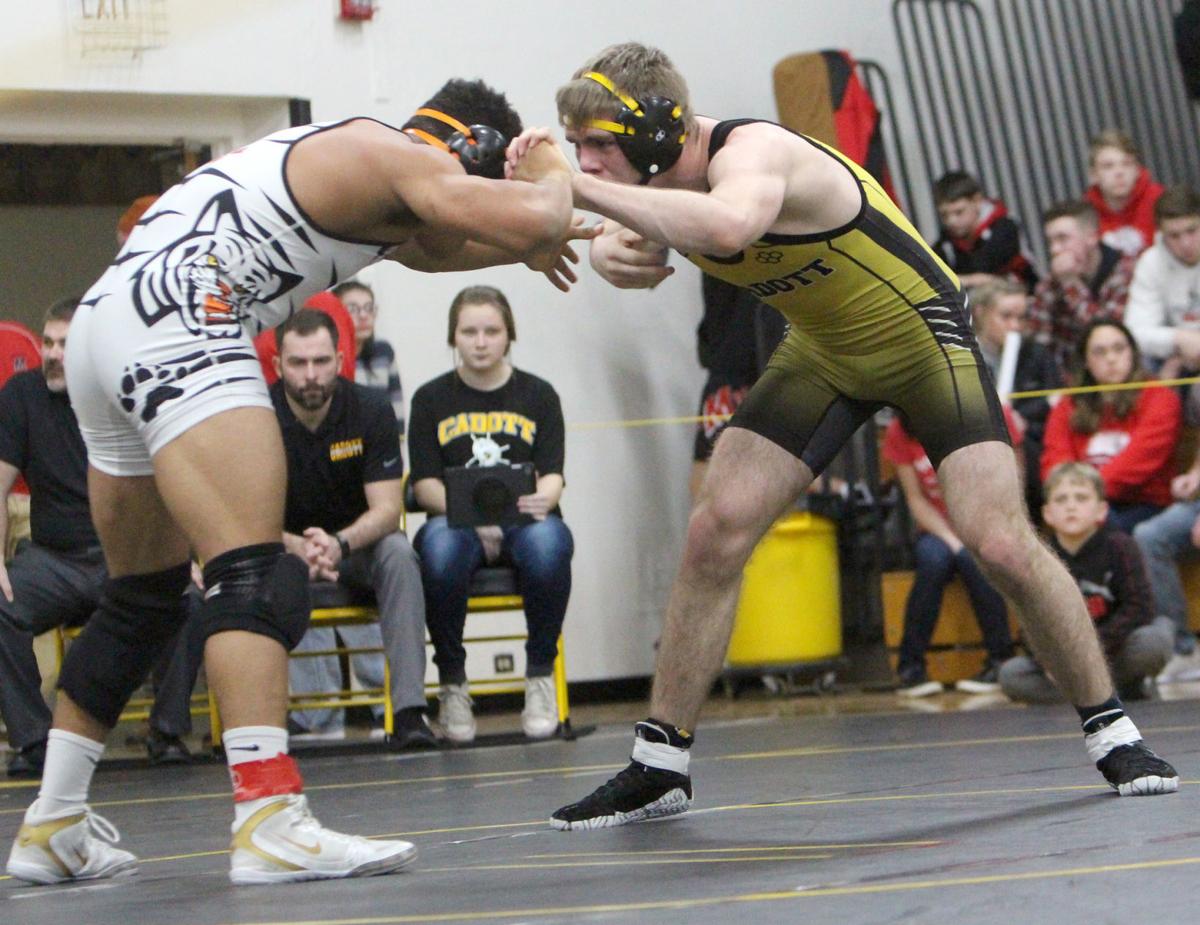 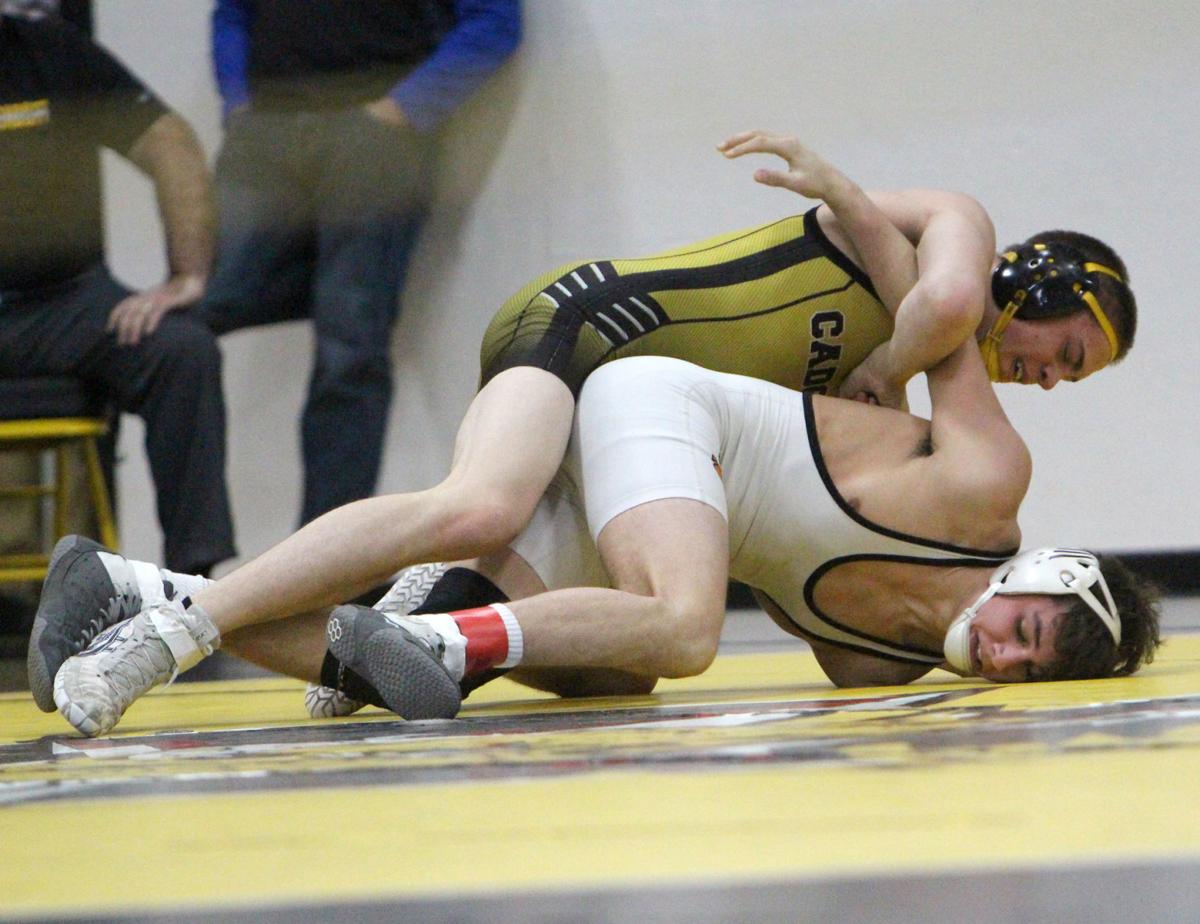 Sometimes it can be hard to make a name for yourself.

Especially when someone before you has done so much.

Cadott senior Steven Pfeiffer and freshman Cole Pfeiffer have found their niche with the Hornets wrestling team this season, carving out their own path of family success that began with their oldest brother, James.

Steven (24-7) won the Division 3 regional championship at 182 pounds last Saturday in Cadott, while Cole finished second at 138 pounds. They are two of 11 Hornets that will be in action this Saturday at individual sectionals in Edgar with eyes focused on advancing to next week’s WIAA State Individual Wrestling Championships in Madison.

The state tournament is a place their older brother was plenty familiar with. James was a four-time placewinner at state and a former Chippewa County Wrestler of the Year as he amassed more pins than anyone in the storied history of the program.

That can be hard to follow up, but Steven and Cole have made their own names this winter.

Steven overcame an early deficit to defeat Stratford’s Raife Smart by an 8-6 decision for the regional championship, an effort that came after a pinfall win over Edgar’s RJ Knetter in the semifinals. Steven struggled to crack the varsity lineup consistently prior to this year with James and University of Minnesota signee Brady Spaeth occupying similar weight classes. But Steven moved up to 182 this year to help the team and showed exactly what he’s capable of.

“He made his own name today, which is great,” Cadott coach Josh Spaeth said of Steven after the regional. “I think if he wrestles like he did today, he’ll have a great shot at getting out of the sectional next week.”

Cole (28-15) earned a pinfall win over Marathon’s Jared Sweno in the 138 semifinals before falling by pin to Stratford’s Elijah Lucio. The year 2020 has been a good one so far for Cole, who has lost just three times since the start of January. Cole capped the regular season with a Cloverbelt Conference championship at 138 and is one of a strong crop of freshman for the Hornets.

“He’s come on strong and doing a lot of good things in the (wrestling) room,” coach Spaeth said of Cole.

Chi-Hi advanced five wrestlers to Saturday’s Division 1 sectional in Wisconsin Rapids by virtue of top-four finishes out of its regional in Hudson.

David Hughes, Daniel Moucha, Ross Kaz, Austin Smith and Taylor Pahl are each moving on, with Hughes, Smith and Pahl each finishing second in their respective weight classes.

Of those five, all but Smith advanced to sectionals a season ago with Kaz taking fourth at 160.

Several Stanley-Boyd/Owen-Withee wrestlers avenged a few losses from earlier in the season into wins during regionals in Eau Claire.

Preston Potaczek (22-5) earned a regional championship at 160 with a pinfall win over Neillsville/Greenwood/Loyal’s Tommy Friemoth, a foe who bested Potaczek by an 8-0 major decision a week earlier for the Cloverbelt Conference championship.

Alexander Nitz advanced to sectionals by taking second at 113 with the key matchup of the day for him coming in the semifinals where earned a 1-0 decision against Neillsville/Greenwood/Loyal’s Jarick Young. Nitz fell to Young by an 8-1 decision in the semifinals at the Cloverbelt Conference championships but turned the tide a week later. Nitz lost the championship match to Spencer/Columbus’ Ashton Ackman by technical fall but defeated Young by rule to take second and advance.

Best and Harmon both reached the 100-win milestone prior to the postseason and will get to chance to add to that after advancing out of regionals along with teammate Bowen Rothbauer.

Best (43-1) won a regional title after a major decision win at 132 advanced him to the championship where he earned a 7-6 decision over Amery’s Jordan Penard. Best was ranked sixth in the state in the final Wisconsin Wrestling Online Division 2 state poll at 132 prior to the postseason with Penard checking in third.

Harmon (12-3) took second at 160, overcoming a championship match loss by 7-2 decision against Saint Croix Central’ Devin Wasley to earn a decision by the same winning score against Baldwin-Woodville’s Bode LaGrander for second. Harmon was ranked 11th in the final poll of the regular season at 160.

Photos from Saturday's Cloverbelt Conference wrestling championships hosted by Stanley-Boyd/Owen-Withee. Cadott and Thorp were among the other…

Photos from Saturday's Cadott wrestling invitational in Cadott. Cornell/Gilman and Thorp were among the additional teams to participate.