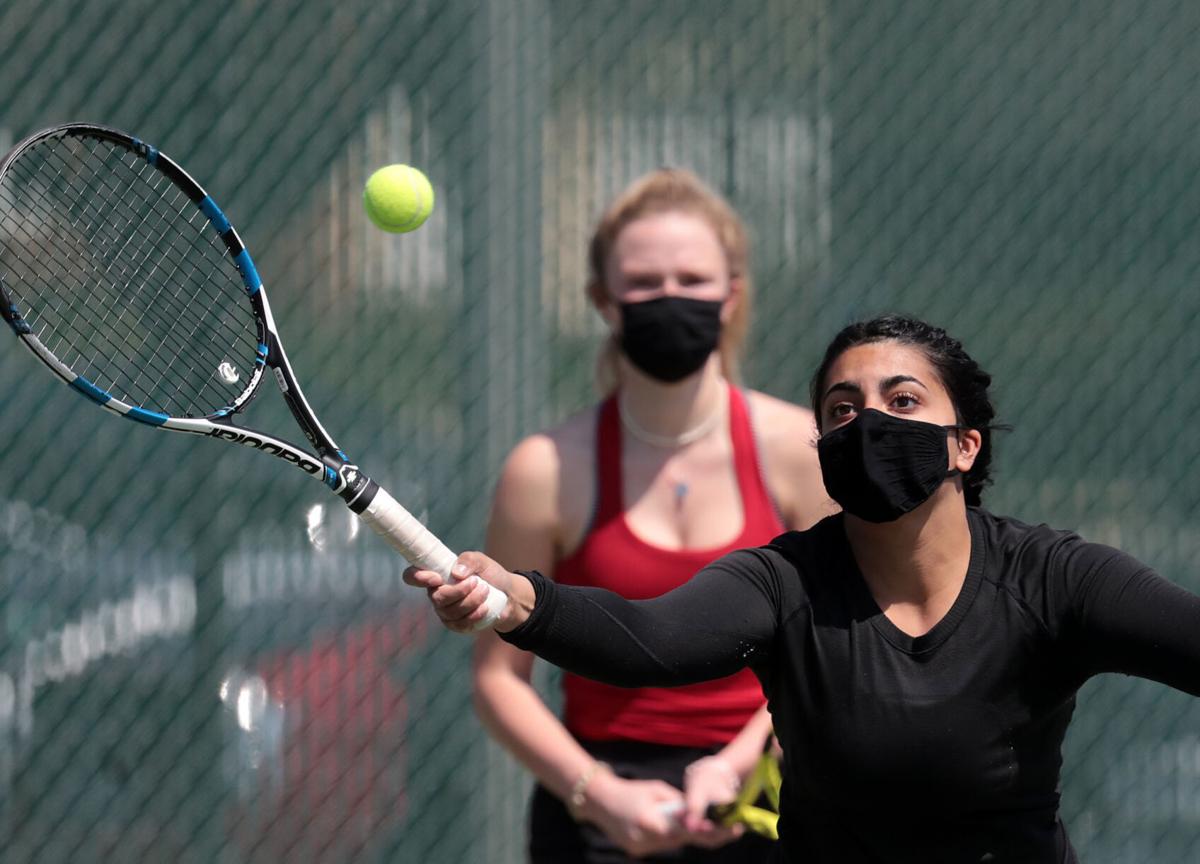 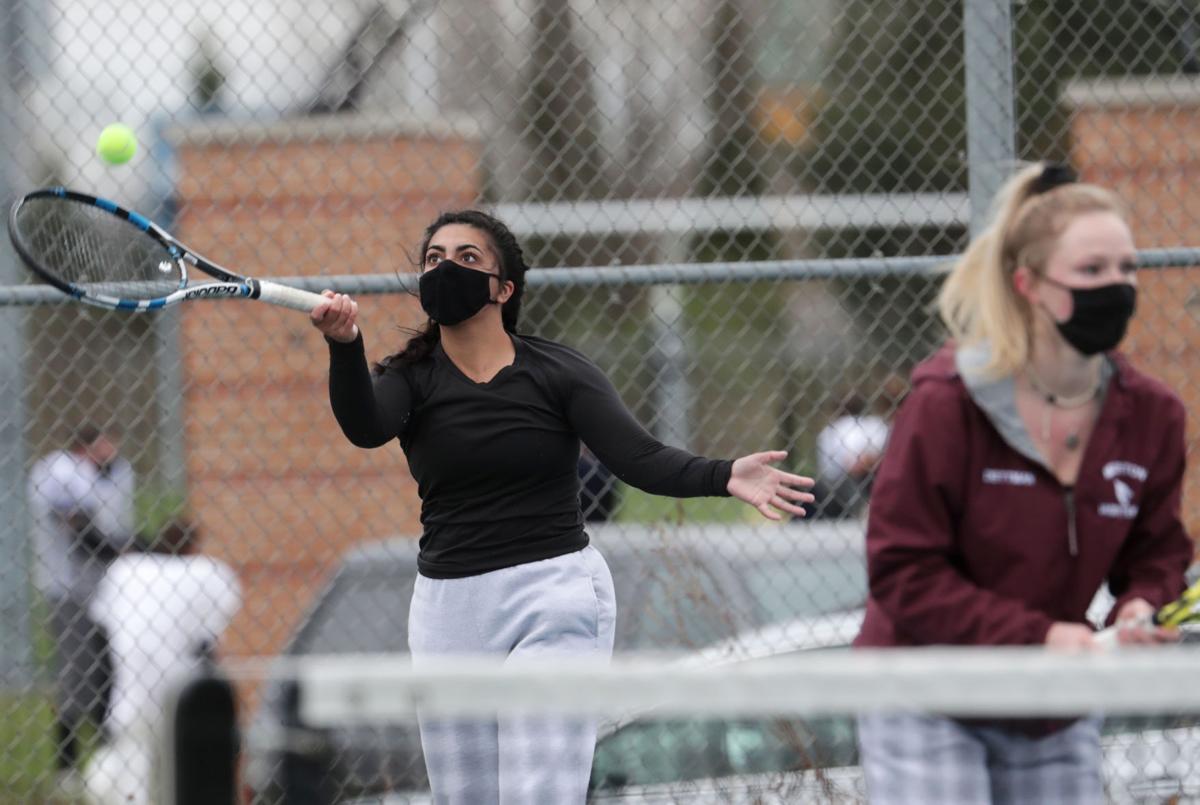 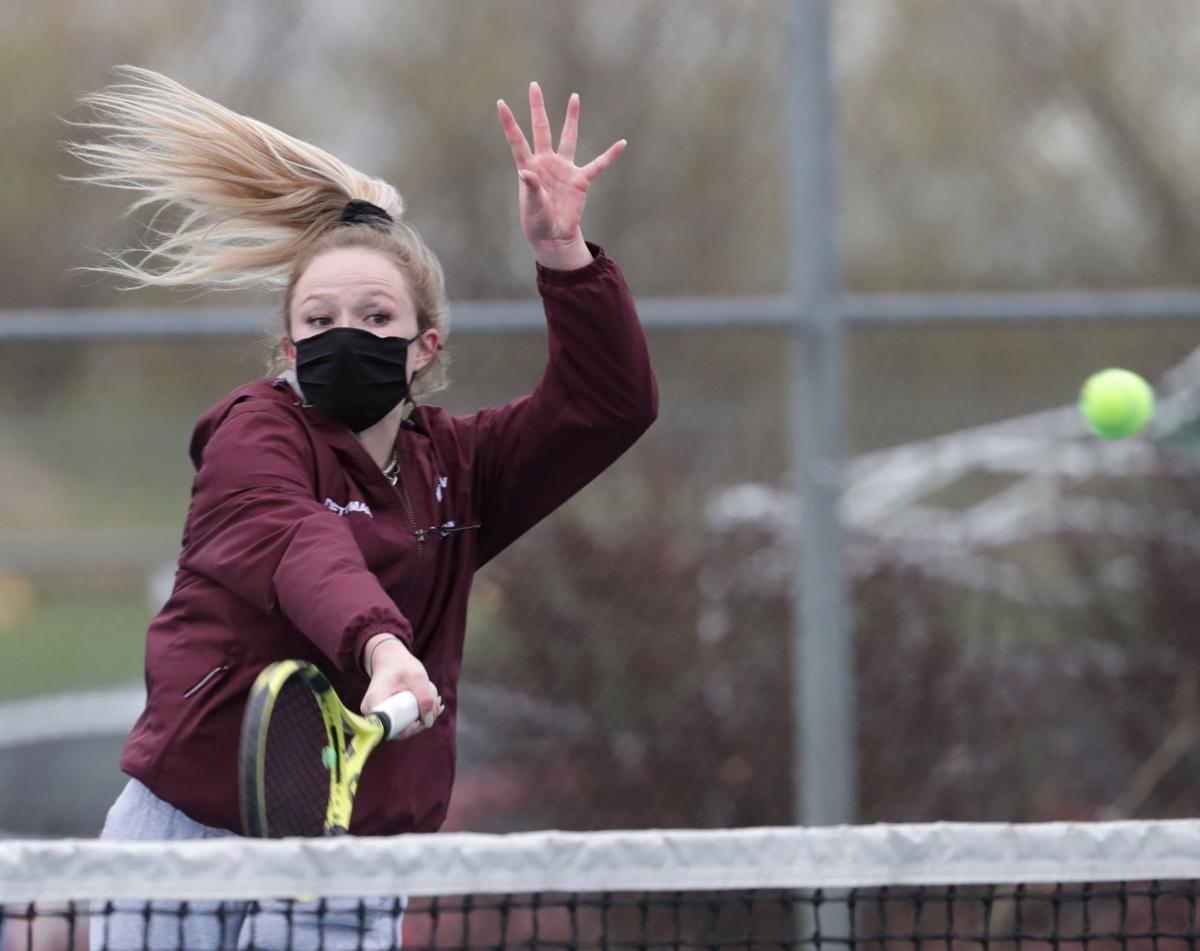 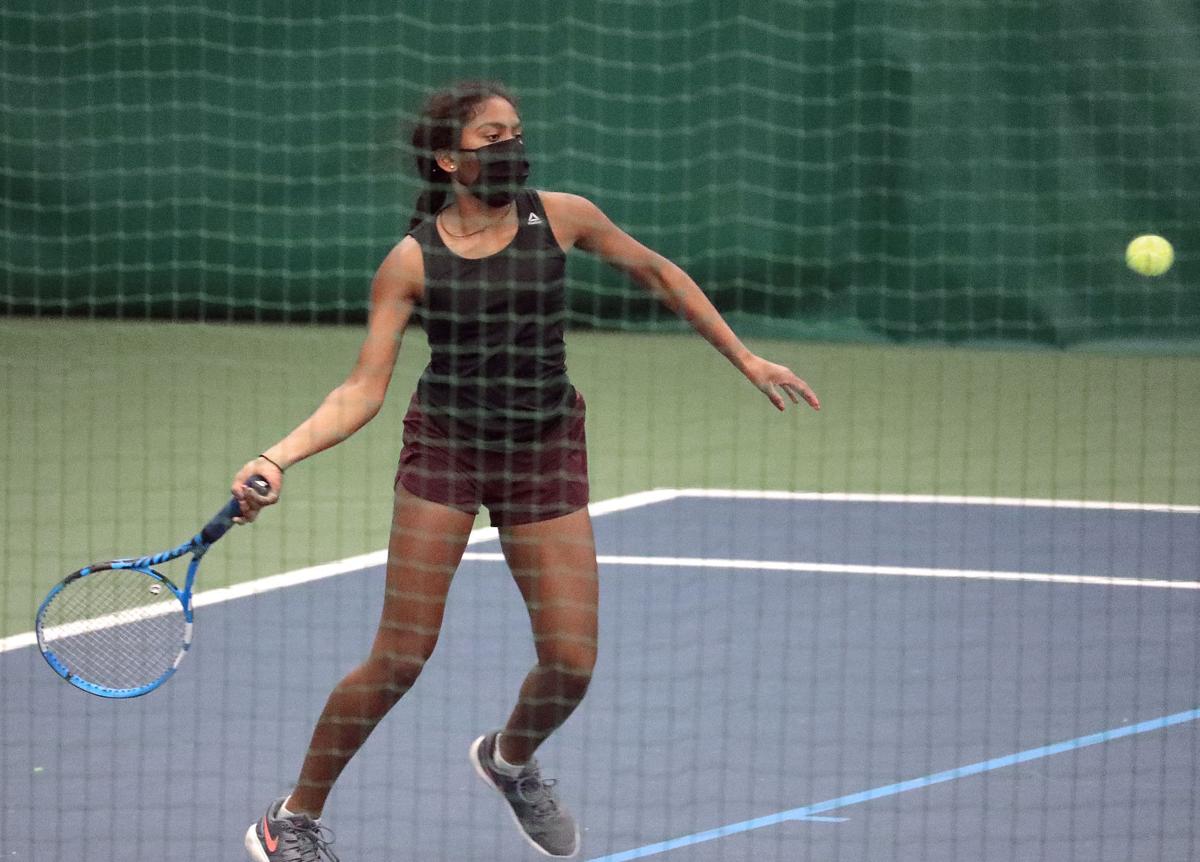 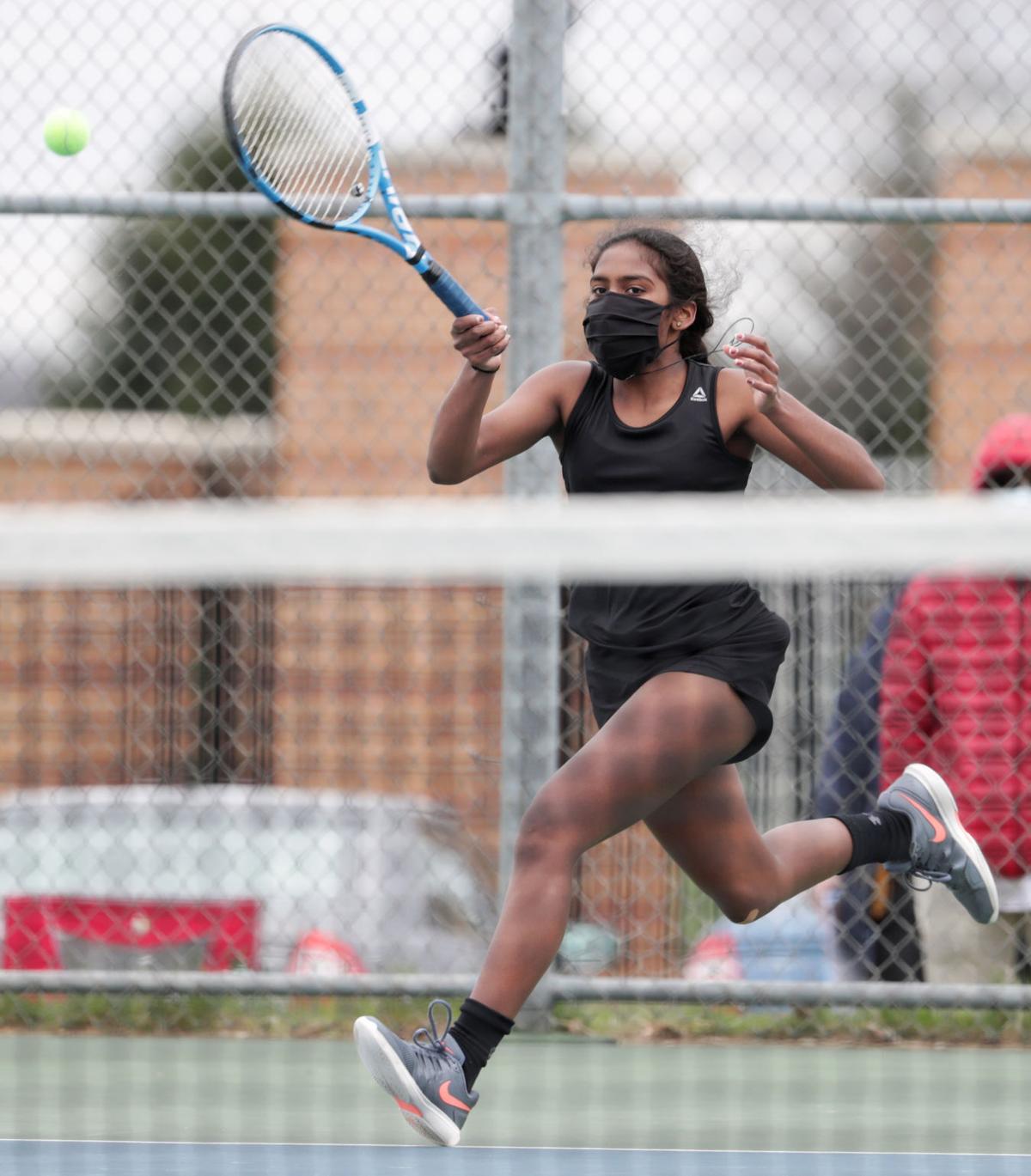 MIDDLETON — After narrowly missing out on a state berth in 2019, the Middleton girls tennis team had to wait until the WIAA’s alternate fall season this spring to do something about it.

But the extra months didn’t decrease the memory of finishing one point behind Madison West in the 2019 sectional final.

“It’s not too far in the past,” Middleton senior Karsen Dettman said. “We still remember clearly. That showed us we can do it — we can get there this year. We pulled out all the stops.”

Middleton won six of the seven flights — including sweeping the three doubles flights — in rolling to a 17-point victory over runner-up Madison West at the WIAA sectional April 14 in Monona.

“I think they were pretty fired up,” Middleton first-year coach Matt Given said. “They really wanted to turn that around. So, all year long that’s been our fuel: ‘Let’s avenge that loss by one point.’ I think that was on their mind the entire time, especially at sectionals, ‘Go out there and take care of business.’”

The Cardinals, whose most recent team state trip was in 2014, earned the second seed and will meet third-seeded Ashwaubenon in a semifinal at the WIAA team state tournament at 11 a.m. Saturday at the Menard Tennis Center in Eau Claire. Top-seeded Neenah faces fourth-seeded Verona, making its most recent appearance since 2002, in the other semifinal at 9 a.m. Saturday.

Middleton defeated Ashwaubenon and Verona and lost to Neenah this season.

“It’s an exciting time for these girls, that’s for sure,” said Given, whose wife is University of Wisconsin women’s tennis coach Kelcy McKenna. “To go from maybe not even having the season and now playing for a state title would be awesome.”

Dettman and her doubles partner Noor Rajpal, also a senior, come off a third-place finish in doubles at last week’s individual state tournament in Lake Geneva.

“I just think, especially the (four) seniors, we are just so happy we get a chance to play this year, even if the season is shorter,” Rajpal said.

Said Dettman: “We are all super thankful we get a season and we are going to make the most of it. It’s our senior season, so, `Leave it all on the court. This is the last time.’ As far as team state goes, the most important thing is supporting each other and, if we have that, I feel we will be successful.”

The Cardinals have a solid singles lineup — freshman Netra Somasundaram at No. 1 (who was fifth at individual state), followed by sophomores Sophia Agapov and Amy Li and junior Bella Conrad.

“I feel we know each other’s strengths, which is important in doubles,” Hujanen said. “Communication is really key.”

Ryan added: “We talk well together and we know where we’re each going to go.”

Dettman and Rajpal, friends since sixth grade who have played much tennis together over the years, agreed they have an unspoken understanding on the court.

“It’s nice because since we’ve played with each other so much, I know exactly what balls she can reach and which balls she can’t,” Dettman said. “We know if the other can get it.”

Dettman’s strong net play leads Rajpal to hit shots that will set up Dettman for volleys.

The Cardinals sharpen their doubles skills playing singles and doubles in practice.

“I love coaching the game of doubles,” Given said. “I feel like the best way to be a good doubles player is to be a good singles player, and know the ins and outs and how to construct a point. I think to be able to give these girls the ability to play both singles and doubles benefits them in the future and now.”

Rajpal added: “He knows how to motivate us to do our best.”

“I feel positivity, especially at the high school level, is huge, allowing the girls to have fun while learning the game at the same time,” Given said.

Dettman has been impressed by her teammates’ work ethic.

“Everybody works hard,” Dettman said. “They show up and they are ready to work.”

It’s made for a memorable season thus far for the Cardinals.

“I think this is the year for us as a team,” Dettman said.